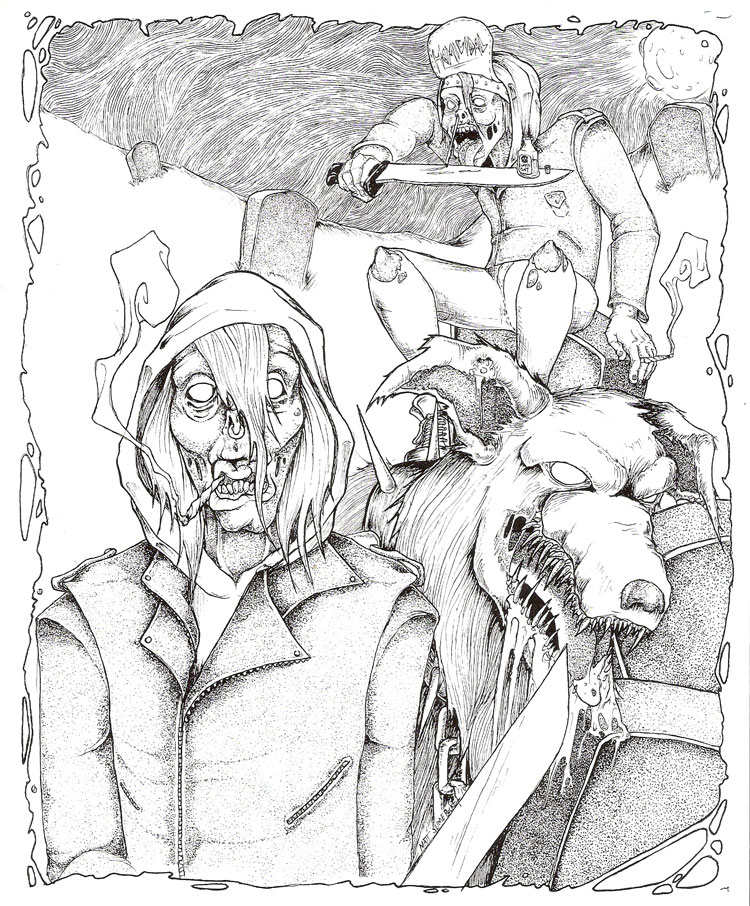 Greetings ghouls and ghoulettes! And welcome to this month’s upchuck of Ectoplasmic Meltdown! Despite the fact that classes are back in session (most non excellent), I’ve been busy at work in my cellar putting together some new monsterpieces for all you sick little gore goblins….I’m going to show you some finished products, and a couple platters of splatter that have been in the works for a decent amount of time now. Also, as a special treat (because it does just happen to be the month of my favorite holiday >:] I think you can figure it out), I have an interview with fellow music and artistic ghoul, Ryan of the almighty SPEWTILATOR! Let’s dive right in to the filth, shall we?

First, I would indeed like to update you on what’s going on in my realm musically! Trasher has been in the studio for a few weeks now, and we are almost finished with our first ever full length album! The album includes 7 songs (5 of which are brand new, 2 of which are older and re-recorded [AND WAY MORE DISGUSTING!]). The album will most likely be released on cassette, and maybe in vinyl format after the cassettes! I’m working on the cover art for this at the moment, and I must say that it will be one of my most vile pieces to date (it will be ready to post on here by the next column!). Also, Coffin Dust is in the writing process as of right now! 2 songs are completely finished, and we will prepare 2 more gruesome pieces before we hit the studio in November to record our second EP! Also, expect to see our first batch of merch in the next couple weeks….

I’ve been very busy over the last month or so, working diligently and disgustingly on some pieces for bands such as Wormfood, Hatred Embraced, and I’ve been able to finish a couple things for my own band Coffin Dust!

First up, we have some gruesome frames that I did for Wormfood! Wormfood are an Oregon based death/grind band, including a member of REEKER (if you don’t know who they are, I suggest you check them the fuck out!). I also did the logo for these guys not so long ago. I must say that I have to give a lot of credit to Putrid, because most of my inspiration for these came from some frames that he did for the almighty Autopsy. I was specifically asked to do the frames in the style that Putrid did his, and I was more than honored not only to do the art, but to be able to do a small amount of work that is straight Putrid influenced/worship. 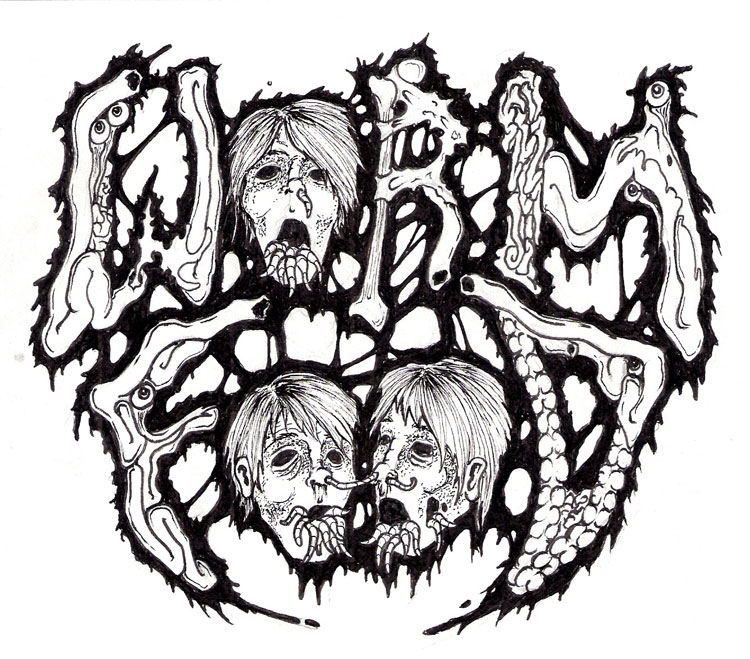 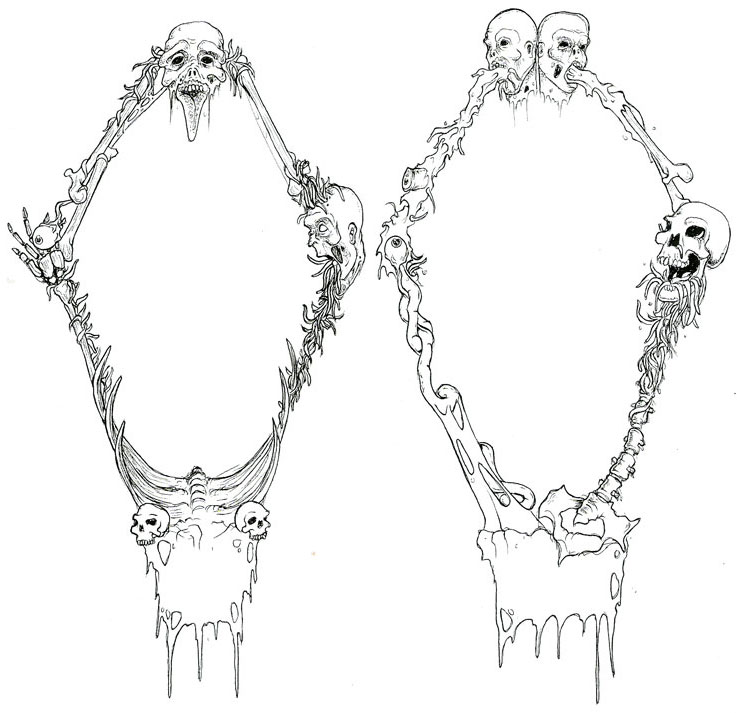 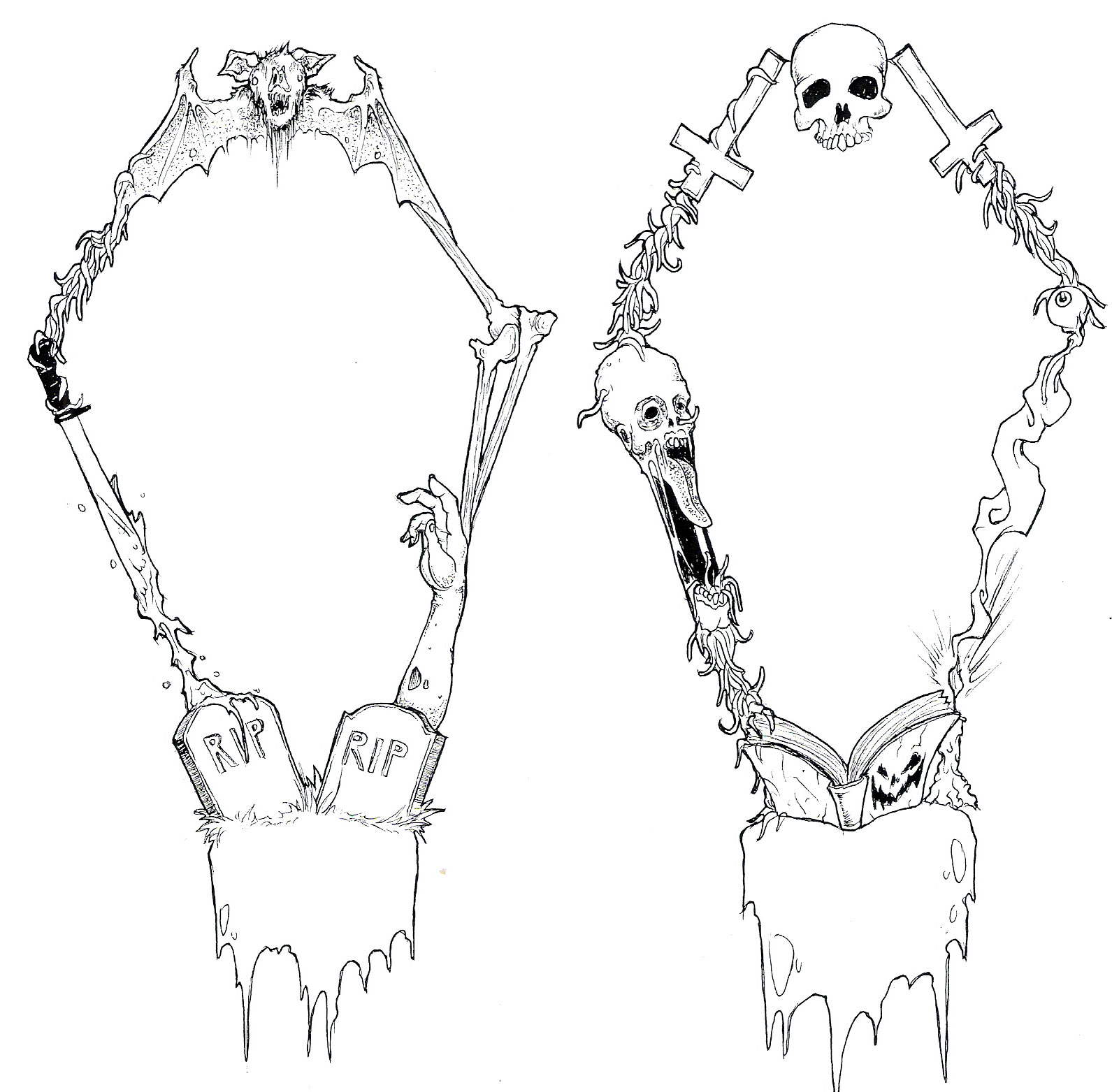 Next on the slab, we have a piece that I did for Death Metal fiends Hatred Embraced from NJ. Ahhhhhh, it feels nice, I haven’t done a blasphemous jesus piece in forever! I got very excited when these young guys asked me to do a piece for them in which Jesus is rotting and hanging from old creepy trees and such! Well anyway, here is the piece. Check these guys out when you get the chance, they’re pretty good! Youth with knowledge of awesome death metal! 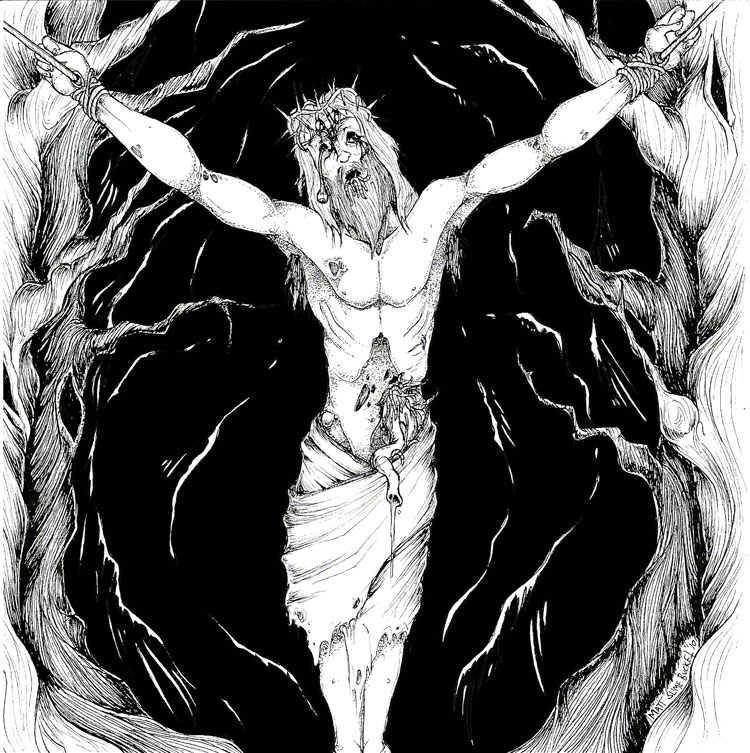 Next on the slab we have some splatterpieces that I’ve finished for my band Coffin Dust. The first is going to be put on a t shirt sometime in the (maybe) not so distant future (“Machete Militia” featured at the top)…I also did a new logo for us! Check it out! 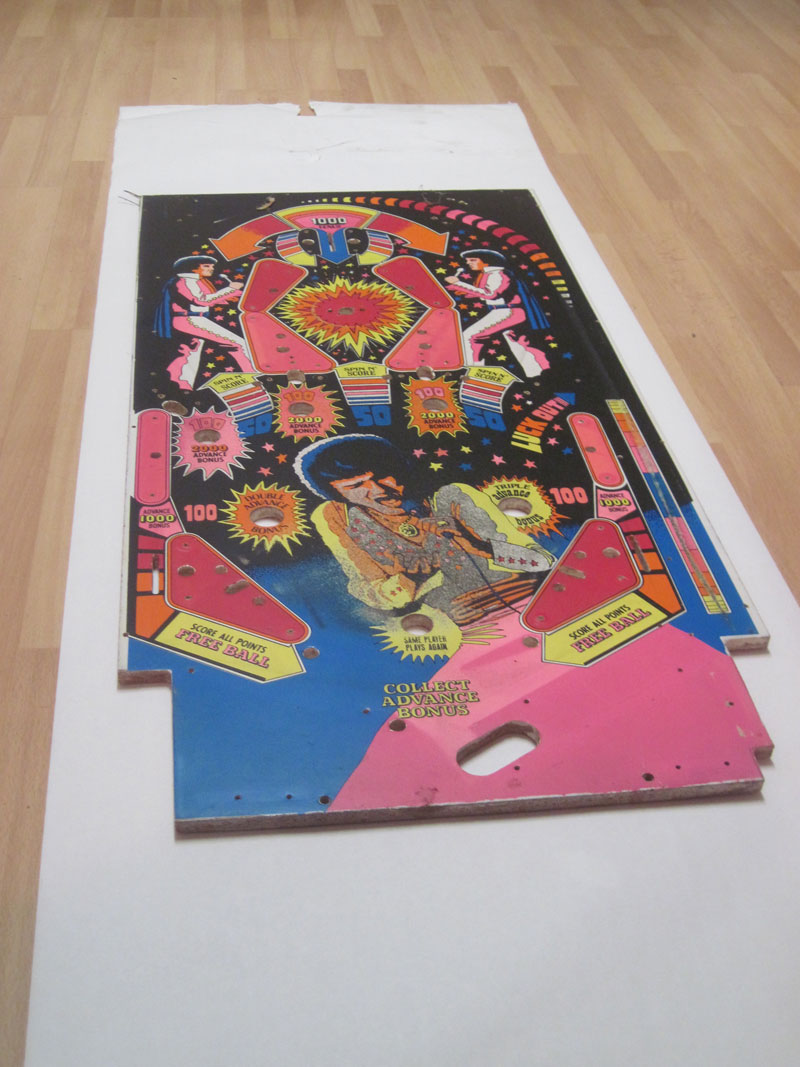 This project I’m about to show you is something in progress, that a friend of mine have been working on for a few months now (I know I’m taking forever Jon, I’M SORRY!). It’s something that I think will be really fucking awesome when it’s done. A very good, and old friend of mine Jon Giancola loves to customize things…mostly action figures and models! Jon has been making his own custom action figures for years now, and he does a great job at them (For my column next month, I’ll be doing an interview with Jon where we’ll go more into detail about his figures and such, so DON’T MISS IT!!!).

Jon one day on an impulse at a local flea market type place called Zern’s, purchased an old pinball table. Jon then decided he would like to customize this silly pinball table depicting a man who looks a lot like Elvis with an afro on it, into a repulsive, slime covered, Ghostbusters themed pinball table! And guess who gets to draw all of the new pieces, and boards and such? THAT’S RIGHT! Yours truly!

What I’ve been doing is tracing the pieces from the table onto paper, drawing within the lines of the pieces, and scanning them into the computer. Jon then takes the outlines that I’ve done, and digitally colors them in photoshop. When all of this is done (it’s a long, strenuous process!), Jon will then print out all of the colored in pieces onto large slabs of vinyl, cut them out, and attach them to the pinball machine. If the first one is as successful as we are hoping, then we plan to make more than one! Totally fucking stoked about this!!!!

Moving on…if you’ve read my last installment, then you all know that I was bestowed the honor recently of doing fartwork for the almighty SPEWTILATOR from Atlanta, GA. I’ve known the guys in Spewtilator for a solid 3 or 4 years now, talking with all of them on the regular, and playing with/partying with them pretty consistently on almost every tour that I’ve done since my first tour with Trasher. I asked Ryan McGee if he’d be interested in doing an interview, and WHADDAYA KNOW!?

Matt BTS: Ryan! Spill your slime dude. How long have you been involved in underground music?

Ryan: I’ve been playing in punk/metal bands for about 10 years now. It went from being a hobby to pretty much being the only thing I know how to do and consuming nearly every waking moment of my life. If I’m not actively thinking about something else then I’ve got a song I’m digging on playing in my head or I’m working out new material/lyrics. I love it man, I don’t think I’ll ever get enough.

Matt BTS: How long have you been involved in artwork?

Ryan: Oh wow man, for as long as I can remember. I used to get in trouble in elementary school for drawing all the time when the teacher was talking or whatever. Still got straight A’s though so that shows what they know haha. I’ve always loved to draw and still do it almost daily whether it be just goofing around or actually working on a piece.

Matt BTS: I know you do a lot involving the scene in Atlanta, can we get a little idea of everything that you do??

Ryan: Aside from playing bass and doing vocals for Spewtilator I also book shows and do artwork for bands.

Ryan: Initially it was a joke between me and Chris, our old drummer, who lived across the street from the house I was renting at the time. We already smoked weed together all the time and I knew he played drums so I asked him if he wanted to start a band for the sole purpose of playing house parties and getting free beer. I had known Rafay for years from playing shows with my other band at the time and asked him if he’d be interested. Somewhere along the way we realized we were pretty good and decided to be a real band. 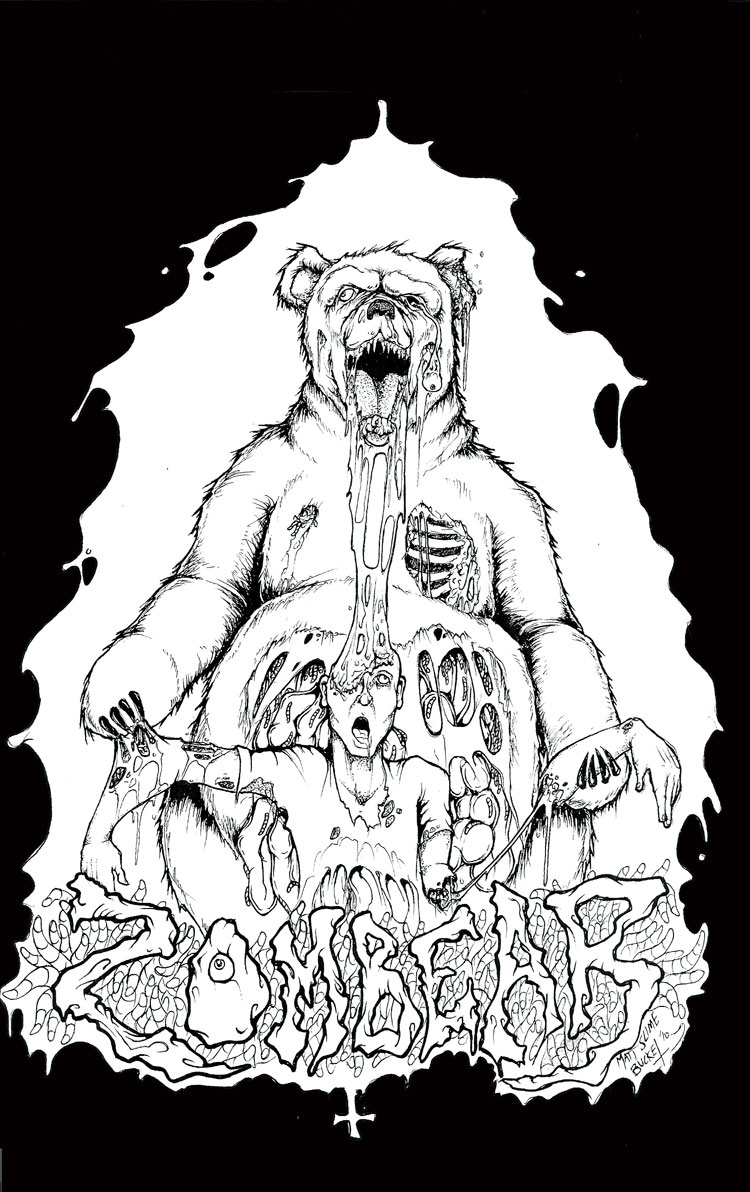 Matt BTS: It’s obvious what your songs are about just from the song titles. “Doob of the Dead”, “Zombear”, and “Altar of Snackrifice” being some of my favorites…How do you come up with the ideas for your song lyrics? Is there one person that does all the main writing in the band? And who writes the music? Does everyone contribute, or is there a main songwriter?

Ryan: The inspiration for subject matter varies, usually I just get really stoned. For “Doob” it was a skit from some comedy show I found online that I can’t remember now… go figure haha. Super Ghouls N Ghosts came from obsessively playing my snes. One of our most recent songs was inspired by this weirdo I work with that said he was going to put a cherokee curse on me for siphoning the water out of the machine he runs when he goes to the bathroom or lunch so it’s called Cherokee Curse. I write all the lyrics though Rafay and a few others give me song title ideas from time to time. The music is about a 50/50 split between Rafay and myself. We usually work on our own and then bring ideas to practice and flesh them out with Jake so he can write drum parts. It’s definitely a collective effort.

Matt BTS: It’s also very obvioius that you guys worship at the unholy gore slathered altar of the almighty Slayer. Who else are you guys really influenced by??

Ryan: Soooooo many bands. Directly, bands like Slayer, Motorhead, Death, Repulsion, Terrorizer, and Morbid Angel. We all listen to so much music though it comes from everywhere. We’ve all been stuck on the new Watain album for a minute… it’s really good.

Matt BTS: What direction do you see Spewtilator going in?

Ryan: Faster. Our newer jams still have plenty of thrash and death metal influence but we’ve incorporated some other stuff to keep it fresh. There’s more grind in the newer stuff and more d beat as well, even some black metal actually. We play what we want to hear so nothing is really off limits as long as it rips and puts across the same vibe that the original songs did.

Matt BTS: What’s next on the chopping slab for the band?

Ryan: Tough question…If we’re talking “of all time” it’d probably be Zeke. Awesome and totally under rated band, they def don’t get the credit they deserve. As for lately I really can’t get enough of Wormrot. Abuse is easily one of the best grind albums of the last decade.

Ryan: Another tough one… “of all time” probably Jaws. Scared the shit out of me when I was little and I’m still weird about going in the ocean to this day. I Drink Your Blood is great as are the first 2 Texas Chainsaw Massacres, Friday the 13th, Zombie, The Stuff, Street Trash, The Burning…there’s just too many to pick one.

Ryan: Thanks a lot for the interview man! Get conjured!

And there you have it fiends!

Thank you once again for directing your vision towards my newest installment of vision vomit, Ectoplasmic Meltdown! Next month I’ll have an interview with my good friend Jon Giancola about his custom figures and models, and I may have another interview to satisfy all you horror metal junkies out there! I also be showing some new pieces that will be finished by the time, and hopefully I will have more pictures of the pinball table to post!!

THIS IS YOUR BRAIN ON GORE!