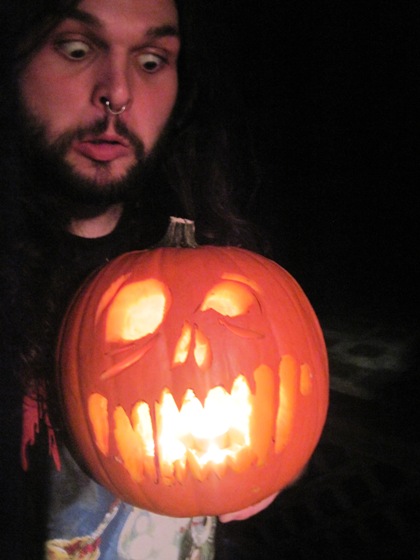 GREETINGS ALL YOU GHOULS AND GHOULETTES! and pardon my vulgarity but HAPPY FUCKING HALLOWEEN!

I decided to hold off on talking about the pinball table and the interview with Jon until next time, and instead decided to do something quick, fun, and relevant to the season, and spirit….I don’t know how many of you heshers out there still get stoked to do this, but i sure do…I decided to carve a sweet pumpkin!

Last night, i stayed up late in the kitchen, listening to the misfits, ate a pizza, and carved a head. Talk about gnarly rituals!

I had a little bit of a tough time getting some of the smaller areas because the pumpkin was super thick, and i guess i didn’t carve it out well enough, but overall, i think it came out pretty rad! I broke two of the little carving knives in the process, and ended up having to carve some of it with a big serrated knife, and it was super hard. But over all, it was alot of fun, and it came out kinda cool! (SEE BOTTOM FOR PUMPKIN CARVING PICS!)

I’ve also been very hard at work on my chopping slab and have been very productive with artwork!

First off, i got the chance to do artwork for Rumpelstiltskin Grinder! Fucking rad as shit metal band from philly! They do a mixture of thrash, black metal, progressive, and some death metal…it’s pretty insane! A definite recommendation for those of you who have never taken a listen!

Shawn asked me to do a demon with a big sword and stuff, so here it is! 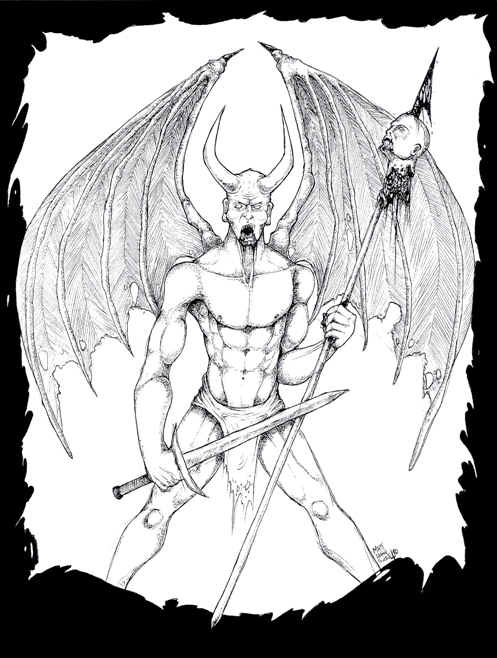 For a while, i’ve thought that Trasher needed a new logo, so i decided to take the second logo we had and scuz it up a little bit…and i puked out this little monstrosity! 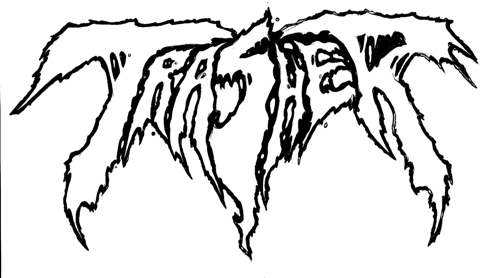 I’ve tried many times to draw a sweet rotting zombie with a guitar, Because I’ve wanted to draw one to get tattooed. I’ve tried many times, and none of them came out as awesome as i was hoping. Until recently i tried again….and i think i hit the nail on the head!

Stoked about how this came out! Once I get a nice set of markers, I’m going to attempt to hand color it…. 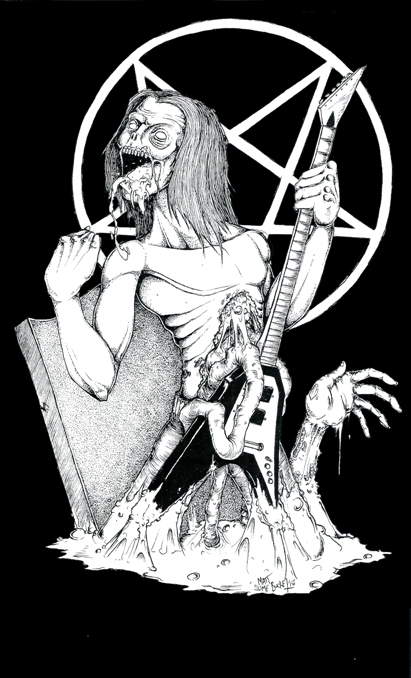 Epic heavy metal band Theophagy asked me to do a piece for their upcoming album…and asked me to do a dude with a catapult launching a rotting peasant. My first time trying to attempt perspective in a while, but i think it came out pretty successful! 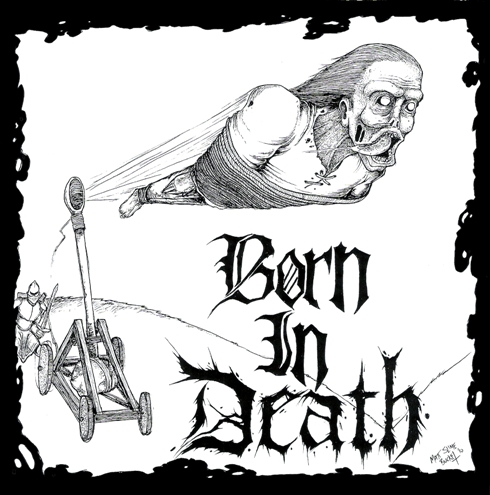 On Top, a band fronted by Jaron Gulino (used to play bass for Trasher, and BSOM), with Ethan Balickc and Austin Perez of Trasher on guitar, and Danny Pisselli from Fisthammer, Coffin Dust, and Vulcan on Drums, is a sleezy, straight out of the 80’s, shredtastic fuck fest of rock. By far one of the biggest breaths of fresh air in a LONG TIME! Check them out HERE. Jaron asked me to take his idea for a new logo and spruce it up for him. I don’t deal much with straight line logos, because i like to free hand most things. I free-handed most of this logo, and this is how it came out

I love it when i get to do artwork for Living Decay. By far my favorite always to do art for….because i always get to make it as disgusting as i want! Rob had told me for a while that they may need some new artwork for a tshirt design….and he usually gives me total freedom to do as i wish. So i decided to do one for their song ACID BAAAAAAAAAATH! haha

One of my favorite things to draw is melt, and so i got really excited to draw a melting head. I spent alot of time and concentration of this piece, and I’m VERY excited about it! I also did a new logo for them 😉 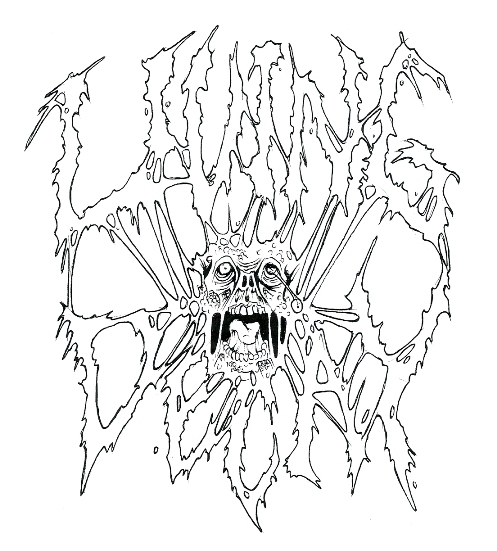 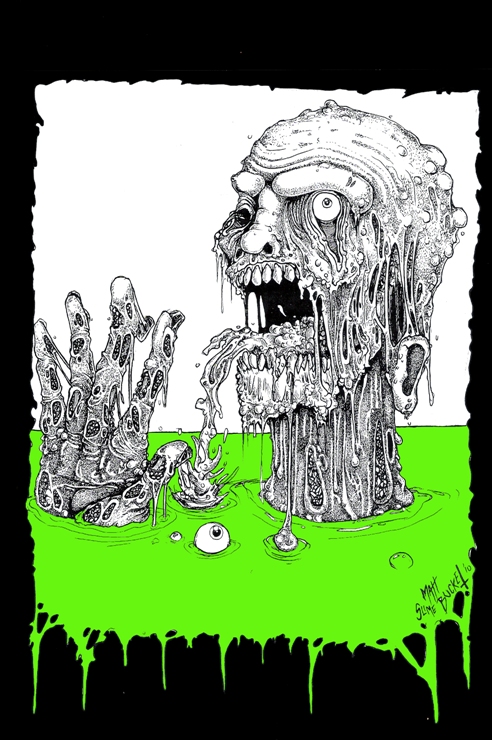 I recently puked out a piece that will most likely be used for a poster that comes with the next Coffin Dust release…It’s an idea that I’ve had for a while that i just recently decided to flesh out on paper!
Worship the bat! 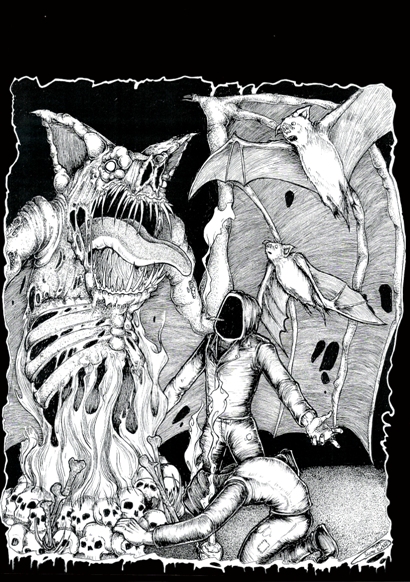 On the music side of things, Coffin Dust just played their first show in philly last weekend, at JR’s bar on 22nd and Passyunk in philly with Abserdo, Deathbeds, and Ramming Speed!. That was by far the most people i’ve ever seen in JR’s! The show was kick ass! We are entering the studio Nov 13th and 14th to record 5 new songs for our new Ep, and then we are gearing up to do our winter weekend tour Dec 3rd to Dec 5th…we’ll be doing the kick off in Downingtown, then we’re bustin our asses down to Atlanta, GA, and then up to Richmond VA. Should be a wild weekend! More details on that to come! 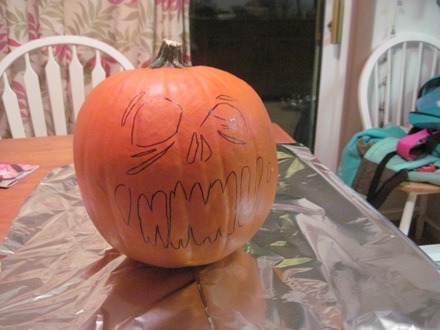 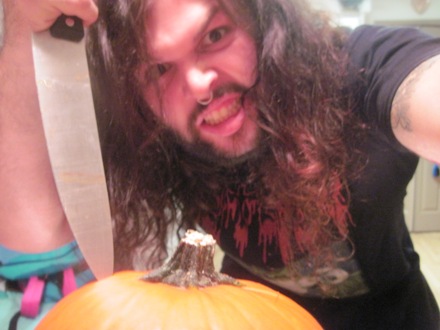 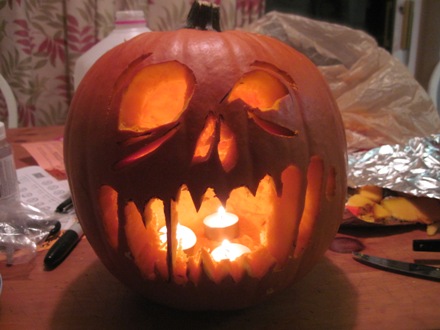 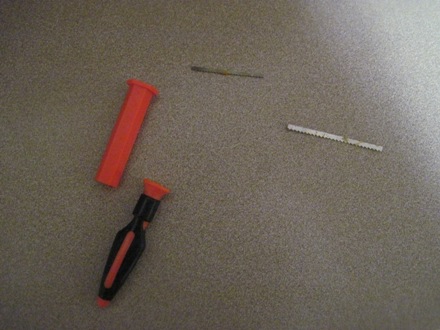