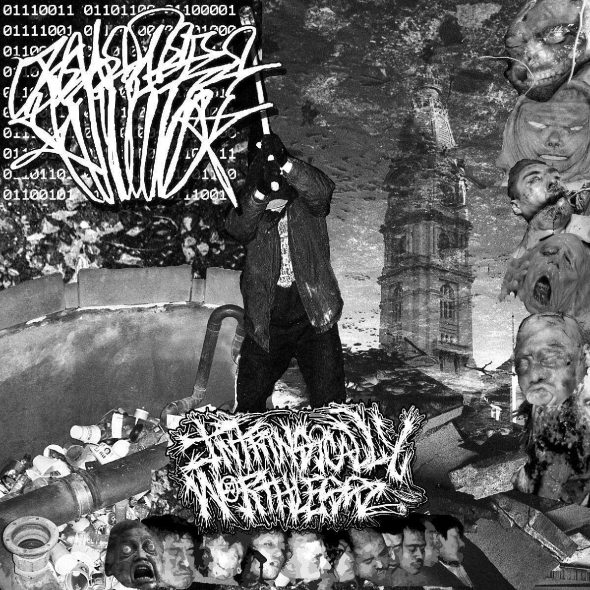 We recently caught up with Beasters, Philly’s own grindcore unit who display a penchant for gnarly skateboarding and even wilder riffs. The recently reformed quintet, headed by founding member Rory Kobzina is preparing to drop a blistering new 7” Ep this Thursday, February 8th, entitled Intrinsically Worthless. Recorded by renowned engineer/producer Colin Marston (Gorguts, Artificial Brain), we’ve got the full advance stream below plus the latest installment of our Creation Formula Interview series as we hone in this forthcoming 7” with vocalist/guitarist Rory Kobzina. Be sure to check out the full stream with links to purchase below!

BTS: You chose to record your new Intrinsically Worthless 7” with Colin Marston at Menegroth, The Thousand Caves Recording Studios in Queens, NY. How did you land on Marston for this project? How far along was the band in the writing process when you got him on board? I’d assume you are keen on some of his previous works?

RK: All the songs were written before we knew who we wanted to work with. We were bouncing around ideas of where to record the 7inch and once the idea of recording with Colin came up it was a no-brainer. We’re huge fans of Gorguts, Krallice, Dysrhythmia and just anything else he’s ever had a part in. For me personally, the first Artificial Brain LP is what won me over as far his production style goes. There’s so much going on in that record and the production style really helps it all come through without being too ear piercing.

BTS: What did the actual recording process look like with Marston? Did you guys track live or separately to a click track? Did you experiment with any new sounds or directions once you hit the studio?

RK: I tracked Ryan’s guitars, John’s bass and my personal guitar tracks along to midi drums and a click myself. Then we re-amped them with Colin. Christian had a couple of weeks to practice along with our pre-recorded guitars, so by the time he got in the studio with Colin he was more than ready and ended up tracking his drums in one night which put us ahead of schedule. Once we had a rough mix, Zach and I tracked vocals the next weekend with our friend A.J. Chiarella. Later that month we went back to Menegroth for mixing and mastering. The overall process of working with Colin went by pretty fast. We didn’t do too much experimentation. Just came into the studio ready and knocked everything out. 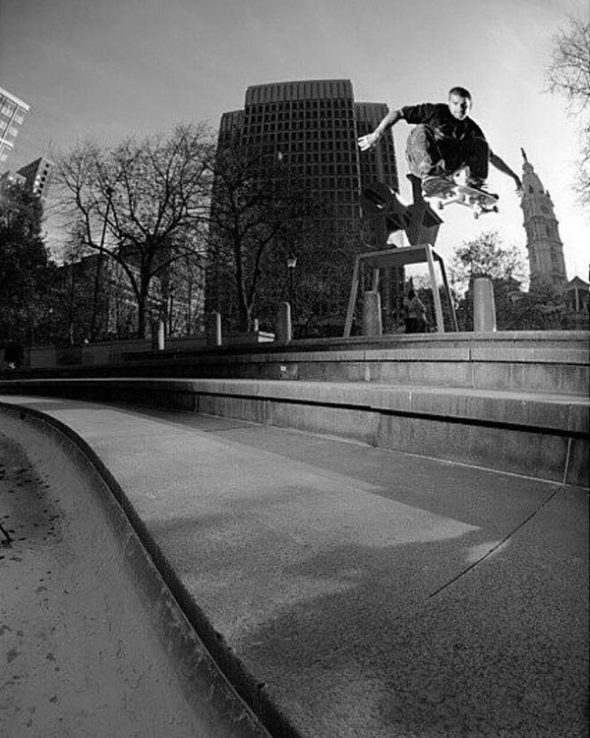 BTS: Grindcore is not the only grind ya’ll get down on. Can you discuss how your skateboarding background relates to your musical efforts? It seems there are several common threads between the skateboarding and grind communities in the US. Would you say that’s true? Do you bring your decks on tour?

RK: A lot of skateboarding culture is surrounded by cheezy Punk, Stoner Rock, and Trap music. Zach and I always sessioned to grind and would talk about how sick it would be to rep skateboarding in grindcore music, as opposed to other music genres skateboarding is usually associated with. I’m not too aware of other bands that make the connection though. We haven’t toured yet but I’m sure we’ll bring our boards with us.

BTS: The song composition on this 7” shows an evolution of musicianship since your previous 2014 effort, Kompartmentalize which to it’s credit, was a totally ripping grindcore release from front to back. Apart from the technically, I hear influences from a wide range of extreme music pools, everything from Grindlink to Napalm Death. You’ve seen a few member shifts over the last several years and remain somewhat spread out in Philly and New York. Can you bring us up to speed on the current players and the ways in which you pooled your collective influences to spark the output of this record?

RK: Beasters started out as 2 piece outfit comprised of Evan Berger on drums and myself on guitar. After the release of Kompartmentalize (The K being an ode to Mortal Kombat) Evan and I recruited Zach as a vocalist. At a certain point, Zach and I were more on the same page musically and we were having trouble working with Evan. It came to the point that working with Evan was so counterproductive that I made the decision to put an end to the lineup and re-create the band into a different lineup with new musicians. I wrote most of the record by myself along with programmed drums and positive reinforcement from Zach. John offered to play bass and convinced Christian to join on drums. They play in another band together called Congenital Death, so once we already had 2/3 of their members and I guess Ryan of Congenital Death wanted in on the action as well. As far as Influences during the writing process of Intrinsically Worthless go:

A lot of the Grindcore on the trippy end of the spectrum like Discordance Axis, Maruta, Noisear as well as a lot of modern grindcore coming out of the Midwest like Mellow Harsher, Deterioration, MDFL and Grin and Bear It. Along with brutal Death Metal bands like Disgorge, Gorgasm and Defeated Sanity. 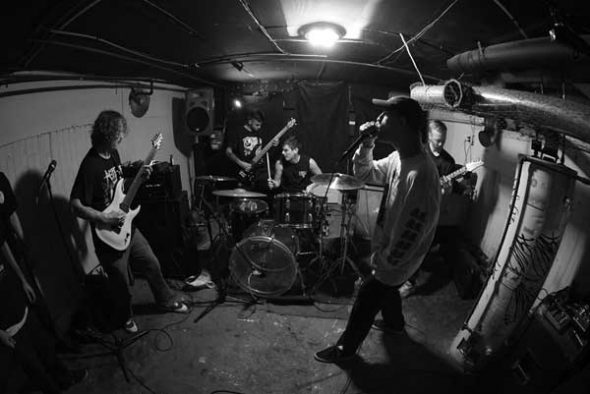 BTS: What did your practice/rehearsal regime look like leading up to the recording? Do you begin crafting the songs as a group or is there someone who ignites the riffs and sends them forth for further development?

RK: All the music was written ahead of time. We would rehearse once a week and would run through the songs over and over again in order to build up stamina. Some changes would be made at practices but everything was pretty concrete before we even started rehearsing as a full band.

BTS: Grindcore is something of niche genre, but even so, there are widely varying interpretations of what qualifies as ‘grind’ and what is an ‘authentic grindcore sound’. Personally, I prefer a more natural sounding recording vs a trigger-happy smattering of cheap, one-dimensional samples. I think ‘Intrinsically Worthless’ really succeeds in the more natural-sounding arena. The production is most definitely modern and aptly applied to the rollercoaster of riffs and blasts, with a big, punchy sound, and doesn’t suffer from a preponderance shitty trigger sounds. How much time, thought, and effort did you put into the crafting of the overall feel of the record?

RK: It’s fun to be an elitist and shit on how other bands choose to grind. But honestly, I have pretty loose qualifications of what can be considered grind. Usually, if a band says they’re grindcore then I’ll consider them grindcore. As far as sound goes, the more open sounded a record is, the more I’m usually into it. There’s a lot of grindcore coming out now that sounds devastating when you’re scrolling through Youtube. But then if you sit down and listen to the same music on a proper stereo it just doesn’t hold up. When putting this record together I wanted to get a Reign in Blood feel. Proper production that lets the music convey the brutality instead of compressed production that distorts your speakers in an effort to compensate for lame songs and poor performance.

RK: The newsreel sample in the beginning of the record is actually fake. Zach and I collaborated with our friend Miscued. For the intro and he put that together. Other samples used in the intro are lifted from a Prozac commercial, a tour of an insane asylum, an exorcism and a news report of a school shooter on SSRIs in the late 90’s. The intro is placed right before the song ‘Neurotic Torture’ which is musically a hyperventilating panic attack. Another Sample is before the song ‘Primitive Content’. That sample is taken from ‘Eastern Exposure 3’, a classic east coast skate video and lyrically that song is about East Coast skateboarding. 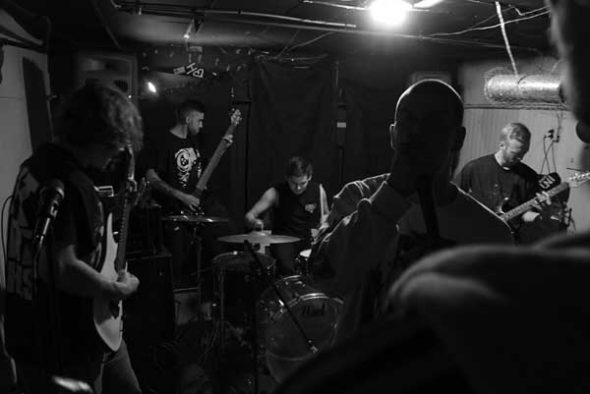 BTS: And while we’re on the topic- Who created the artwork for the record and how intertwined are the lyrical and visual elements?

RK: Zach and I collaborated with Miscued. for the album cover along with the intro. Johnathan Rentschler contributed a lot of original photographs that we used for the collage. The photos were taken during the deconstruction of John F. Kennedy Plaza (Love Park). The 7inch cover and the packaging of the record is misanthropic and chaotic. It’s kind of post-modern but it works. Once everything was finished up I asked Miscued. how he thought it looked and he said, “It looks how the music sounds” so that was good enough for me.

BTS: What’s up next for Bea$ters? Plans to hit the road?

We’ll be recording with Colin Marston again in July. As far as shows go, we have some killer shows coming up with our friends In Durian, Bandit, Die Choking, Chepang, Organ Dealer, and Deterioration. People can follow us on Instagram @beastersgrind if they want to stay in the loop. 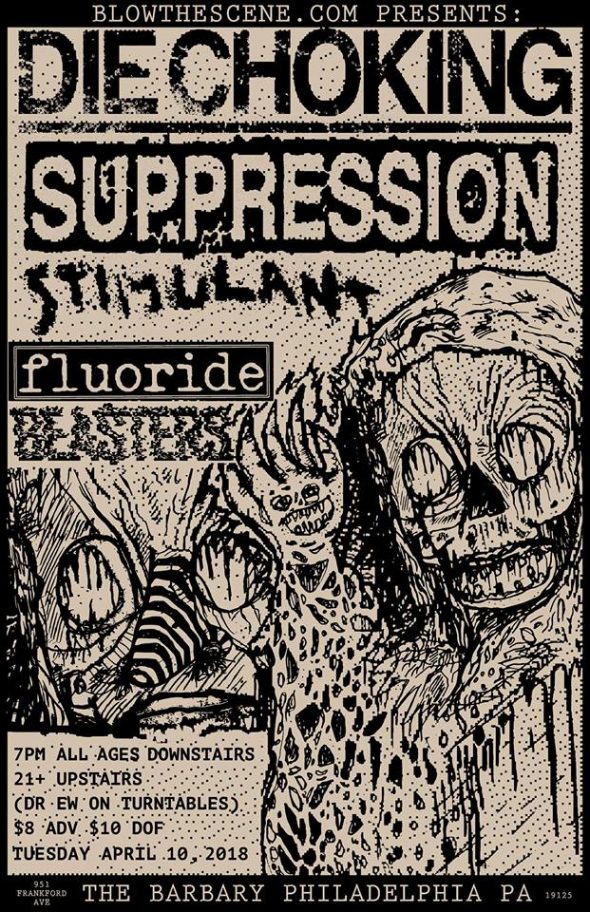