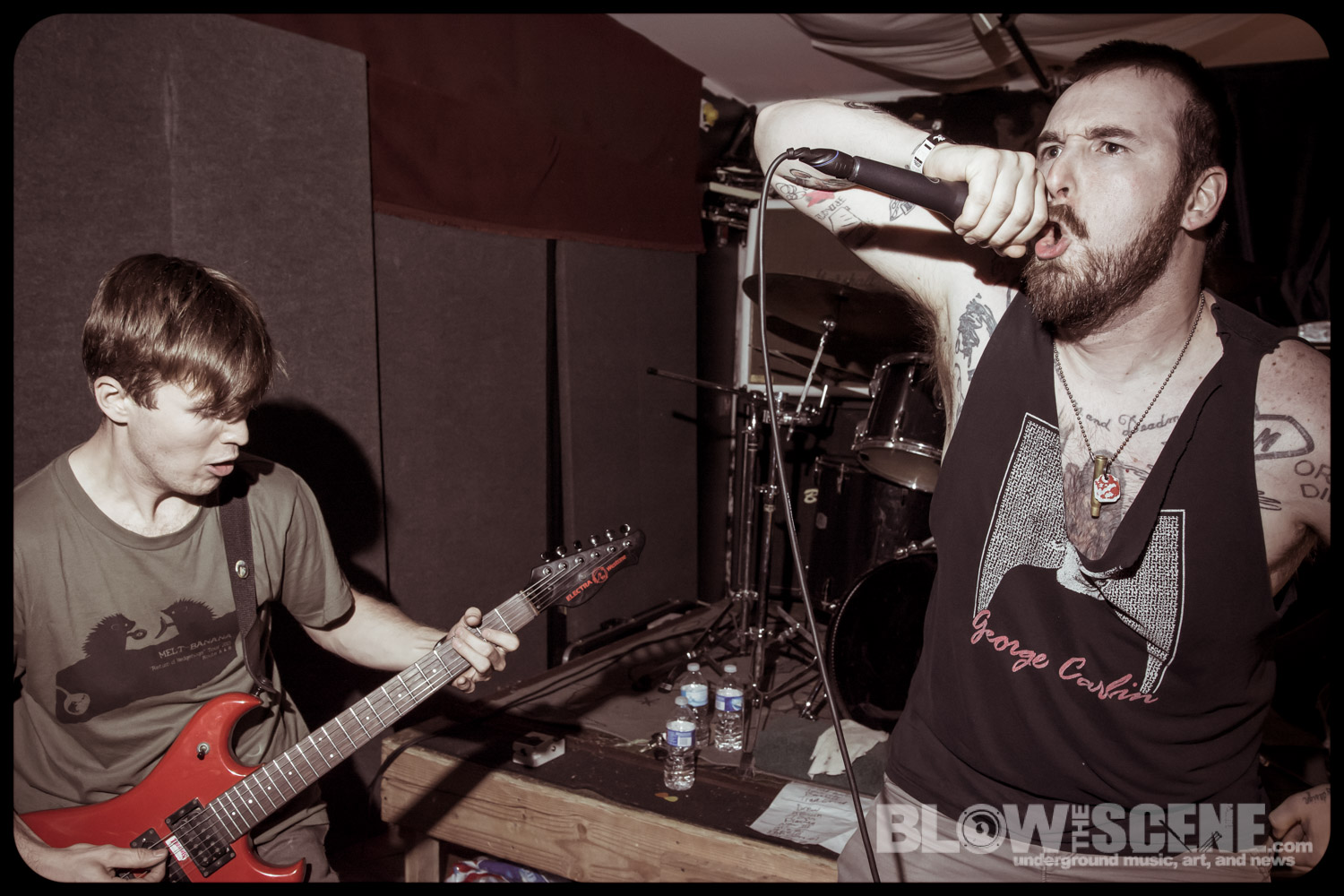 Cleveland, OH’s explosive, grindy, hardcore punk-infused powerviolence unit Grin And Bear It, have been one of our favorite bands at BlowTheScene.com since the inception of our publication. Beginning with drummer Drew Vaccaro‘s single-foot blasts, rolls, and digs into his drum cuts that cause the most hardened musical enthusiasts to crack grins from ear to ear. The drumming is more than complimented by guitar shredding that can best be described as “next level.” We’re not talking about silly solos either or the type of playing the comes from sheerly studying the classics. Guitarist Kevin Greulich attacks exotic chord mutations with a physical rigor and veracity that causes those in eyesight to tap the person next them like ‘You see this fucking dude on guitar?’

The vocals of Grin And Bear It are as extreme as the musical output, seeing singer Rich Pauley deliver a range that seems implausible from the lowest death metal rumbles to highs so high, they are reminiscent of Despise You‘s Cynthia Nishi. Despite the band’s domination of the field, you won’t find ego or narcissism. Rather, a witty, humourous, very self-aware take on a genre that has exploded in popularity in recent years with few torch bearers to lead the pack. 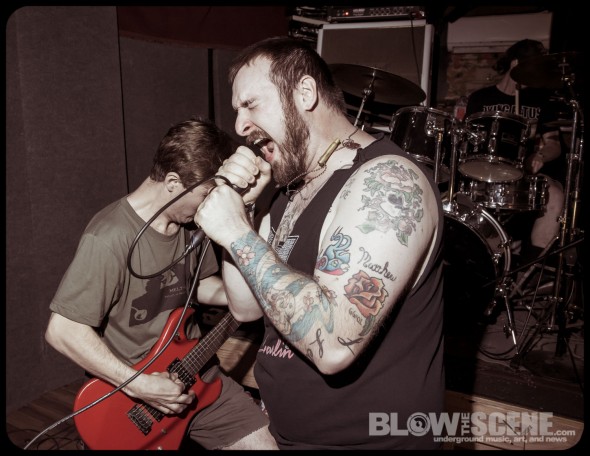 Let’s not mince words- Grin And Bear It are the quintessential powerviolence band. So it is with great pleasure that we not only deliver a new feature interview with Rich, but we also get to premiere a never-before-heard demo track that will be featured on the band’s untitled, and unreleased debut full-length that is being prepared after 7 years of splits and EP releases with the likes of God’s America, Masakari and more. The World-premiere of song, ‘Tom’ is featured below the interview and was recorded with Andy Nelson (Weekend Nachos, Like Rats) at Bricktop Studios in Chicago as was the remaining unreleased material.

Joshua BTS: I really enjoyed the new demo material towards the next LP by Grin And Bear It. Where did you record it? And Who’ll be doing the final mixing and mastering?

Rich Pauley: Thank you! We recorded at Bricktop in Chicago with Andy Nelson. He was excellent to work with, kept us on track, had great input and was fun to be around. It’s still up in the air who will master the recordings but we are leaning towards AudioSiege.

Joshua BTS: The Grin and Bear It live show is one of the best in the genre right now- how much importance do you put into your live show? And what tour plans do you have for the foreseeable future?

Rich Pauley: We all find it very important because regardless of the genre of music you play, as a spectator, you can tell who’s really good when you watch it live. You can tell who’s pouring it out and we all do, every time. The three of us all feel like vastly different people before, during and after a set. If I don’t feel like I’m close to dying when I play, I don’t feel I’ve given my all.

There aren’t any tour plans as of right now. That’ll come with the release of the record. Performances will be limited until then. We are playing Brain Hemorrhage Records Fest in Virginia July 8th with a lot of great bands. And possibly Discontent Fest July 22nd in Illinois with another list of great bands. 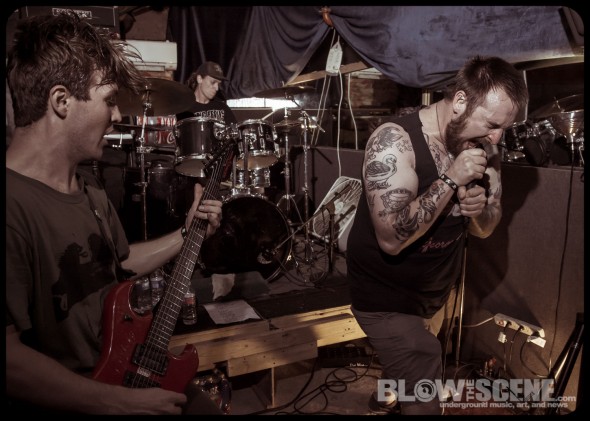 Joshua BTS: Grin and Bear It has been one of my favorite powerviolence bands consistently since your early demo days and think you personify the genre quite well in its modern form. The term often gets thrown around loosely- but what exactly is powerviolence to you?

Rich Pauley: What it WAS to me and what it is to me now are two entirely different things. What it WAS was fast, mean and heavy with a liiiiiitttlle bit of silliness and sarcasm thrown in the mix. There were bands that didn’t play fast a lot but in my eyes, the fast bands were it!

Now, you have what happens in every genre of punk and in a sense, power violence is today’s “tough guy” hardcore. With cliques, elitism, the whole nine yards. Which is fine. Most of the bands are still sick (as well as the tough guy shit) and the cliques/elitism gives us more to write about. Lyrically and musically. There’s musical parts in some of our songs that are there just to poke fun at all of that.

Really, we don’t pigeonhole ourselves as a powerviolence band. We have so many sounds coming together to make up our songs that it’s hard to do that. Whether it’s hardcore, grind, power violence, death metal etc, it’s all there. I think we meld it all pretty well without it being hodgepodgey or contrived while keeping up the speed at the same time. Bands try so hard to fit into a mold or genre that they forget to write good songs. Worst of all, people don’t seem to mind. It’s not power violence anymore, it’s just “powerviolence”.

At the end of the day, we play fast. 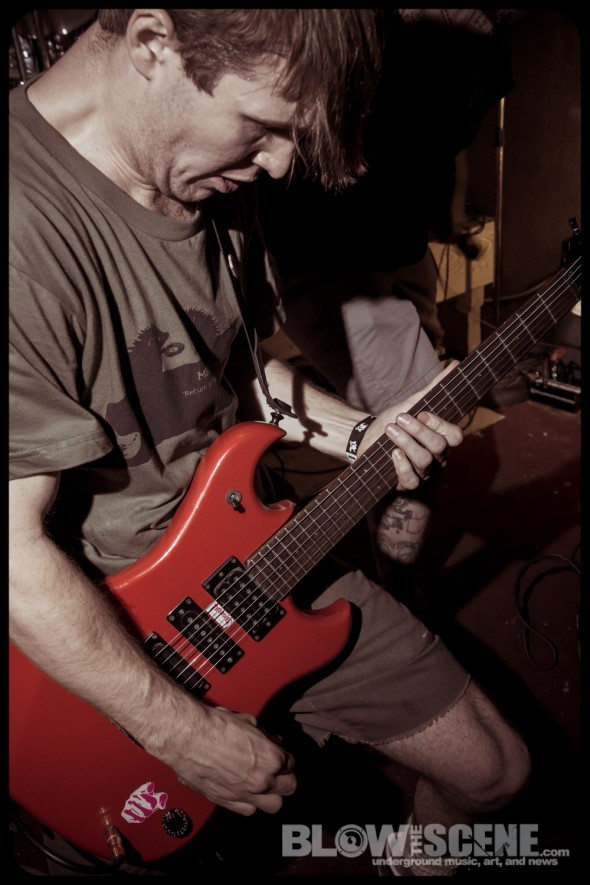 Joshua BTS: I’ve seen Drew drum in Grin And Bear It before live many times- but I still have to comment on the speed of those single-foot blasts. Impressive. Do you track drums live or separately from the guitar tracking? Does Drew use a metronome?

Rich Pauley: I think it’s a travesty Drew isn’t considered one of the best all around drummers in aggressive music. He does it all and plays for a number of great bands!

We track everything live. He doesn’t use anything special. 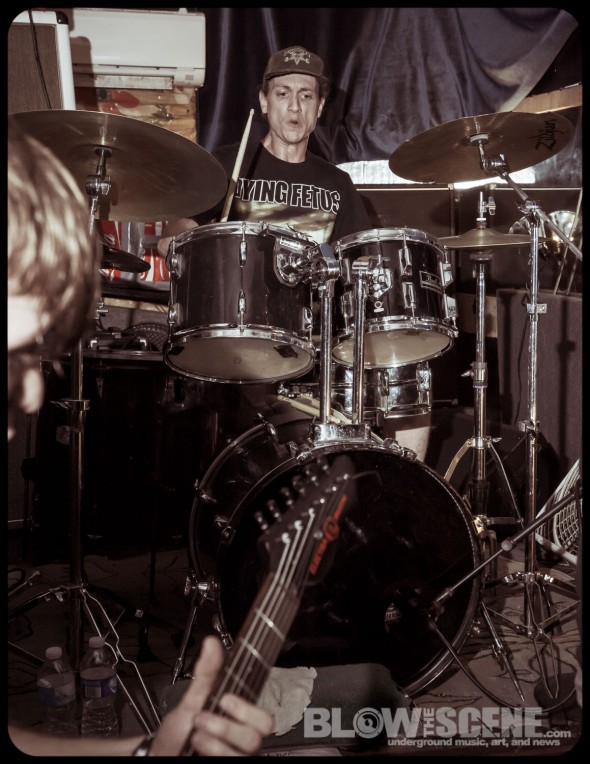 Joshua BTS: Got to comment on Kevin’s speed and approach on guitar as well. I’ve had the pleasure of seeing many incredibly fast guitar players over the years, but the sheer brutality and blurring quality of Kevin’s approach is near unparalleled. Do you find it a challenge to capture the live energy of his riffs in the studio settings?

Rich Pauley: I agree with that, wholeheartedly. He is an excellent player and his approach to fast music is very pure. When he shows me riffs for new songs I’m thinking “How the fuck are you going to play that in a song and fold it into something cohesively?” He always does it really well and I have no clue how. It’s so crazy to me that it’ll make me laugh at times.
I think what he does comes through really well in the studio and he doesn’t do too much different from what he would do live.

Joshua BTS: Northern Ohio in Mid February, not exactly a tourist hotspot- But what should like-minded folk be sure to check out in the area that happen to be passing through?

Rich Pauley: There are always shows going on in Cleveland. Every day. I’d recommend Now That’s Class to anyone passing through. Whether it’s an awesome show (that one of Drew’s bands would most likely be playing), El Rey’s Papusas, Mr. California‘s happy hour, gay new wave night, DJs, comedy shows….never a dull night at Now That’s Class.

Joshua BTS: This new material you are building will be towards your first LP and 8th overall in release in 7 years following splits with Masakari, God’s America, MDLF, Youth Violence and more..

Rich Pauley: Yes, finally our first LP in 7 years as a band. It had been in our plans before but every time, we just ended up doing splits. These songs are the best of what we’ve done in our opinion. Every song belongs together on this one release. That’s how we wrote it. It was deliberate. Before this we just wrote songs and threw them together on whatever we were asked to do. Each release has it’s own unique feel but this one is our peak. We are really excited about it! 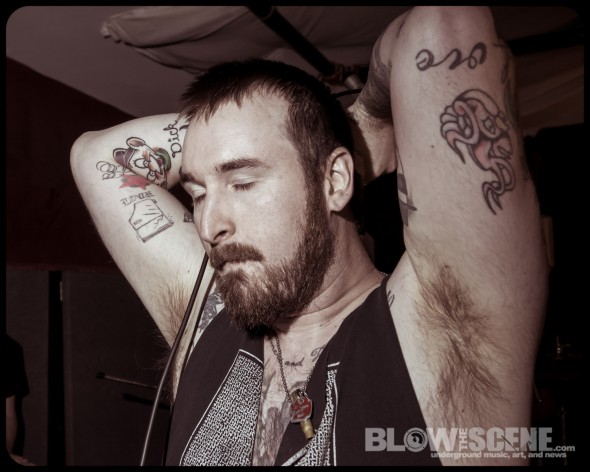 Joshua BTS: What bands would we find in your current playlist?

I also listen to hours and hours of wrestling podcasts.

Joshua BTS: We’re going to premiere the demo version of the new track “Tom” today. Can you tell us a little about this track specifically- How it was written and the lyrical focus?

Rich Pauley: It was written as we usually write. Kevin brings guitar parts, Drew and Kevin throw it together. I give input and then throw some lyrics against the wall to see what sticks. This one is about my personal opinion about the Influenza Vaccination. Before anyone cringes really hard, it’s not a general “fuck vaccines” like you’re thinking. It’s not to be taken too seriously. It’s just my opinion on how it’s presented to the masses of people who just accept it blindly.

My way of questioning it and poking fun at it’s “effectiveness” in healthy people. 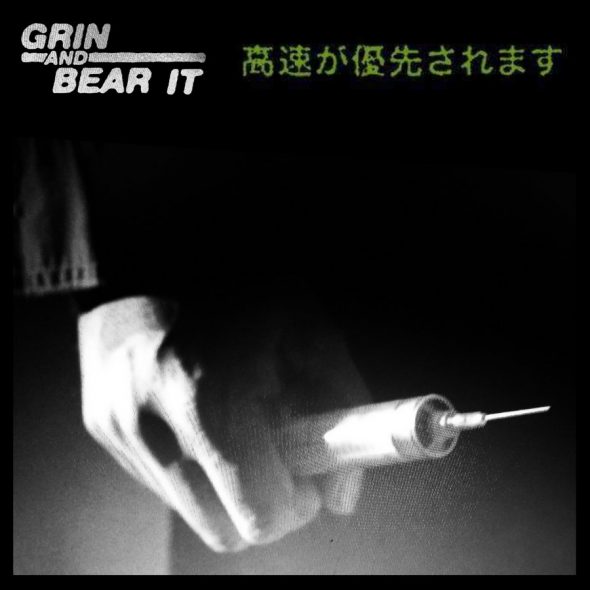 More Grin And Bear It music available at bandcamp