The artist featured in this installment of Old Soul is one of my all time favorite vocalists. Everything about this woman is unique: her look, her voice, her lyrics. She’s had a big influence on many artists that came after her. Her voice has power. Not only are her vocal skills technically proficient, she does it seemingly effortlessly and with unbounded soul. Others may try to mimic, but there is only one Chaka Khan.

Chaka Khan was born Yvette Marie Stevens in Chicago, Illinois on March 23, 1953 and was the oldest of five children. Chaka Khan was not the only child in her family with musical talent; her sister Yvonne also became a successful singer under the name Taka Boom, and her only brother Mark Stevens, formed a funk group called Aurra. Yvette and Yvonne formed their first group in 1964 called The Crystalettes. The two sisters formed another musical group called the Shades of Black after joining the Affro-Arts Theater in 1968. The Affro-Arts Theater was also the place where Yvette became Chaka. A Yoruba priest from Africa gave her the name Chaka Adunne AduffeYemoja Hodarhi Karifi during a naming ceremony in 1969. Chaka also joined the Black Panther Party that year and became head of their Free Breakfast Program for kids in Chicago’s South Side. 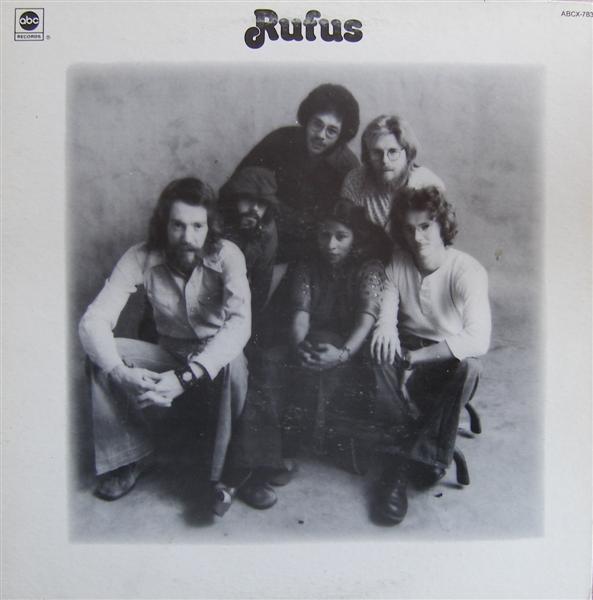 Chaka would become Chaka Khan in 1970 when she married Indian bassist Hassan Khan, and she kept the name as her stage name after the marriage ended. For a short time, Chaka sang for Hassan’s band Lyfe. After that, she replaced Baby Huey in the group called The Baby Sitters before the band broke up in 1971. That same year, Chaka Khan’s friend Paulette McWilliams asked Chaka to take her spot in a band called Ask Rufus. Ask Rufus was formed by former members of a band called The American Breed who had a top ten hit in 1967 for a song called “Bend Me, Shape Me.” After that they had some musician changes and reemerged in 1969 under the name Smoke, and in 1970 when Paulette McWilliams was added to the mix, the group changed their name to Ask Rufus. In 1971, Ask Rufus signed to Epic Records and recorded an album that would never see the light of day and were eventually dropped from Epic. When Chaka Khan joined Ask Rufus, the band changed their name again to simply Rufus. 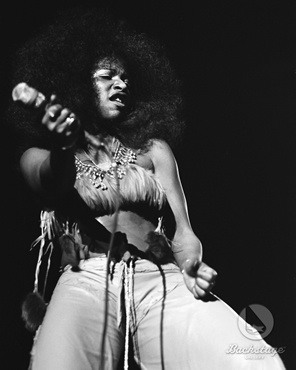 Rufus and Chaka Khan were among the great pioneers of funk in the early 70s. Rufus had fused rock, soul and funk into a unique sound and were no joke when it came to playing tight and innovative music, but Chaka Khan’s addition to the group was exactly what they needed to grab people’s attention. Her unique style, her dynamic powerhouse voice, and her free-spirited stage presence, did exactly that. In 1972, Ask Rufus was signed to ABC/Dunhill Records in LA. Rufus had their self-titled album debut in 1973, and the two singles from that album, “Whoever’s Thrilling You” and “Feel Good,” became widely popular. In 1974 Rufus would change it’s title again to Rufus featuring Chaka Khan and release the game-changing album Rags To Rufus. It would prove to be the gritty funk track “Tell Me Something Good,” which was written by Stevie Wonder, that would blow people’s minds and sell millions. With classic songs like “Smokin Room” and funk grooves like “You Got the Love,” Rags to Rufus is sonic gold. The album Rufusized was also released in 1974 and contained the hit singles “Once You Get Started” and “Pardon Me.” 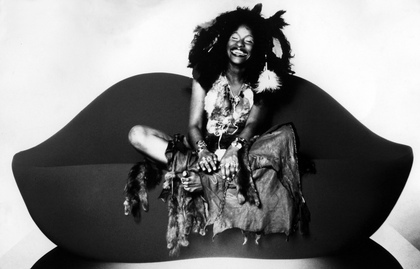 Rufus and Chaka Khan’s success continued throughout the mid to late 70s. In 1975 the self-titled album Rufus featuring Chaka Khan was released featuring the smooth #1 song “Sweet Thing,” and so many other sick songs like “Circles,” “Fool’s Paradise,” “Jive Talkin” which is a Bee Gees cover, and “Dance with Me.” In 1977 they released the album Ask Rufus, that hit platinum, which is not surprising with time-testable songs like “Hollywood,” “At Midnight (My Love will Lift You Up)” and “Everlasting Love.” In 1978 they released the album Street Player which contains “Stay”, the soul classic chock full of thick and tasty vocal arrangements, and Street Player would be Rufus featuring Chaka Khan’s fourth album to hit gold. Later in 1978 Chaka Khan would pair up with the legendary producer Arif Mardin and release her first solo album on Warner Brothers Records called simply Chaka. The classic song and testament to women, “I’m Every Woman,” written by Ashford and Simpson, was on the Chaka album, and the video Chaka Khan made for “I’m Every Woman” was one of the first music videos ever made. 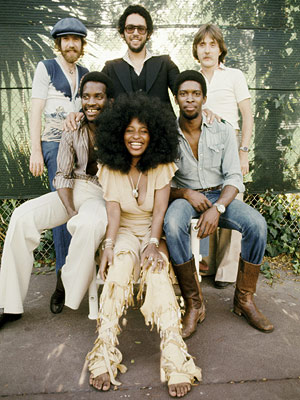 In 1979 with their name now shortened to Rufus & Chaka, they released their second platinum album Masterjam that contained the #1 hit produced by Quincy Jones called “Do You Love What You Feel.” Rufus also released an album that year called Numbers without Chaka Khan. Rufus released another album in 1980 without Chaka Khan entitled Party ‘Til You’re Broke, which like Numbers, pretty much bombed. It had become clear that it was Chaka Khan’s association with Rufus that was the main attraction. In 1980 Chaka paired up with producer Arif Mardin again released her second solo album entitled Naughty, with another crucial Chaka Khan track, the hit written by Ashford & Simpson entitled Clouds. Background singers on the Naughty album include Luther Vandross and Whitney & Cissy Houston. In 1981, Rufus & Chaka released the album Camouflage on MCA Records, which included background vocals from Rene Moore and Angela Winbush who were better known as the 1980s R&B duo René & Angela. Camouflage was also the last album Chaka Khan was contractually entitled to record with Rufus.

Chaka Khan had continued solo success with her third solo album What Cha’ Gonna Do For Me, which contains an incredible song with the same name, as well the equally boogie-inducing track “I Know You, I Live You, “ ‘We Can Work It Out,” and the display of Chaka’s jazz influence with her cover of “A Night In Tunisia (And The Melody Still Lingers On) containing a trumpet contribution from the legendary Dizzy Gillespie. Chaka Khan accepted an offer to do lead vocals on an all-jazz record in 1982 with musicians Chick Corea, Freddie Hubbard, Joe Henderson, Stanley Clarke, and Lenny White that was entitled Echos of an Era. Chaka Khan also released her fourth solo studio album in 1982 called Chaka Khan containing her remake of the Jackson 5 tune “Got to Be There” that hit #5 on the charts. In 1983, the Rufus band released their final album entitled Seal in Red, which without Chaka Khan, also flopped. Rufus and Chaka Khan reunited for a final farewell tour and recorded their last album together, a double album entitled Stompin at the Savoy, with 3 live sides and 4 new tracks, including the classic track “Ain’t Nobody.” 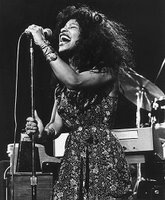 After Rufus split up for good, Chaka continued to solidify her solo success with her 1984 release “I Feel for You” a more commercially driven album due to pressure from Warner Bros. But the title track on that album, as well as “Through the Fire,” although more “pop-ee” than earlier material, are still great Chaka Khan recordings. The version of “I Feel for You” with rapper Melle Mel on it would prove to be the biggest hit in Chaka Khan’s career and was also the very first R&B hit to incorporate rap. In 1985, Chaka Khan continued the trend of collaborating with other artists and did guest vocals on Steve Winwood’s “Higher Love” and wrote vocal arrangements for Robert Palmer’s “Addicted to Love.” Supposedly there is an existing version of “Addicted to Love” with Chaka Khan singing vocals, but Warner Bros. owns the rights to the song and has not released it.

This is the point, in my opinion, that marks the end of the ground-breaking or highly impactful part of Chaka Khan’s musical career. It allowed Chaka Khan to eventually manage and control the direction of the rest of her career and use the respect and popularity she had garnered to do pretty much whatever she wanted with her music. Chaka had many more musical releases and collaborations throughout the rest of the 1980s, 1990s, and 2000s. These recordings include Destiny released in 1986, CK which was a collaboration with Prince, Miles Davis, and George Benson released in 1988, Quincy Jones’ Back on the Block released in 1990 which contained a duet with she and Ray Charles, The Woman I Am released in 1992 which was the first album on which Chaka Khan acted as her own Executive Producer, Come to My House released in 1998 on which she collaborated with Prince, and Funk This! in 2007 which contains duets with Mary J. Blige and Michael McDonald. Chaka Khan has acted, written an autobiography entitled Through the Fire, and has established the Chaka Khan Foundation for women and children at risk, and so much more that it would be impossible for me to cover it all in one article.

The live videos that are featured below span performances from Chaka’s early career with Rufus, up to the time when she released her third studio album What Cha Gonna Do For Me, the span of Chaka Khan’s music that is my most beloved. So sit back and watch the phenom and her famous band in action. Enjoy.

This first video is a 1974 live performance in Central Park of “Tell Me Something Good,” the funk classic that launched Rufus into stardom.

This next video is Rufus performing on the Mike Douglas Show April 21, 1975. Chaka get’s down while singing “Once You Get Started” from the album Rufusized, and gets smooth with the track “Stop on By” which was originally written by Bobby Womack and also appeared on Rufusized.

This is Chaka Khan performing the excellent title track from her solo album What Cha Gonna Do For Me live at the Roxy in 1981.

This is Chaka Khan and her air tight band from the same concert at The Roxy in 1981 performing the horn-driven song “I know You, I Live You” from her solo album What Cha Gonna Do For Me.

This last video is the “cherry on top.” This is a rare gem that I found: Chaka Khan rocking a drum kit. That’s right. Not only does she have one of the most disgusting voices of all time, she’s got skills on the drums too.

I hope you enjoyed the visual and sonic treat of the early, live performances from Rufus and Chaka Khan.
Be sure to check back next time for the 10th installment of Old Soul.
Peace-
Deb