In a musical climate where a chosen few artists get deemed the “next big thing” by major record labels, I often find myself looking to the past for artists that filter their music through their souls rather than through the current mainstream media obsession, the resounding public opinion, or a monolithic record company’s bottom line. It seems like every new mainstream artist just tries to mimic the current Beyonce or T-Pain trends, desperately trying to get a piece the of the overnight success pie instead of trying to take the musical experience to the next level. It’s all about the mighty dollar.

I want you to go back with me to a place where actual people play real instruments to make the live sound. Where songs aren’t just an afterthought to a marketing scheme but are meant to express real emotion. Every note either tears at a heart string or lifts you to the highest high, but it makes you feel something. These musicians have the ability to bring you right into their story, make you feel every word, and all the while never miss a note. Giving voice to their emotion through the very sound that they create. They make you believe that if the emotion they evoke had a sound, it couldn’t be any other sound than the one they’re making. A place where artistic struggle, technical skill, lyrical genius and musical innovation meet and form a sonic supernova. You just have to be lucky enough to catch a glimpse of it. 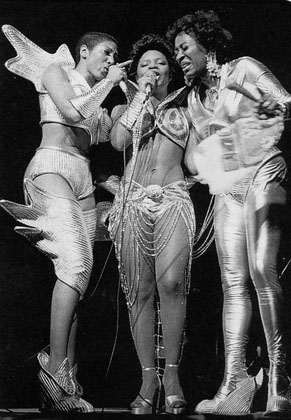 While studio albums attempt to capture an artist’s sound, it is the live performance, in real time, that allows an artist to channel emotion directly from their bodies, hands, arms, feet, mouths and vocal chords to the audience. Thus, I want to take you back to some of the most soulful, funky, greasy, raw performances the internet has to offer.

As the first installment of “Old Soul,” I would like to feature one of the most soulful groups of the 70s: Labelle. Labelle was formed in 1970 out of the 3 remaining members from Patti LaBelle & the Bluebelles: Patti LaBelle, Nona Hendryx and Sarah Dash. After Cindy Birdsong left Patti Labelle & the Bluebelles to join the Supremes, and after being dropped from Atlantic Records, Labelle, Hendryx and Dash wanted to reinvent themselves and move away from the typical girl-group sound and image of the 60s. They changed their name to, simply, Labelle.

While the group’s name is that of Patti Labelle (who you can literally see the soul bubbling out of on stage), it was the sultry-singing Nona Hendryx who actually wrote and composed many of the songs performed by Labelle. That’s not to overshadow Sarah Dash’s spot-on vocal and compositional contributions or the sound that was created when these 3 women united to craft their own unique brand of rock, funk and gospel-infused psychedelic soul. They had a look that rivaled the most extravagant of the glam rockers. They sang on topics ranging from race, sex, and social issues to eroticism, relationships, and love. But whatever topic they were singing about or whatever mood they set, Labelle did it with power, eloquence and real feeling. They gave live performances that brought audiences to their feet and gained a fan-base so loyal, they would have no problems packing venues when, after parting ways in 1976, they reunited and toured after releasing their long-awaited 2008 album, “Back to Now.”

So without further adieu, I would now like to present some clips of this genre-shattering powerhouse trio in their hay-day.

Let Patti Labelle, Nona Hendrix, and Sarah Dash harmonize and send chills through your body with this early 1975, live rendition of “You Turn Me On” from the 1974 album “Nightbirds”:

This is an excellent example of one of Labelle‘s funk-infused, socio-politically themed songs: “What Can I do For You” from the album “Nightbirds.”

This performance really showcases Nona’s songwriting ability and Sarah’s amazing voice. The song is “Can I Speak to You Before You Go to Hollywood” off of the 1973 album “Pressure Cookin”:

And last, but not least, a live performance of “Come Into My Life” which is, lyrically, one of my favorite Labelle songs. It’s from the 1976 album “Chameleon.”
(“Come With Me” is the a cappella song before they launch into “Come Into My Life.”)

I hope you enjoyed taking a step back in time to experience Labelle.

Check back next week for more “Old Soul.”