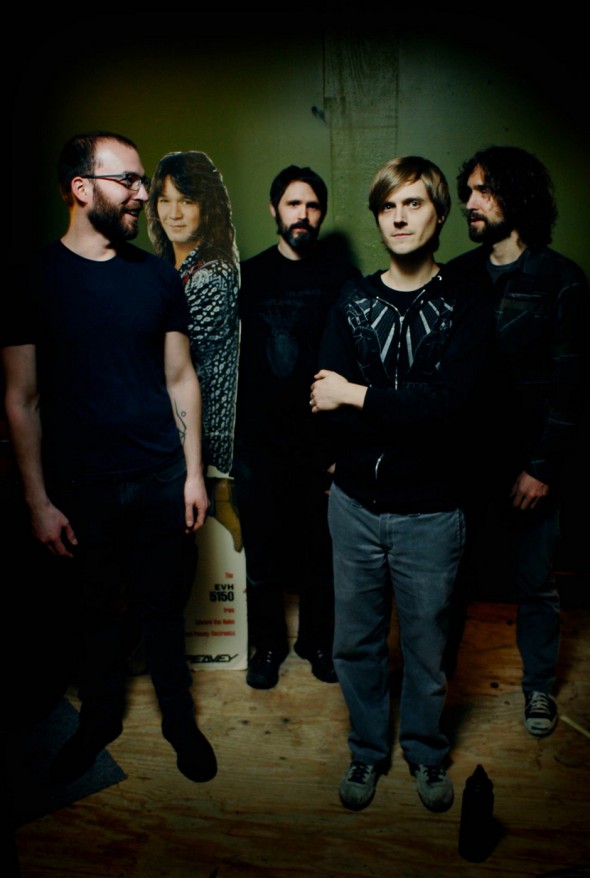 Renowned genre-bending instrumental outfit, Pelican are launching US tour actions today featuring stops alongside an eclectic mix of bands including Tombs and Nothing. Tour dates are featured below in full. But first- We recently had the opportunity to catch up with Pelican drummer, Larry Herweg for some insight into the making of the band’s latest LP, Forever Becoming, that was released last year via Southern Lord Recordings.

Critics and fans hailed Forever Becoming as the effort comes more than four years following the band’s previous full-length, 2009’s What We All Come To Need. The new full-length was crafted during a transitional period seeing a member shift after losing longtime guitarist Laurent Schroeder-Lebec that sparked something of a new beginning for a band that has been active since 2001. Sputnikmusic.com gave the album a “4.5 Suberb” rating commenting, “Sometimes a lengthy break is all a band needs. While it usually spells out doom a majority of the time, Pelican’s sound here is invigorating, and that can only be due to the time they spent away from music to recharge their batteries and create a fresh, creative and delightful listen.”

Forever Becoming was a writing effort stretched across the US with members located in the LA and Chicago areas. Herweg explains the origins of the new album saying, “Trevor [de Brauw] came to LA for quick weekend during the Grammys and we got together. He had all of the riffs mapped out in his head and we just went through part-by-part. That got everything moving again. It happened so effortlessly and easily. He went back to Chicago and was feeling really good about it. Over the next few months he was sending all these demos that were guitar-based at the time. And in the meantime, my brother [Bassist: Bryan Herweg] was kind of doing the exact same thing on guitar as well, writing all these demos. I started booking trips to Chicago every couple of months. We would do a long weekend or week and just lock ourselves in the studio. We were pretty much just writing it as a three-piece up until the winter when we brought Dallas [Thomas] on as a full-time member. He had been touring with us for a couple years, so when we did that he just immediately grabbed all of the demos we had, wrote his parts, and kept the whole machine rolling. When we got to the studio we had eight songs ready to go.”

When asked about the recording approach to the drums tracks with Chris Common who also recorded the Ataraxia/Taraxis EP (2012) Herweg explains, “He was trying to capture us closer to the live setting. We tried different things, we were all in Chicago at Electrical Audio with access to two different studio rooms. We did drums in two different rooms. You’ll hear different drums sounds throughout the record. Obviously the opening song “Terminal”, the drums sound way different than they do on the rest of the record. For that track, we took the drums into the big Studio B room which is a gigantic drum room. He (Chris Common) just put two mics across the room, nothing close, so the drums just sounded massive. The rest of the tracks were tacked with close mics in the Studio A room, which is much different sound that works well for other songs.”

Pelican will be playing the Triple Rock Social Club tonight in Minneapolis, MN before heading to Champaign, IL, and Madison, WI. Full list of tour actions below. 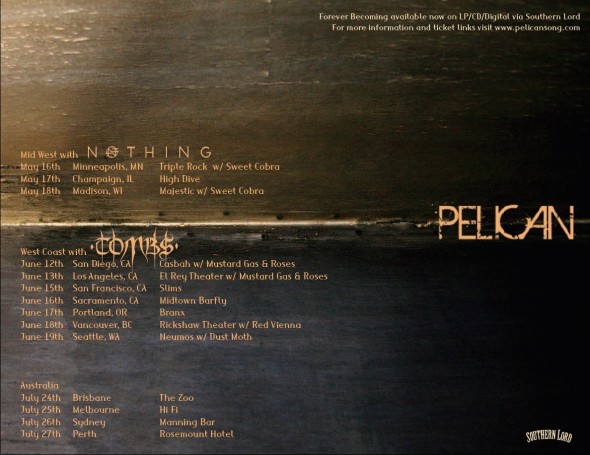 * with Nothing
^ with Tombs