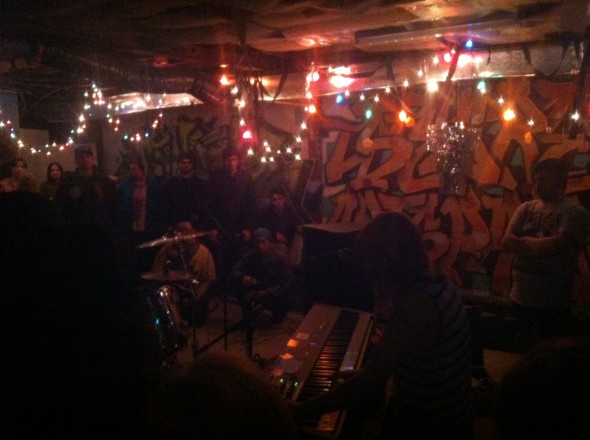 One of Eastern Pennsylvania’s most respected underground DIY venues, The Secret Art Space of Bethlehem, PA, is celebrating its final weekend in existence with a marathon cast of performers tonight through Saturday evening. As this staple venue says farewell, we had the opportunity to catch up with one of the Secret Art Space‘s main organizers and operators, Chris Reject. Himself a patriarch of Eastern PA’s DIY community, Reject gives his unique perspective on the SAS as not only a man behind the scenes, but as an active musician, screen printer, and record label owner.

More information on the final Secret Art Space shows can be found HERE.

Joshua BTS: Greetings and thank you for taking a few minutes with Blow The Scene readers from around the world. We’ll get this interview rolling by having you introduce yourself and role with Bethlehem, PA’s leading underground venue- Secret Art Space.

Hello fellow earthlings. I’m Chris Reject and I help run the secret art space. I mostly just book and help run some of the shows and make sure the rent is paid on time. The landlord loves me. I’m very charming, you know.

Joshua BTS: When did you first start working with Secret Art Space and how did you become involved?

Chris Reject: I’ve got a shit memory, but I’d say I started helping out within the first 6 months or so of the space opening – which would be spring of 2009, I guess. Renee and Hannae knew the folks who were renting it as a workshop at the time, which led to shows, which led to me sticking my nose in their business. I’ve known Hannae for like a fucking decade and I’ve been booking/attending shows in the LV since the late 90’s, so it wasn’t exactly a huge leap for me to get involved.

Joshua BTS: How big is the staff at Secret Art Space and how do you break up responsibilities?

Chris Reject: There’s only ever been 2 or 3 people running it at a time. There’s never really been much structure as far as duties go – we just gravitate toward the tasks we are connected with. I was most active with shows, others had more of a hand in things like the women’s discussion circle or indie craft markets. 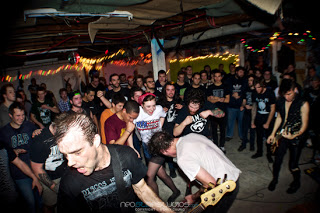 Joshua BTS: The venue is hosting a set of farewell shows this weekend as Secret Art Space will be closing it’s doors permanently after this week. First tell us about these closing shows and what they will entail. Why did Secret Art Space choose to shut down this month?

Chris Reject: The space is closing for a million different reasons, but the final catalyst was that I decided to step back because I need time to focus on my screen printing company and I needed a chance to fall back in love with punk rock. We discussed the options of moving forward without me and the general consensus was that things had run their course and it was better to just close on our terms, go out on a high note, rather than beating a dead horse.

Joshua BTS: Will you still be booking shows? If so- Will they be in Bethlehem? Is anyone working to fill the void that will be left by the Secret Art Space? You have built quite a reputation as one of the best area underground venues and show spaces. Will be sad to see it go.

Chris Reject: As I mentioned previously, I need a break. Running a space like SAS is incredibly demanding and requires immeasurable personal sacrifice and dedication. Hannae, Renee, Maggy, Felicia, and Liz can all attest to that. I’ve been involved in different DIY venues around here consistently for the last … fuck – 10 years? Ten years is a long time to give up weekends so you can work shows and see a bunch of crappy bands you probably don’t even like! HA! I’ll never stop being involved in DIY, but I’m looking forward to reducing my role in the LV scene for a little bit. I know that something new will pop up – something just as cool as the SAS, I’m sure. My friends and I started booking shows around here in 1999/2000 simply because nobody else was doing it. Someone else is going to pick up the same way we did. Punk is nothing if not resourceful, something really rad is going to pop up.

Joshua BTS: What have been some of the challenges to working with Secret Art Space over the years?

Chris Reject: Time and money. That’s life, right? Paying bills is tough and there’s never enough time to get all the shit done that you’d like to get done. We’ve had almost zero COP PROBLEMs, which I’d attribute to the fact that SAS is a 100% sober space and also that all the kids who support it really protect it. If kids see other kids drinking, they tell them to stop. If kids see other kids hanging outside and drawing attention to the space, they tell them to go for a walk. There are a ton of really incredible, grateful, supportive kids around here and they care about the space as much as those of us who technically run it. These are the kids who will start the next cool space. On the other hand, though, there’s also plenty of shit-talking boneheads. If I had a nickel for every time I had to argue with someone about the space’s sober policy, I’d be a fucking millionaire. I don’t get it. The way I see it, booze brings cops and cops shut down venues… it’s not fucking quantum physics, right? Dealing with the same small-minded, short-sighted arguments gets tiring. 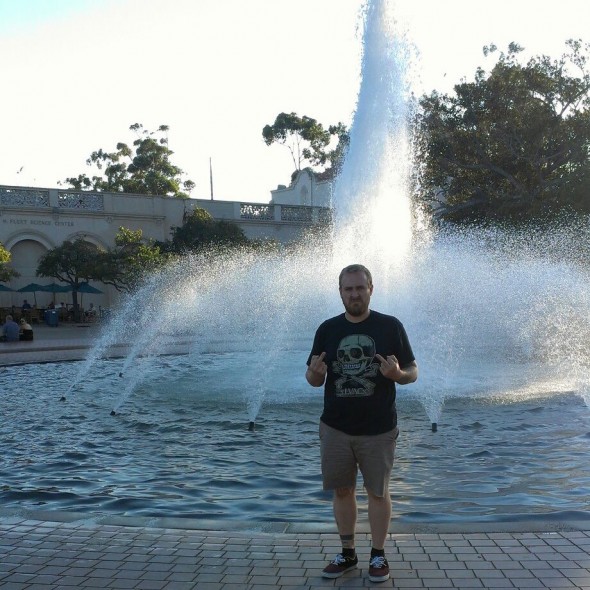 Joshua BTS: What have been some of the more rewarding aspects of working with the venue?

Chris Reject: Starting and strengthening friendships, the inspiring personal relationships that have been created or flourished as a result of the space. Seeing some young’n get their mind totally blown when they come to the space for the first time – the kids that are used to 3ft high stages, big bully asshole security, $5 bottles of water, etc. The process of learning how to run the space has been incredibly stimulating and exciting as well, as nerdy as that probably sounds.

Joshua BTS: What are some of the most memorable moments you’ve had at Secret Art Space?

Chris Reject: Fuck, now you’re putting me on the spot. The last time Oak & Bone played at SAS will be a memory I take to my grave. The first day of Decade Of Dumb Decisions Fest (my record label’s 10yr anniversary fest) when we jammed like 170 people and 9 bands into the space at the end of July. Pretty much any time Ninjessa played. Too many to list, honestly.

Joshua BTS: Do you dabble in any arts yourself? Musician, artist, or otherwise?

Chris Reject: I run Square of Opposition Records, I play drums in a band called Get to the Chopper, and I run a screenprinting company called Lehigh Valley Apparel Creations (LVAC). Felicia plays in a band called Moonstruck who rule. She and Liz both play in a Bikini Kill cover band with Maggy. Renee is off smoking patchouli, braiding hemp, and playing tabla somewhere in the Northwest. Everybody ever involved in the space is/was also super active elsewhere (which always created it’s share of scheduling issues!).

Joshua BTS: What would be your advice to anyone looking to start a new music show space?

Chris Reject: Do what you think is best for the sustainability of the space and ignore the apes who second-guess your every move. Don’t let the fuckers drag you down. 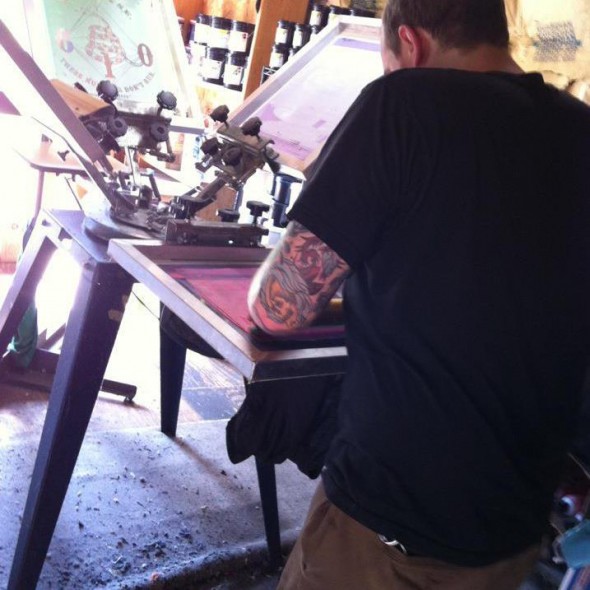 Joshua BTS: We really appreciate you taking a few minutes with Blow The Scene readers from around the world! Any final thoughts?

Chris Reject: You can be the change that you want to see in your community. Everything you do has an impact, even if it’s a small one, so fucking try something. Start a band, book a show, release a record, whatever you want. DIY or fucking die. 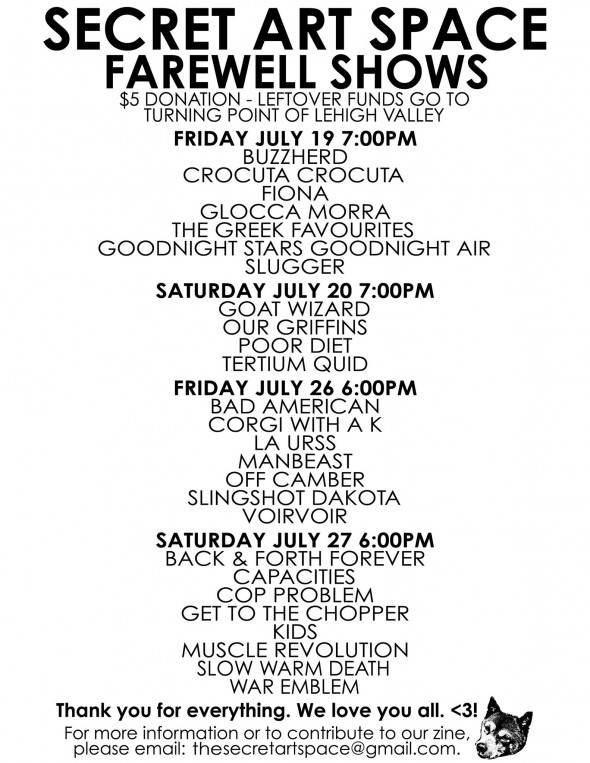