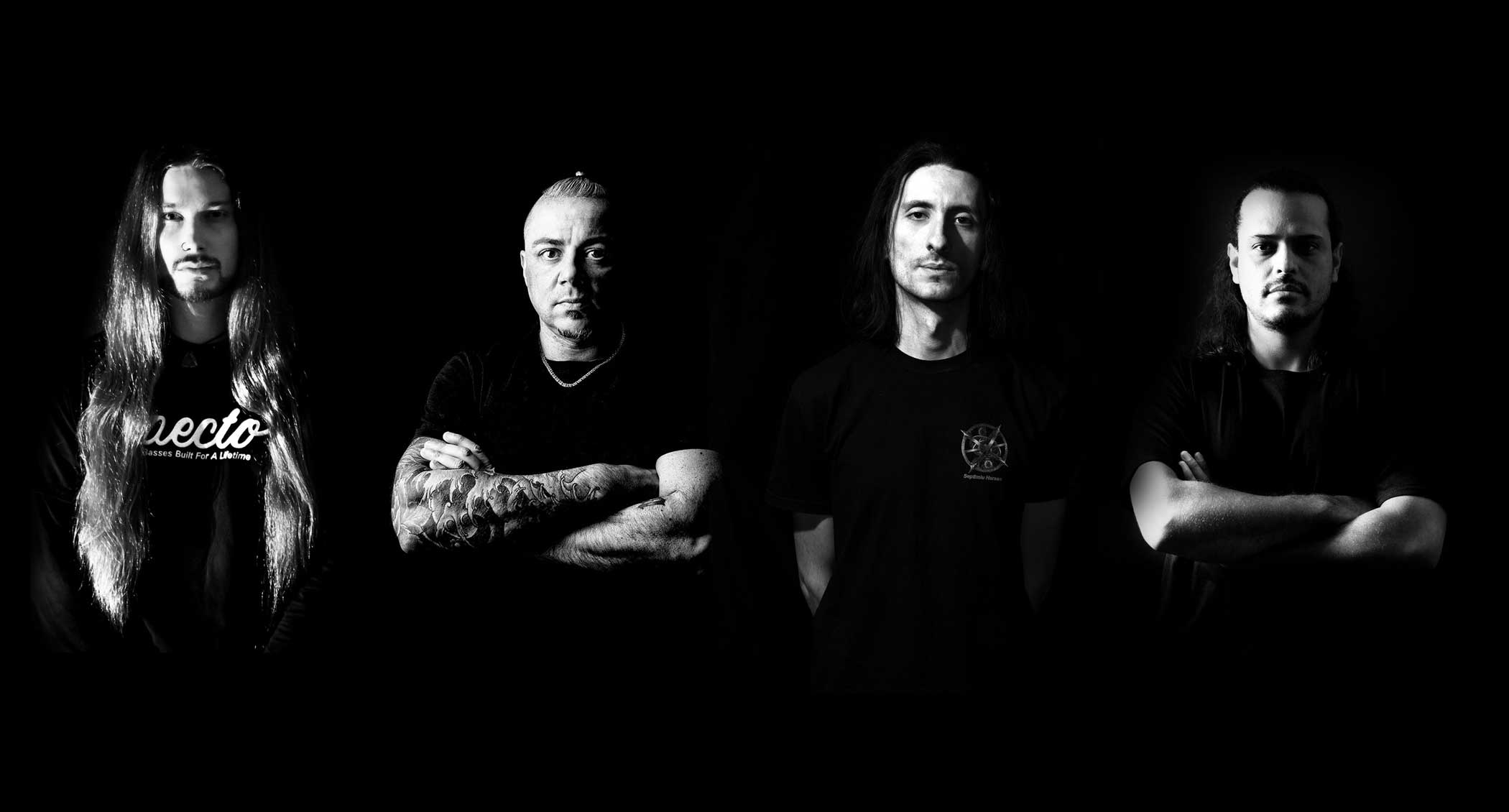 Today we continue The Creation Formula series, focusing on the musical craftwork of hand-selected artists from around the world. Enjoy an in-depth interview with guitarist and vocalist Patrick Mameli, founding member of seminal death metal band Pestilence. We hone in on the band’s latest full-length Hadeon, which has proven to be a standout release of 2018.

Founded in 1986, the Netherlands’ Pestilence is undoubtedly one of the most important bands to emerge from the tumultuous history of death metal, actively on the cusp during the brutal origination of the form.

In the early 90s, Pestilence would prove instrumental in igniting a much-needed progression within the style. Truly a classic act, who despite numerous member changes, have maintained a progressive and unique sound. These accomplishments due in no small part to the continued efforts of founding guitarist/vocalist Patrick Mameli, who is the focus of today’s feature.

Following the fusion-laced and frequently criticized mind-fuck of their 4th full-length Spheres in 1993, Pestilence took a lengthy break from the catacombs of death metal and after almost 15 years released a crucial return to form with 2009’s Resurrection Macabre. A number of moderately successful records (2011’s Doctrine and 2013’s Obsideo) followed with a level of experimentation expected from Patrick and his brutally efficient henchmen.

Now 30-plus years down the road, Pestilence’s latest album Hadeon is unquestionably one of the band’s most shining installments, exuding a technically grounded approach while maintaining a heavy focus on song-craft. Within the constantly evolving frontier of extreme music, it is clear to many of us, that a return to memorability over technicality is still severely needed today. Fortunately, Pestilence has returned with an excellent reminder of how this important principle works. 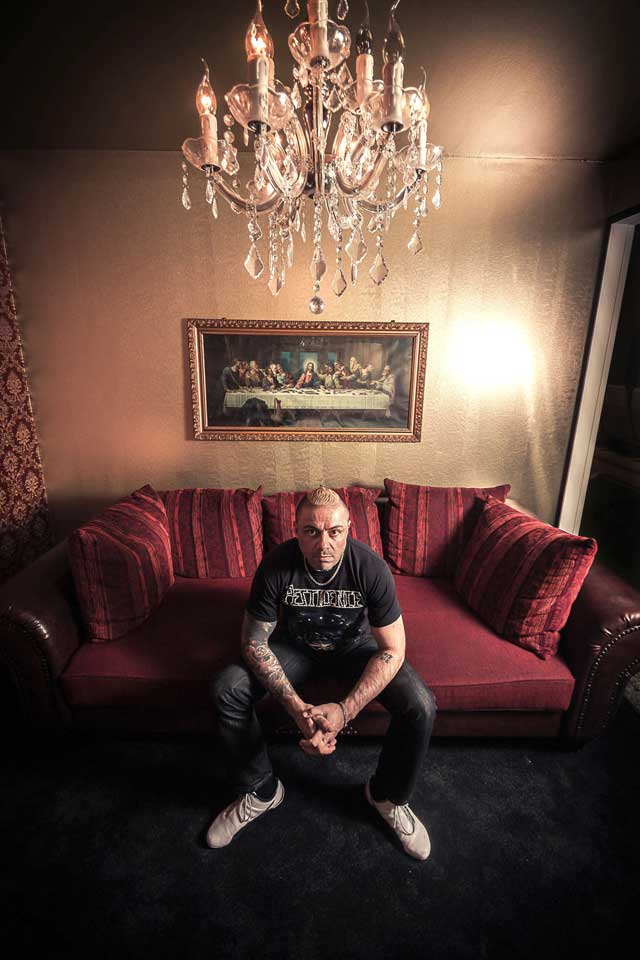 BTS: The material on Hadeon is clearly a return to a more classic form. Was this intentional or did the writing process flow more naturally without any preconception of playing in a certain “style”?

Patrick: It was a natural progression from all the experimentation that I did in the past. Going back to the natural 6 string guitar was somewhat of a blessing. The songs sound way more back to the holy times of Testimony. I have always strived to write memorable music. In that regard nothing much has changed. Playing technical does not mean much when live it’s hard to follow to start of.

BTS: Was there anything different in how this album was written? Were things composed together in a band setting or were tracks demoed prior to rehearsal/recording? Additionally- What is the creative process to the riffing and arrangement that you personally use (software, recording interface, rehearsing with click tracks, etc…)?

Patrick: Well, it’s just more of the same process. This process means that I use Cubase to record the initial riffing ideas and song structures. Later in this process, I then will program the different drum patterns. So by the times the songs have reached demo stage, they will be sent the rest of the guys. So all the songs come from my head. I give the guys the freedom then to fill in the parts. When they come up with a better way of putting my music in the context of musical vocabulary, we go with that. So it’s pretty fair to say that the guys are very much involved in the recording process.

BTS: The lyrical content in Hadeon seems to be a logical progression from prior records. Science/Science-fiction, horror, and metaphysics seem to reoccur as topics for your writing. What are your influences in this area? Are there any recent books/readings that have sparked your creativity? Also, do your vocal patterns usually emerge after the music/riffs have been composed or are songs sometimes driven by a vocal or lyrical idea?

Patrick: I do not read at all. I just let my mind roam free and come up with crazy ideas. Later on, I will try to google it and see if there are references to be found. I do not believe in a God or Satan. But I do believe in powers that come from a different dimension. Whether it’s electromagnetism or other energy forms. The way the musical thought process goes remains a mystery to me as well. I usually hear something in my head and then I try to translate it into notes. Or, like you said, this can occur after a song title. The way the rhythm goes when spoken. That could be translated into music as well. 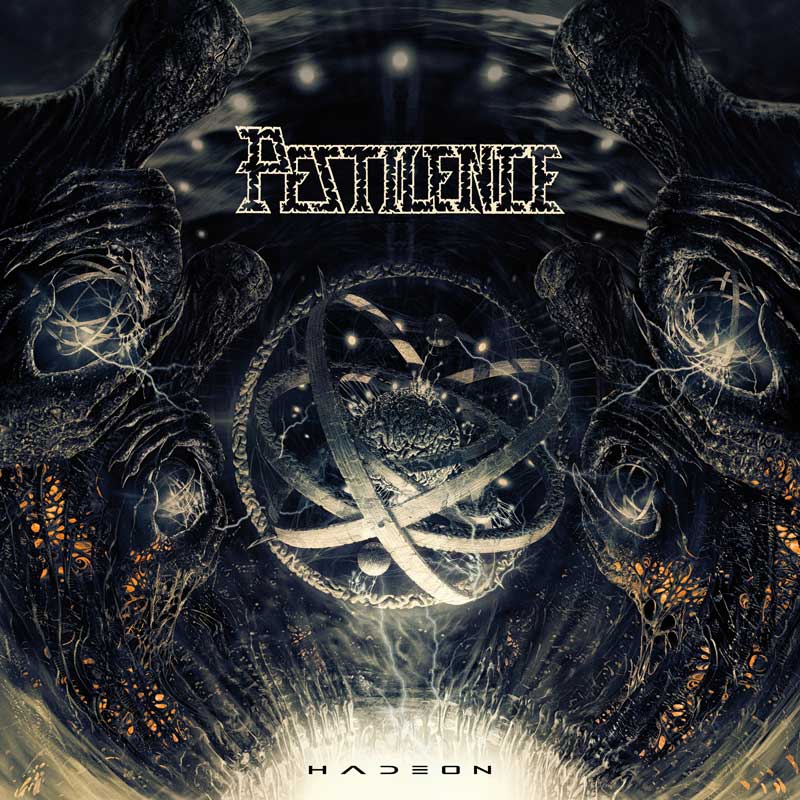 BTS: Hadeon sounds like a very direct link between 1991’s Testimony of the Ancients and 1993’s Spheres. The new (and awesomely done) artwork also seems to hint at this. What are your thoughts on this?

Patrick:Well, Hadeon sounds like Hadeon. The sound on that album is way better than any of the previous albums. And the songstructures haven’t changed that much either. All is just way better executed and performed. I am truely blessed with this line up. All musicians are on top of their game, which makes things way easier. Well, Hadeon is a blend of all my previous work. It just sounds like Pestilence really. Another big difference is the way the bass guitar sounds in the mix. Tilen is Pestilence’s best bass player to date.

BTS: The reissue of Spheres has demo tracks (‘Reflections of the Mind’, ‘Searching the Soul’, ‘Times Demise’) that feels surprisingly similar to older material. Were the final layering and production choices on Spheres meant to be such a massive departure from these demo tracks?

Patrick: You must understand that this was done intentionally. Roadrunner and Pestilence were not so good friends anymore at that time. We wanted to get out of the record deal because we felt that we were neglected and ill-treated.

And then there was the money issue. We never got paid and they owed us major royalties. After they asked to do a demo first, we gave em the demo which sounds great. Then when we recorded the album, we intentionally changed all. So we got dropped. That was what we expected to happen.

BTS: The lead playing on Hadeon is by far the most impressive within the Pestilence catalogue. What was it like working out the lead parts with Santiago Dobles? Santiago has a very distinct style that heavily contrasts with your more “Holdsworthian” influences. Knowing Santiago’s work with Aghora I expected the playing to be incredible. What brought about the decision to work with Santiago and how did you guys first meet/interact?

Patrick: I only know Santiago through our phone conversations and emails. But that gave me a clear picture of what kind of person he is. He is a very cool dude and his playing is incredible. I just love the contrast between our solo playing. I was not involved in his solo playing process. I just trusted him with my atonal riffing. He did an outstanding job.

BTS: With the 30th anniversary of 1988’s Malleus Maleficarum I understand you guys are doing an old-school set and tour in Europe. Can you give us some setlist details? How have the shows been received?

Patrick: The first stint is done. Packed houses everywhere and the feedback is amazing. The band’s performance was phenomenal. 4 days of practicing prior to the tour. How awesome is that. We played 4 songs off each album, up until Spheres. Antro, Parricide, Subordinate, Commandments, Dehydrated, Chronic, Echoes, Out of, Secrecies, Twisted, Land, Prophetic, Presence and Mind Reflections.

BTS: What are your thoughts on the use of blast beats in modern death metal (and really metal in general)? Hadeon clearly limits the blast. Was this intentional? Do you feel that memorable song-writing is impacted by blast-dominant music?

Patrick: If used in a proper way and well executed, it’s pretty cool. But it should not be the standard. There are so many ways to express yourself musically right? On Obsideo we proved to be the masters of blastbeat as well. But I don’t like it to be too dominant in my music nor should it be the only form to rely on. Pestilence is Pestilence.

BTS: Can you talk a bit about your gear, amplifier, and tuning preferences? Additionally- Are there preparation habits for shows/touring that makes your performances more successful?

Patrick: Standard E tuning for guitars and bass. Well, my gear changes a lot but I try to stay away from the fashion grills out there. Everyone wants fractal but will sound alike. So I stay away from them. For the tour, we used Hook amps and OKKO distortion pedals. For the recording sessions, I used a mix of Mesa and Engl. I probably will go with Ignite Amps from Rome. But I will try about anything to get something decent.

Patrick: Maybe not so much metal but yeah, fat milk coats my throat and I get better results. I do get some stupid comments about that. That milk is not very metal. Who cares about that. I only care about results.

BTS: As a final question- Do you have any good morbid tales from the DEATH, PESTILENCE, CARCASS US tour in 1990? Any odd or fun memories for this first trek to the states? Show highlights (or LOWlights)?

Patrick: It was a great opportunity for us to profile ourselves on the USA market. We toured under poor circumstances and the food situation was bad. I even had to go to the hospital because of malnutrition. Shows were great and we outplayed Death and Carcass a bunch of times. We loved every second of it though.

BTS: Any last words for your fans around the globe? Thank you so much for the time!

Patrick: Give Hadeon a spin and support the band. We love you all. Thanks for this interview.