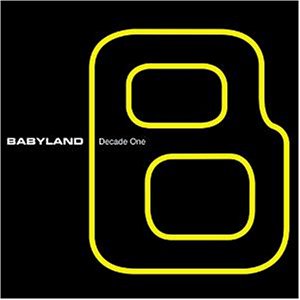 The Tapes Your Mother Laid Out For You
Fourth Installment: Babyland – Decade One (2002)
by Andrew W. Miller

Most people upon hearing phrases like “avant garde percussion” and “industrial equipment” in association with industrial music are going to start thinking, okay, 1980s, West Berlin, Einstürzende Neubauten. And in fact the album discussed here was, in fact, released in Germany, and is very much the musical descendant of Einstürzende Neubauten. However, Babyland was based out of Los Angeles and was active mostly in the 1990s.

Their music is more upbeat than Einstürzende Neubauten, which can perhaps be attributed to the fact that they describe it as “electronic junk punk” rather than industrial, though their can be no denying the industrial core of the music.

Decade One is a compilation which highlights many of the best songs from the first four full length albums. It touches on different shades, moods, and styles that Babyland so charismatically displayed throughout their early career.

“Worst Case Scenario,” though driven by cacophonous, primitive, banging and buzzing, has a very Gen X, nihilistic feel to it. The song originally appears on the album A Total Let-Down. Angry but perhaps directionless, as is evidenced by the video which jumps between camcorder shots of graveyard vandalism, drug use, violence, and teenagers swimming. Still somehow it’s fun.

This same feeling of turning listlessness and the need for kinesthetic release is also conveyed by songs like “Youth Choker.” In this instance, the noise-making is as much retro-tech as it is industrial, as the makeup of the song appears to rely on noises that sound like old printers and which are, at times, fuzzed down to low-fi WAV-caliber effects.

A more sedate and defeated-sounding Babyland can be heard on “The Door Northern,” originally from the album Who’s Sorry Now?. It’s one of the strongest and most distinct songs of Babyland’s career. It’s strength lies in the simplicity of the programmed loops and muted, whispered vocals.

The two-piece group also has a keen sense of irony, which is evidenced in particular by the song “Double Coupon.” “You failed to save / you failed to cut out / the double coupon / … / Your family will pay the price.” Hilarious, noisy, and like a majority of Babyland’s material, very, very catchy.

The compilation also comes with a booklet which extensively chronicles the background of each song, placing it within the context of group’s career. A great read for the listener who arrives early enough to rock out to “Back of Love” in a community college parking lot.