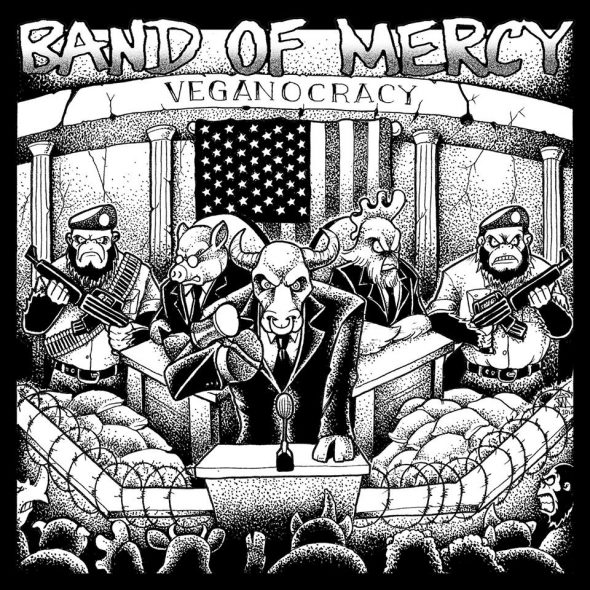 Enjoy the full debut stream of Veganocracy, the forthcoming 7″ by Texas vegan hardcore rabble-rousers, Band Of Mercy ahead of the street date (July 29, 2016) as the band drops this six-track ripper on Dead Truth Recordings (North America) and Ugly & Proud Records (Europe).

Featuring members of TX hardcore mainstays Die Young and Florida’s Axis, Band Of Mercy is known for a take-no-prisoners attitude that is aptly described by Toxicbreed’s Funhouse as “..so adamantly convicted of their lifestyle that they make Earth Crisis lyrics look like U2. Band Of Mercy is not just about spreading the ‘good news’ of Veganism, they’re all about.. convert or be crushed..”

Veganocracy is the band’s third overall release- this time taking lyrical aim at ‘excuse makers’, ‘fake hippies and environmentalists, omnivores, circus goers, self proclaimed nutritionists, and probably you’. Track, “The World Will See” holds tribute to the courageous whistleblowers that infiltrate factory farms, fur farms and other facilities of animal abuse to expose every day atrocities to the public. These aren’t the nice vegans from your yoga class.

Musically, the 7″ is just as gripping as the message with noted influences by the likes of Tragedy, Carnivore, and Motörhead seeing everything from d-beat-saturated hardcore riffs converging with thrash and metal in a seemingly effortless execution. The production of Veganocracy is tight and well-executed without being overly polished or pretentious, setting up what should be one of the most well-received EPs from the hardcore world in 2016. Without further ado, enjoy the full stream below: