Camp Bisco Ten began for me at 6:30am Thursday July 7th, 2011. I awoke to a gorgeous sunrise over Mariaville Lake, which found its normally peaceful road activity saturated with bumper to bumper hardcore electronic and jam music fans. I stepped out of the cramped backseat of a Volvo to stretch and was met with the familiar greetings of what most of us within this particular music scene would call “family.” Somehow hearing “Good Morning” from 20 different strangers within a half hour of waking up will always make for a great day, which I would find out, foreshadowed an even more amazing weekend.

As cars piled through the entrances into Indian Lookout Country Club (ILCC), music seemed to increase in volume along with the rising sun. The main field, where cars filed in like cattle to be searched, resembled the arriving-flights terminal at a major airport. Perennial Camp Bisco and general music festival friends darted toward each other like blood relatives for their long awaited reunions in front of hundreds of onlookers without a care in the world. As I sat and waited for my own car-pool of friends, watching people hug and disperse like colliding electrons, I couldn’t help but think, “this is Camp Bisco.”

Arriving at our camp site, I noticed most people had the same 2 person tent from Wal-Mart I had bought the day before. A 25 dollar purchase I would have much rather seen go to The Disco Biscuits if they sold tents at the venue, hint hint. Once the base sleeping arrangements were completed the concertgoers had a character explosion with multicolored garments and decorations at every turn. Each camp site had its own flavor and personality. Some stayed conservative with your garden variety canopies and tent circles, while others hung colorful tapestries with night-lighting to find their temporary domiciles better after dark. Regardless of how each set-up looked on the surface, once again a “family” vibe took over as the main focus. Building a camp site was much more about meeting your neighbors than getting up and running before the first live act at 2:30pm. A bond that would easily last you through Camp Bisco, and possibly for years to come. The sun reached just past its apex above the ILCC’s rolling green fields, and I made my way down the long dirt path to the Main Stages to see the opening act of Camp Bisco’s Tenth Anniversary. From then on, my weekend became a blur of amazing music and fantastic happenings. Seeing Afrobeta, The Pimps of Joytime, Run DMT, Sonic Spank and Beats Antique before dinner had created within me, a craving for more, rather than a feeling of being overwhelmed, as I was expecting. I took a break during Borgore to try finding the best place on the vendor strip to eat for the weekend ahead, and I found a pure gem in the “Asian Sensation” tent. Delicious Chinese food at all times of day is a luxury most festival goers are not awarded, and for this reason, “Asian Sensation” wins the best Camp Bisco food in my mind. The “Chicken on a Stick” is highly recommended.

Once I had filled my gullet with fine Asian cuisine, I prepared my camera, as well as, my heart for The New Deal’s bitter-sweet final set at Camp Bisco. As the time approached for this iconic three piece, electronic-infused-jam-band to take the stage, cars were still waiting to be searched and sent to their respective camp sites at the entrances. Of course, no one within a mile of what was about to happen was going to miss The New Deal. Entire cars simply let out, turned off, and made the once moving line a parking lot to catch one of the main attractions of Camp Bisco 2011. A decision which turned out to be well worth making. The New Deal played a fiery set to cap their attendance record at Camp Bisco, and left fans overjoyed to have witnessed one of their best live shows ever.

Directly following The New Deal, Cut/Copy played through sunset and announced the first nightfall of Bisco weekend. The bass erupted into an undulating sea of neon glowing dance music fans. Immediately Cut/Copy’s “Hearts on Fire” became an unforgettable memory of my first Camp Bisco, but this was just the beginning. The Disco Biscuits, Camp Bisco’s loveable hosts, played their first set at 9:15pm Thursday night. Questions of whether The Disco Biscuits had brought their laser rig, and what the three giant cubes above the stage would be used for, that had plagued the main stage field during the day were answered in one fell swoop. Glowing beams of light and images from past years passed above John Barber, Marc Brownstein, Aron Magner and Allen Aucoin, while their loyal fans sang their lyrics back to them. Once again, I felt “Welcome to Camp Bisco” wash over me.

Released exclusively at Camp Bisco as the gates opened on Thursday, the Disco Biscuits’ latest studio album – Otherwise Law Abiding Citizens – features the studio incarnations of many of the group’s live show fan favorites in addition to some of the band’s latest material.

Advance copies of Otherwise Law Abiding Citizens were sold to eager fans as they waited in line to enter the sold out Camp Bisco X. Copies were available throughout the weekend at the festival merch tent and at meet and greets with the band members. The band’s annual, 3-day, namesake festival saw a maximum capacity crowd of 25,000 on hand to witness the surprise release, which served to commemorate 10 years of Camp Bisco. Fresh off of a high-energy tour in the fall of 2010, The Disco Biscuits recorded Otherwise Law Abiding Citizens in short order at Studio 4 in Conshohocken, PA with Grammy Award-winning producer Phil Nicolo, whose credits include projects with Billy Joel, Yoko Ono, Bob Dylan, Aerosmith and Dave Grohl. In contrast to the 3-year Planet Anthem album process, the band committed to finishing their latest release in just two weeks last November. The album was produced by The Disco Biscuits with additional production by Twisted Records’ Benji Vaughan.

By entering the studio on the heels of a powerhouse tour, the Otherwise Law Abiding Citizens album sessions were a return to The Disco Biscuits’ live roots. The result is an album that feels as eclectic and energetic as one of the band’s signature live shows. The tracklist – which is a collection of the group’s live fan favorites (in addition to some of the band’s latest material) – is a further testament to this concept.

The album art, including a poster insert, features “mug shots” of the band, their management, crew, friends and fans. The photos were taken by Jesse Borrell and his NoCoast.tv colleagues, who also had access to capture the experience of the album recording sessions in a documentary. Backdrops were set up at Denver’s Ogden Theatre as well as at the famed Red Rocks Amphitheatre to capture the photos during the 3-day Colorado run over Memorial Day weekend 2011.

Instead of boring you with the rest of my personal memories from Camp Bisco 2011, I’ll let you get to the pictures you have been salivating for. If you have never made the trek to Camp Bisco, you are missing a fantastic vacation. Although VIP tickets may seem steep in price, I can guarantee the experiences they result in are worth much more. The Disco Biscuits, and many other performing artists, spend a lot of time simply hanging out with their VIP supporters into the wee hours of the morning. Not to mention the front stage access VIP’s are granted for the entirety of Camp Bisco. Believe me, seeing Bassnectar less than 15 yards away is an experience every electronic music fan should have at least once. Most of all, you feel like family. Whether you are a seasoned Camp Bisco veteran, or a first timer like myself, the people are more than happy to smile, bullshit and have a beer with you. Camp Bisco is an electronic music and jam band fan’s equivalent of a Sandals Resort vacation.

Thank you to The Disco Biscuits, and the Camp Bisco staff, for graciously having me shoot Camp Bisco 2011. I will gladly give up vacation time to do so again for many years to come.

Words and photos by Timothy Bonner. 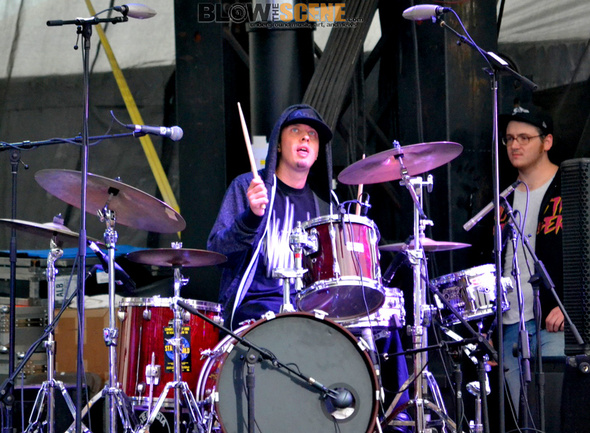