I have been considering the artist featured in this installment of Old Soul for a couple months now, and upon hearing the news that she had passed last Saturday (August 14, 2010), I decided not to wait any longer. She was a jazz singer, songwriter, composer, poet, actress, social activist and much more. She had a singular voice and was able to convey her thoughts and emotions through her voice and words so honestly that she often made people uncomfortable, and was not afraid to do so. She used music as a vessel of truth and activism. She was none other than the unforgettable Abbey Lincoln.

Abbey Lincoln was born Anna Marie Wooldridge in Chicago on August 6, 1930 and was one of twelve children. She grew up in rural Michigan in a house her father built, began playing the family piano at a very young age, sang in school on holy days, and sang a little in church choirs throughout her childhood. However, Abbey Lincoln said she “learned how to sing from listening to Billy Holiday and Sarah Vaughan and Dinah Washington” (NPR). Ella Fitzgerald also had a big influence on Abbey Lincoln. 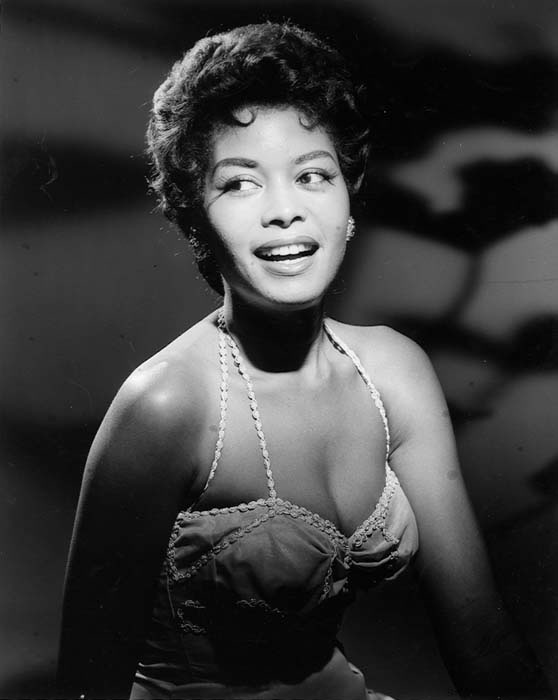 In 1950, Abbey Lincoln moved to California and began working in night clubs. At age 22, she went to Honolulu for a year and performed under the name Gaby Lee. In 1954 she moved back to California and met lyricist Bob Russell who became her manager and gave her the name Abbey Lincoln, along with a chic and glamorous image, and she credited him with bringing her international recognition. Under Bob Russell‘s management she landed a role in the movie The Girl Can’t Help It in which she famously wore a dress that Marylin Monroe had worn. Abbey felt this career path was insincere, that she was being robbed of her individuality, and said she “felt nothing” on stage during that time (NPR). That was the end of Abbey Lincoln having that type of management, she fired Bob Russell, and she didn’t need a manager to find places to sing. When talking about this decision in an NPR interview she said “I’m unmanageable. No one can tell me what to do with my life, or my career either, which is my life.”

In 1956 she made her first album entitled Abbey Lincoln’s Affair – A Story of a Girl in Love containing arrangements by Marty Paich, Benny Carter, and Jack Montrose. In 1957 Abbey moved to New York City and worked at the Village Vanguard, a supper club for aspiring artists. It was there that she met jazz drummer Max Roach, who she would later marry in 1962, and through her association with Max Roach, she was introduced to the jazz elite. She was noted for having the ability to take classic jazz songs and make them completely her own. In 1957 she recorded the album That’s Him which contained the track “Strong Man” written by Oscar Brown Jr., and had contributions from great musicians such as drummer Max Roach, bassist Paul Chambers, and saxophonist Sonny Rollins. 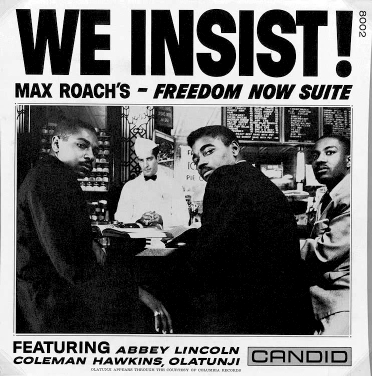 As the civil rights movement was gaining momentum in the late 1950s, Abbey Lincoln began to work her social views into her music. The jazz musicians she collaborated with were also experimenting with odd meters at the time, and Abbey took to it naturally. In that regard, her 1959 album Abbey is Blue was considered new and groundbreaking. In the early 1960s, many artists, Abbey Lincoln and Max Roach included, were lending there music and voices to the movement, and in 1960, Lincoln, Roach, lyricist Oscar Brown Jr., and other great jazz musicians recorded Max Roach’s landmark civil rights jazz masterpiece We Insist! – Max Roach’s Freedom Now Suite, which was one of the most important works of that time, and is also what first got me interested in Abbey Lincoln. The cover of the album features a picture which references the sit-in movement. 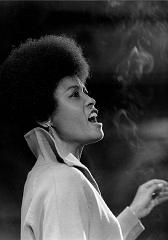 Abbey Lincoln first inspired Max Roach to use voice in his music and Abbey used screaming for the first time on the suite in the piece “Triptych” to convey anger and despair. The music was first performed at NAACP fundraisers and conventions. Abbey Lincoln displayed honesty and courage at the time to use her music to make people aware of what was going on around them. After recording the suite, people that had invited Abbey Lincoln and Max Roach to record stopped asking as the album caused some controversy because of its social content. It was actually Nat Hentoff that extended a hand and recorded the suite, then asked Abbey to record her own album, Straight Ahead, on which Mal Waldron wrote and played, who was Billy Holiday‘s last piano player. This album also caused controversy because of its honesty and social commentary.

Abbey would star in two more films in the mid 1960s: Nothing But a Man and For the Love of Ivy. By 1970, her marriage with Max Roach ended and she moved back to California. Throughout the 70s and 80s, Abbey Lincoln recorded on small independent labels and would not be in the spotlight again until she was called upon by Jean-Philippe Allard of Verve Records/France in 1989 to record the album The World Is Falling Down which was released in 1990. Her later recordings were much more introspective and philosophical than her previous recordings, but were honest, emotive and heartfelt as always. Her last album, Abbey Sings Abbey, was released in 2007.

The live performances from the early 1960s that are featured below are of the songs from the socially conscious, often unsettling, urgent and intense We Insist! – Max Roach’s Freedom Now Suite. These jazz musicians are masters and innovators of their craft, so prepare to be blown away. Enjoy.

Driva Man and Tears for Johannesburg:

R.I.P. Abbey Lincoln. We need more artists like you.

Be sure to stop back next time for more Old Soul.
Peace-
Deb