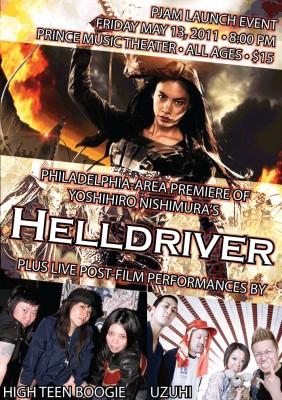 The Philadelphia Japan Arts Matsuri (PJAM) is a four-day festival planned for early July 2011 as a fundraiser to benefit the Japanese Red Cross. The festival will feature Japanese film, music, and art, and will extend to include local performers and artists. PJAM is organized by a collective of Philadelphia-based Japan enthusiasts.

But first, PJAM took us to Hell for a good cause on Friday, May 13th with Yoshiro Nishimura’s newest splatter epic, Helldriver at the beautiful Prince Music Theater. An over the top opus of outlandish gore and side splitting slapstick humor, Helldriver continues the tradition of Nishimura’s previous films and collaborations such as Machine Girl, Tokyo Gore Police, and Robo Geisha, all of which went on to become international internet sensations. Helldriver is his largest and most lavish production yet. This is a post apocalyptic zombie film of which the likes has never been seen! We have two words for you, “chainsaw katana!”

100% of all proceeds are headed to the Japanese Red Cross.