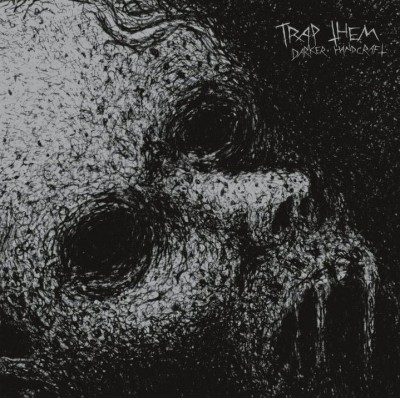 Trap Them hold a special place in our hearts at Blow The Scene, as anyone who follows this site knows. And for good reason; Trap Them have been at the forefront of the current resurgence in d-beat-rooted, death n’ roll sounds many bands are beginning to emulate. With the early release of the vinyl edition of Darker Handcraft nearly sold out, the band continues an incredible web presence with exclusive tracks dropping on major webzines all last week, followed by NPR streaming the album in its entirety until March 15th, when the CD hits streets via Prosthetic Records.

We caught up with Ryan McKenney last September as Trap Them was tracking Darker Handcraft at God City Studios with renowned engineer/producer and Converge guitarist, Kurt Ballou. Per usual, Trap Them released teaser E.P. Filth Rations (2010), between writing and recording a new full-length. This following suit, as the band has alternated a full-length release and follow-up E.P. consistently since their inception. In the same regard that 2007’s Séance Prime was a strong indication of how punishing the forthcoming full-length, Seizures in Barren Praise (2009) would be; last year’s release of Fifth Rations was a taste of what this Prosthetic Records‘ debut, Darker Handcraft has to offer. We were so taken with Fifth Rations that included standout track “Degenerate Binds,” we named it the top release of 2010. We are pleased to hear that Darker Handcraft picks up right where this tasty E.P. left off.

As mentioned before, many bands are starting to incorporate more of the Swedish-influenced death metal and d-beat punk underbelly that bands like Tragedy, From Ashes Rise, and His Hero is Gone first resurrected in the US in the mid 90s. What separates this brand of punk and metal from two-step, standard punk, and traditional rock approaches, is the polyrhythmic sequencing of the alternating kick drum accents under a driving snare that can be accentuated with an infinite number of cymbal accents, pauses, mutes, and fills. This polyrhythmic underbelly falls in line with d-beat-rooted guitars and bass that stop and go in any number of tasty sequences within this timing context. Only a handful of bands actually pull this off well, and even less who try to infuse these d-beat elements with metal. Converge drummer Ben Koller and guitarist Kurt Ballou took this idea about as far as it has come with 2009’s Axe to Fall, which sent most bands back to the lab with serious catch-up homework. 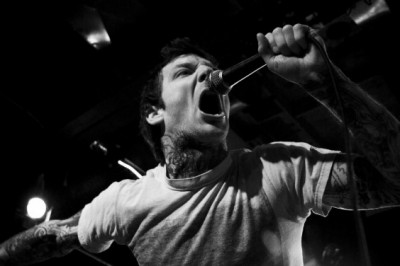 With so much in d-beat-rooted music relying on the drummer, Darker Handcraft benefits from the recent addition of drumming-powerhouse Chris Maggio, formerly of Coliseum, to the Trap Them roster. His ultra-tight execution of varying d-beat structures, laser fills, and ambidextrous ability to execute driving double bass with thick polyrhythmic work on the cymbals and toms, pushes Darker Handcraft to new levels of sonic intensity and maturity.

If you’ve read anything on Trap Them recently, you’ve undoubtedly seen countless comparisons to early Entombed. Most reviewers site this reference in regard the to the “buzz-saw” guitar tones of Trap Them guitarist Brian Izzi. In the past, I too have been guilty of this, but what it really comes down to — is knowing how to incorporate the classic BOSS HM-2 Heavy Metal pedal with your guitar rig (most who attempt to incorporate this pedal in their music end up sounding terrible). Izzi pulls this off as well as anyone ever has, but in this reviewer’s humble opinion, this is where the Entombed comparisons end.

“We take a little bit of that sound [Swedish Death Metal] but as far as song writing and structure we take more from a lot of rock songs. Brian and I love Hot Snakes and things like that. What people don’t realize, that’s more what we pattern what we do, it’ more of a rock feel. Kurt noticed that right away. There was a couple times he pulled out Queens of the Stone Age and stuff like that and we were like ‘Ya. We like em. Of course we like em.’ And of course that different stuff influences us, it’s catchy and there’s no compromise in the song writing just for accessibility, that’s kind of how we take our song writing in this band.” Says singer Ryan McKenney on Trap Them’s latest full-length.

From the opening notes of “Damage Prose,” right into “Slumcult & Gather,” you know you’re in for a Trap Them shock and awe campaign. Driving double-bass with meaty tom accents are buried under an onslaught of crushing riffing from Izzi and bassist Stephen LaCour, which is simply eargasmic. Izzi and LaCour play almost as one cohesive instrument. It’s difficult to tell where the guitar distortion ends and bass begins. Hats off to Ballou in this regard. His analogue recording techniques really shine through as he is able to capture a gargantuan sound that displays God City’s trademark low-end presence that gives the record a natural authenticity. There are only a handful of engineers in the world could offer something even remotely comparable.

And let’s not forget about vocalist/front man, Ryan McKenney with his patented guttural scream that is simultaneously brutal and well-executed. The natural distortion in McKenney’s vocal presence that makes for an intense live show, translates extremely well on the recorded versions. The vocal presence is emotional, brutal, and surprisingly understandable. You are probably going to need the liner notes for certain aspects, but McKenney‘s vocal presence is like the Phil Anselmo of punk-flavored, Swedish death n’ roll. 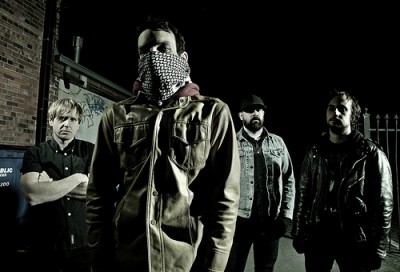 In regards to the lyrical approach on Darker Handcraft, McKenney comments “I’ve always respected fictional writers and creating stories and story-lines and novels around a specific idea and having them reflect into something recognizable and comparable in real life. And that’s kind of the influence I took when I started doing this. I started immediately with the days being numbered and things like that because I knew what I was gearing towards. It’s been a progression. Each release is sort of a different thematic element of the same storyline. After a while it just became much more liberating to write in that way than a verse-chorus-verse-chorus type of lyricism. I’ve never been good at that and I’m probably never going to be that good at that. I have to write in a paragraph. I’m not a catch phrase guy, I’m more of a couple sentences guy.”

The songs of Darker Handcraft have two decidedly different feels. One the one hand you have tracks “Damage Prose,” “Slumcult & Gather” and “All By The Constant Value,” that are crushing, d-beat-rooted, Swedish Death n’ roll onslaughts. Tracks “Saintpeelers” and “Sovereign Through The Pines” even take it up another notch with heavy grind influences, blast beats, punctuated by shrieking high-end guitar fills and meaty refrains. Now on the other hand, you have tracks “Evictionaries,” “Drag The Wounds Eternal,” “Scars Align” and the “The Facts” where the Hot Snakes and rock influences become much more apparent. Here, Maggio frequently opens up the drum beats and allows room for Izzi and LaCour to rifle off riffs that are slower, but executed with a poignant veracity that allows for subtle melodies to creep in as leitmotifs throughout.

The two prevailing sounds find common ground on tracks “Every Walk a Quarantine” and “Manic in the Grips,” where rock n’ roll meets the Swedish death-metal influences for two songs that bridge all of the divides and find Trap Them once again pushing their sonic maturity to new heights.

All-in-all, Darker Handcraft is the best heavy release to kick off 2011. Simply bulletproof.