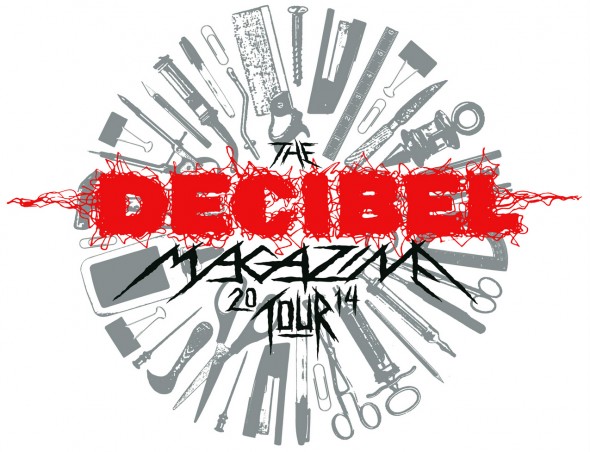 Below is a sweep of what you can expect.

Guilty of producing Decibel Magazine‘s #1 album pick of 2013, Surgical Steel (Nuclear Blast), Carcass embark upon their first sustained domestic tour in five years. Pitchfork commented on the album “Surgical Steel succeeds brilliantly in its return-to-form mission. The record plays like a big, bloody kiss planted on the cheek of longtime fans; at the same time, it’s clearly a selfish statement, the overdue fulfillment of Walker and Steer’s desire to rewrite their pet project’s final chapter.”

Gorguts are touring in support of their critically-acclaimed album, Colored Sands (Season Of Mist) which is the band’s first studio effort since 2001. “Let me know if you can find a metal band that utilizes dissonance and technicality to a large degree that doesn’t cite Gorgut‘s masterful work as an influence..Enter Colored Sands, the long-awaited opus that exceeded the expectations of just about the entire metal community and became the strongest death metal release of 2013..” AngryMetalGuy.com

“Baltimore, MD-based death thrashers Noisem unleash their debut LP, Agony Defined, via hometown label A389. These kids (really, the members are between 15 and 20 years old) offer up a raw and manic amalgamation of ’80s thrash and ’90s death, combining the styles of Slayer and Kreator with Morbid Angel and Cannibal Corpse.”- Exclaim