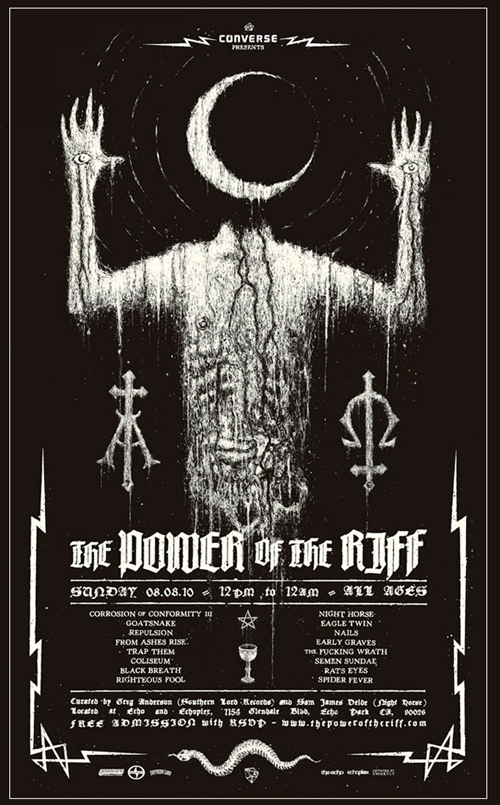 Los Angeles concertgoers will be treated to a free, all ages live performance showcase on August 8th featuring a wide spectrum of artists that transcend generations of rock, punk and metal fans at the first ever; Power of the Riff Fest curated by Greg Anderson of Southern Lord Recordings and Sam James Velde of the band Night Horse. The Power of The Riff Fest will also feature a record swap meet of local stores such as Vacation Vinyl, Origami Vinyl, and pop up stores by Tee Pee Records, Southern Lord Recordings and more during the 12-hour event running from 12pm-12am. Concertgoers will be required to RSVP for the free event at the Official Registration Website.

The Official Line-up is slated as follows:

There is not a weak cog on this bill and we at BTS would like to put a spotlight on some extra-special billings.

First off, headlining the event is Corrosion of Conformity, who earlier this month announced they have recorded a new seven-inch single, “Your Tomorrow (Parts 1 and 2)”, and have reassembled the Animosity era line-up after 20+ years. With the 25th anniversary of Animosity approaching, original members Woody Weatherman, Mike Dean and Reed Mullin have knocked off the rust and will be kicking off a short tour run July 30 in Ashville NC. Although COC never achieved the commercial success of their musical peers Metallica, Slayer, and Megadeth, the band broke onto the scene in 82′ and has had an immeasurable impact on modern thrash and heavy metal. To many fans, this relative “underground” status is part of the magnetism COC offers that transcends fans of metal, punk, and thrash. Their early sound can best be described as 80s punk-thrash that later developed into metal and eventual doom and sludge motifs. Members of COC have gone on to work with bands such as DOWN and Superjoint Ritual, as COC has toured with dozens of legendary acts throughout the past two decades ranging from Motorhead to Pantera.

Corrosion of Conformity Performing the Socially Poignant “Intervention” from Animosity in 1985 Live:

From Ashes Rise are another on of our all-time favorites at BTS. Formed over 13 years ago in a Nashville Tennessee basement, From Ashes Rise helped to mold a niche d-beat punk sound with bands such as Tragedy and His Hero is Gone that put an American hardcore spin on sounds originated by European d-beat pioneers Discharge and The Varukers in 80s and early 90s. Combining elements of crust punk and even thrash, the band quickly became an true underground phenomenon. Without achieving any sort of “commercial success” by industry standards, the band is regarded as one of the best all-time American hardcore punk outfits. From Ashes Rise released standout album, Nightmares in 2003 that permanently etched the band into the history of the most important punk albums ever released. To the dismay of their cult-like following of fans, From Ashes Rise announced they would be calling it quits following a successful tour with legendary UK outfit SubHumans in 2005. After four years of time off, the band played their first show back this past February in Portland OR to a plethora of fans that trucked in from all over the US that saw the band more energetic and tighter than ever. From Ashes Rise released Live Hell on March 16, 2010 through longtime label Jade Tree. Live Hell features 13 live tracks recorded in Los Angeles in the spring of 2005 and is a limited vinyl pressing of only 500.

From Ashes Rise Live at The 2010 Maryland Death fest

Modern d-beat crusaders Trap Them will also be performing. And LA, you are one of the few lucky cities to that will be graced by the band in 2010 as Trap Them has severally scaled back on dates and tours. Trap Them have been batting a .1000, with solid release after solid release. Decibel Magazine recently ranked Trap Them’s 2008 full-length Seizures in Barren Praise one of the Top 100 Greatest Metal Albums of the Decade. And 2010’s follow-up E.P. Filth Rations is icing on the cake. The first distant rumblings of this powerhouse group came in early 2001 when vocalist Ryan McKenney and current guitarist Brian Izzi met in a record store in Salem NH. The two would stay in close contact for the next several years before orchestrating their E.P. Cunt Heir To The Throne and follow-up full-length breakthrough,Sleepwell Deconstructor, both released in 2007. Enlisting Kurt Ballou at God City Studios as engineer, the band has captured an absolutely enormous sound that picks up where bands like Entombed and Discharge left off. This is grind infused metal and d-beat punk and its finest. Trap Them’s live show is always full of unpredictable raw energy and emotion and LA should expect nothing less come Aug 8.

For our last spotlight feature of The Power Of The Riff Fest, we would like to take a moment to focus on relative new-comers to the dbeat punk and metal scene; Black Breath. Think of euro-influenced black-metal meeting new-school punk rock in a dark alley, and you can begin to get your head around this inivative quintet. The riffs cruise at blast and grind paces only to be complimented by classic punk beats and metal fills that leave room for a memorializing amalgamation of sound. Toss in the occasional southern flair action on the geetars’ and you’ve got yourself a rager of a show. Black Breath’s latest L.P. on Southern Lord, Heavy Breathing is an instant classic. Heavy Breathing has been picking up steam as the band has recently completed tour runs with Converge, Victims, and other leaders in the extreme music world. This group of up-and-comers is a DO NOT MISS at The Power of The Riff Fest 2010. Ya’ll been warned.. and don’t forget to RSVP!