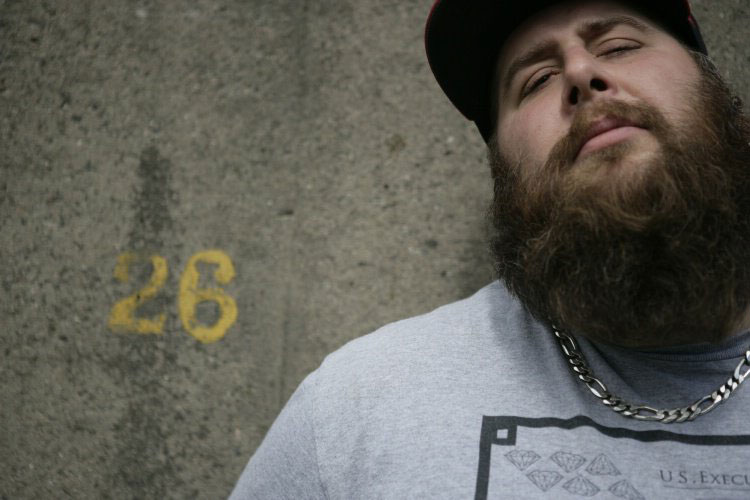 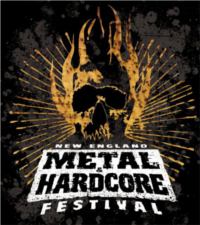 The New England Metal and Hardcore Festival is an annual concert event hosted at The Palladium in Worcester, Massachusetts since its inception in 1999. NEMHF features scores of the most sought after and heavily followed hardcore and metal bands on the planet. The 2011 New England Metal and Hardcore Fest kicks off in one week, with this year’s featured bands including Between The Buried and Me, Hatebreed, Biohazard, Nails, and The Greenery, to name just a few. We caught up with show organizer and talent buyer, Scott Lee, for an exclusive Q & A in the hours leading up to the opening ceremonies. For those just crawling out from under that musical rock, you can peruse the line-ups of years past here. Apart from just providing a space for bands and labels to get their product out, NEMHF also helps support non-profits like Rise Above who were established to respond to the growing need to give youth in foster care opportunities that will give them a sense of normalcy, provide comfort, and build self-esteem. Rad!

Joshua BTS: Ahoy Scott! Thank you for taking a few moments with Blow The Readers around the world as we close in on the opening ceremonies of The New England Metal Hardcore Fest, kicking off Thursday, 4/14/11, 1:00pm at The Palladium in Worcester, MA, USA! What do the final hours look like for you as you prep for the show?

Scott Lee: Advancing, sleeping, eating, getting excited, and watching it all come together!

Joshua BTS: With so many great bands performing, how do you choose who goes on what day and when?

Scott Lee: It’s different every year. There is basically no formula.

Joshua BTS: Anything that is new or unique to the 2011 NE Metal Hardcore Fest, as opposed to years prior?

Scott Lee: We are trying to do the Thursday show with younger bands and seeing what happens with that. There’s going to be tons of vendors, cool stuff, and giveaways. It’s a circus of metal and hardcore. Just get into it! 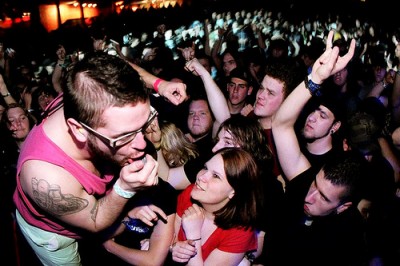 Joshua BTS: Take us back to the early days of NE Metal Hardcore Fest. What originally sparked your interest in creating this type of festival? How did you initially get the buzz going and how have you had to adapt to keep yearly attendees interested?

Scott Lee: It came from going to other festivals and seeing how bad they did it and trying to make it better. I keep people around me that can advise me both young and old. The staff at Mass Concerts are great people. We adapt to conduct cool promotional ideas.

Joshua BTS: For our vegetarian and vegan readers, will they need to pack some tofu in a lunchbox or will there be some veggie grub on hand for us herbivores throughout the fest?

Joshua BTS: With a history of so many successful fests in New England, do you have any plans or intentions of sparking multiple fests in different parts of the country? Or possibly a touring package?

Scott Lee: We have a tour this year called ROAD TO METAL FEST that includes LIONHEART, LEGEND, MONSTERS, THE GREAT COMMISSION, and THE GREENERY. Also, we have a yearly music festival called ROCK AND SHOCK every October, which is a horror convention mixed with metal music.

Joshua BTS: What is your personal favorite aspect of booking and running the fest?

Scott Lee: Seeing all of my friends and bands and people that come in from all over the world.

Joshua BTS: What is the most stressful aspect/s of booking and running the NE Metal Hardcore Fest?

Scott Lee: Everything! It’s all stressful.

Joshua BTS: Most memorable performance/s you have witnessed at a NE Metal Hardcore Fest?

Scott Lee: There’s a few. THE ACACIA STRAIN playing second stage first in 2004. All the years that MESHUGGAH played. We actually did a very first show with DRAGON FORCE, their first US show ever.

Joshua BTS: Any final thoughts or shout-outs as we count down to game time?

Scott Lee: Yo, big shout out to my friend LEAH URBANO of Crimson Management, SYLVIA CUNHA of Mass Concerts, Gina Migliozzi of Mass Concerts, and Swiss the tour manager of THE ACACIA STRAIN. I am so excited for this year and especially VANNA, MYCHILDREN MYBRIDE, STRAY FROM THE PATH, and ARMOR FOR THE BROKEN. I’m looking forward to seeing BIOHAZARD, BURY YOUR DEAD, BLOOD FOR BLOOD, and TIMES OF GRACE. Thank you. Peace! 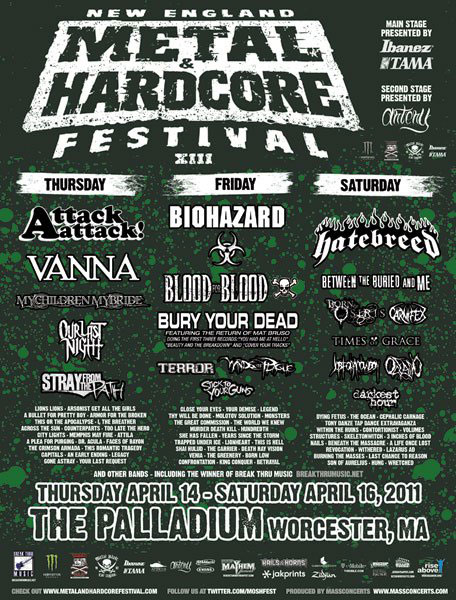 The lineup for Thursday 4/14/11 is:
Attack Attack
Vanna
My Children My Bride
Our Last Night
Stray From The Path
Lions Lions
Arsonist Get All The Girls
A Bullet For Pretty Boy
Armor For The Broken
This Or The Apocalypse,
I, The Breather
Across The Sun
Counterparts
Too Late The Hero
City Lights
Memphis May Fire
Attila
A Plea For Purging
Dr. Acula
The Crimson Armada
This Romantic Tragedy
Capitols
An Early Ending
With Words
Legacy
Gone Astray
Your Last Request

Bands scheduled for Friday 4/15/11 are:
Biohazard
Blood For Blood
Bury Your Dead
Winds Of Plague
Stick To Your Guns
Close Your Eyes
Your Demise
Legend
Thy Will Be Done
Molotov Solution
The Great Commission
The World We Knew
Murder Death Kill
Hundredth
She Has Fallen
Years Since The Storm
Terror
Trapped Under Ice
Lionheart
This Is Hell
Shai Hulud
The Carrier
Death Ray Vision
Venia
The Greenery
Born Low
Confrontation
King Conquer
Betrayal
Faces of Bayon
Kali Ma