Earlier this week, I had the pleasure of catching Marc Brownstein and Chris Michetti together while zipping around in Marc’s sports car as Conspirator‘s new 7 day Summer tour was kicking off. We touched on everything from lead guitarist, Chris Michetti‘s permanent addition to the band, to the future directions of popular electronic music. Speaking with Marc Brownstein is always a lot of fun, and it sounds like this short Conspirator run is something we fans would be very unlucky to miss.

Conspirator kicked-off this week long sprint at The Stephen Talkhouse in Amagansett, New York on Tuesday July 19th, moved up to Daniel Street in Milford, Connecticut Wednesday night, and will play the Stone Pony in Asbury Park, New Jersey tonight. The band is debuting 6 new tracks during this tour, wetting fans’ appetites as we head into Jam at The Grove 5 in Ottsville, PA on August 13th.

Remaining Conspirator 7 Day Tour dates, and links to buy tickets, can be found below:
Conspirator 2011 Tour 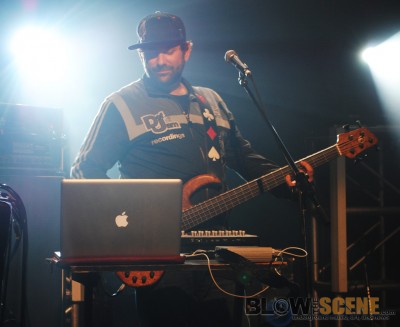 Marc Brownstein – I do have a tour bus, but its getting cleaned.

Marc Brownstein – We’re on a 7 day tour, so I just like to take my sports car.

TJ – So how excited were you to kick-off this 7 day tour at the Stephen Talkhouse?

Marc Brownstein – I was flipping out. I swung out to JFK Tuesday, picked up Michetti, and we headed out to the beach. I got the car in sports mode, and we tore up the Eastern Long Island highways.

TJ – What can Conspirator fans expect from this 7 day tour?

Marc Brownstein – We’ve got like 6 new songs! So, if you haven’t seen Conspirator at either The Blockley or Camp Bisco…you can expect a whole new show.

Marc Brownstein – We’re working on 3 or 4 others now, as we speak. Its a non-stop thing with us. Everyone is always working on a new song at this point. We’re remixing Avicii, 12th Planet, and Porter Robinson. We’re waiting on stems from Borgore and Feed Me too. There’s going to be a lot of collaborative efforts going on with some of the top Electro artists of our time right now.

TJ – Wow those are some really big names Marc. 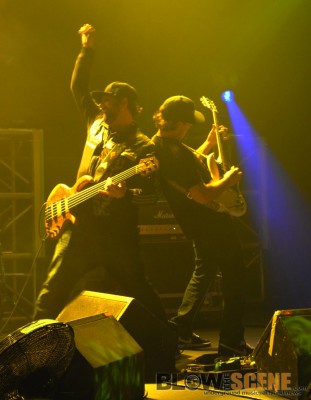 Marc Brownstein – Yes! Well, we work with these people. Most of them were at Camp Bisco this past weekend. We’ve written a lot of new songs within the last 3 months, and we’ve learned a lot as well. Chris (Michetti) has brought a lot to the table in terms of production techniques, and opened my eyes to the more current style of popular electronic music. Our goal is to work with all of these people and remixing them.

Michetti’s dubstep project, which is about to be launched, just remixed “Seek Bromance”, the Avicii song featuring Tim Berg. Now, this is a song with 49 million hits on Youtube. It was a gigantic dance hit. So, we got Avicii to give us the stems…and now we’re doing a Michetti remix as well as a Conspirator remix. Both of them are banging. We just played both of them here in the car while we were waiting for your call. They’re both at the level. Michetti’s is a dubstep remix, and Conspirator’s is an electro remix in pure club head style.

I feel that was exactly what Conspirator needed to get out of the jam band world, and embrace the electronic music world. We already work with the people at the top of the jam band scene. We already play all those festivals, with all of those great musicians. From the guys in The Grateful Dead to the guys in Phish. This has been our world for the past 15 years. So, now with The Disco Biscuits and Conspirator playing both Ultra Music Festival and Nocturnal, working with Insomniac events, and the Biscuits playing Identity Festival, we’re breaking into a whole new world with a whole new slew of artists.

Having Camp Bisco being one of the top festivals for this new world of electronic music puts us in a great position with all of these artists. All of those top artists want to play at our sold-out, 25,000 person festival. That’s how you break yourself to the electronic music scene in the Northeast at this point. Camp Bisco is the Ultra or electric Daisy Carnival of the Northeast. So, we’re trying to leverage that position to bridge the gaps from promoter, to band, and now from musician to musician. We want our relationships to be all about the music.

TJ – Ya know, as a big fan of both genres myself, I can’t tell you how happy I am to hear everything you just said.

TJ – Tell me, since you’ve got Michetti in the car, what finally made him claim his spot as lead guitarist for Conspirator?

Marc Brownstein – He’s the “fucking greatest” is how he got the spot.

TJ – Haha. I agree with you, but he wasn’t official until just recently right?

Marc Brownstein – Well Michetti is actually becoming a full partner of the band in the near future, yea. We just saw it as a natural progression, which is how we feel it will eventually happen with the drummer position too. When things happen naturally, that’s when they turn out the best. We met him through a chance meeting, he played with The Disco Biscuits for a couple weeks, he sat in with Conspirator at Camp Barefoot last summer, and just became obvious he was something we wanted to move forward with. It’s been long enough already. When we’re thinking about taking a show, and Michetti is not available for it, we don’t take the show at this point. What does that mean? It means he’s in the band! Bam!

TJ – Well, we couldn’t be happier with the decision. You two have amazing chemistry together on stage.

Marc Brownstein – Good chemistry, yea! Loyalty. That’s what it’s all about dawg. We’ve done a lot for each other this last year. We’ve taught each other a lot. I’ve said it in other interviews. At no point as a musician can you ever stop learning. That’s the difference between being a musician, and so many other things.

Unlike sports, where you hit a physical peak in condition, there becomes a time where…

Marc Brownstein – Look at that cop up there.

Marc Brownstein – what was that?

Marc Brownstein – What was that guy doing?

Marc Brownstein – …ya know, they hit a peak in their career. In music, its not like that. You can keep getting better into your 40’s and your 50’s if you commit to always practicing and working at it.

For us, it’s about trading secrets. I’ve taught Chris about the way we improv, and what we like to call “The Confident Patience”.

Marc Brownstein – The restraint in our jamming technique on stage.

Chris Michetti – Being your own person, and not trying to be someone else.

Chris has taught me to use the computer at a level which I never thought I would get to. I’m a bass player, and I never dedicated myself to learning everything about the synthesizer. I was just having a big preset party. Michetti taught me how to get off the presets, start with an initial patch, and build from scratch. I know I could work with the synth for the next 5 years, and never learn every knob and switch. You can always learn more. There’s always going to be new technology, and new styles of music.

Moombahton is what we’re getting into now. What’s Moombahton? Do you know?

Marc Brownstein – It’s Reggaeton mixed with Dutch House. 110 BPM, we’re down with that shit dude. That’s how you party. We’re moving through the shit show fast man. We move from 140 to 128 to 110, and we’re just trying to keep up.

What I want to do, and I was just talking to Michetti about this, is catch up to the Moombahton…but get ahead. I can’t tell you what we’re trying to do, because I don’t want other people to try it out before we try it out. But we have any idea of what the next thing is gonna be, and we plan on doing it, now, this week. We’re going to start working on the next new style of electronic music.

Chris teaches me how to make the sounds, and then I bring the forward thinking into it. We put all of our skills together, and that’s why Conspirator has progressed so far since Michetti has become a part of it. We’re all progressing, writing, and working on new styles together. It’s really exciting.

TJ – You were talking about the drummer position before. Is Mike Greenfield from Lotus the featured drummer for this tour?

TJ – Do you anticipate Dan Shearer will be playing more with Conspirator after The New Deal has finished their final run?

Marc Brownstein – Oh that crazy bastard. I love that crazy bastard. Yeah! This is what I was saying before. We’re not looking to lock down who is going to be playing with us right now. During this upcoming fall tour, Shearer is actually on his honeymoon.

Marc Brownstein – It would have been him for the fall tour, but now it’s looking more like a mix between Allen Aucoin, Mike Greenfield, and Adam Deich.

We want to lock it down eventually, but we don’t want to force the issue. I’m ok with any of these guys playing with us, because they’re all “the best”. If I have to pick between the 5 best drummers in the country, i’m ok with any of them. We just want it to happen naturally. It’s like getting married.

You just know when its the one.

TJ – If you had one quote for this 7 day tour, what would it be?

Marc Brownstein – We’re like the Ron Jeremy of electronic music.