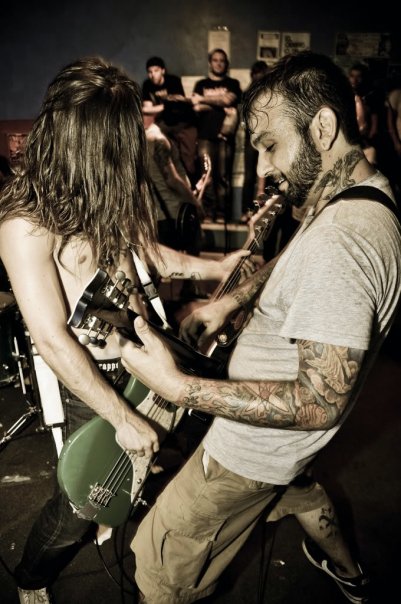 Los Angeles-based hardcore act Alpha & Omega are jetting over to Germany this week – for the start of their first European tour – but not before answering a few questions via cyberspace from BTS’s unruly Assistant Editor, Andy McNeil.

The band is touring in support of their latest album Life Swallower (6131 Records), which was released this past summer (July 2010). The album was recorded with Paul Miner of Buzzbomb Studios – who has worked with bands such as H2O, New Found Glory, Terror, Thrice, and Death By Stereo.

Andy BTS: Guten tag, herren!  Alpha & Omega are set to sail across the Atlantic for the band’s first European tour.  I noticed that seven of your twenty-three tour dates are in Germany.  Have you guys been cultivating a following there or are you just amped to see a lot of Hasselhoff?

Aaron: It’s all about the Hoff. Not really. We’ve been told that we do have a strong following over [in Germany] and we are lucky that the routing is taking us there.

Andy BTS: What are your expectations for the rest of the European tour?  Do you have any preconceived notions about how the audiences will respond?

Aaron: We were just on a tour with Bane and Trapped Under Ice, so we are expecting nothing less than amazing. We feel like kids have been waiting to see us since we released our EP a few years ago, so I’m confident we will do well.

Andy BTS: Your band’s influences are listed as Cro-Mags, Crowbar, All Out War, Stigmata, Integrity, Leeway and Metallica.  I can hear the old school hardcore influence of NYC’s Cro-Mags and your vocalist’s delivery has a tinge of drawl à la New Orleans’s Crowbar.  The only one that confuses me is Metallica.  I assume you’re talking about the And Justice For All-style Metallica, which I remember blasting from dudes’ Walkmans while on the bus to elementary school – not the shameful St. Anger/Some Kind Of Monster era material.

Aaron: Nothing after The Black Album! Ha! We all grew up listening to these bands and we definitely are heavily influenced by Metallica. It was most of our first metal band we got into.

Andy BTS: Just as the name Alpha & Omega is a combination of two polarized ideas – the guitar tones on Life Swallower often share this same contraposition.   What was the creative thought process behind using such arena-like tones during the solos opposed to the chunkier distortion that shoves along the rest of the album?

Aaron: It was just the way it sat in the mix better – to be honest. It gave it a little more breathing space. They weren’t blistering solos, so the reverb didn’t mush them up.

Andy BTS: Any desire to address the thematic bits of Biblical concepts used in Life Swallower or Devil’s Bed?

Aaron: I know for Luis (vocals), the Devil’s Bed EP was written about his childhood. He grew up with parents that were pastors. Life Swallower is more about the shit in life everyone goes through, whether it be drugs or other vices. A lot of the lyrics are written to where almost everyone can identify with them.

Andy BTS: You’ve played with major hardcore acts such as Madball, Terror and H2O over the course of several years and three U.S. tours.  Who was your favorite act to play with and what is your favorite venue/city to play?

Aaron: It definitely has to be this last tour with Bane, Trapped Under Ice and Cruel Hand. We have toured with all of them separately, and they are all amazing dudes. We have become really close friends over the last few years, and you can’t ask for anything more than that.

Check out more about A&O: