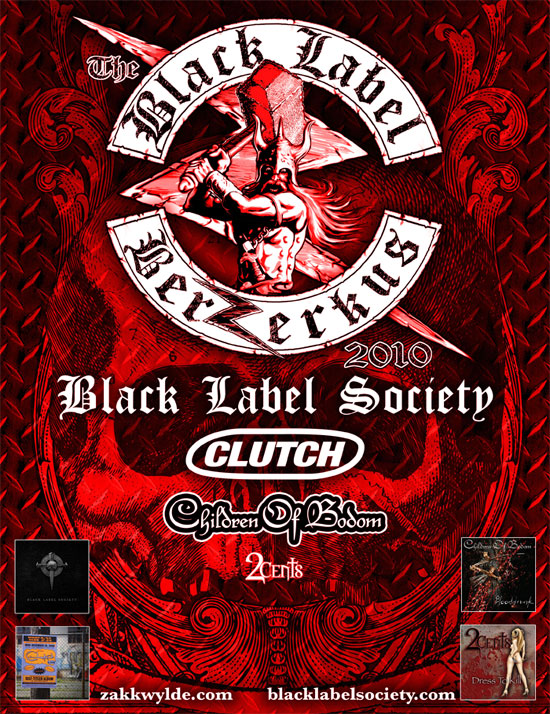 As many people already know, the “Hard Rock” bar and restaurant has nothing to do with hard rock. Besides the Natalie Merchant album on the wall, there was a steady stream of non-rock bullshit venting through the speakers, leading one to imagine that somewhere in the universe is a Contemporary Jazz Cafe that plays nothing but death metal. Management would have done well to take a lesson in rock, much like the Finnish band Children of Bodom must have.

These guys know how to put on a live show, though to the most basic of metal premises. Unintelligible screaming; long, fast, high-pitched thrashing solos; drummer pointing his sticks to the crowd; lead singer spraying spit into the air and telling the crowd how much “you motherfuckers rock!”

Though the five piece band have been playing since 1993 and are relatively popular in their homeland, Children of Bodom have reached little notoriety in the states, and that may be due to the fact they bring little originality to the table. They are energetic and their enthusiasm is admirable. The music is decent, but nothing unlike any preconceived notion on what a Scandinavian metal band would sound like, including quasi-Gothic intros (some long audio sample about pain) and keyboards, which were laughable. At one point the singer addressed the crowd to say the next song was about whiskey (I think), the stage lights went red and a few Casio-like notes came forth, which instantly killed the mood. This happened a few times.

The most inspired performance came from drummer Jaska Raatikainen, whose quick and forceful command of the kit left me in awe that he wasn’t breaking a sweat. Lead singer/lead guitarist Alexi Laiho was also impressive in his dual role, sans outdated metal scream.

The band order was curious, as well. While the opening act 2 Cents wasn’t ever intended to be witnessed (who rocks at 6?), Clutch should not have been their follow-up. Clutch is good old American rock, a blend of heavy rock elements and bluesy guitar work, which would have been a better contrast and transition to Black Label Society. Children of Bodom are aurally and visually closer to the headliners, thus it almost felt like one long set played by two bands, albeit with much more control and authority by BLS. Furthermore, there seemed to be a strong Clutch contingent, judged by the amount of fan wear seen throughout the night.

What was witnessed of Clutch (overpriced beers at aforementioned bar) was enjoyable and met expectations: long groovy jams and guitar work, followed up by singer Neil Fallon’s raspy vocals, and his ability to be more theatrical with his gestures as he wasn’t wielding a guitar. They closed with a song most appropriate for the occasion, the “Black Label Society Berzerkus,” full of thumping drums and thick, pounding guitars and bass, which were all in unison. 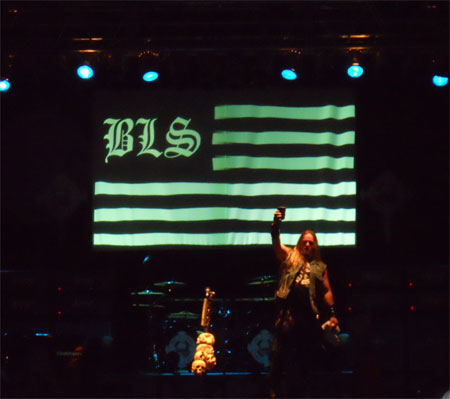 The venue for this occasion was unexpectedly fitting. The ill conceived Trib Total Media Amphitheater is enclosed by green Mt. Washington on the right and the Steel City on the left, with a river and train tracks juxtaposed. Barring the train’s appearance were some plywood boards, and the general admission flooring was…a parking lot? Yet viewing the city with the commotion of interstate traffic and trains seemed to benefit the musical intake, along with the constant smell of gyros. There was not a large crowd, a few thousand perhaps, with little headbanging or fist pumping outside the front-and-center pit.

The first thing noted about Black Label Society, once their huge banner dropped to announce the start of their set, were the ten stacks of Marshall amps. Every drum kick beat could be felt in your chest, and if you stood on one leg, your pants would vibrate. Next came the overpowering smell of ganj, which along with cigars, were curiously ever present throughout Black Label Society‘s set. There was also a video screen above the drummer, which brought little extra, mostly swirling colors and what looked like comics of Armageddon dabbled with the band’s logo.

Zakk Wylde’s band [BLS] plays with much power and precision and near-constant. There were no breaks for the first few songs, and breaks afterwards would still involve someone playing. Wylde’s five-plus minute solo might have been a bit extreme, though, however impressive it was at first to witness. He also played a song on the piano, a tribute to Dimebag, which brought out the lighters and the necessary ballad for classical metal shows. The video screen here was a stylish addition, with a video of Wylde smashing a piano with a sledge hammer in the middle of a shallow river.

Anyone familiar with a Black Label Society show did not miss anything new, which is not to say it wasn’t enjoyable. Wylde’s vocals were strong throughout the show, and his typical stage presence was there: standing on the raised ledge of the stage to finish out each song with some power chords and then beating his chest like a gorilla. The highlight may have been when he announced the different “chapters” of the Black Label Society, including Pittsburgh’s own Nick Catanese, a founding member of BLS.