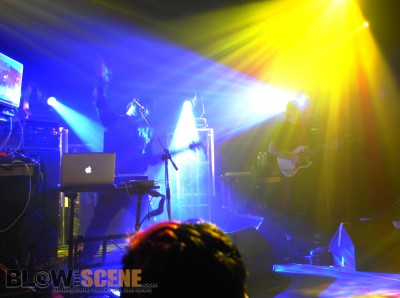 Upon Conspirator‘s entrance, the crowd erupted into a beautiful drunken rendition of “Happy Birthday” for Mr. Marc Brownstein. “Happy Birthday Brownie!” could be heard, shouted every ten to fifteen minutes from within the TLA. Good vibes like these make for amazing music, and Conspirator was ready to hold up their end of the equation.

As a Biscuits fan myself, I usually rate a show by how long it takes for Brownie to shed his assortment of track jackets. Needless to say, the Def Jam outer layer disappeared rather quickly during this set. Magner, Brownstein, Michetti, and Shearer all exuded high spirits during this stop on Conspirator‘s new tour, showing big smiles and a lot of stage activity. Thank you gentlemen for a fantastic show!

– Happy Birthday to Marc Brownstein from EVERYONE at BlowtheScene.com