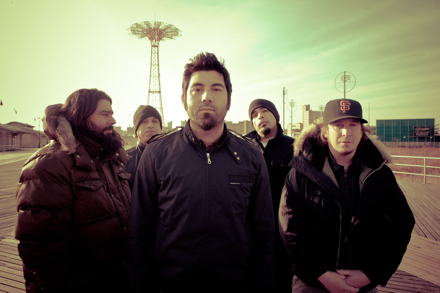 Sacto’s favorite sons, Deftones have just announced a string of Euro tour dates to follow their current US run, kicking off Nov. 12 at the Academy in Glasgow, UK with supporting act Coheed and Cambria for most dates. Deftones are currently touring in support of their latest full-length, Diamond Eyes which was released earlier this year through Warner Brs.

Deftones were dealt a major blow in 2007 when long-time bassist and friend Chi Cheng was nearly killed in a car accident, which left him in a coma. At that time, Deftones were just putting the finishing touches on a new album. Out of respect for Chi, the band decided to put that album on the back-burner and the fate of the band was left uncertain. After recalculating and regrouping the band decided to write and record a different album, which became Diamond Eyes.

Last week, Deftones Drummer Abe Cunningham had this to say in an interview with the Charlotte Observer;

“People expect (it) to be a depressing record given the circumstances. How could it not be about Chi in an indirect way? (But) it’s a very uplifting album. We just turned it into a different situation. It’s really a celebration of life, I suppose…Cheng remains in a minimally conscious state, according to Cunningham. He is awake but immobile and unable to communicate. Although the band would love to have him back, Cunningham just wants to see his friend healthy. “He has a 12-year-old son. I just want him to have some sort of life, whether or not it’s with the band again.”