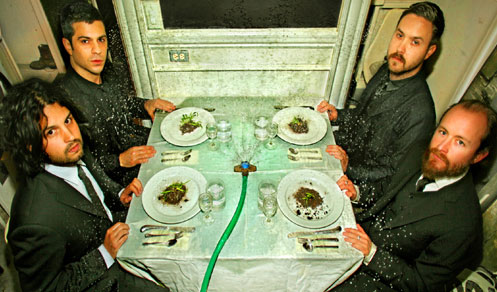 Northern Cali’s prog-rock heroes, Dredg have just wrapped up recording their fifth full-length release with none other than musician/producer Dan The Automator(Head Automatica, Gorillaz, Mars Volta) as they hit the road this week with Circa Survive, Animals As Leaders, and Codeseven for one of the more eclectic bills of the 2010 touring season. What started as a middle-school, musical hobby shared by Dredg guitarist Mark Engles and drummer Dino Campanella, eventually morphed into a full-time project with the addition of vocalist Gavin Hayes and bassist Drew Roulette in late 90’s. Since then, the band has released intriguing full-lengths that are often concept driven with vast visual expressions to accompany the densely layered and often indefinable music. Drawing from musical influences that range from Peter Gabriel to heavy metal and even electronic music, Dredg offer a definite break from the norm. The songs shift from traditional alternative rock signatures to ambient movements, incorporating a wide-array of non-traditional instruments from around the World. I have even heard Dredg jokingly referred to as Enya-core.

After being picked up by Interscope in 2001, the band re-released their first full-length album, Leitmotif on September 11, 2001. Leitmotif introduced the music world to Dredg’s unique blend of visual, conceptual, and auditory artistic expressions. The album would see Dredg tour with with popular, but god-awful, nu-metal acts for the next two years as the band has always had a somewhat difficult time finding complimentary tour mates, despite the fact that Dredg offer one of the most engaging and well-orchestrated live shows of any of their musical peers. Even if you find their recorded works leave something to be desired, I would still strongly advise you to catch these guys live. Dredg shows have always left me with a heavy feeling of contemplation for days after attending a live set. And much like the indefinable qualities of the band’s music, I couldn’t tell you why. Dredg performances are often refreshing as they work in instruments not common in the rock world, such as steel guitars, mandolins, and several horn instruments.

I remember catching Dredg in 2003 with the mighty Glassjaw for a Cleveland performance with a guest saxophone player that was absolutely mind-blowing. I was even more floored when singer Gavin Hayes informed us after the show that he had just met the sax player on the street the day of the show and asked him to hop in for the performance. Unpredictability is something of the norm with Dredg, and every performance is a unique experience worth every penny of admission. I am stoked to see Dredg playing with an engaging and eclectic lineup that includes Circa Survive and the guitar phenoms in Animals as Leaders who are also incredible live with a duel, 8-string guitar attack, complemented by a solo-drummer. “Rad,” is an understatement.