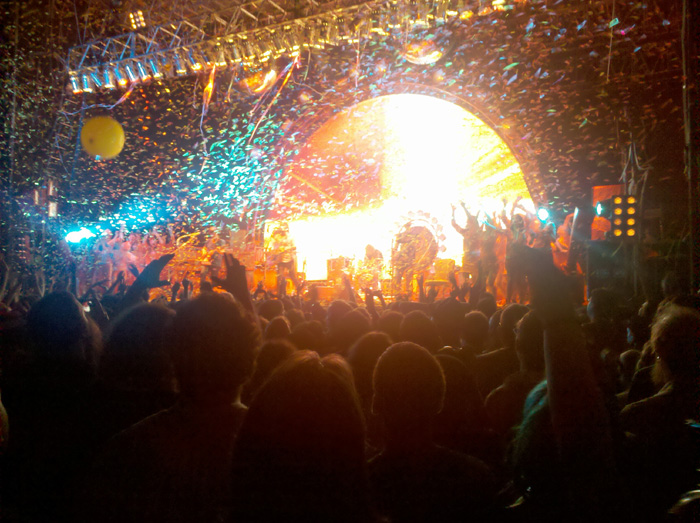 It’s impossible to properly put into words what a Flaming Lips concert is like. You can mention the visuals, the confetti, the balloons, the space bubble/hamster ball, and yet you’ll feel like you’ve only scratched the surface. Wayne Coyne et al like to make seeing the band more of a spiritual experience than just a concert. Being that they just covered Dark Side of the Moon with their friends Peaches, Henry Rollins, and parts of his nephew’s band Stardeath & White Dwarfs, you can definitely get a Pink Floyd vibe from all of the trinkets and lighting, and yet the playfulness of a band like Polyphonic Spree come to mind [sans cult, of course].

The opener, Fang Island, were serviceable at best. At first, you may see their three guitar attack and see one of them tapping away on their instrument with Eddie Van Halen-like intensity, yet without the shredding. Then, notable melodic tappers like Ian Williams [Don Caballero, Battles, Storm & Stress] and Marnie Stern come to mind. And before you know it, you’re kind of digging this band. However, as the songs churned along, each one of them sounded like a separate homage to Weezer, albeit 2000s Weezer. A friend and fan in the audience, Robert Wallace and I had quipped that “[Fang Island] sounded like Weezer in Dropped-D.” This sentiment was echoed amongst others in the crowd. 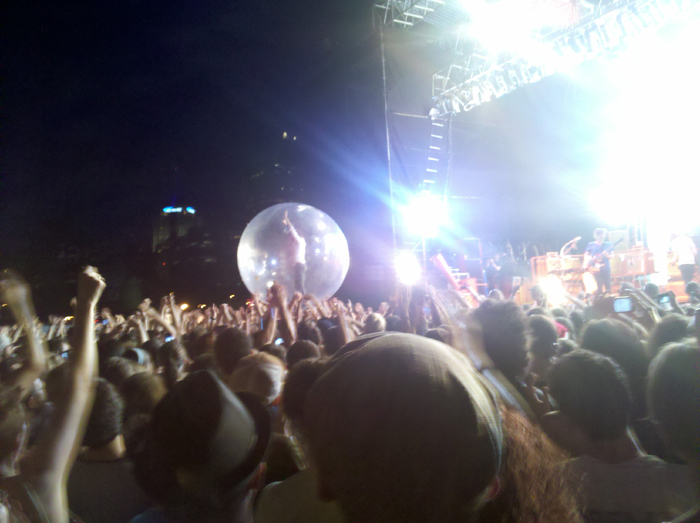 While their set was about 45 minutes and there were plenty out in the area who were enjoying the show, it’s hard to be an opening act for the Flaming Lips, and most of us spent our money to come see the quirky little pop-band from Oklahoma City.

The band was supposedly going to start at 9 PM, but Wayne came out to a roaring crowd to announce that he wanted to “wait 10 minutes so that the people still filing in from the outside could enjoy the show.” Whatta guy, right? At this time, he also spoke about how this was the first time they would be “opening for a train,” as the Station Square Amphitheatre is located next to a railway line.

Wayne noted to members of the audience that he would be rolling out in his space bubble, so they should mind their beers and heads for at least the first few minutes, and then can resume standing around and staring at the stage. This elicited laughter from the audience, and much excitement.

As is the standard for their video performances these days, the giant portal showed a naked woman [engorged in psychedelic colors] doing a “come hither” to the audience, and eventually leaning back for the audience to enter her vagina. As this occurred, the screen itself had a doorway, making for a Stargate-esque portal entrance for the band. 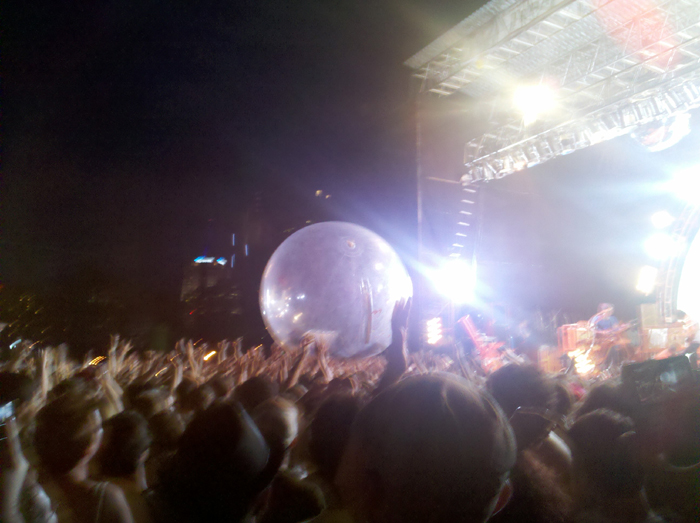 As expected, the band opened with the non-album track “The Fear” with Wayne rolling over the audience. Confetti flew about everywhere, and balloons started getting pumped in. In usual Flaming Lips fashion, the band had random dancers on both sides of the stage, surrounding Wayne and guitarist Steven Drozd.

Then began the first real song of the evening, the stonery “Worm Mountain” from Embryonic. While this got the crowd excited, it was the following cut that introduced the first bit of the crowd singalongs and interaction. Another great song from Embryonic, “Silver Trembling Hands” was played second. Wayne got the crowd to yell “Ai! Yai! Yai! Yai! Yai!” in repetitive fashion, with other gibberish noises. It was very call-and-response based, and the crowd really ate it up. He used this idea in various songs throughout the night, but “Silver Trembling Hands” was probably one of the standouts.

Unsurprisingly, the Lips stayed on this end of the decade of their released works, mainly favoring Yoshimi Battles the Pink Robots, At War With the Mystics, and the aforementioned Embryonic. However, the classic “She Don’t Use Jelly” elicited a giant roar and singalong from the crowd.

At one point early on, a train did actually come by. Wayne had mentioned earlier in the show that the band was so excited about having a train come by, that they actually placed microphones near the tracks and would ask everyone to be silent while we heard the train coming through. Drozd and bassist Michael Ivins helped round out the sound with textures, which only amplified the uniqueness of this event.

Another great highlight [there are oh-so-many] was the extremely stripped down version of “Yoshimi Battles the Pink Robots, Pt. I.” It was Wayne singing along on his acoustic guitar, and the crowd joining in unison. There wasn’t any real percussion or any other instruments; you could just hear Coyne strumming along and having the fans sing along. He commonly referred to us as “motherfuckers,” but in the most endearing way possible. 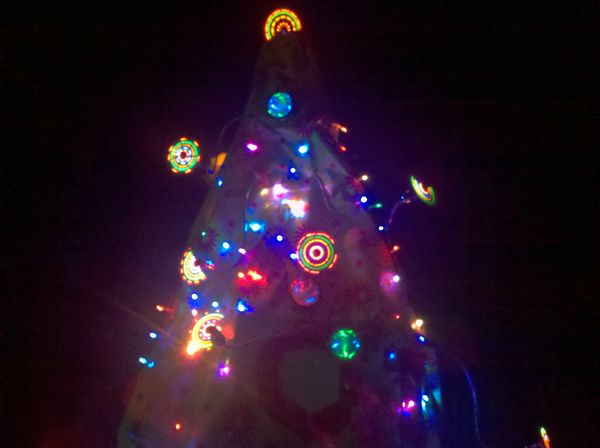 As previously mentioned, the band has videos playing on the Stargate portal in the background during the entire performance. Coyne has a camera next to his mic stand that will pipe in his image, but most of it is being manipulated. One of the better video syncs was to “See the Leaves,” in which you see a girl dancing around with a mallet. Wayne came on stage with a crash cymbal, and would strike it at appropriate moments in the song. The silhouetted woman in the video would strike at exactly the same times, and it wasn’t exactly in a set amount of times. It’s rather impressive how the band synched it up so wonderfully.

One of the other singalong tunes that the Lips played was “I Can Be a Frog,” in which Kliph Scurlock [drums] helped the audience make various animal noises after each verse line in the song.

A notable occurrence during the show was Wayne’s banter on politics. It can be somewhat weary at times, especially if you are a realist, as he praised the Obama administration for being our saviour and asked for a big applause from the fans, which he received. Don’t get me wrong, I don’t dislike the Obama administration, but they have plenty of work ahead of them and have backed out on promises that I thought were tenets of their platform, so I amongst others had a hard time with the political jingoism.

They did also play the famous song “Taps,” as it was used to pay respect to those that have died in various foreign wars, often for the wrong causes, as the band put it. They asked everyone to put up the figurative fingered peace sign in order to use the cosmic energy to bring peace about in the world. It was a very touching and simultaneously hippie moment.

They also went after the war on drugs. Right before playing “Pompeii Am Götterdämmerung,” he dedicated the song to his “friends who are influenced by LSD.” Wayne loves speaking to the crowd, as he talked about dreams and their meanings right before the fantastic “The Sparrow Looks Up at the Machine,” complete with a very strange and dream-like [pun unintended] video to go along with it. 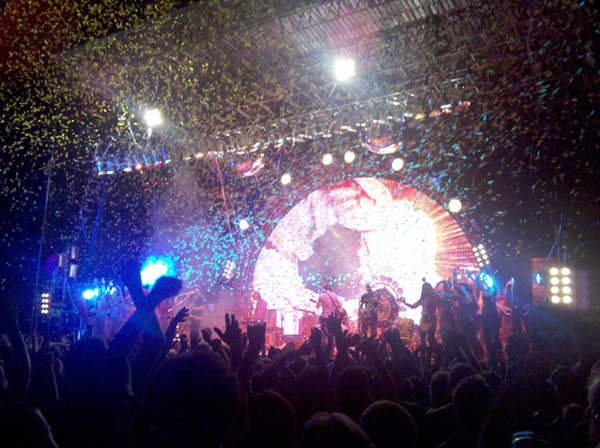 Finally, in true Lips fashion, the band closed with “Do You Realize??,” the official song of the state of Oklahoma and filled with as much bombast as possible. The confetti really took off here, with even more balloons flittering about. It was the perfect end to one of the best shows I’ve ever seen in my life, even if they skipped playing any songs off of The Soft Bulletin and Clouds Taste Metallic.

I made a sincere attempt to put into words how incredible their shows are, but it’s quite an impossible task. I cannot implore you enough to go and see these guys live, as you’ll enjoy every bit of the spectacle and youthful exuberance, innocence, and energy from a band that’s been doing their thing for almost 30 years. It’s not the same as putting on a record, and the infectiousness of those around you will really enhance the experience. Wayne even said a grand thank you “to those of you who wore costumes and dressed colorfully…you make the world a more interesting place and we love you for it.”

Don’t miss these guys, whatever you do.