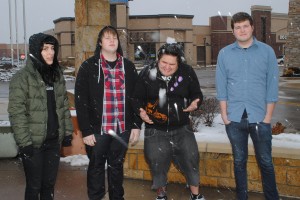 Cincinnati-based indie rockers Mixtapes recently embarked on a journey across the Eastern Seaboard and Midwest in support of the band’s latest release, A Short Collection of Short Songs, a power-packed 6-track EP on the Animal Style Records label.

The band describes their formation as “a long, strange and uninteresting turn of events” on their label’s Web site. The group draws inspiration from the 90s, a decade that was all about casual style and simplistic recording techniques with artists like Beck, Elliott Smith and Pavement, who put a lower premium on recording quality and a greater emphasis on individuality. Growing up with this kind of music blasting from the stereo system, Mixtapes took this ideology and took off with it, blending 90s power pop with that characteristically Midwestern gritty punk and added some unquestionably Indie undertones.

The band – Maura, Ryan, Boone and Michael – rocketed out of the ‘Nati with Maps just over a year ago, and the 18-minute, 10-track EP caused listeners to take notice. Mixtapes quickly followed up with the release of two four-track EPs, which served as small teasers of material to come.

Now, Mixtapes return with A Short Collection of Short Songs, the band’s fourth release that takes the form of a six-song album, available as both a digital copy and a 7 inch vinyl in fun colors, like mellow yellow-orange, lime green, and electric blue. Those who purchase a 7” are privy to a bonus track, as the four-some covers The Hold Steady‘s “Your Little Hoodrat Friend.”

A Short Collection Of Short Songs is undoubtedly Mixtapes‘ strongest material to date and kicks off with “Birthday Party Summer Camp (Helloooo Meeggannnn),” a soulful number that compounds clear and eloquent vocals with blood-pumping bass in the backdrop. Then the band takes a page from the old school 90s playbook with “The Real Hotel California” and “I’m Like,” two songs that serve to awaken Blink-182 from the grave (again), as the tracks are flooded with a bouncy sound, flavored with attitude and pure, gritty punk.

On a few songs the band takes a step back, slows the pace and tones down the reverb. “Soups Whatever” and “Whit’s End” are spectacular pieces that showcase the group’s true vocal talent with dueling duets blended with sweet harmonies. The final track “Anna Maria” is an exquisite work of songwriting craftsmanship. Whereas “Soups Whatever” is lyrically whimsical with lines such as, “I got arrested once for being in that church parking lot; I guess they forgot that I’m harmless,” “Anna Maria” is heart-wrenching with painfully truthful lyrics like, “It’s better to lose yourself than someone else, cause I’m just not prepared and I’m scared.” Overall, A Short Collection of Short Songs is nothing short of infectious.

In addition this latest release, the band launched Castle Songs, a two-track effort that can be downloaded for free from digital label Death To False Hope Records.