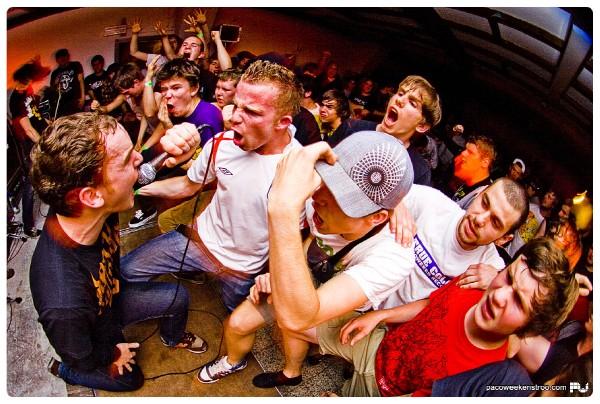 One of our all-time favorites, Belgium’s Rise and Fall, have just announced tour plans with Nails and Harms Way to kick off in Essen, Germany on Nov 19. Rise and Fall continue to support their 2009 release on Deathwishinc, Our Circle is Vicious, which is the band’s third full-length release since their inception in 2002. Combining elements of modern d-beat, metal, punk, and hardcore, Rise and Fall continually blur the lines of genre and niche. The band’s sound draws influence from mainstays Tragedy and Converge, coupled with driving drums beats mixed with dense guitar work that often incorporates subtle melodies and minor chords. The music has a definite sense of urgency and with Kurt Ballou of God City Studios (Converge, Trap Them), at the recording helm, you have a perfect storm of musical annihilation for eager eardrums. This dense musical foundation often leaves room for a highly-emotional vocal attack that has collectively helped Rise and Fall achieve a level of success only a handful of their Belgium peers have seen. Rise and Fall have an authenticity to their sound that is often lacking from next-generation d-beat bands. If you are a fan of Tragedy, From Ashes Rise, and His Hero is Gone – you will dig these guys. Fingers-crossed we get a US tour in the near future.

More on Rise and Fall at their Official Myspace.