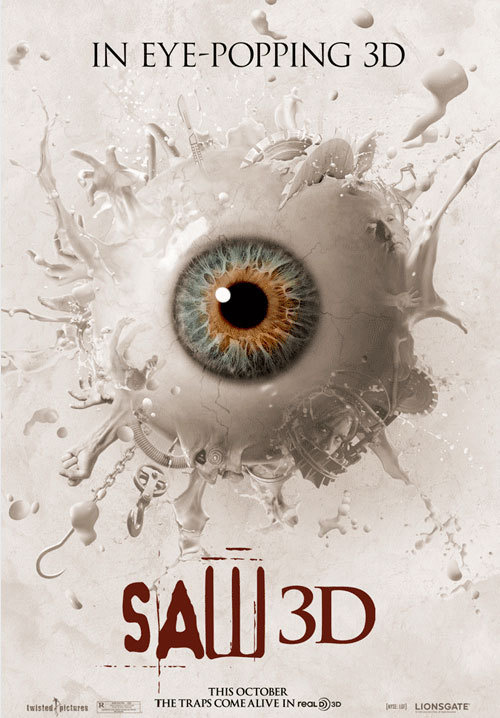 What began seven years ago as a twisty, brutal look at how far a man would go to save his life has degenerated into little more than a series of over-the-top vignettes that depict all the most gruesome ways to murder someone with a series of rigged machinery.

Deranged cop and inexplicable Jigsaw protégé Mark Hoffman (Costas Mandylor) has escaped from the beartrap that the Jigsaw’s wife Jill (Betsy Russell) has strapped to his face. While she heads straight to internal affairs detective Matt Gibson (Chad Donella), Hoffman tortures some twentysomethings for no particular reason and plays his mentor’s sadistic game with a group of skinheads for exactly one minute. But he has a more ambitious plan for Bobby Dagen (Sean Patrick Flanery), a fake Jigsaw survivor who has parlayed his fabricated tale of mid-air suspension on pectoral hooks into fortune and fame as a self-help guru. He runs support groups where Jigsaw victims can get together and remind the audience how brutal the first six movies were.

Of course, the Jigsaw disciple (or disciples, as it’s really hard to buy Hoffman as the deliberate, ideological type) must avenge the exploitation of his deceased mentor’s message, so he plans an elaborate game for Bobby, leaving the second half of the film to run like an agonizing obstacle course during which he must attempt to save his accomplices from painful deaths. Those violent, hate-mongering skinheads are killed almost instantly, but Bobby perpetrated a ruse over Oprah’s Book Club. That fucker’s gotta pay.

The original theme of Saw has been lost in a consommé of blood, severed limbs and the damage a bear-trap can do. No longer does whoever is assuming the Jigsaw mission to “help” his victims reclaim their lives via mental and physical torture. Now he’s just any other sadist who murders remotely with the use to animatronics, pre-recorded videos and abandoned buildings rigged to maim. 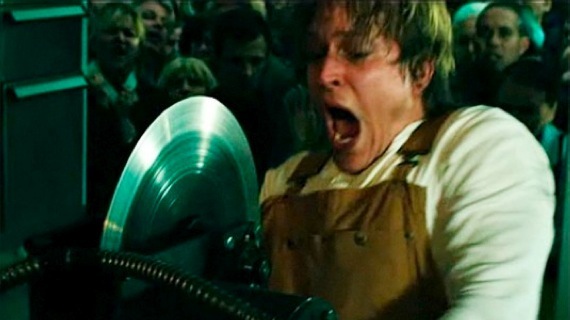 Well, it didn’t really make all that much sense at the onset, but in the realm of the modern mainstream horror flick, we were willing to buy it. Alright, this Jigaw guy’s angry because he’s terminally ill so he takes it out on his oncologist. In the current film, the third in a seemingly endless line of fanatical disciples is killing skinheads. Now he’s a damn public service announcement. Sure, everyone loves a good Nazi slaughter, but it just feels like pandering, a desperate final attempt to inject something decent, though it is unclear what, into an increasingly abhorrent character. Jigsaw, or whoever it is these days operating with the M.O., is still the self-righteous douche he is in any incarnation. He makes Dee Snider’s fellow ideological torture guru Captain Howdy of Strangeland seem like a chill dude.

Originally two men were locked in a room with the tough decision to cut off their own feet or die. Now the torture takes place in a booby-trapped abandoned asylum. There is no more psychological terror, no more of the audience weighing what they would do in under such duress, but merely brief feats of strength against machines with a lot of spikes. There is no character development, as even all we’ve been shown of the protagonist is a lie, just death. In an attempt to gross out the blind, the gruesome and overly graphic death scenes are accompanied by the sound of flesh ripping from a back and a fishhook being pulled from a screaming publicist’s gut. It’s more excruciating than listening to strippers talk politics.

Yes, the whole film is about as comfortable as listening to nails on the chalkboard, and it appears that director Kevin Greutert (of Saw VI fame. Woo hoo!) had purposely forsaken actual fear for multiple shots of modernized efforts to draw and quarter. And writers, fellow Saw alumni Patrick Melton and Marcus Dunstan, must learn that you cannot build suspense in sixty-second intervals. If we’re not adequately invested in the character, we just won’t care. Suspense is forged in tension, emotion, the element of surprise (i.e., any Hitchcock film or episode of Dexter). How can there be suspense when not only do we know that each of these fleeting characters will die, but Jigsaw tells us how and exactly when? These matters should be addressed and amended rather than just being covered with yet another beartrap head explosion. Not to mention that the franchise jumped the shark when it got a cop involved in Jigsaw’s macabre games.

The film is just straight torture and any would-be twists are way too predictable by now, with the sole redeeming quality being acting (Flanery and the long absent Cary Elwes) that is above average for a seventh installment in a horror franchise.

The ending of this supposed final chapter leaves it open for more of this blood-drenched smut. But hopefully the new round of cops (cause Jigsaw’s more deadly to that occupation than an explosion at a donut shop) will catch him before the movie-going populous is subjected to yet another installment. The deranged killer should be easy to track down. Look into schools that offer formal training in animatronics. Keep an eye out for the guy hauling massive amounts of machinery to the abandoned warehouse. Jot down the license plate of the truck carrying an inordinate amount of metal spikes. Flag the purchase of chains they do lamp parts for lowly aspiring bong makers. And who needs that many damn beartraps in the city?

But, of course, the concept of a final chapter for a franchise that will probably retire as often as Cher is probably a bigger ruse than that perpetrated by Bobby Dagan. The only logical way to go about the inevitable next installment would be reality television challenges. Put an exploding beartrap on Kate Gosselin and see how much she cares about her eight kids then.