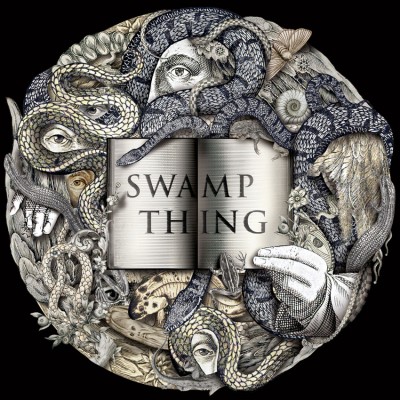 6131 Records has just released a new self-titled 7″ E.P. by Richmond metallic-hardcore quintet Swamp Thing. This 4-song effort follows the band’s highly praised 6131 Records full length, In Shame and serves as a tasty appetizer for what is yet to come. When this E.P. first landed on my desk, my initial thoughts were, “I hope the music is half as rad as the E.P. artwork.” Die-hard fans will find the cover artwork complimented by a deep red, marble-splattered vinyl, nothing short of awesome.

The opening notes of “I Never Knew” put any thoughts of trepidation to rest as the E.P. powers forward with energized, high-end, irate screaming in the same vein as bands Trash Talk, Mother of Mercy, and Ceremony. The music is rooted in a more straightforward hardcore attack than the aforementioned comparisons with tonally rich, meaty guitar licks that even bring to mind early Comeback Kid with use of driving rock and hardcore riffin’ melded with harmonics and high-octane production. The guitar and bass work is complimented by solid drumming that keeps a thick bottom without the use of blast beats and d-beat rooted poly-rhythmic attacks that many are currently incorporating. This four-song effort is very focused but also draws on many subtle influences without becoming flamboyant or over-the-top. You’ll hear some Southern-drawl creep into tracks “Clout” and “Out of Character” with varying rock elements and even some guitar solo-work thrown into the mix.

Closing track “I Know You” draws on the intensity of the opener and the band leaves you swinging just as hard as they opened this poignant 4-songer. Swamp Thing‘s latest self-titled E.P. has defiantly taken a page from the “leave them wanting more” philosophy, as this seven-minute offering will leave you just enough to wet your pallet and then head back to the buffet looking for more.