The Tapes Your Mother Laid Out for You
Vol. 6
Hear it First: Paul Von Aphid
A.W. Miller 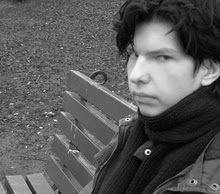 This time, the project is “primitive garage punk blues” with rough vocals. So far, two tracks from the upcoming EP have been released. Influences include The Gun Club, The Birthday Party, The Camps, Pussy Galore, Oblivians and more.

Your Ribs
I Want You So Bad

Since Paul Von Aphid’s background lies in the industrial realm, even though the songs are guitar-driven, the instrument is used in a very primitive way to create very basic rhythms that are distorted and accompanied by vocals, and programming. The vocals match up with the riffs the same way Ozzy Osbourne’s did in early Black Sabbath which is, again, primitive, but an enjoyable and undeniably catchy element found in good simplistic music.

The lyrical content is, perhaps ironically, love oriented. However, it manifests itself in bizarre ways. For example, the song “Your Ribs” is about Aphid’s girlfriends ribs. Strange, sure. Give it a listen.