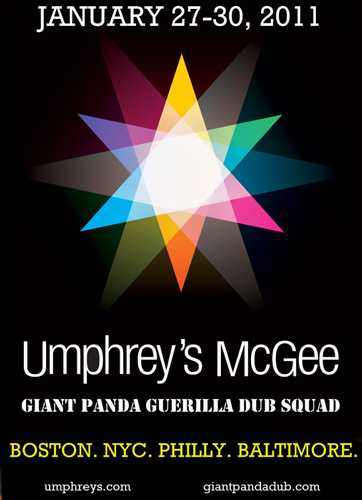 Umphrey’s McGee, progressive rock jam band out of Chicago, rocked the scene Saturday night at the Electric Factory in Philadelphia. A sold out crowd filled the venue as doors opened at 8:30pm for openers “Giant Panda Guerilla Dub Squad“. Giant Panda played a confident set and set the mood just right for the rest of the evening.

As Umphrey’s McGee took the stage, the crowd couldn’t have been louder or more grateful. Not only is Umphrey’s McGee one of the top touring jam bands in the nation, but this was the first show at the Factory since Lotus’ New Years Day concert extension. It was a bit disappointing to learn that the band was not currently touring with a laser rig, but the light show provided certainly did not fail in plastering giant smiles on faces everywhere. Many seasoned Umphrey’s McGee fans commented after the show, “This was one of the best sets we’ve ever seen them play.”

– Photography and Article by Timothy Bonner