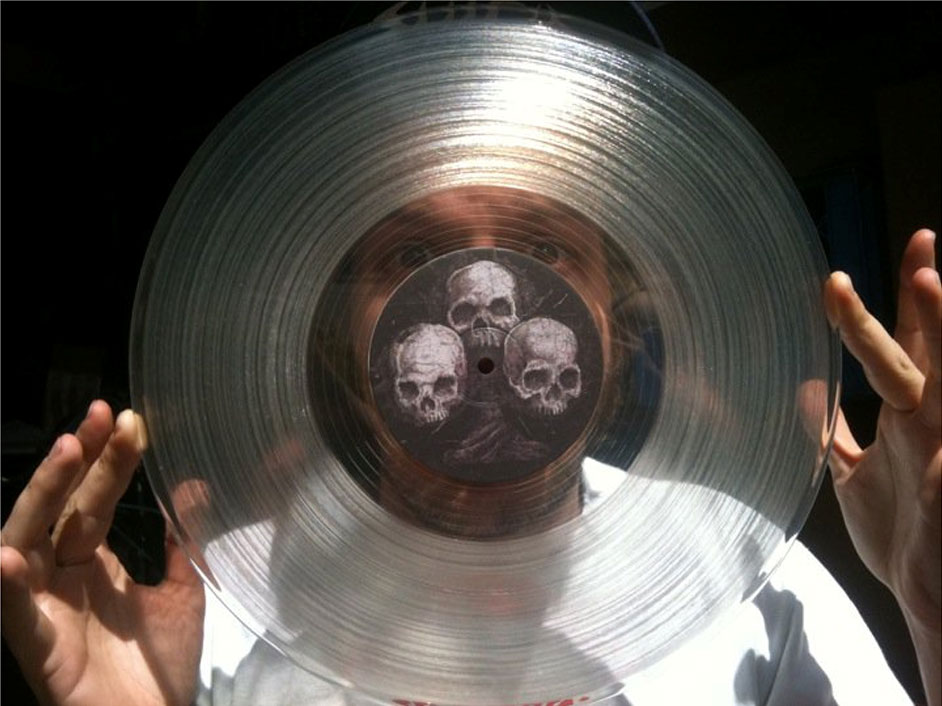 Tankcrimes kicks ass. For this music connoisseur, it simply doesn’t get much better. DIY-to-the-core, this West Coast phenomena appeases the unholy gods of shred and keeps the American punk rock dream alive like only a rare few can. Many a record needle has been worn down thanks to the hands on effort of label-head Scotty Heath who brought legendary releases to your front door from the likes of Annihilation Time, Vitamin X, Voetsek, Toxic Holocaust, Victims, and even Cannabis Corpse, to name a few. The now infamous DIE HARD editions of select LPs from Tankcrimes include hand-screen printed poly bags, gatefold jackets, and inserts. A vinyl collector’s wet dream. April is looking like one of the all-time best for Tankcrimes, so we had to get in a quick word in with Tankcrimes’ main man, Scotty Heath, for the inside scoop on what’s about to drop. Get stoked! 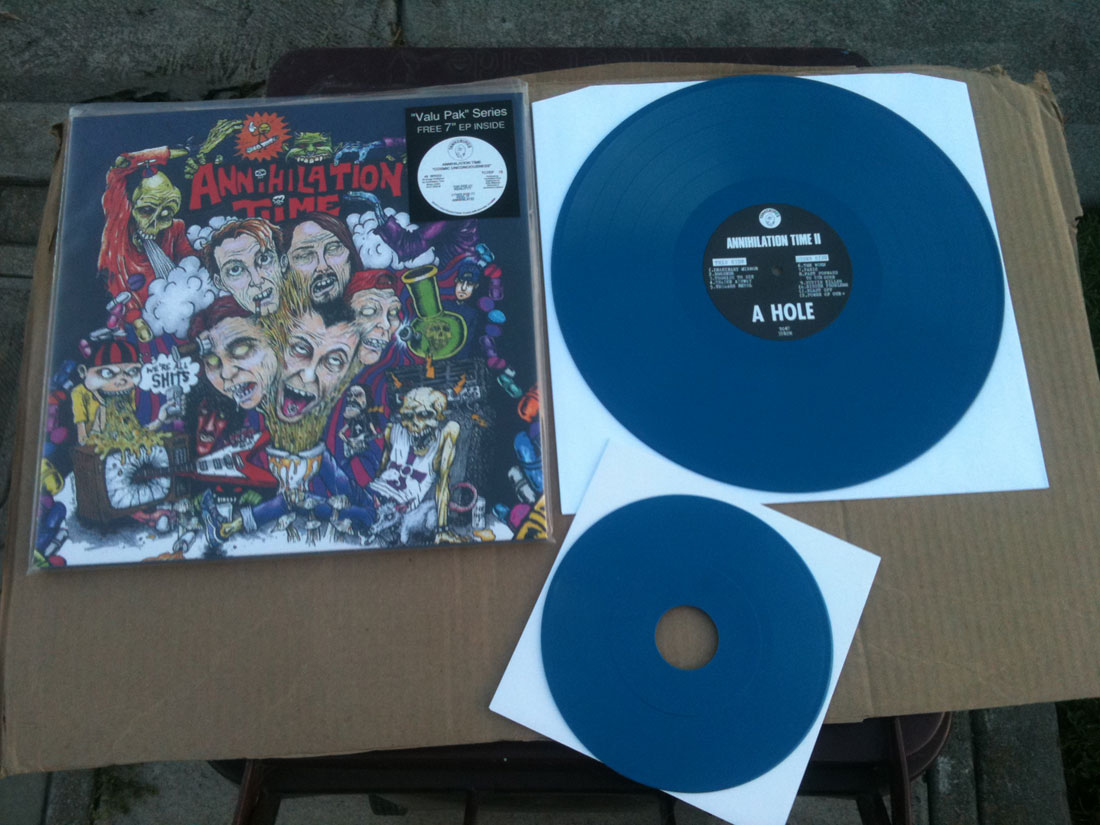 Joshua BTS: What releases are set to drop this month at Tankcrimes and how stoked are you on each?

Scotty Heath: ANNIHILATION TIME “II” LP – “Valu Pak” – this is a reissue and I’m so stoked to have this record on Tankcrimes, it is my hands down favorite album of the ’00’s and after being on 3 different labels it has found it’s home on Tankcrimes – I will keep this in print forever BUT if you act now and pick up one of the first 500 copies, it comes as a “Valu Pak” w/ a free copy of the “Cosmic Unconsciousness” 7″, both on blue vinyl. (The “Valu Pak” being a tribute to MYSTIC RECORDS (AT is from Ventura/Santa Barbara/Oxnard) not the labels business practices, but its legendary output)

A.N.S. / RAMMING SPEED split 12″ – 2 killer bands that work hard and play fast! The first of an unofficial “Brainsqueeze split series” I did 100 copies on colored vinyl with a screen print and they sold out over night last thursday. 3 of ANS’s 4 songs are about skateboarding!

KICKER “Innit” 7″ – debut ep from new Oakland old punk super crew. Fronted by England’s Pete the Roadie, who’s been a punk since it’s inception, worked for many legendary bands (Subhumans, Amebix, Jello Biafra) now in his own band (a first). Backed by Dave Ed of Neurosis, Mauz of Dystopia (who is also my boss at my “real job”) and Toby of Filth. They have 2 other singles coming on Life is Abuse and Inimical Records and are in the studio today actually working on their Tankcrimes LP coming this fall.

KICKING SPIT “Psychrockbullshit” 12″/cd – This one is a first for TC, Kicking Spit is a Noise Rock / College Rock / “Alternative” band. The Dinosaur Jr. influences are right up front – this shit is awesome! Different from other TC stuff but still much faster and more aggressive than most bands playing this style. Guitarist / Singer Mark Bronzino shreds guitar for ANS as well so you know there is a shit ton of solo action and lots of focus on the riffs. It reminds me of high school in the early 90’s.

VICTIMS “A Dissident” LP – I finally have release a “Record of the Year”!! I have ben friends with Victims since booking them an Oakland show in 2006. We got much closer last year when I was working with Municipal Waste and we took Victims out on a Euro/UK run. I told them then if they ever wanted to work with TC, the doors were wide open – to my delight they took me up on it a year later! This is Swedish D-beat perfection and they really got adventurous in the song writing, the album is pretty diverse once you soak it in. Working in a partnership with Deathwish (who handled the cd/digital on this release) is cool especially as Tankcrimes grows to get support from some of the big guys. Also beautiful artwork from Richie Becket inside and out on this gatefold jacket. I did a “DIE HARD” edition of 150 copies w/ colored vinyl and a screen print and they sold out over night last week. 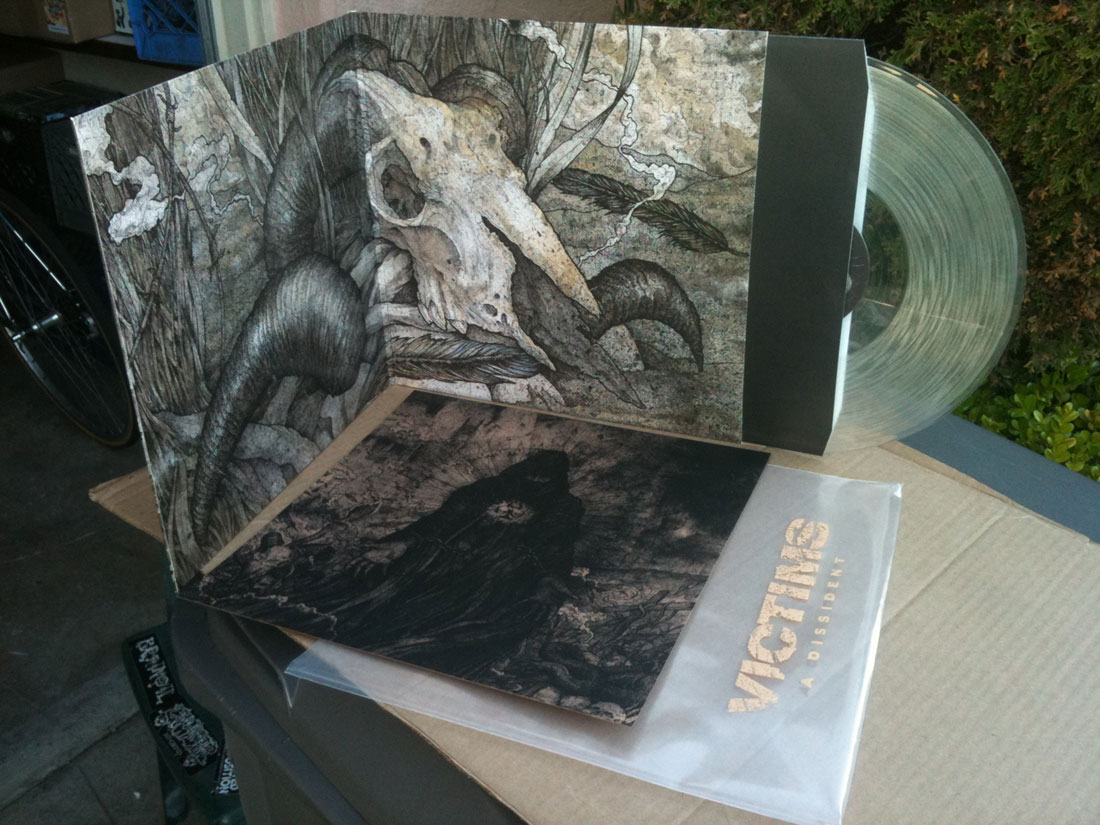 Joshua BTS: What aspect of the release process is consuming the majority of your time as we count to the release dates?

Scotty Heath: Sometimes “DIY” really gets ridiculous, I have been folding and stuffing inserts and jackets for about 4 weeks now. My garage is full with boxes of LP’s. I screen print all the “DIE HARD” editions myself. Now that everything is ready and I have offered the records for sale on my website a week early, I processed over 300 orders last weekend, it will take until another 4 days to pack and ship them all.

Joshua BTS: It’s been rumored that more Brainsqueeze-esq fests are in the works. Can you confirm this speculation?

Scotty Heath: Yes, I am working on BRAINSQUEEZE 2 now, it will be in Oakland again this fall. That’s all I’ve got to share right now. Brainsqueeze is a label showcase so it won’t be too much of a surprise who is playing if you’re familiar with the TC roster, but I’m trying to put some bands back together for this years shows.

Joshua BTS: After this month of rad releases, what should fans expect from Tankcrimes as we head into the summer months?

Scotty Heath: It does not slow down at all. I’m already getting test masters and artwork for this summers jams. CANNABIS CORPSE “tba” LP/CD, third album, mixed by Eric Rutan, art by Andrei Bouzikov. VITAMIN X “About to Crack” 12″, recorded by Steve Albini with art by John Baizley. Both of these are huge and the fans are eager to hear. I’ll also be working with a Danish hardcore band called NIGHT FEVER – awesome HC punk that fans of TC are gonna flip over.

Joshua BTS: For those unaware, apart from running the mighty Tankcrimes label, you also slay the drums for the thrashtastic Bay Area band, VOETSEK. What’s cooking with the band?

Scotty Heath: VOETSEK is currently writing a new album, our 3rd. We have always released our stuff internally (either through TC or bass player Athena’s SIX WEEKS RECORDS) and this time we’re gonna reach out to some other labels. I’m excited to be “just drums” and let someone else worry about the boring stuff.

Joshua BTS: Final thoughts? Random recipes? Rants or raves before we say ‘Til’ next time’?

Scotty Heath: Here is a recipe for record mail order customers: Email annoying questions about where your order is 24 hours after placing it and get a free fist full of glitter in your package!

Don’t forget to go listen to the entire Tankcrimes catalog at the website and free download of the KICKING SPIT EP – http://downloads.tankcrimes.com/album/psychrockbullshit

and don’t be scared of the fecal fornicators, SHITTY FUCKER, yes it’s cussy and poopy but if you love Dystopia or Eyehategod or any sludgy, grindy punkness – go download “Diarrheality” now…
http://downloads.tankcrimes.com/album/diarrheality

Thanks Josh! Until next time, Cheers!