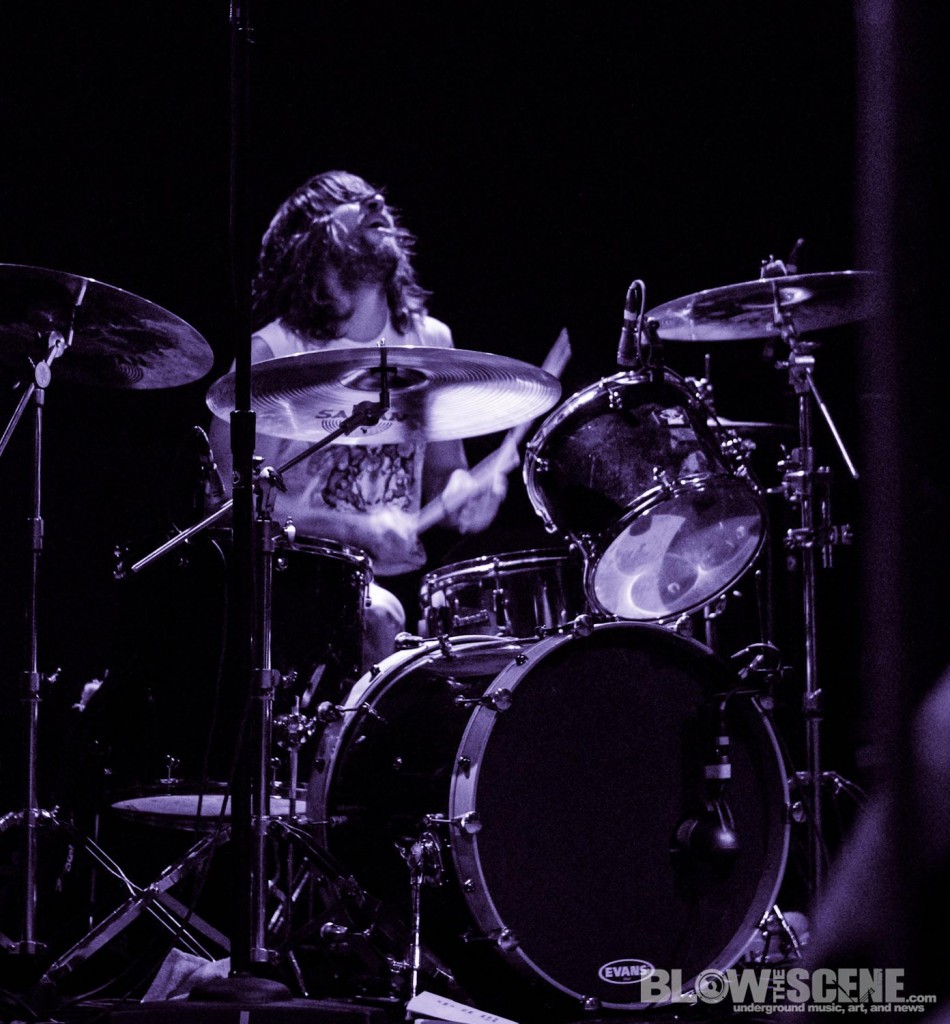 We are very pleased to offer Blow The Scene readers around the world an exclusive interview with the renowned and genre-defying drummer of Converge, Ben Koller. This interview comes as Converge’s latest album, All We Love We Leave Behind, hits streets today via Deathwish Inc and Epitaph Records. Ben takes time to discuss the making and drum recording sessions behind the new record with bandmate and studio head, Kurt Ballou of GodCity Studios. Ben brings us up to speed on his gear, his current playlists, upcoming plans with his other band All Pigs Must Die, a new side project, warm up routines, poker, and more!

Joshua BTS: Greetings! Thank you for taking a few minutes with Blow The Scene readers around the world. Let’s begin this interview by having you introduce yourself and your musical weapon of choice with influential punk metallers, Converge.

Ben Koller: Hi there. I am Ben Koller from Converge. I play the drums and sometimes gong and vibraslap. 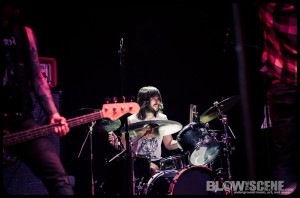 Joshua BTS: Your latest studio work with Converge, All We Love We Leave Behind will be released to the public on Oct 9th, 2012. I understand Converge guitarist and GodCity Studios head, Kurt Ballou crafts the original frameworks for the songs. At which point in the writing process do you step in and start applying drum parts? With you now being located in Brooklyn and Kurt in Salem, are you firing ideas and recordings back and forth via email?

Ben Koller: Our songs come about through all sorts of different methods. Some songs we write in 20 minutes and some take 2 years. Kurt is the main riff architect but our writing process is very collaborative and we all play a big part in the final product. If any one of us wasn’t present during the writing and arranging process it wouldn’t sound like Converge.

Joshua BTS: Your drumming has had a profound impact in emergence of punk/metal/d-beat hybrid musicianship. It?s so new, that there really isn’t a term for it yet. Yes it polyrhythmic, it incorporates d-beat and many d-beat variations, razor sharp fills, occasional blasts, and double-bass. But the overall output cannot be described as simply metal, punk, or any traditional genre. When formulating your breakthrough album Jane Doe and beyond- Were you consciously trying to develop a new style of extreme drumming? And how would you describe your approach?

Ben Koller: I’m not consciously trying to play a certain style, I’m mostly trying to play something interesting that makes the song better. When writing new songs I usually end up writing stuff that’s too hard for me to play. I don’t ever want to just play something stock and be ok with it. I want to keep pushing myself and I always want to get better. Hatebreed lyrics also inspire me quite a bit. Perseverance. 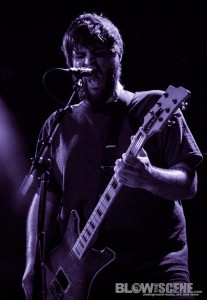 Joshua BTS: Each Converge album, while maintaining some familiar elements, takes on a new feel and mood. Some of the recordings sound more stripped down and thinner, while others sound more polished or fat and allow different frequencies and layers to surface in the recordings. How much time do you spend with Kurt cultivating the overall sound of the drums for a given release? What does this process look like? And did you try anything new or step out of your comfort zone when cultivating the sounds and musicianship behind All We Love We Leave Behind?

Ben Koller: Kurt is always pushing me in the studio to do my best which I hate at the time but in the end I really appreciate. These recordings are permanent and you don’t want to find yourself listening back and knowing that you could have changed something you weren’t 100% on. We are always trying new methods whether it has to do with tuning, instrumentation, microphones, mixing, etc. There’s always lots of trial and error, which has a really positive impact on the drum sounds and the evolution of Kurt‘s recordings.

There probably would have been a lot more double bass on older converge records but I really wasn’t that good at first. I’ve had 12 years of practice with it at this point and APMD has helped me along for sure. 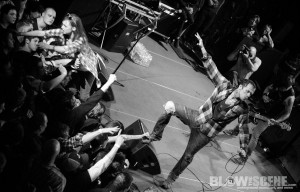 Joshua BTS: Having just seen Converge in Philly in April, I have noticed the band is playing long sets, upwards of 90 minutes, if not longer. What type of physical conditioning are doing to keep up such an high level performance? I know some other top-tier musicians like our friend Liam Wilson of Dillinger Escape Plan swear by Bikram Yoga. You a Yoga man? Any special diet?

Ben Koller: I’m a bit of a psycho with that sort of thing. These are the things I think about pre-show: Get enough sleep, don’t drink any alcohol before the show, eat a good healthy meal 3 or 4 hours before your set, stretch/yoga for 10-15 minutes, warm up on a practice pad and then a quick blast of some sort of cardio right before set time. I also try to wear shorts and a shirt that will give me full range of movement. I like to exercise every day to keep up my endurance. I usually do any combination of yoga, jogging, kettlebells and drumming. It’s a great stress reliever!

Joshua BTS: Being a drummer and a gear nerd myself- I always like to throw a few in for the gear heads. What does your current rig look like? Any new pieces for the All We Love We Leave Behind recording sessions or upcoming tours? Please give a rundown of your gear from cymbals to pedals. I know you were bummed when Zildjian stopped making the Z Series..Any new cymbal finds?

Ben Koller: Oh man gear…For Converge records we usually have 2 different kits set up; one for the faster songs and one for the slower songs. On this record I used one of Kurt‘s snare drums that he made himself. It was aluminum I think? I can’t remember it’s all a blur. It’s a combination of Trick, Tempus, and Yamaha drums usually. For my live kit right now I have a Trick kick and toms (22, 12, 16) with a Dunnett stainless steel snare. Cymbals are Sabian Xplosion crashes, paragon ride, and a mish mash of bottom hi-hats with whatever I have lying around. I think right now its a paragon bottom with a rock bottom for the top. I miss the Z mega bell ride a lot. I’m still trying to get my hands on one of the old ones. 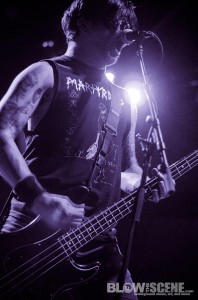 Joshua BTS: What do your practice regimens look like? Do you have a practice space in Brooklyn that allows you to keep up the chops at will? And do practice and record to a metronome?

Ben Koller: I don’t usually practice with a metronome. I try to play solo as much as possible when I have time as well as with my other bands and random jam sessions with friends.

Joshua BTS: When you are not busy writing, playing, and recording with Converge, All Pigs Must Die, and United Nations– What does an average day in the life of Ben Koller look like?

Ben Koller: These days most of my free time I spend with my wife, daughter, dog, friends and family.

Joshua BTS: Apart from drumming- What are some of your other passions? Whether they be artistic or otherwise? What other creative outputs do you engage in that we may not suspect?

Joshua BTS: What drummers do you currently look to for inspiration or just entertainment?

Ben Koller: Some of my favorites these days are my bros Chris Maggio, Jay Weinberg, Dave Witte, Brann Dailor… There have also been some great videos on YouTube lately. That ZZ Top cover band guy is amazing.

Joshua BTS: Do you pay any attention to politics or current activists and political movements? If so, what has your attention and/or support right now?

Ben Koller: That’s a pretty deep rabbit hole to jump into! The world is fucked and it’s very entertaining. 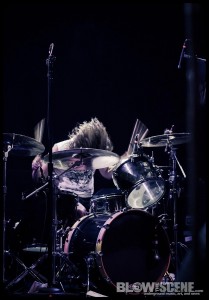 Joshua BTS: What does your current ipod or mixtape playlist look like? What do the flies on the wall hear coming from your speakers? Any bands really exciting you right now?

Ben Koller: Off the top of my head, lately i’ve been digging the latest shit from Terrible Feelings, First Aid Kit, Mumford and Sons, Baroness, High on Fire, and Gillian Welch.

Joshua BTS: Any stops on your upcoming European Tour run with Converge you are looking forward to in particular?

Ben Koller: London, Paris, Scandinavia, and Croatia are fun. We’re also going to Rome for the first time. I’m pretty excited about that.

Joshua BTS: How are your musical-related endeavors panning out into 2013? What?s cooking?

Ben Koller: 2013 should be great! Some touring with Converge, recording a new APMD record in January, releasing a 7 song ep with my new 2-piece band (we don’t have a name yet) with Steve Brodsky from Cave In, and whatever other crazy stuff that I might get into!

Joshua BTS: We really appreciate you taking this time with Blow The Scene and our readers around the world! Any final thoughts?

Pick up a copy of All We Love Leave Behind at:

Epitaph is currently offering a full stream of All We Love We Leave Behind: