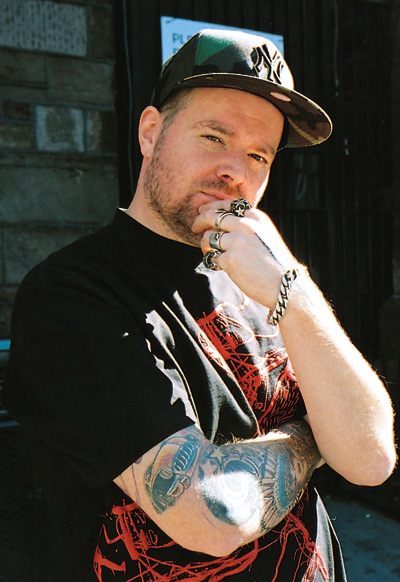 Dave White has been creating award winning art since the early 1990’s. Born February 19th, 1971 in Liverpool, UK, Dave developed his technique and graduated from John Moores University with a BA in Fine Arts Painting in 1994. Today, Dave White‘s art has held residencies across the globe. He has been recognized by AOL, Nike, Wall Street Journal, and dozens more publications internationally.

TJ: Hello Dave White! Please give our readers from around the world the skinny on who you are and what it is you do!?

Dave White: Hi all, my name is Dave White I am an artist from Liverpool, UK.

TJ: Where did you study fine art Dave?

TJ: What was it like studying in John Lennon’s old studio?

Dave White: It was an amazing space, in the top floor of the life drawing room, with a glass roof and amazing light. I was only told on my last day by one of the janitors who knew John Lennon when he was there.

TJ: What is it about oil that attracts you so strongly as a medium?

Dave White: For me oil paint is very tactile and spontaneous, and I just connected straight away when I first used it over 20 years ago. The texture and surface is totally unique and gives such an awesome appearance. It seems to reflect my ideas and personality when I use it.

TJ: What spawned your use of drips and splats as your unique signature?

Dave White: The signature appearance of my work is not forced or deliberate it’s just how I visualize my ideas. If you look back over the past 20 years the evolution of this goes right back to my days studying painting. I guess what is apparent is the speed and dynamism of how I make them which comes through. The drips and splats just occurred as soon as I connected with the medium.

TJ: When did you decide to move from subject matters including animals and planes, to Nike sneakers? Why?

Dave White: I have always collected and loved sneakers since being a kid, I was obsessed by them, the colours the designs just grabbed me way back then. I was sitting in the studio and had taken off my kicks to change into my painting clothes, and I just started really looking at the side on profile of the air max 95. The way the shoe flowed, the panels that met with the lace loops, the touches of 3m and gradients of grey. It just blew my mind, and I just wanted to immortalize it. And so began the sneaker series.

TJ: Which of your sneaker pieces is your personal favorite? Why?

Dave White: The best one is the Jordan IV mars red, I knew as soon as I finished it that it was the one, it happened almost by itself and just flowed into existence.

TJ: Tell us a little about meeting the man behind the Nike Air movement himself, Tinker Hatfield.

Dave White: He is an amazing spirit, and incredible talent, like millions of others I feel his work is up with the greatest designs of the 20th century. It was a total honor to meet him, I got to ask him some questions that had burned me for ages about key shoes such as the AJV, and his passion and love for design is only matched by the wonderful functional art he and the team at Nike makes.

TJ: What is the Sneaker Pimps Tour? Is your artwork still on display with it today?

Dave White: Sneaker Pimps is a global tour which brings a massive collection of sneakers, including crazy make ups, customs, unseen samples, artwork, skating, street art and music all together to celebrate everything Sneaker Culture has to offer. I had some amazing times when I was part of the tour and doing the live sneaker paintings we got to see some incredible sites around the globe, with some amazing people such as Futura, Stash, Methamphibian, SBTG, along with some incredible acts such as Public Enemy, Jeru the Damaja, and The Beatnuts. The tour is back and is still going strong.

There is one of my pieces in the tour the painting is owned by Peter Fahey who runs the whole show, it’s of Futura’s FLOM dunk.

Dave White: I love the 90s-2002 era of hip hop, I follow a ton of bands too, quite diverse in my taste, currently really enjoying the dj sets of Netsky and Danny Byrd who are awesome drum and bass dj’s.

TJ: Any chance we might see you do some album art for them in the future?

Dave White: Who knows music is a massive part of my life and my 2nd love after painting. I did do an EPMD cover at an amazing event in Amsterdam a few years back, De Hop gets in incredible rap acts and they write, produce and record a track in a night with a live crowd, it’s an amazing concept. Those guys were totally amazing and the honor of being a part of that is something I will never forget. Check it on Youtube.


TJ: Something some of your art fans may not know, is you made a one hell of a run in the scratch DJ game. What is the story behind “Surreal Madrid”?

Dave White: I saw an ad in my local vinyl spot in 1997 looking for a scratch dj, I used to practice for at least six hours a day, crabbing, flaring, beat juggling, I was deep into that scene. I went and auditioned, and the next day was on a plane with the band. Surreal Madrid was a live breakbeat band. And in the three years we were together we had a great time. Some big hit singles, and tunes in videogames, sell out massive concerts, it was all a bit mad. I was very grateful for the opportunity.

TJ: What was it like performing with Fatboy Slim and the Basement Jaxx at the Benicassim Festival in front of thousands of people?

Dave White: Absolutely insane, the feeling that gives you is very unique and quite unlike anything else, I can totally understand why the likes of the Rolling Stones continue to tour!

TJ: Do you use music as a creative tool while you paint? Who are some of your more influential musical artists?

TJ: I liked the use of “KRS-One – Outta Here” in the video of your custom Kid Robot, “Sgt. Robot”. Were you a previous fan of Kid Robot before creating your own custom renditions?

Dave White: Of course, I love vinyl toys, and have been a massive fan of KR since they started. I love their philosophy as a brand and identity, the Munny and Dunny are fantastic, not only for the releases by people from all walks of life, be it design, art, graf whatever, but the custom scene is incredible where a real cult following has happened, it really encourages creativity and anyone can do it. I love that and the ingenuity is fantastic that people come up with.

TJ: What served as your inspiration to create the “Top Mun” and “Sgt. Robot” Kid Robot models?

Dave White: I am obsessed and always have been with all things military, as a child making models I never was interested in making tanks or planes look perfect. I was all about the mud and grime, scuffs and rust, paint chips and bullet holes. That’s what these objects look like in reality. I have never lost that fascination and it has always been a part of my work. Top Mun was based on a weathered polished aluminium 60’s jet, and Sgt robot, I wanted him to look war torn and rough.

TJ: All of your pieces from the War Comic series and Superheroes to the Sand Trooper portrait and Burlesque works are completely awesome, but your new project, “Forgotten Alchemy”, is amazing! What made you drop the color so drastically?

Dave White: The Forgotten Alchemy collection is all about something changing and started with toy cars that were 40 years old and had been played with and handed down from generation to generation. I loved the unique appearance the bare metal, the wonky wheels the paint chips and numbers that had rubbed off. These things had so much character but so much presence, been loved and neglected and left. It started to develop and become a metaphor for life really, you grow up and leave a lot of things behind.

So the muted white and black versions were perfectly powder coated making them look new, pristine and beautiful again, but underneath is the history and human contact.

TJ: Did you stack real model cars before creating your car tower sculptures? How long did it take to find a form and balance that worked?

Dave White: The towers became another direction enhancing the meaning really, the fragility, looking like they could topple at any moment, the construction referenced this as like a child I made them as high as I could before they would collapse and smash. This collection was something that formed organically and I will be pursuing and developing in the future.

TJ: You have stated in previous interviews that you love depicting weapons for their form, rather than their purpose. Are your gun works purely an adventure through your own perspective, or are you trying to make a public statement with them?

Dave White: That’s for the viewer to decide, the collection is based on a series of iconic guns which all have meaning, making them look beautiful, animated and delicate which detracts from their purpose. The Derringer and Peacemaker are the kind of weapons that people hang on their wall to show status, 300 years ago they would be used for no other reason but to attack and defend. It’s only time that changes them and makes them abstract and useless. I love that they have become an art from rather than a weapon.

TJ: Any ideas on where your art may be going next?

Dave White: I do and I am working them at the moment, I am extremely excited by these and feel they are by far at this early stage the best work I have ever made. I am actually doing a mural at AOL HQ in NYC based on these so if you keep your eyes peeled you may see a preview. All I can say is they are all about movement and dynamism. The first show is in London in April 2011.

TJ: Where can our readers find out more information about you and your works?

Dave White: You can have a little look at the site, which has an in depth video interview, and of course a few Googles here and there and the usual blogs such as freshness, hypebeast, and slamxhype all have documented my work for the past 8 years do a little search on them.

Dave White: Love what you do, be yourself, go with your heart and seize every opportunity, be patient, and avoid negativity in any form, in the end you will get there!