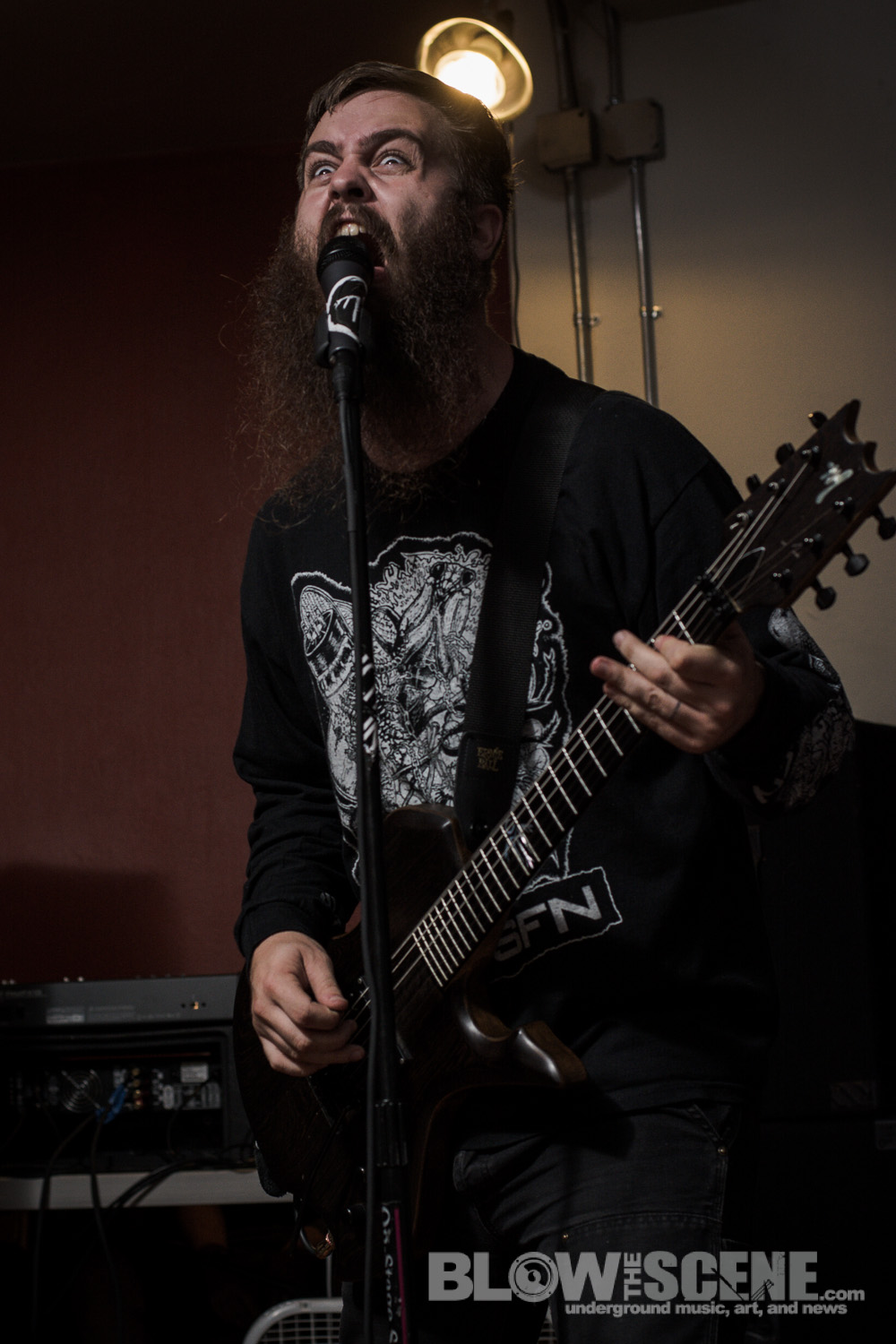 We are pleased to offer Blow The Scene readers from around the World an exclusive interview with guitarist/vocalist Blake Connally of scorching Atlanta 3-piece, Dead The In Dirt. This vegan straightedge band’s debut LP on Southern Lord Recordings, The Blind Hole has brought down tidal waves of sonic annihilation on fans that will see the album rest comfortably with best best extreme efforts of 2013.

In this new interview, Blake is kind enough to bring us up-to-speed to on the writing and recording process behind the new record, vegan hotspots on tour, staying socially active, new musical toys from the recording sessions, and so much more.

Joshua BTS: Greetings! Thank you for taking a few minutes with Blow The Scene readers from around the world. Let’s jump into this interview by having you introduce yourselves and your musical palates of choice with Atlanta’s vicious vegan/straightedge, 3-piece grind unit, Dead In The Dirt.

Blake DITD: Blake, here. I guess my musical palate is all over the place. Anything from Grindcore to 80’s NewWave to 40’s Country.

Joshua BTS: Let’s dive right in on this aural assault of a debut LP, The Blind Hole. Unquestionably one of the heaviest records of the year with strong sense of immediacy. DITD has been together for several years prior to this release- When did the writing sessions for this debut LP first start taking shape?

Blake DITD: We started writing for this record a few weeks after the release of FEAR, but due to our hectic touring schedule the writing process was prolonged quite a bit. We also didn’t want rush the LP; we took months ironing out everything and it payed off when we hit the studio.

Joshua BTS: You decided to travel to Bricktop Recording Studio in Chicago with Andy Nelson (Weekend Nachos). Given the final product, it?s easy to see why you chose to record with Nelson. How did you initially link up with Andy and why the choice to do the LP there?

Blake DITD: We met Andy a few years ago when we played with Weekend Nachos in Atlanta, it was kind of love at first sight, haha. We kept with the WN dudes and ended up doing a few tours with them in early 2012. Through touring together Andy was able to understand our sound and live performance, which ended up giving him a real edge on capturing our sound in the studio. We were also drawn to recording away from home to be able to fully immerse ourselves in the process. Andy is an incredible music engineer and a awesome human, I couldn’t have asked for a better person to work with on this.

Joshua BTS: One element of The Blind Hole that I found immediately compelling was the rawness and power behind the musicianship without a sacrifice of clarity. And being that you are 3-piece, the sonic presentation is all that more impressive. Did you guys bring your own gear into the studio to capture these vicious tones and the layers of distortion present throughout?

Blake DITD: Most of the gear used was our own, but Andy definitely had some cool toys for us to use. His mic placement and techniques were on point as well. I think the sound had to do with Andy’s previous knowledge of our live sound

Joshua BTS: What does the recording process look like with Nelson? Do you track live or separately? Do you implement a metronome? And how long were these studio sessions?

Blake DITD: We tracked this LP separately, we were more comfortable with that process, and I am total perfectionist when it comes to my playing. We don’t use a metronome, neither does Cannibal Corpse, well not for most of their albums haha. We usually went for like 6-8 hours a days, after that we were pretty spent. Joshua BTS: Was there anything specific about this recording process that saw abandon your comfort zone and experiment with new techniques or approaches?

Blake DITD: It’s pretty difficult for things to feel uncomfortable working with my best friends, including Andy. Although recording in Chicago was a new experience, it was pleasant, and perfect for the record. Andy had a bunch of tricks up his sleeve, that really added a lot of unique color to the tracks, he seemed to have new approach and good idea for every step of the recording.

Joshua BTS: Any new pieces of gear or new toys you worked into your rigs for these sessions?

Blake DITD: We were most excited to record with Hank’s new kit, a 70’s Ludgwig VistaLite set, as well as Bo‘s Kramer 450B Aluminum Neck Bass. Bo also picked up an 80’s Ampeg BlackLine SVT. I was also able to use some unique pedals and cabs that Andy had at the studio.

Joshua BTS: How do you approach the lyrical content for your works? Do you all contribute to lyrics? Being that you are an outspoken vegan/straightedge band- How does this perspective
manifest itself within the music?

Blake DITD: Myself and Bo, usually work on lyrics on our own time, after the majority of lyrics are written for a song, we sit down and go over the meaning and tweak one another’s work a bit. Most of the lyrics involved on the LP are extremely personal and emotionally driven, only a handful of are directly related to veganism or straightedge. Unlike most vegan straightedge bands, we tend to seldom write about those topics, as we feel there are many other topics we feel a need to scream about. That’s not to say we are trying to downplay our ethics, but more so connect with many types of people on grounds we all share, albeit extremely personal to us specifically. Joshua BTS: Apart from the music itself- Do you take part in or support any current forms of direct action related to the vegan/environmentalist movements?

Blake DITD: My wife and I create and sell shirts, stickers and other things, which all profits goto animal sanctuaries as well environmental activist groups (well the only one that isn’t bought out by the government). Bo works for a company that takes in and fosters dogs in need of a home.

Joshua BTS: Dead In The Dirt is about to embark on a tour with Homewrecker and Harm’s Way. Seems like a rad and rather eclectic billing. How did you come to link up with these particular bands?

Blake DITD: Our friend and part time tour manager recently became an affiliate of a North American booking agency. That tour had an open slot, and offered us a spot. Both bands are friends of friends. I hope we won’t stick out too bad on the roster, but ultimately it should be a good time.

Joshua BTS: As a touring vegan myself, I always have a few spots on the road I really look forward to grubbin’ down on hard. Any particular vegan food stops on this forthcoming trek that have you stoked?

Blake DITD: Green/Nami in Phoenix, Az is always a must. Doomies in Los Angeles, is a usual stop, can’t stay away from that Big Mac. Way too many to list in the Bay Area, but possibly Gracies Madre in San Fan. And last but not least City O City in Denver, maybe twice haha.

Joshua BTS: When you are not busy with band-related functions- How do you spend your time? Any other artistic endeavors or traditional job structures?

Blake DITD: I spend most of my days organizing the future of DITD, spending time with my wife and pitbull. Bo and Hank have day jobs, and we all have bedroom musical projects, that will hopefully come to life one day.

Joshua BTS: How did you come to link up with Southern Lord? And how has the relationship been thus far?

Blake DITD: We just received an email out of nowhere, and everything fell into place. I think we have great relationship, we both work hard on pushing the band. Joshua BTS: You once again called on the talents of Bo Orr for the visual album elements. How did you originally come to link up with Orr and does the band play an active role in the development of the album art?

Blake DITD: Bo and I have been friends for almost a decade, he joined the band in 2010, and from then on he has done every piece of art related to our band. Sometimes, Hank or I will have an idea for a shirt, but most of the time we just let Bo do his own thing. As for the album art, Bo and I had been bouncing lyrics back in forth for months, and the subject matter lead him directly to creating layout.

Joshua BTS: What is your take on the current art and music scene in Atlanta? Any hot spots or artists that really have your attention right now?

Blake DITD: Well, this is quite a loaded question. There are tons of problems with this city/scene. Atlanta is socially inadequate to the highest degree. No genre click mixing, everyone itching to cut down someone if they get a leg up in anyway. There is only one all ages venue, that is increasingly difficult to book. There are two bars, both with age and booking restrictions, which leaves little room for a new generation to get a leg up on keeping a scene thriving. There are a few bands with integrity and little to no ego. Rapturous Grief, Cheap Art, and Antpile are my favorite bands in Atlanta right now. I could go on and on.

Joshua BTS: What does DITD have in the scopes as we head into the latter part of 2013?

Blake DITD: This actually going to be the busiest part of our year. We have 4 tours lined up as of right now that will extend to the end of 2013. West Coast, Europe, South East Asia, 305 Fest in miami… BUSY BUSY BUSY.

Joshua BTS: Thank you kindly for taking a few moments with Blow The Scene readers from around the World as we look forward to keeping up with the band.. Any final thoughts before we sign off?

Blake DITD: Thank you, Josh and BlowTheScene for taking the time and asking thought provoking questions. Thank you to anyone who reads this. grind for life.

Dead In The Dirt on Facebook
Southern Lord Recordings