We are excited to offer Blow The Scene readers around the world an interview with DNF guitarist Chad Kawashima, as his powerviolence practitioning band of speed fiends continue to celebrate their first vinyl release, Hurt, which hit streets in March via High Anxiety and No Idea Records. With the first distant rumblings of the band coming in 2006, they would soon find their schedules allowed limited time and began a perpetual cycle of hiatuses with DNF members touring regularly with their other bands Touche Amore and Trash Talk. The band recently found time to complete a blistering new release, Hurt, which we reviewed last month as the band continues to create a buzz amongst powerviolence enthusiasts across the board. Chris was kind enough to go in depth with Blow The Scene, as he discusses DNF‘s origins and brings us all the way up to speed on the writing and recording processes behind the new EP before touching on the band’s plans for 2012.

Joshua BTS: Greetings! Thank you for taking time to answer a few questions for Blow The Scene readers around the World! Let’s begin by having you introduce yourself and declare your onstage weapon of choice with CA’s rising sons of powerviolence, DNF.

My name is Chad and I play guitar.

Joshua BTS: DNF features members of prominent bands Trash Talk and Touche Amore. How did you come to find one-another to form this current project? I understand you’ve been writing music together since 2007? Was DNF in the works prior to your engagement with the aforementioned bands?

Chad Kawashima – DNF: We started the band in late 2006 as 4 best friends with a desire to play fast music. We all grew up together and hung out every day so the band was just a natural extension of that. In summer of 2008 we all ended up moving away from Los Angeles and DNF went on hiatus while we all pursued other projects. Then in December of 2010, Sam, Elliot and I all found ourselves back in LA and started working on new material. The record materialized after many scattered practice sessions, centered around everyone’s busy schedules. 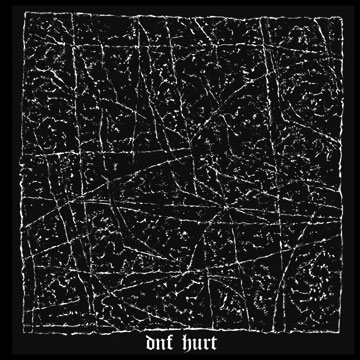 Joshua BTS: What does DNF stand for?

Chad Kawashima – DNF: Originally we were called Duke Nukem Forever, after the video game that was never supposed to come out. 11 years in development and nothing to show for it seemed to mirror the progress our band, in which everything came together at a very slow pace. Now the game is out, our record is also out, and we’ve decided to simply go by DNF. It’s one thing to be 19 years old and want to write songs about video games or inside jokes you have with your friends. It’s a whole different thing to be 25 and spend your day doing a whole bunch of things you don’t want to do, and then write songs about that.

Joshua BTS: We recently reviewed your first EP, Hurt, and we were quite impressed. I especially like that your blend of powerviolence incorporates sludge and slower hardcore with the traditional speed riffin’, but does not dwell in the slower parts for too long. Is the writing process a collective effort and vision or is there a member or two that steers the ship?

Chad Kawashima – DNF: The writing process is definitely collective. One of us will come up with a riff or two, and we’ll work off of that, adding parts, speeding up and slowing down when it seems appropriate. It’s a pretty fluid way of churning out songs, and we all write very easily together. We try to keep the general theme of “fast and slow” but branch out and make it interesting. Kyle puts lyrics over everything once the song skeleton is done, and that’s pretty much how we’ve written every song to date.

Joshua BTS: Give us the skinny on the record. Where, when, and whom did you record these tracks with?

Chad Kawashima – DNF: We recorded it in 2 days during April 2011 with Alex Estrada at the Earth Capital Studios in Los Angeles. Alex is a great friend of ours and came highly recommended by many bands in our area. The recording process was very laid back and we are really happy with the results.

Joshua BTS: How did you come to link up with No Idea and High Anxiety Records?

Chad Kawashima – DNF: We were hooked up with High Anxiety/ No Idea through Chris Colohan. Touche Amore ended up playing a few shows with Burning Love and Elliot sent Chris the tracks for Hurt right after we’d finished recording them. We had been deciding whether to self release the 7″ or look around for a label, and High Anxiety seemed like the perfect fit for us.

Joshua BTS: What are some of the lyrical motifs listeners will find throughout Hurt? It would appear that while the lyrics are not overtly political like contemporaries such as Dropdead, the themes are still serious and introspective on a personal level. Is this a fair assessment?

Chad Kawashima – DNF: The lyrical themes are dark, to say the least. Depression, anxiety, hopelessness, etc. That assessment is definitely fair, we don’t see ourselves as a political band. I think all of us our passionate about issues, but we try to keep it out of our lyrics. One thing we have figured out over the course of being in this band is that life doesn’t get any easier as you get older. Our lyrics and songwriting have evolved to reflect that over the years. 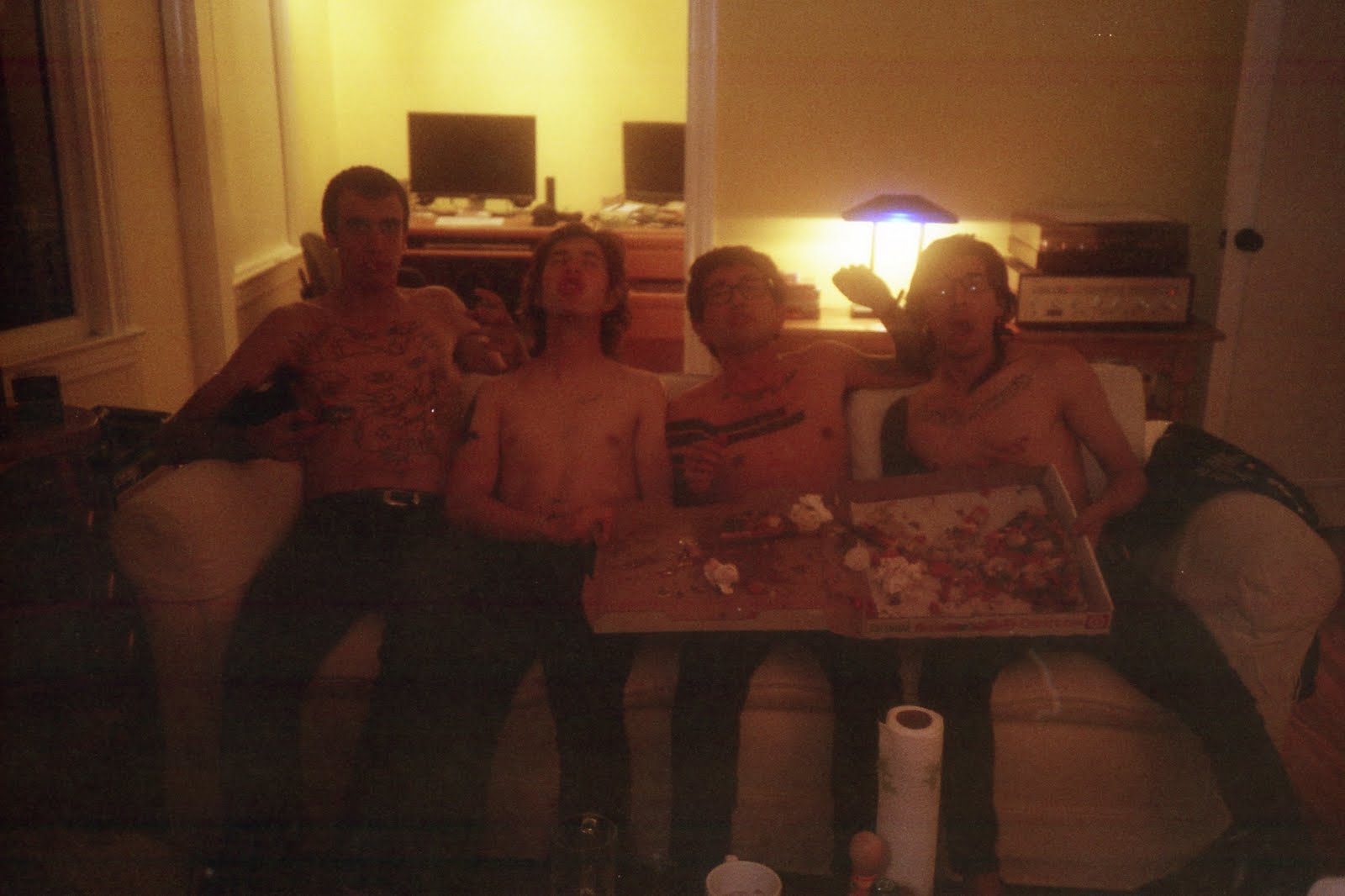 Joshua BTS: With members in other active bands- Do you foresee DNF taking up a significant amount of time? Or do you view the band as more of a side project?

Chad Kawashima – DNF: I hate viewing DNF as a “side project” because we have been playing together for so long, and because we are all very passionate and committed to it. However, all of us have other things going on, and DNF will probably never be a band that pays the bills. In the future we’d all love to do a few DNF tours and spend more time putting out records, but for now, we all have rent to pay, so we’ll stick to playing whenever we find a free moment to do so.

Joshua BTS: I think many people who hear that DNF features members of Touche Amore and Trash Talk will be somewhat surprised by your sonic attack. Was it your intention to keep your sonic approach to DNF far away from your other projects’ sound?

Chad Kawashima – DNF: It was not our intention originally, we just wanted to play as fast as possible. As time went on, fast parts got faster and slow parts got slower. Everything got louder, noisier, and a little more raw. I could never see myself playing in a band that was every considered “accessible”. I love extreme music ,and DNF will continue to play that, regardless of how our other projects sound.

Joshua BTS: Who crafted the cover art for Hurt? And what, if any, significance does it have with the lyrical motifs listeners will find on the record?

Chad Kawashima – DNF: The album cover was actually a painting done by Sam’s dad, Jack Bosson. He painted it in the late 70’s and we had always seen it around Sam’s house. When it came time to figure out art for the record, we realized that the painting would look really great as a 7″. There isn’t really any significance in conjunction with the lyrics, but the cover does look dark and chaotic and makes it stand out from other 7″s out there. 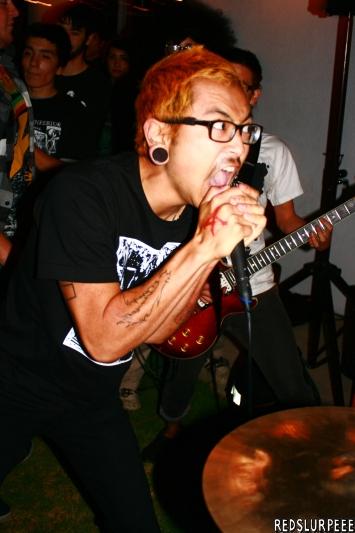 Joshua BTS: What bands or artists are exciting you these days?

Chad Kawashima – DNF: Oh man this is tough. I think this is an awesome time for new music and there are a lot of exciting bands. Young And In The Way, Nomad, Loma Prieta, Mauser, Scapegoat, Perdition, Hoax and Anhedonist have been dominating my turntable lately, as far as US bands go. There are so many amazing bands out right now, I could easily make this question span the length of the entire interview, but I’ll leave it at this.

Joshua BTS: When you are not busy writing and performing with DNF and the numerous other projects you are involved with- What do the daily lives of the DNF crew look like?

Chad Kawashima – DNF: Elliot and Sam are on tour or in the studio for many months out of the year. So those guys can usually be found hanging out at home and decompressing during a rare week or two when they’re not on the road. I work full time cooking at a busy vegan restaurant, and Kyle works full time at a Whole Foods Market in San Francisco. Our daily lives are pretty tame, just getting by and keeping the bills paid.

Joshua BTS: What is in store for DNF as we head into 2012? Any new material or tour plans in the works?

Chad Kawashima – DNF: We are going to attempt to make it into the studio sometime this summer, as long as everyone’s schedule permits. A west coast tour is also tentatively in the works, but we have no clue when everyone’s time off tour/work will line up correctly. When it’s time for it to happen, you’ll hear about it.

Chad Kawashima – DNF: Thanks so much for your interest, we appreciate it. Stay punk!

Order Hurt at No Idea Records