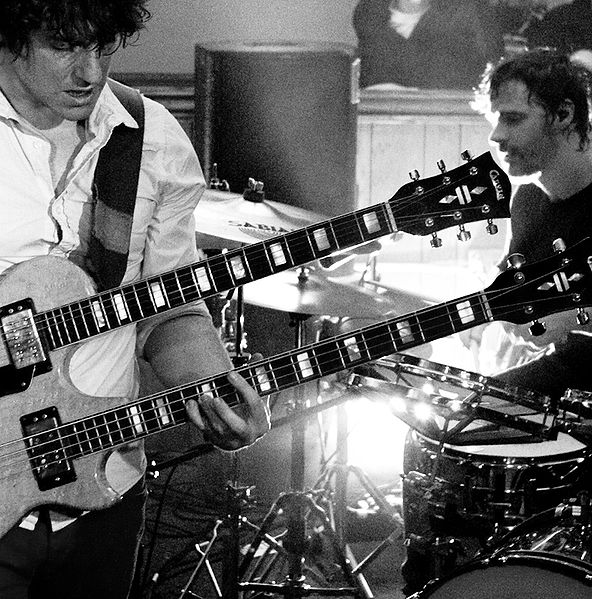 El Ten Eleven are one of those up-and-coming bands that just sit up and make you take notice. Incorporating elements of post-rock, instrumental rock, dance pop, synth sounds, and looping goodness, their melodies and rhythmic work are just something that has you bob your head in congruence with their tuneage. Their new record, It’s Still Like a Secret is officially being released in November, but the band is selling it on their current tour with Martin Dosh (Dosh, Andrew Bird) and Baths.

The interesting thing is that this duo makes music that sounds like an ensemble of musicians thanks to looping tactics and their experimental sound. I caught up with Kristian Dunn (double-neck guitar/bass, and fretless bass) and Tim Fogarty (acoustic and electric drums) of El Ten Eleven while they were in Pittsburgh last week.

Adam Rauf (BTS): First of all, you guys have a new record that just came out, so why don’t you tell me a little bit about that and the work that went into it.

Kristian Dunn (El Ten Eleven): It actually comes out in November, but we’re selling it on tour. The reason it’s coming out in November is that our publicist wanted time to send it out and get the word out about it to zines and all of that stuff. But we said we’re going on tour and we need stuff to sell, so we asked if it was cool and they were like “Yeah, that’s cool!”

We basically decided on this record to work the songs out live before recording it. For the first three records, we went on tour after recording the songs, but we wanted to get this together more this way. It was a little bit disjointed because we’d go on the road, come home to record a little bit, then go out again, and come record again, etc.

Rauf BTS: So, did you do it on your own, or did you go to any studios for this effort?

Kristian Dunn: We did it a few different ways, going between ourselves and having studio engineers. I prefer that though, because even though we’re control freaks and know what we want, it’s nice to let someone else think about the recording so we can focus on making the music.

We’ve done enough records on our own. We should find someone as good at engineering as we are at playing the songs.

Tim Fogarty: We learned a lot doing it ourselves and having other people do it. A couple times it came up really really good, and it just sounded fucking amazing. We did probably 4 songs on our own and the rest outside. Every time we record, we learn what to do and what not to do. It was quicker, but more sporadic. You know, we knocked it out. 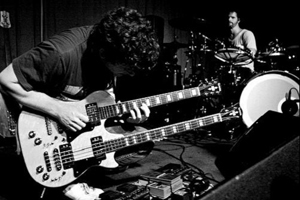 Rauf BTS: So how do you feel that your sound has progressed over these years? The last one was kind of more dance-pop, while the first two leaned more towards post-rock.

Kristian Dunn: We’re refining our work. We’re taking the best elements of all three records, or at least what we think are the best elements to us, into the new record. It’s definitely not a post-rock record, and it’s definitely not an electro record. It’s just something new that we’re trying. I think we succeeded, I think the people will speak for that.

There are definitely people who are more fans of the first record and the grooves, and there’s people who are fans of the third record and the danciness, so they may be like “I don’t know about this ethereal stuff on here.” But we’re being honest and putting out what’s real for us. I think we were a little ahead of the curve. When we put out the first record, it didn’t really catch on at first. I think it took a long time. So even if people don’t like this record right up-front, it seems like it might be two years before everyone kind of “gets it.”

Rauf BTS: There’s obviously a lot of gearheads out there, so I was wondering what stuff was essential to your sound?

Kristian Dunn: Loop pedals [Boss RC-20XL], and Whammy Pedals [both the old one and the new one]. We don’t use any MIDI Clock or sequencing, it’s all done live, so it has to be precise.

Rauf BTS: Well, what about the double-neck guitar/bass combo? What made you decide to go that route?

Kristian Dunn: When we started, I’d have a guitar, and a bass. So I’d have to keep switching back and forth between the two. Set the bass down, plug in the guitar, put that down, unplug it, put in the bass, so it just got tedious. It was a pain in the ass. So I thought “Ooh, doubleneck!” Then I realized I could put the switch in the middle and do both at the same time.

Rauf BTS: Do you use standard tunings?

Kristian Dunn: No, definitely not. I kind of have to use weird tunings so that I can play open strings on the guitar while tapping on the bass.

Rauf BTS: What were your biggest influences growing up?

Kristian Dunn: Definitely my parents. But as far as music goes, I think the first record I ever bought was the soundtrack to Star Wars. It’s brilliant, I love it. 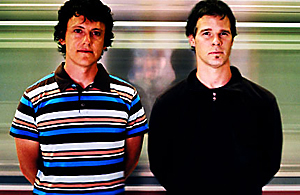 Rauf BTS: But nothing got you into looping straight-away?

Kristian Dunn: No, not at all. I mean, I knew what I wanted to do. The looping was actually Tim’s idea. He heard of it from this guy named Jon Brion. He scored tons of stuff, but he plays in LA, or used to just about every week just by himself with piano, drums, guitar…he would loop entire songs.

People in the audience would yell out stuff like “Fleetwood Mac” and he would just launch into it by doing looping. Mind-blowing. He’s like a musical encyclopedia.

Anyway, so I had a friend with a loop pedal and borrowed it, and went “oh wow!” and that was the beginning of it.

Tim Fogarty: My biggest thing was The Who, you know, Keith Moon. I mean stuff like Dosh as well. But I was really into David Bowie. I mean every other day HBO had like a Who concert and David Bowie and I’d just watch it all summer.

Rauf BTS: What made you decide to use electronic pads with your acoustic kit?

Tim Fogarty: I wanted a low kick drum, and I played in this band called Duster. I had an electronic kick and electronic snare from a drum machine. And really it was to get different sounds. I wasn’t that good at drums at the time, so I thought “Well, if I can’t play well, I should at least play some shit that sounds cool.”

I could never play an all-electronic kit, but it’s nice to have the combination.

Rauf BTS: This new record, is it coming out through a label or self-release?

Kristian Dunn: We talked to several labels actually about releasing it, but we decided to do it on our own. It’s nice because of the marketing they provide, but we realized that we love to have control of everything and we do a pretty good job on our own, so we don’t really need it.

The only thing that a label can provide really is marketing, but it’s a roll of the dice if they’ll actually do a good job and try to promote you or not. And for some bands, it really works, for others it doesn’t. Maybe someday we will find a label that really wants to push us, but until then, we’ll do it ourselves.

We do have a publicist, but they don’t put up posters or anything. They just get the articles written about us and distribute the music.

Tim Fogarty: I have no idea. I am totally cool with doing it on our own. We’re not waiting for someone to step in. We’ve done it this way since the beginning and it’s worked for us, so as long as we don’t have to lean on anybody, just ourselves, I’m cool with it.

Rauf BTS: Keeping along this line, what do you feel about the record industry in general? Is it going the way of the dinosaur? Now you don’t even need physical medium to get your music out there.

Kristian Dunn: The music industry has been turned upside-down. The gatekeepers are not keeping the gate anymore. It’s over, now we have control. You just go out there and play music. It takes a lot longer, you may be able to make a living off of it.

Now, nobody goes to radio, they go to zines, blogs, Pandora, etc. That’s where we are. Music fans are really good at sniffing out the real stuff. They’ll find the things that are genuine and those artists will find success. 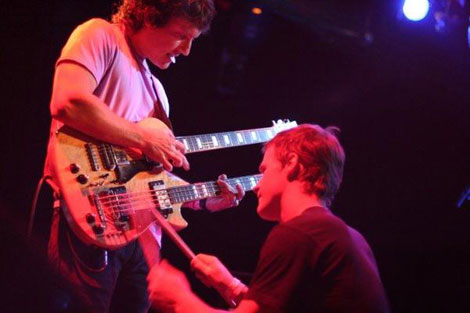 Rauf BTS: How’s your music been accepted by the local scene? [El Ten Eleven are from Los Angeles, CA].

Kristian Dunn: It’s been good. They’ve been receptive. It took years for it to catch on. We’d play a show and there’d be no people, then the next one there’d be 80, then 25, then over 100. But the last few years, we’ve been playing packed shows which has been great.

Rauf BTS: As far as venues, do you guys like playing bars, or festival lineups, or all-ages clubs, or what exactly?

Kristian Dunn: All-ages for sure. We really like the fun and high-energy. We don’t care about the alcohol, although some venues are okay with it. I like playing everywhere, but all-ages tends to have a lot more energy.

Rauf BTS: Personally, I hated 18+ and 21+ shows because I’d always miss bands that I’d really want to see, and sometimes only because of a few months to that landmark birthday.

Kristian Dunn: Yeah, we get tons of e-mails that say like “Can you get us in?” or “Can’t you play an all-ages show?”

Rauf BTS: Well you know what that means. You just have to keep playing shows in their town until they turn 21, so they can come see you then.

Kristian Dunn: Yeah (laughs), hopefully they’ll still like us by then.

Rauf BTS: My final question. What’s your favorite food to get on tour?

Tim Fogarty: I’m so into anything. Everyone’s crazy about Mexican food. I like it, I’ll eat it. But if I’m by myself, I like to get sushi or Chinese food. But yeah, I think Japanese is my favorite.

Kristian Dunn: I try really hard to be healthy. Our favorite restaurant is Ming’s in Rochester. We look forward to going to Rochester just to eat there.

Rauf BTS: Well cool man, I really appreciate you guys taking the time to do this interview with us. Best of luck on tour, and I hope everyone enjoys the new record as much as we do.

Tim Fogarty: Thanks man, we’ll be back soon.