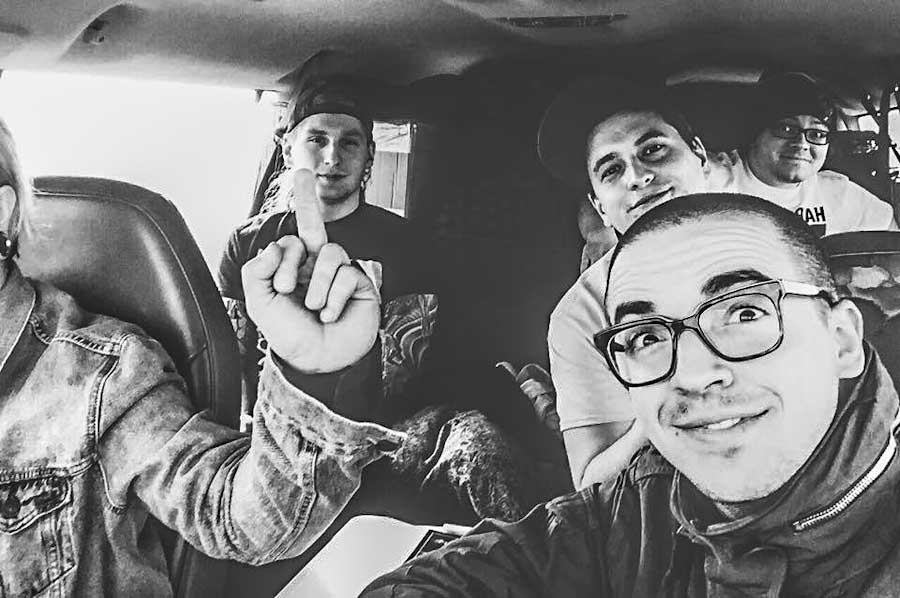 Milwaukee, WI’s Falter are one of the most promising up-and-coming bands holding it down on the DIY touring circuit from coast to coast. The band’s 2015 releases on Hydrogen Man Records, the Darker Ep and split EP with Boroughs, displayed unquestionable prowess with a keen sense of all things evil in the ever expanding realm of hardcore punk and powerviolence. The band has embarked upon a recent DIY West Coast tour, so we figured it a proper time to catch up with singer Lenny Janiszewski, see how things are on the road and see what’s coming down Falter‘s pipeline in the near future.

Joshua BTS: Now that you’ve had some tour time under your belts since your latest release on Hydrogen Man Records, Darker (2015)- What do you have in the works for the next studio effort?

Lenny: We’re halfway through writing our first LP right now. We’ll be recording with Matt Russel in Chicago who recorded Darker and our split with Boroughs. The record will be out in the second half of 2017.

Joshua BTS: Falter is a band that tours the US DIY circuit with frequency. I noticed that you do not make your tour venues public, just the routing. More of the ‘ask a punk’ kind of vibe. What are some of the challenges you face approaching your booking this way?

Lenny: In the past we did this because so many shows would be up in the air till a couple weeks before the tour. That way we could at least give friends an idea of our routing before we knew where the shows were exactly. Recently we’ve been keeping info off the internet just to avoid alt right assholes reporting diy spots and houses to the cops. Joshua BTS: How is the current full us tour going? How do you guys kill time on the road?

Lenny: Tour is going great. This is the best tour we’ve been on. We’ve met a ton of incredible people and played awesome shows in every city we’ve been to. Our favorite time killer is stopping at state parks. We actually plan days off sometimes just to see natural areas that are far from home. We also like to play magic the gathering and go to arcades.

Joshua BTS: What is some of your favorite current music both new and old?

Lenny: That’s a tough question. As far as stuff I jam in the van- mostly just powerviolence and indie shit. Rob (guitar) listens to a lot of death metal and industrial. We pick the music ’cause we do the driving. Joshua BTS: Your hometown of Milwaukee has long seen an interesting mix of underground bands thriving. What’s getting you excited locally these days? How have you seen your local scene evolve over the last several years?

Lenny: I’m most excited about several queer powerviolence bands that just started. Officer Dead, Chvrch ov Misandry, and Sceptile. Pig’s Blood is a new death metal band featuring members of No Brainer. Northless is awesome doom metal. Stone is a newer hardcore band to check out if you’re into tough new york style stuff. Stomach Pump is an awesome 2 piece pv band. As far as the scene evolving- there is more queer representation and less macho shit. More young kids are coming out and bands seem to be getting faster. We have less house spots so shows have shifted towards bars recently but we just opened a new all ages diy spot. Things are good here.

Joshua BTS: For those of us from out-of-town and if ever passing through- What are some must sees in Milwaukee? Food, music, art, or otherwise? What does Falter have on the plate moving into mid-2017 and beyond?

Lenny: Grant Park (also called 7 bridges) just south of the city is a really cool natural area that has trails down the bluff to the beach on Lake Michigan. I don’t really eat out but I know Ian’s Pizza, Comet Cafe, Chopstix, and Honeypie all have good vegan options. The Milwaukee Art Museum is incredible if you have several hours and don’t mind an entrance fee.

After we record the LP we’ll be hitting the road for a couple weeks in the fall. March 9th we’ll be in Louisville for Pissed On‘s EP release with Full of Hell, Wvrm, Pains, Pinion, and Wolfxpiss. We’re doing a weekend with Mellow Harsher that includes playing Discontent Fest in Peoria July 22nd as well.