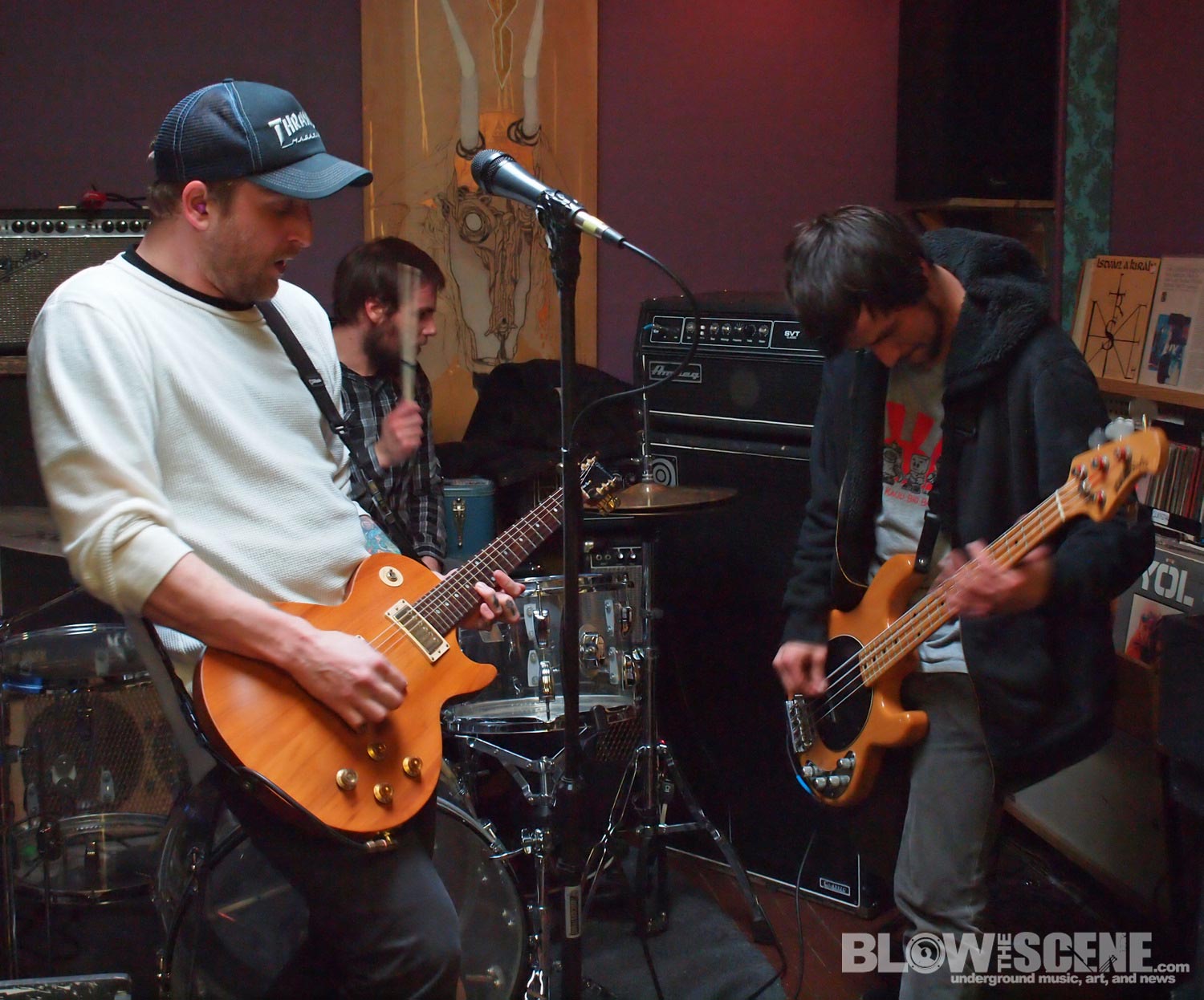 Today we have a special double-feature for Blow The Scene readers around the world. We recently caught up with Philadelphia’s Gods & Queens who were the subject of global notoriety with their recent European tour, as the band was in a severe van accident in the Czech Republic that cut their tour short and nearly ended their lives. What could have been a horrific catastrophe for the band, friends, and fans, turned into a shining moment, as the worldwide music community stepped up and rescued Gods & Queens during their darkest hour.

Although the band is still recovering both mentally and physically from the accident, Gods & Queens kicked off a mini-tour weekend on Friday, starting with a hometown performance at Beautiful World Syndicate with friends Creepoid. Enjoy this double feature interview and show gallery with pictures by the ever-talented Anne Spina Photography and interview by Joshua T. Cohen that goes in-depth on the now infamous accident, the long road home, recovery, and plans for 2012 and beyond.

Joshua BTS: Greetings. Thank you kindly for taking a few moments with Blow The Scene readers again! Quite a lot has happened since we last spoke, so let’s dive right in.

Your recent European tour was cut short when your van crashed and flipped several times on Czech highway. Scary stuff. Can you describe the events leading up to the crash and what caused this accident? How many shows did you complete before this happened?

Jamie Getz: We were a little over half way through the tour. We did France, Italy, Slovenia, Croatia, Bosnia & Herzegovina, Serbia, Hungary, and Austria then we crashed while cutting through the Czech to get to our show in Dresden Germany. We had 9 shows left that would have been Germany, Holland, and Belgium.

The accident…to be honest man, I was asleep. I don’t know what the hell happened. I know that this was our 4th time over there and since 2009 the highway in the Czech has been under construction the entire time and we always hit a detour. It was like 5:30 p.m., wet, pitch black, and we were on some fucked up back road. Why we were on this back road I don’t know. I mean, there’s a detour on the highway that’s fine, but where do the tractor trailers and buses get detoured to? I’m sure the GPS put us on this road and our driver blindly follows the GPS, so there’s that. GPS, what a wonder of the world, kids these days don’t know how to read maps. Anyway, I wake up to an “Oh shit” and “Oh fuck” then I look up and next thing I know my face is smashing off of the roof and I feel my head touch my back and all I think is “OK, I’m breaking my neck.” and I could see the gear in the back of the van rolling towards us and hearing it smash around was incredible to be honest. This enormous thunder crashing sound. We stop rolling and I wound up under the steering column, yelling for everyone to tell me they were OK, everyone responded except Jeff and Ben pulls me out through the windshield and I take off running for help thinking Jeff was dead. Pretty awesome way to wake up from a nap!

What caused the accident is up for debate. Our driver said a car in front of them slammed on the breaks and he had to swerve to miss the car. Ben said he passed the car, and before you know it, there’s a hairpin turn right in front of us, and we wound up rolling down a hill. Who was at fault? I don’t know. All I know is that it wasn’t me, yet somehow this shit has costs us tens of thousands of dollars. 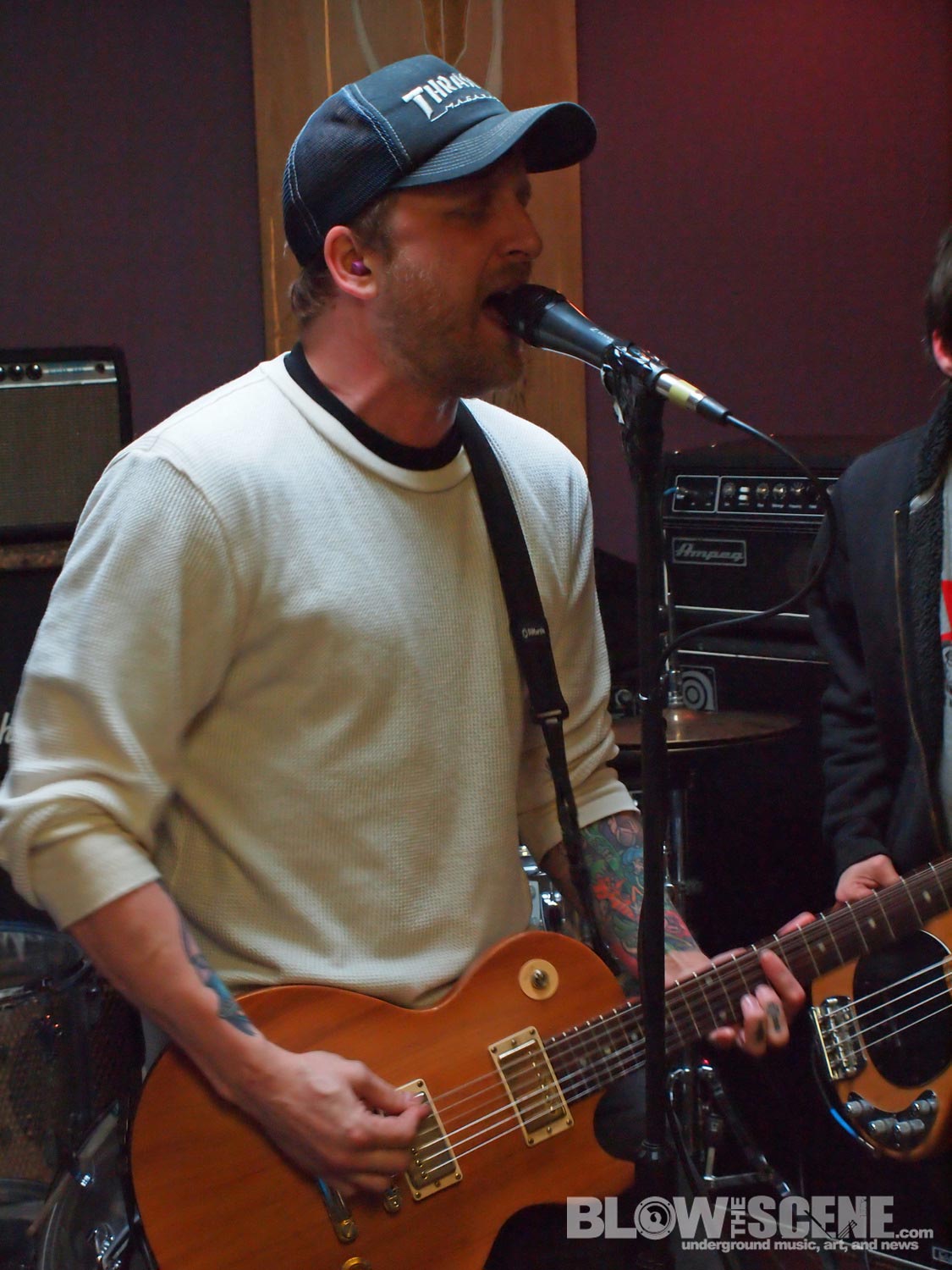 Joshua BTS: The worldwide music community responded to the crash almost immediately with social media posts and emails circulating across thousands of websites asking for denotations and track purchases on bandcamp to help out. Did you expect such a global response to your situation? Describe the events following the crash and how you made it back home.

Jamie Getz: To be honest man, I didn’t really expect anything from anyone. I just knew that we had a very limited amount of money on hand. We were just high jacked at the hospital by police and hospital staff, then hotel, and tow truck driver. Before anyone thinks “Fuck that, I wouldn’t have let the police do that to me.” Yes you would have. You all 100% would have. I knew that my credit card wasn’t going to float us and it was like a last ditch effort to ask anyone for anything. None of us really wanted to ask anyone for help but, no one really plans on crashing a van while on tour. That’s never really in your daily budget when you’re booking things. Van is this, driver is that, gear is this as well, gas will be around this, and oh, crashing a van as well! It doesn’t work like that.

Asking for help seemed so fucking corny to me but it was a very last ditch effort to ask anyone for anything. Which is why we suggested that if you’d like to help to please just purchase the E.P., a few thousand people did. A few people donated more as well. It was honestly overwhelming to the point where we just shut down almost.

A global response was the last thing that I was thinking about. The only thing I was thinking was that now was as good of a time as ever to move to Dresden and stay there. We pretty much got rescued and were taken care of by the people at the AZ Connie here in Dresden. We owe them a lot. I think the fact that we were in Europe is what really set off a chain of events. Not only were we fresh in the minds of the people in Europe but we have a good crew of friends and cohorts there that help us out. Also, Dave & Liz at Earsplit, Andy & Linsday from Robotic Empire, Robert & Steffan from Bis Aufs Messer, Andrea & Iacopo all threw things out via their email lists and withing a few minutes my email was flooded and my Gchat was just going insane. Getting into an accident is every bands nightmare. Getting in an accident in a different country is even worse. Hell, maybe it was just a slow news day for everyone?

Getting back home was honestly kind of fun. I know that sounds whack but it was. I’ve been lucky enough to tour Europe so many times in my life that I feel bored at times and I know that sounds cocky but I’m being honest. Getting home from Dresden was great, because myself, Jeff and our friend Sarah took trains from Dresden Germany all the way back to Ostende Belgium. Along the way we stopped in Berlin for a few days, Aachen for a day, etc. It was semi enjoyable. I actually enjoyed sitting on the train watching the countryside zip past. This was enjoyable for me, not so much for Jeff. Every time we hit a bump or something I could see him wince in pain. Ben and Gertjan got a ride home back to Belgium from another friend of Gertjans who happened to be on tour and semi near Dresden at the time.

Joshua BTS: How has your recovery been since the crash? I understand your drummer is still working through some of his injuries?

Jamie Getz: Jeff is still janky. He basically has no rotation in his arm, and looks sideways from now on. My neck and back have crushed discs in them which is really starting to lose it’s novelty. What do we do though? Sit around and say “woe is us?” Or get out there and get back in action?

Joshua BTS: With such a traumatic experience are you a little gun-shy to hop back in the tour van or do you have plans of making up the canceled dates?

Jamie Getz: Not gun shy at all. A few people have said things like “Well, that’s gotta be the last time you go over there.” or “Fuck that, I’d never go on tour again.” That’s stupid stuff to say. We got into a car accident. It sucked and it fucked up a good portion of our lives, mentally, financially, and creatively but, I drive in a car every single day of my life. Being on tour had nothing to do with it. The way I look at it is that after all of these years on tour with bands since the age of 16, I never even really had a flat tire, so I was due for something good to happen. Here was everything in one fell swoop.

I wanted to go back to Europe this summer and finish those 9 shows, I even started working on them. Then I decided against it. I’d like to do a proper L.P. before we get back over there. 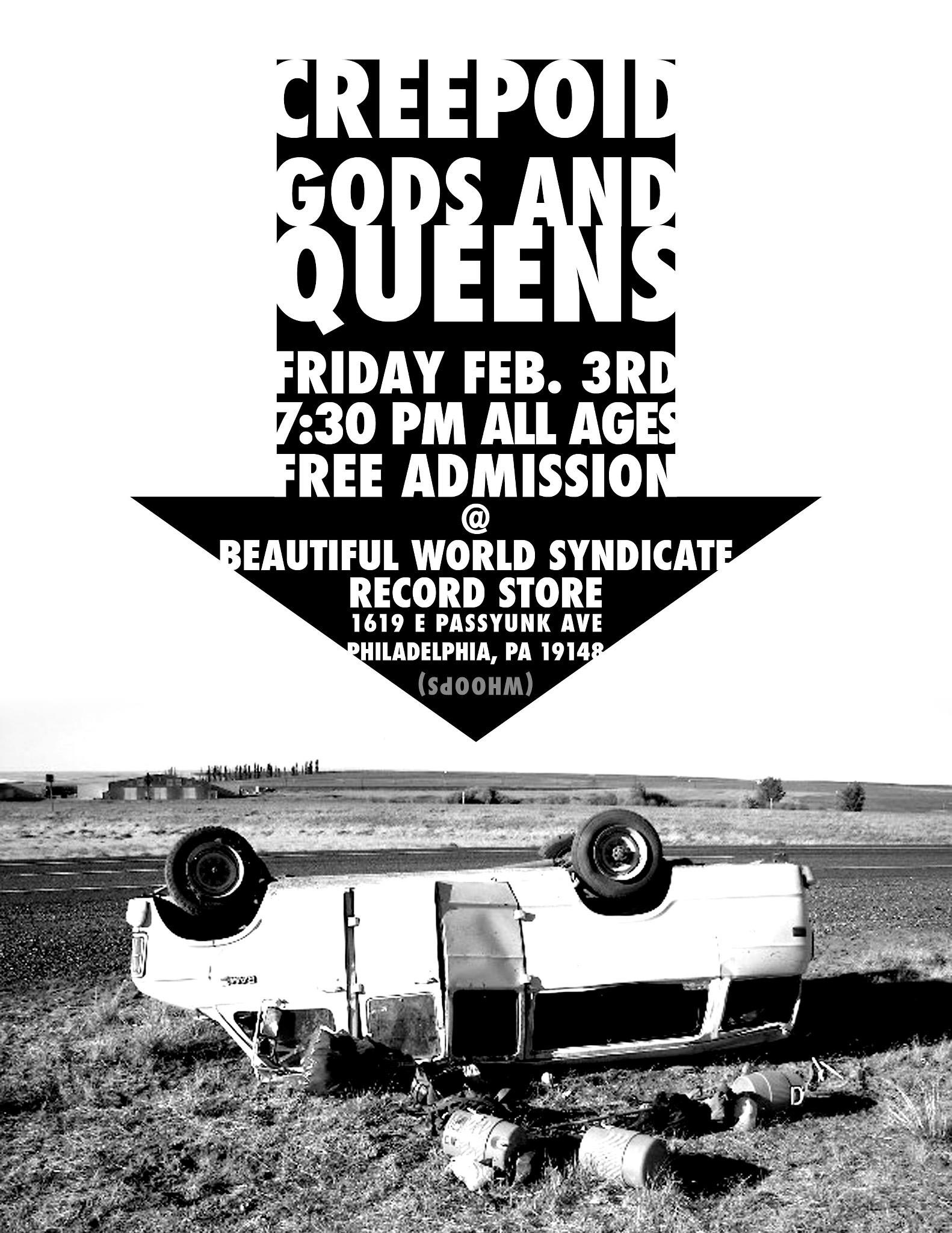 Joshua BTS: It would appear there is a silver lining to this situation as many thousands of music fans were turned onto your music because of the notoriety surrounding the crash. Looking back- Has some good come from this horrific event?

Jamie Getz: Sure, I mean a ton of people paid attention to us for that period. Andy Warhol said it though, everyone gets 15 minutes. Maybe that was it for this band. If so, that’s OK. I’ve been very lucky in my life playing music, and if that’s all this band gets was a few days of notoriety because we almost died, that’s OK! A few of my friends have asked me if I’m bummed out that this was one of the only ways for people to hear about this band on a grand scale. To be honest, yes but those are the breaks. What we do with this attention is up to us.

Joshua BTS: Your first Philadelphia show since this crash is happening in about 24 hours with Creepoid and is a free show. Awesome. We’ll be there for sure. Will your drummer be participating in this home show? And why the decision to have a free show?

Jamie Getz: Jeff actually can’t play. We all thought (himself as well) that he’d be in action for this. We started to practice and within a few minutes it was clear that wasn’t going to happen. So we have our friend Dave from the band Psychic Teens filling in. Dave has played with us before, he’s a great person, and a good drummer as well. He offered up his help and we accepted it. We like Dave a lot. Jeff will be at the show but not playing. Jeff will be along for the entire weekend of shows but not playing at any of them. Free show? Why not. It’s all good.

Joshua BTS: You have some pretty stellar dates this weekend and into March. Busting out any rarer tracks or gems for longtime fans?

Jamie Getz: Rare tracks? Ha. We’ve been playing the only songs we know. No new tracks or anything either.

Joshua BTS: What does Gods & Queens have in store for 2012? More releases or tours in the works?

Jamie Getz: We have a split 7″ coming out as soon as I get it together vocal track wise and we are going to buckle down and attempt to do another proper full length record. That’s about it. 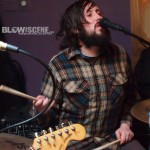 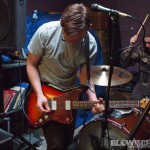 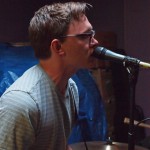 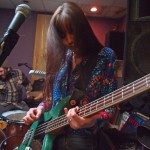 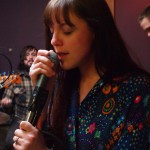 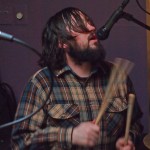 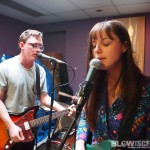 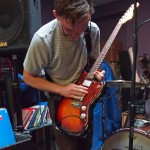 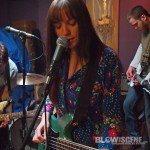 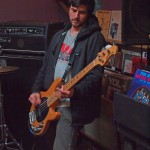 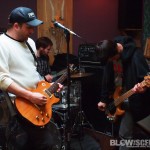 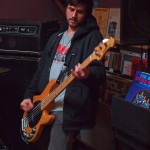 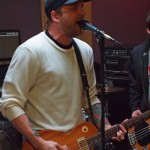 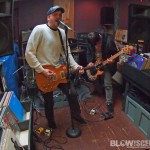 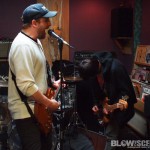 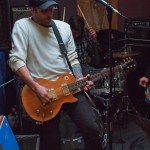 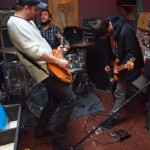