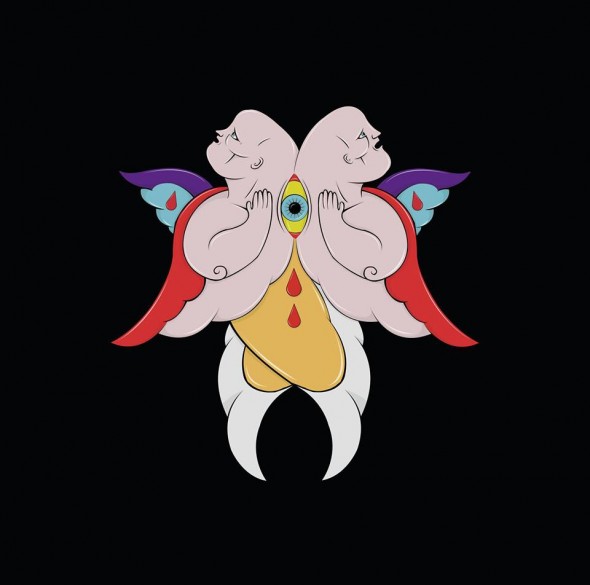 Readers might remember Michael Kirsch from a few years ago. His band, the New York-based trio Grandfather, had just finished recorded with Steve Albini (production credits include: Nirvana, PJ Harvey, Pixies) back in 2011. Grandfather had just completed their Kickstarter campaign to release their LP, Why I’d Try, while generating a lot of social media buzz. We conducted an interview with the band just following the release.

We’re very pleased to have the band back, albeit as a four piece, with new album In Human Form just hitting streets. Produced and mixed by Alex Newport (Mars Volta, Melvins, ATDI, The Locust) and mastered by Howie Weinberg (Nirvana, Soundgarden, Smashing Pumpkins, Deftones, Metallica), the record is sure to make waves soon enough.

Adam Rauf (BTS): When we last heard from you, Why I’d Try was just coming out and getting lots of love around the web. Are you guys thinking the self-release route has been successful so far? Why or why not?

Michael Kirsch (Grandfather): I guess that depends on how you define success. Artistically, I think we’ve been enormously successful. Why I’d Try was a defining experience for the band. Working with Steve Albini was a dream come true, and the experience solidified our musical identity as well as our ideas about recording and releasing music independently. Our new album In Human Form encompasses our vision entirely and is the most successful creative endeavor any of us have been a part of. From the conception of the album to its completion, we accomplished all of our goals.

From an operational standpoint, we still have a lot of goals we haven’t yet achieved. For instance, we haven’t been able to tour as much as we’d like to just yet, though we’re confident that this album will bring us closer to that reality. Things are growing organically, from the ground up and I hope that will lead to longer lasting relationships between us and anyone who’s listening.

We really believe that the success of a band lies in the hands of the audience more so today than ever before; so we’ve decided to give our album away for free, and simply ask for anyone who digs it to spread the word. I’m not sure that if we were on a label, we’d have the freedom to give our music away just like that. Since we’re not beholden to anyone other than ourselves, we’re in the position to play outside the system. Artists never made much money from album sales anyway; so for us, success isn’t defined by the number of copies sold but the number of listeners reached, affected, and connected.

Adam BTS: You got some big names to work on this release in the form of Alex Newport and Howie Weinberg. How did you guys swing that?

Michael Kirsch: I think that most people assume getting a “big name” to work with you requires an element of luck. Our attitude has never been to wait for our lucky break. We always figured that if you don’t ask for something, you have no chance of getting it. Working with Alex, Howie and even Steve was simply a matter of sending an email, picking up the phone, and asking them if they’d be into it. Fortunately, they were, and helped us make it a reality even though we didn’t have the kind of budgets that a band on a label might have.

Adam BTS: The record sounds great, by the way. Was the recording process much different this time around since you were working with Alex and Howie? How did it differ from working with Steve?

Michael Kirsch: Thanks! The main difference was that Alex was very hands on as a producer, whereas Steve just engineered the sessions. Also, we spent about a month with Alex in total between pre-production, tracking and mixing, whereas with Steve we tracked and mixed the entire album in 3 days. Both experiences were vital to our development as a band. 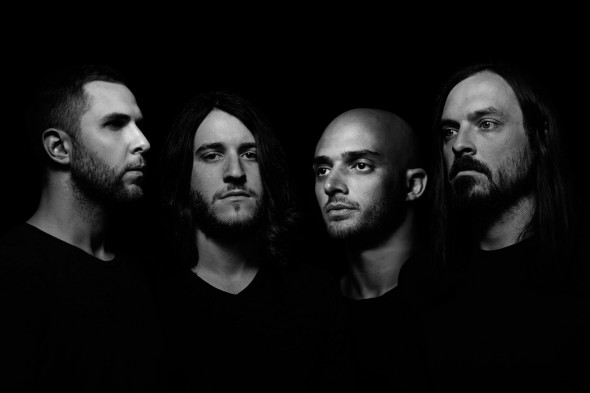 Adam BTS: Was the production and mastering very laissez-faire, or did you have a lot of input on it?

Michael Kirsch: A lot of producers will try to turn a band into something they’re not, whether it’s trying to give them a more commercial sound or getting them to follow current trends in hopes to sell more albums. Alex wasn’t interested in doing that that with us at all. His approach was to understand our vision and bring out the best in us.

In the studio, Alex basically steered the ship. He kept us on schedule, pushed us to our limits as performers, and made most of the decisions about which takes were keepers. If we ever disagreed with him, which was rare, he’d hear us out; though we trusted him like a 5th member of the band. During the mixing process we just let Alex do his thing, and exchanged a couple of notes before he printed each mix. Howie nailed the mastering on the first pass. That guy’s got golden ears.

Adam BTS: You had mentioned you guys had gone through some lineup changes, and now are a 4 piece instead of a 3 piece. Can you talk more about that?

Michael Kirsch: After Why I’d Try, Josh and I were determined to hit the road. As a new band, touring is really tough. The amount of work it takes to find local bands in every city, coordinate with venues and promote is a bit much. Then you show up and play for peanuts, never knowing if there will be a packed house, or an empty room. The first couple of tours really test your limits as a human being, though you have to pay our dues. So the lineup change had a lot to do with finding people who were willing to hit the road, no matter what.

At the same time, Josh decided that singing while playing drums was too stressful, so we decided to look for a new drummer. Phil entered the picture and brought a new energy to the band, pushing us in a heavier direction. He used to play in a progressive metal band. Josh picked up second guitar, and we’ve been a four-piece ever since. It took a while for us to find a permanent bass player, though once Tyler joined, everything seemed to click.

Adam BTS: The making of this record also tested your limits. There’s the story on your site about you guys barely scraping to get by so you could record In Human Form, and getting kicked out of your space and having to crash on couches around the city. How did you guys survive through it, and what were the most rewarding/dire moments of this?

Michael Kirsch: We survived thanks to some very supportive friends. Honestly, the only way to get through it was to constantly remind ourselves that the best music comes from struggle. The highs of playing music everyday balanced out the lows of living in squalor.

I’m not going to get too specific about the most dire moments, but i’ll say that one of us nearly went insane. The most rewarding part of it all was waking up every day and realizing that you’re following your calling, and doing it with friends who are also willing to put everything on the line for something you believe in. I have a lot of old friends who are living cushy lives, and are already making a lot of money; though when I see them, they all say the same thing, “I wish I could play music or do something I love with my life”. It makes you realize that while you might have it rough from a materialistic standpoint, you have a lot of other things that money can’t buy.

Adam BTS: What was the best show you guys have played to date?

Michael Kirsch: We’ve had the most luck down South. The shows we’ve played in Atlanta, Nashville and Austin for instance are just mind boggling, with people swinging from the rafters, going apeshit and losing themselves completely in the music. Crowds in New York are tougher to crack, though the last show we played in Brooklyn might have been the best to date. Something just clicked between us and the audience, and we could all feel the synergy. Our album release show is on August 17th at Pianos in NYC and we’re confident that’s going to be the best show yet. The band is tighter than ever. 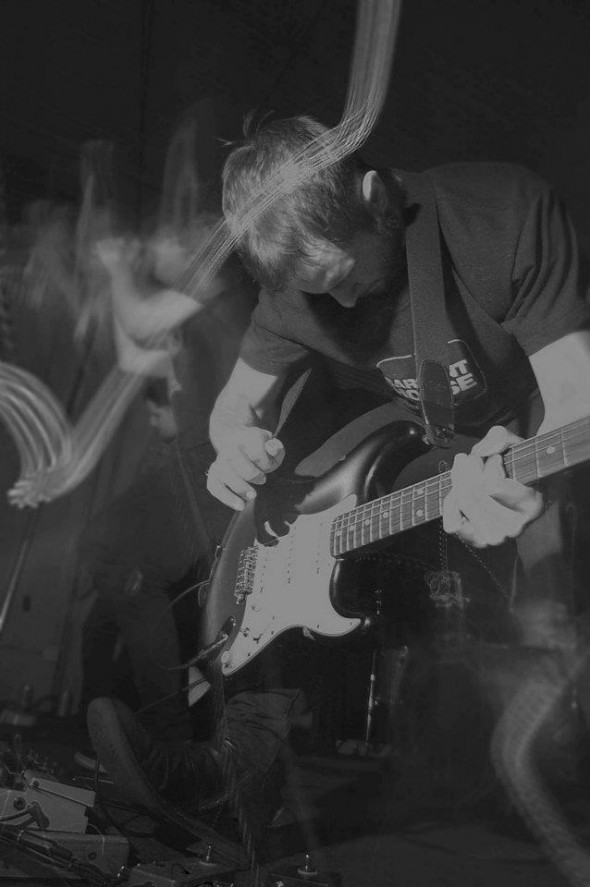 Michael Kirsch: The tours we’ve done have basically been 30 days straight, with almost no days off. It’s hard work and the days are long, but every night is a blast. We live for playing live. I’m most comfortable in my own skin when I’m on stage, so I’m happiest when I’m on the road. The best part is getting to hang out with new people. The hospitality on the road is amazing. We’ve only paid for a motel twice; almost every show, someone opens up there home to us, feeds us and takes care of us.

Adam BTS: Can you talk about the artwork for the album? Was Kendra Elliott involved again?

Michael Kirsch: The artwork was created by the incredibly talented Dimitri Drjuchin. He creates these characters that seemingly exist in some sort of hyper-dimensional reality, which felt very familiar to us. There are a lot of psychedelic undertones in our music and lyrics, which we wanted the art to highlight that. Although our music has a dark worldview, it’s actually meant to be illuminating and uplifting. We didn’t want anything that was overtly dark or morbid, which is what some other artists assumed we’d be into, taking our music at face value.

Like Kendra, Dimitri interpreted our music in his style, creating the image while listening to our album. Choosing an album artist is a tough decision, since it’s a genuine collaboration. It’s important to work with someone you really trust, and we were all stoked to work with Dima.

Adam BTS: What’s next for the band after this record release?

Michael Kirsch: It’s difficult to say. We’re just now getting back on our feet, though ideally we’ll find a way to get back on the road as soon as possible. All we know for certain is that we’re putting the album out, and hope that people dig it, share it and help spread the word.