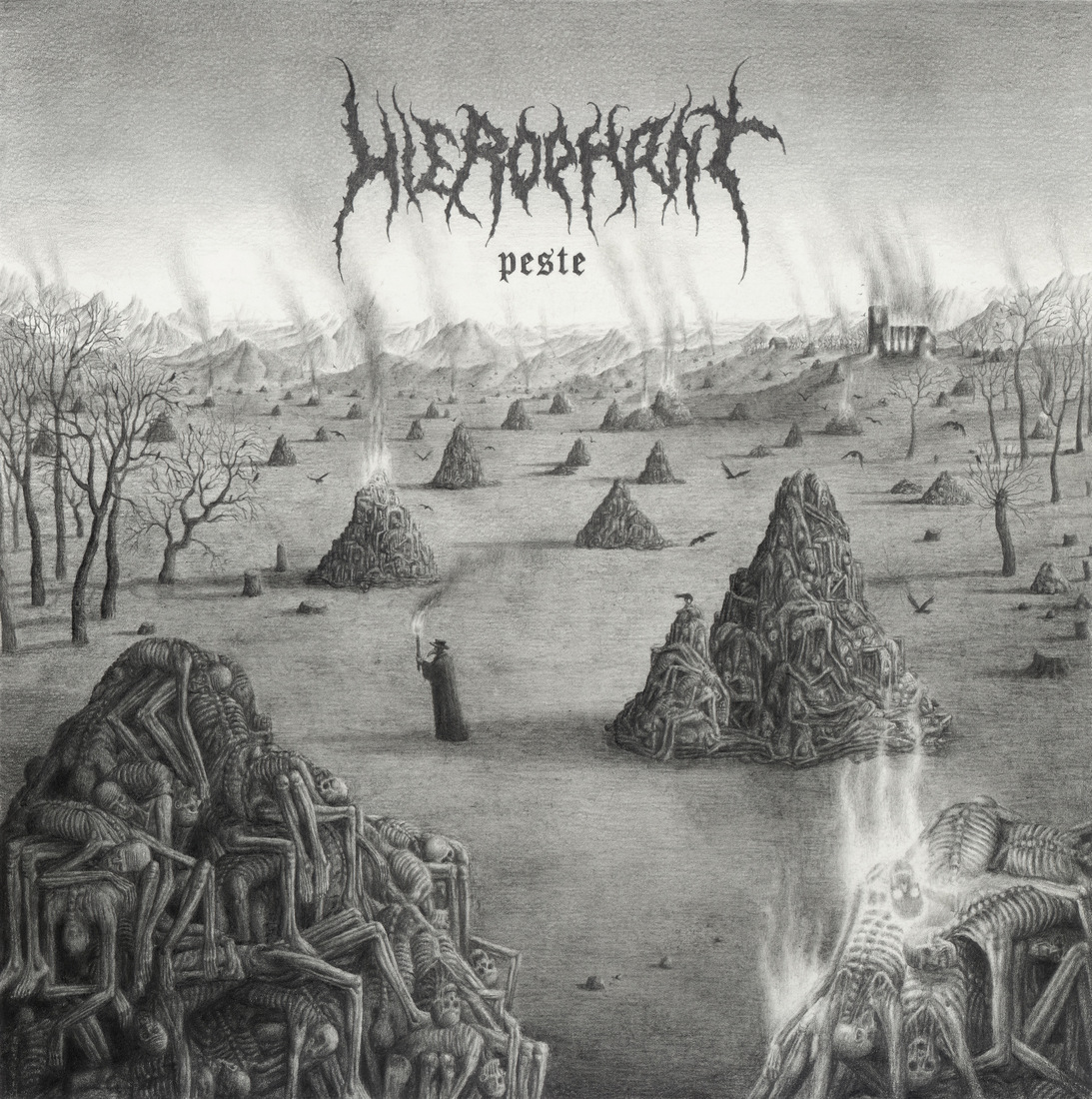 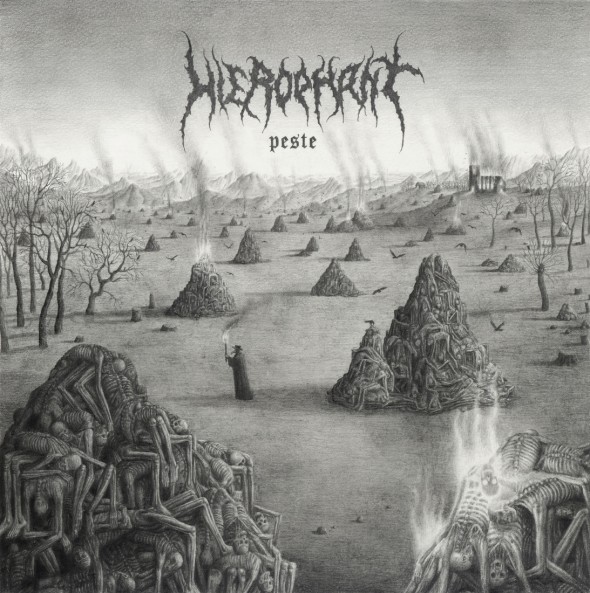 We are pleased to bring Blow The Scene readers a new interview with Italy’s metallic dbeat purveyors Hierophant, as the band prepares to release a beastly new full-length, Peste, via Bride Nine Records on November 25th. Peste proves another advancement in the band’s musical evolution following 2013’s Great Mother: Holy Monster LP, also released via Bridge 9. Blow The Scene had the pleasure of premiering new song, ‘Paranoia’ last week, showcasing the band’s propensity for ground-shaking riffs whilst utilizing a poignant blend of metal and crust.

Hierophant guitarists Lorenzo & Steve were kind enough to discuss the making of Peste and more for our English speaking audiences in this new interview with BTS’s Joshua T. Cohen.

Joshua BTS: Greetings! Thank you for taking some time with Blow The Scene readers from around the world. Please introduce yourselves and your musical weapons of choice with Italy’s Hierophant.

Hi! Here Lorenzo and Steve, both guitar players in Hierophant. Thanks for having us on Blow The Scene.

Joshua BTS: I’d like to focus in on your forthcoming LP, Peste, slated to hit streets November 25th on Bridge Nine Records. The album sounds fantastic, a meaty blend of d-beat laced hardcore and metal, and yet another step forward for the band. When did the writing sessions for Peste begin? What did the songwriting process entail throughout Peste? Do you have a main songwriter that directs the album or do you all contribute equally?

Lorenzo & Steve: We’re glad you like it. ‘Peste’ writing sessions started during the summer of 2013, we kept on working throughout winter. I (Lorenzo) usually bring riffs to the other guys. After that, everybody contribute equally giving a shape to the songs.

Joshua BTS: You chose to record Peste with Alex Conti at MV Multimedia Studio. What is it like recording with Alex? Do you all track separately or live? Did you choose to record to a metronome or without?

Lorenzo & Steve: Alex is a long time friend of ours. Working with him is very smooth and fun. We tracked everything separately but trying to keep a live feel not being slaves of grids. Everything is being recorded to a metronome except break-down parts in order to get them more natural, heavy and groovy. 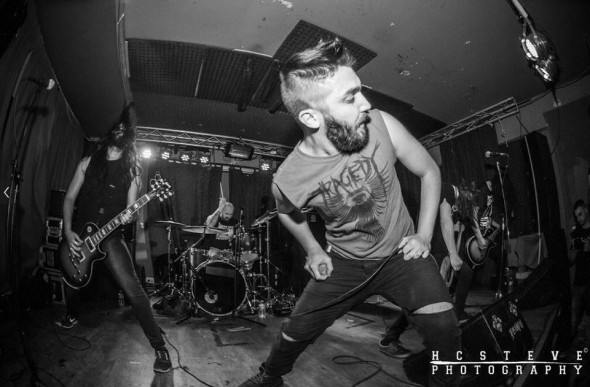 Lorenzo & Steve: We worked with Alan for the previous record as well, he’s very professional and tight on what he does. About the mix, we thought Taylor knew exactly how to make our album sounds great. Hard emailing made communication easy, we just gave them few suggestions.

Joshua BTS: Please give us an equipment overview for the Peste sessions. Any special or unique pieces of equipment employed in studio during the recording of Peste? Any special pedals, heads, cabinets, drums, mics, or like that you experimented with or found to be pivotal to the overall sound of the album?

Lorenzo & Steve: Pretty much our gear. Just tried out few heads combinations. Nothing special. Tuner is the most important pedal we used.

Joshua BTS: Was there anything during the recording sessions of Peste that saw you step out of your comfort zone and try techniques you had not attempted before? If so- what were some of those techniques or approaches?

Lorenzo & Steve: The only ‘weird’ thing we never did before was overdubbing toms on some tribal beats. It was just a standard recording. 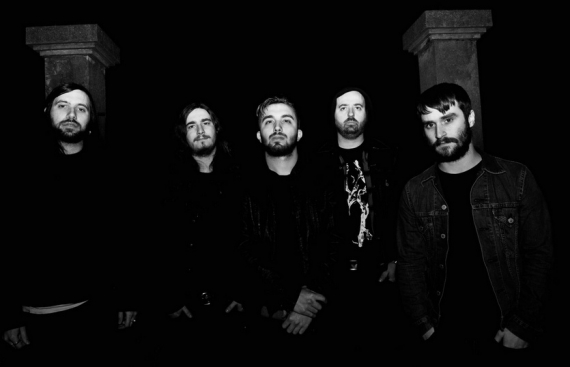 Joshua BTS: What are some of the lyrical motifs listeners will find on Peste? Do you all contribute to the lyrics and themes?

Lorenzo & Steve: ‘Peste’ represents our point of view on what society is now. Who contributes with lyrics is just Carlo, the singer of our dreams.

Joshua BTS: Does the cover-art of Peste hold any significance in context with the lyrical motifs on the record? Who crafted the cover art?

Lorenzo & Steve: Yes it does. The goal was to create a violent visionary world in line with the lyrics concept. Daniele Castellano, a very talented illustrator and great friend of ours crafted it. He also sings in a band called Lantern.

Joshua BTS: How did you come to link up with Bridge Nine Records? How do you feel about the working relationship thus far?

Lorenzo & Steve: We were looking for a new label and we luckily found a family called Bridge Nine Records. Relationship so far has been just awesome. They’re really great guys who give us all the support a band could ask for.

Joshua BTS: What bands in Italy and abroad have your attention right now? How is the music and art scene in Italy currently?

Lorenzo & Steve: Italy used to be a good place for art and music back in the 60/70’s when we had a lot of great singer songwriters, progressive bands and art films directors worldwide renowned. At the moment there are for sure good bands but we still don’t know them.

Joshua BTS: Apart from your musical endeavors- Do any of your members dabble in any other arts? 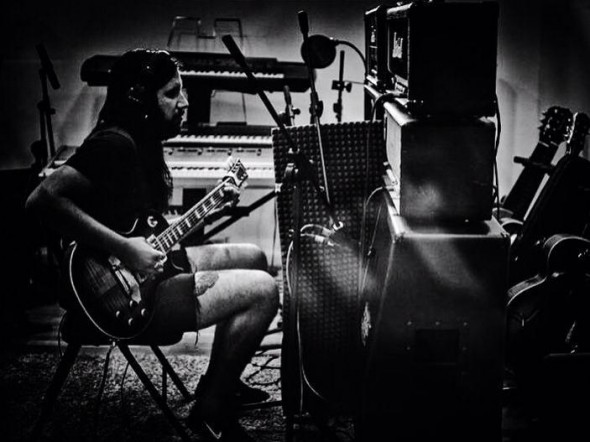 Joshua BTS: When you are not busy with Hierophant– How do you spend your time?

Lorenzo & Steve: I (Lorenzo) play tennis full time. Steve likes to sit on the couch, listen to Beatles vinyls, have a cup of tea and relax.

Joshua BTS: What does Hierophant have slated as we head into 2015? Tour dates? More recordings? Any surprises?

Lorenzo & Steve: Promoting ‘Peste’ playing as much as we can all over the world. No surprises yet.

Joshua BTS: Thank you kindly for taking a few moments with Blow The Scene readers from around the World as we look forward to keeping up with the band.. Any final thoughts before we sign off?

Pre-order Peste now at Bridge 9.
Check out Hierophant on Tour in Europe this Winter.