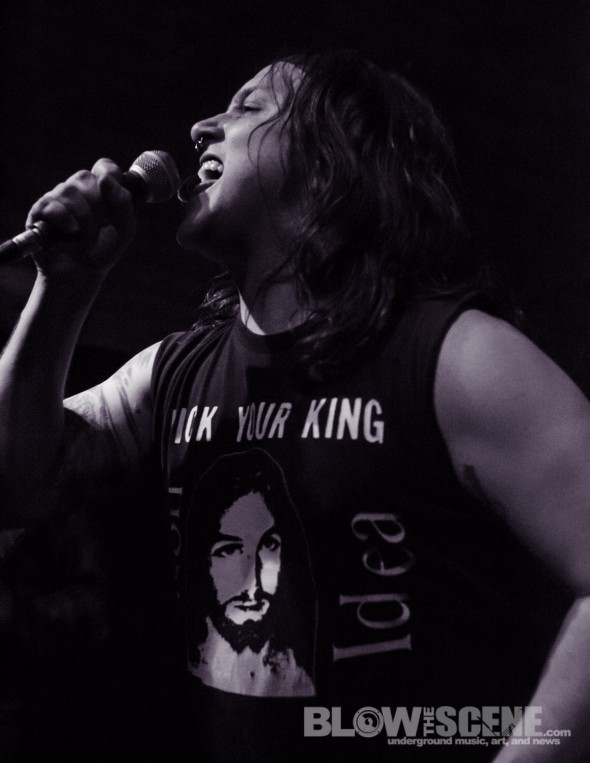 We are very excited to offer Blow The Scene readers around the world an exclusive interview with Richmond hardcore thrashers, Iron Reagan plus a new song stream of the opening track “Drop the Gun” from the band’s forthcoming debut LP on A389 Recordings and Magic Bullet coming March 20th. The band, which features Tony Foresta (vocals) and Phil “LandPhil” Hall (guitar)of Municipal Waste and ex Darkest Hour members Paul Burnette (bass) and Ryan Parish (drums) has been ripping up venues on current US Tour with Vektor.

We recently caught up with singer Tony Foresta and drummer Ryan Parish for a few words with exclusive pictures by BTS Senior Photographer, Dante Torrieri taken during the band’s stop through Philly last week at the Kung Fu Necktie venue. Full gallery is coming next week, so until then enjoy this exclusive interview and song stream below the fold. 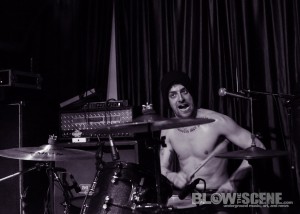 Joshua BTS: Greetings! Thank you for taking a few minutes with Blow The Scene readers from around the world. Let’s kick off this interview and premiere by having you introduce yourselves and your musical weapon of choice with Richmond’s practitioners of hardcore thrash, Iron Reagan.

Joshua BTS: Iron Reagan is set to release a debut LP, Worse Than Dead, on March 20 via A389 Recordings. Give us the 411 on the writing process- When did you start writing the LP? And when and where did recording sessions take place?

Ryan Parrish: The writing process was fast paced and challenging. We wanted the songs to be as organic and powerful as possible, so, we tried to not over-think it very much as we wrote. As soon as we had something we were stoked on, we moved on to the next song.

Tony Foresta: We shared duties a lot with the lyric writing. As to avoid the light hearted kind of stuff that I usually write about. It worked. I think this album comes across very honest and angry.

Joshua BTS: Do you consciously try to approach the writing process in a different frame of mind to differentiate this project from your already prolific work with Municipal Waste, Cannabis Corpse, and Darkest Hour?

Ryan Parrish: I absolutely do. I’m trying to annihilate the drums instead of
being super technical. Full steam!

Tony Foresta: Yeah the last thing I want is this band to be Waste Jr or anything like that. We try to keep it different creative and fast without sounding like our other projects. It will always get comparisons to the Waste due to the way my voice sounds but once people listen there is a big difference. 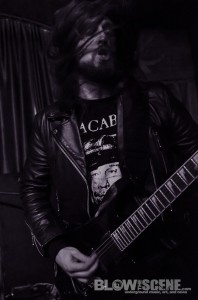 Tony Foresta: Dom has a great label I always wanted to work with him because I knew he was a good guy and in it for all the right reasons. Once we finished this record and listened to it I had to send it his way. It just seemed like the right kind of band for A389. I’m really glad he
wanted to work with us.

Ryan Parrish: The show was fucking killer too! Left For Dead ripped the shit outta that place.

Tony Foresta: Yeah I’m really bummed I missed Despise You though. Love them!

Joshua BTS: How did you come up with band name and does this correlate with any lyrical motifs on Worse Than Dead?

Tony Foresta: For the past few years I’ve been day dreaming of starting a new
pissed off metal/punk band. To me Iron Reagan was the perfect name for it. I’ve been sitting on that name for a couple years before we used it.

Joshua BTS: Who was worse- Reagan or Bush II?

Tony Foresta: For me Bush 2 because I was a lot more aware of what was happening
at the time he was president. When Reagan was president I was watching Muppet Babies and shit.

Ryan Parrish: That’s like asking who was worse – Hitler or Satan…

Ryan Parrish: Reagan would. He’s got a haircut that doesn’t quit. 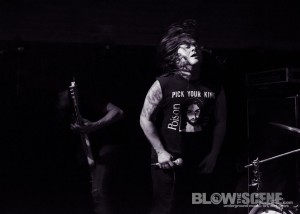 Joshua BTS: You have several fun tour dates scheduled in the coming weeks. Any stops you are particularly looking forward to?

Tony Foresta: I’m so stoked to play with the Cro-Mags in Maryland. One of my all
time favorite bands!

Joshua BTS: Tell us specifically about the opening track to Worse Than Dead, “Drop The Gun,” which is streaming exclusively below- Who orchestrated the music and can you tell us about what inspired the song title and lyrics? Why did you choose this track for the opener?

Ryan Parrish: We all had a hand in the development of that one. Phil wrote most
of it and Dr. Guitar has a riff in there, too. Tony killed it with the lyrics…I yelled the “1,2,3,4” at the beginning. Fun fact; my little tidbit at the beginning there was actually recorded in Dallas, TX
while I was on tour with Smoke Or Fire in the bathroom of a Coyote Ugly. It was sick.

Tony Foresta: I never go to protests but there was some serious bullshit going down last year with Virginia Legislature trying to pass two really insane bills that pretty much denied women in Virginia their reproductive rights. It was pretty crazy. The protest I was at was on the states capitol and had 31 women arrested and carried off to jail during a peaceful protest. One of those police officers that was hog tying and carrying some of these women away was also herself a women. I was pretty shocked that someone could do something like that. Did she even know that these women were standing up for her! So yeah that’s what that song is about. 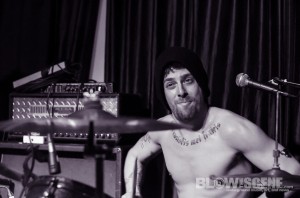 Joshua BTS: What is coming down the pipeline for Iron Reagan in 2013?

Ryan Parrish: Hopefully more shows and more releases. We don’t plan on letting up on either front.

Tony Foresta: We just finished recording for the Tankcrimes flexi series and we have a couple of cool splits in the works. Lots of good stuff on the horizon!

Joshua BTS: We really appreciate you taking a few minutes with Blow The Scene readers from around the world and dropping the stream with us! Any final thoughts?

Ryan Parrish: Thanks for the interview! Support your local scene and pick up Worse Than Dead when it comes out! Thanks again!

Tony Foresta: Yeah thanks a ton! 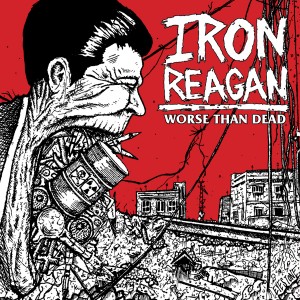