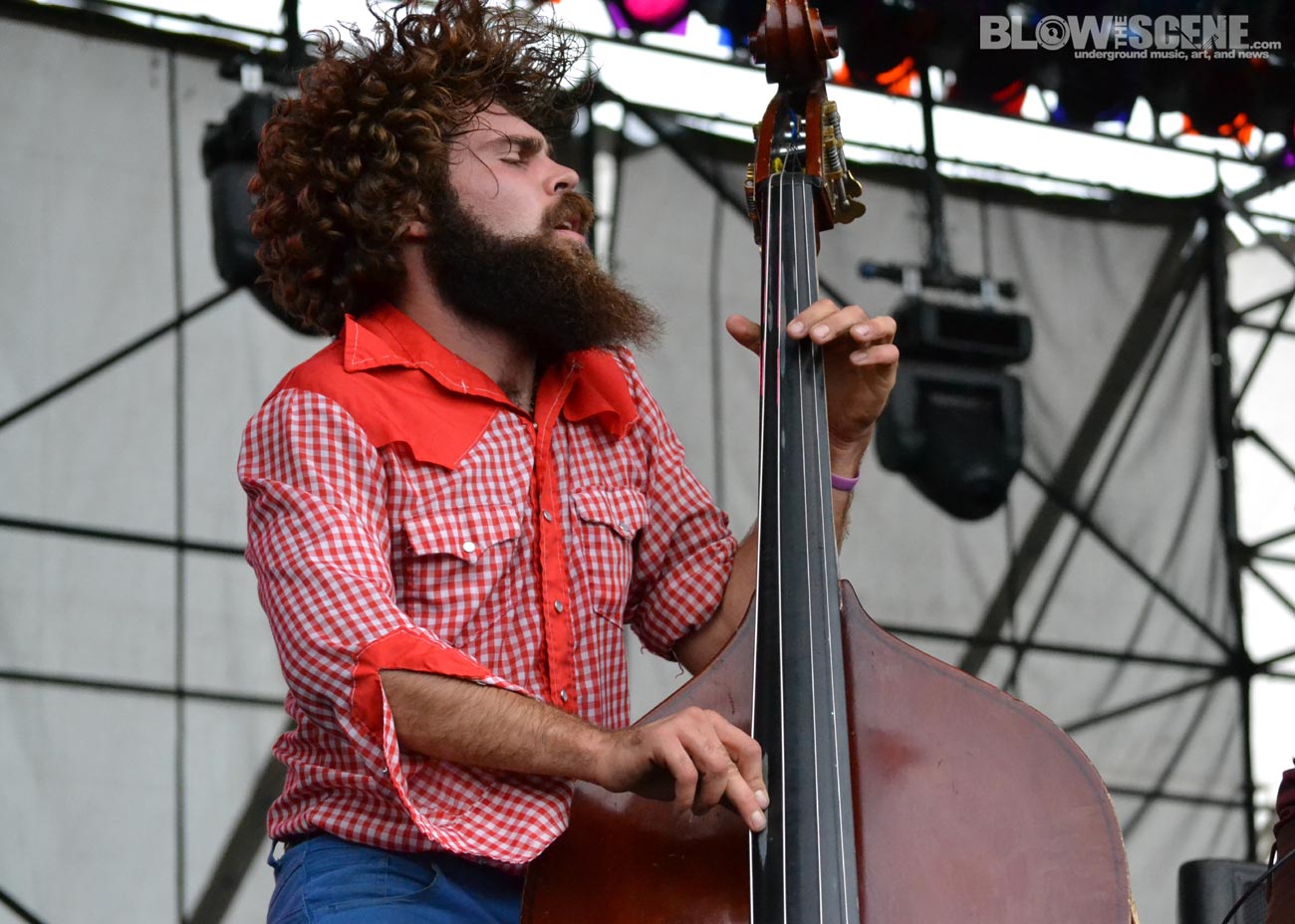 We recently sat down with vocalist/double bassist Jeshua Marshall of the up-and-coming, punk-infused, six-piece, bluesy-folk-rock band Larry and His Flask. What started as a 3-piece punk band formed by brothers Jeshua and Jamin Marshall in 2003, has become a highly-refined and deviously energetic touring juggernaut. The band is currently basking in the glow of rising success with numerous US Tours and recent performances at several Riot Fests alongside scores of punk rock legends, including The Descendents, X, and Hot Water Music.

Larry and His Flask even hipped The New York Times to their otherworldly live performances where one of the nation’s most prestigious newspapers stated, “The bruising came hard and fast here: Jamin Marshall standing on his drum kit and hovering over the crowd; his brother Jeshua handling his upright bass like a slippery fish, tossing it around recklessly but never losing control.. Add in the anti-establishment streak in the lyrics sung largely by Mr. Cook — and the cover of Marvin Gaye’s “What’s Going On” slipped into “Flags and Concrete” — and it made for a breathless, polymorphous good time.”

We catch up with Larry and His Flask just after the unfortuante announcement of the band’s sudden departure from their nationwide tour with Lionize, as “a very close family member has taken ill back home in Oregon.” In this interview, Jeshua Marshall shares some history behind Larry and His Flask as well as musical influences and current band picks, upcoming tour plans, current song-writing processes, and much more. Without further ado, let’s here from Jeshua.

Joshua BTS: Greetings! Thank you kindly for taking a few minutes with Blow The Scene readers from around the world. Let’s begin by having you introduce yourselves and declare your onstage weapons of choice with Oregon’s eclectic, folk-punk-jamboree, Larry and His Flask .

Jeshua Marshall: Hey! Thanks hollering at us! My name is Jeshua Marshall. I play the Double bass and occasionally the harmonica and baritone horn. 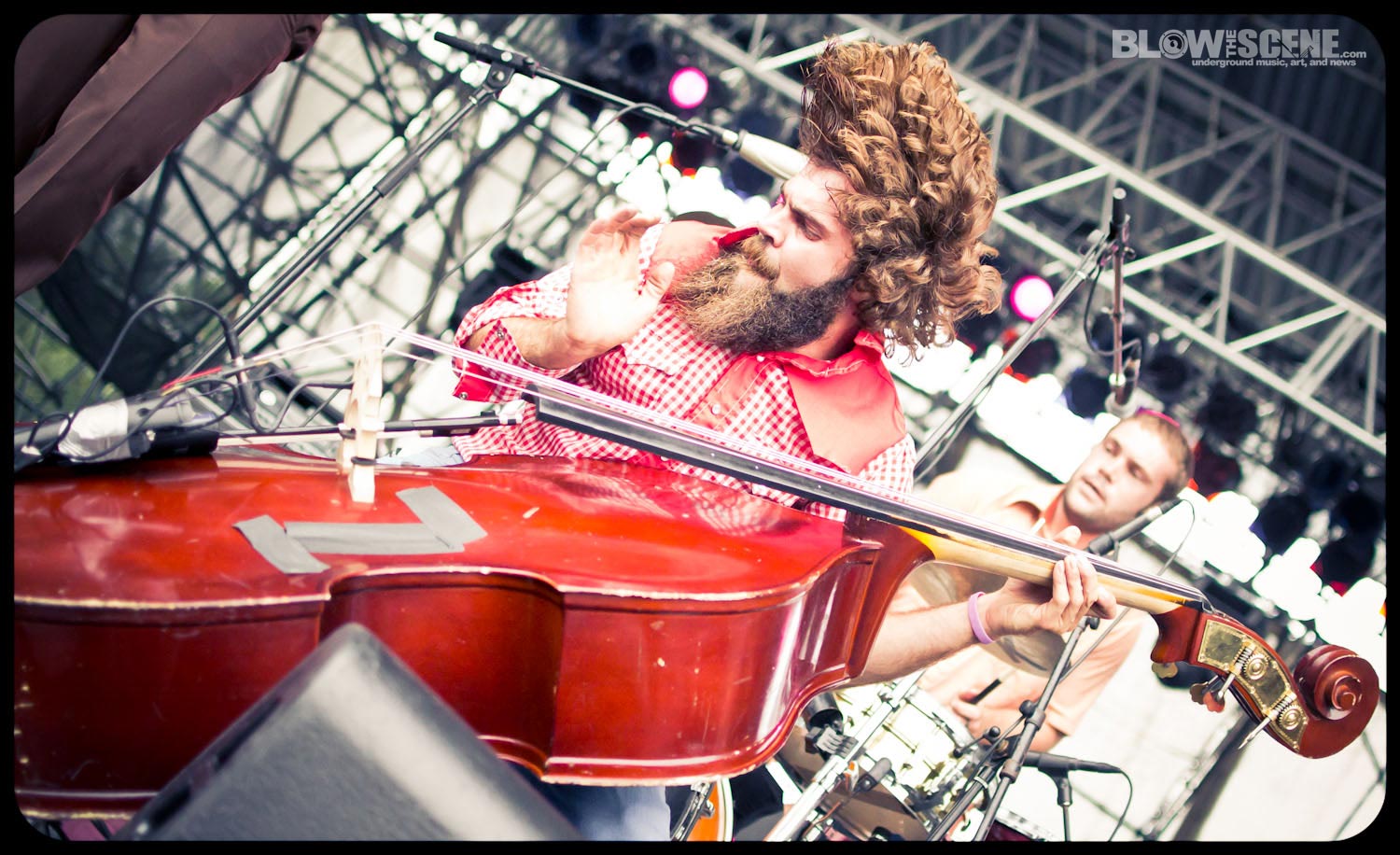 Joshua BTS: You got your start in Oregon in 2003 as a punk rock trio- How did Larry and His Flask evolve into the 6-member, folk-tinged, rock n’ roll, hillbilly-jamboree that it is today? Was this a conscious decision or something that happened organically?

Jeshua Marshall: Well, it was defiantly an organic evolution. We have always been way into many different styles of music and especially influenced by american roots music. We were always writing music on acoustic guitars with a huge folk and bluegrass influence on our writing. After our drummer of the punk version of the band quit, we started focusing on our acoustic songs and invited a bunch of friends to join the circle with us. After a little rehearsal in our living room, we took it to the street corners and here we are now.

Joshua BTS: We caught Larry and His Flask at Riot Fest East in Philadelphia last month and must say- Out of the 30+ bands on the roster; you guys were a definite standout. Awesomely energetic performance and I’ve never seen a stand-up bass player thrash around so much! It seems you’ve been able to retain the punk rock energy behind a sound that is more accessible and far reaching. How do you currently approach your song-writing? Do you have live interpretations in mind when you are at the drawing board with new material?

Jeshua Marshall: We are home for a little while and finally have time to do some long needed work on some songs that have been waiting idly by for our attention. Generally a lot of the time one of us, mainly Ian will write an entire song then bring it to the band. We will get together in some one’s living room or where ever we have to meet at that time and start learning the song. All of us add ideas and the boys write their vocal harmonies. After most of us are good and comfortable with the music we will take it to the practice spot and add some grit to it. Once it’s to that point, we will take it to the stage and that’s when we really learn and understand the song.

Joshua BTS: I understand you were forced to cancel much of your current tour with Lionize because a family member of the band is deeply entrenched with a battle with cancer. Our thoughts and hopes are with you here at BTS. Having covered music on a global level for many years, it is unfortunate to say that this is not uncommon. What role do you see the music community playing in cancer awareness? Or even direct action against companies who continue to poison air, food, soil, and water with cancer causing pollutants in the name of profits?

Jeshua Marshall: I think that music has always and will always be an important platform for activism and getting awareness out to the public. Cancer is an horrible epidemic that effects everyone in one form or another. We have a song our drummer Jamin wrote when he went through his battle with testicular cancer. Its called “My name is cancer” we will be releasing it this spring on a new EP. We always to do our part in getting awareness out to people of our experiences. There needs to be huge change in the way we live or it is going to destroy us all. The most important thing you can do is be there for the ones who need your help. 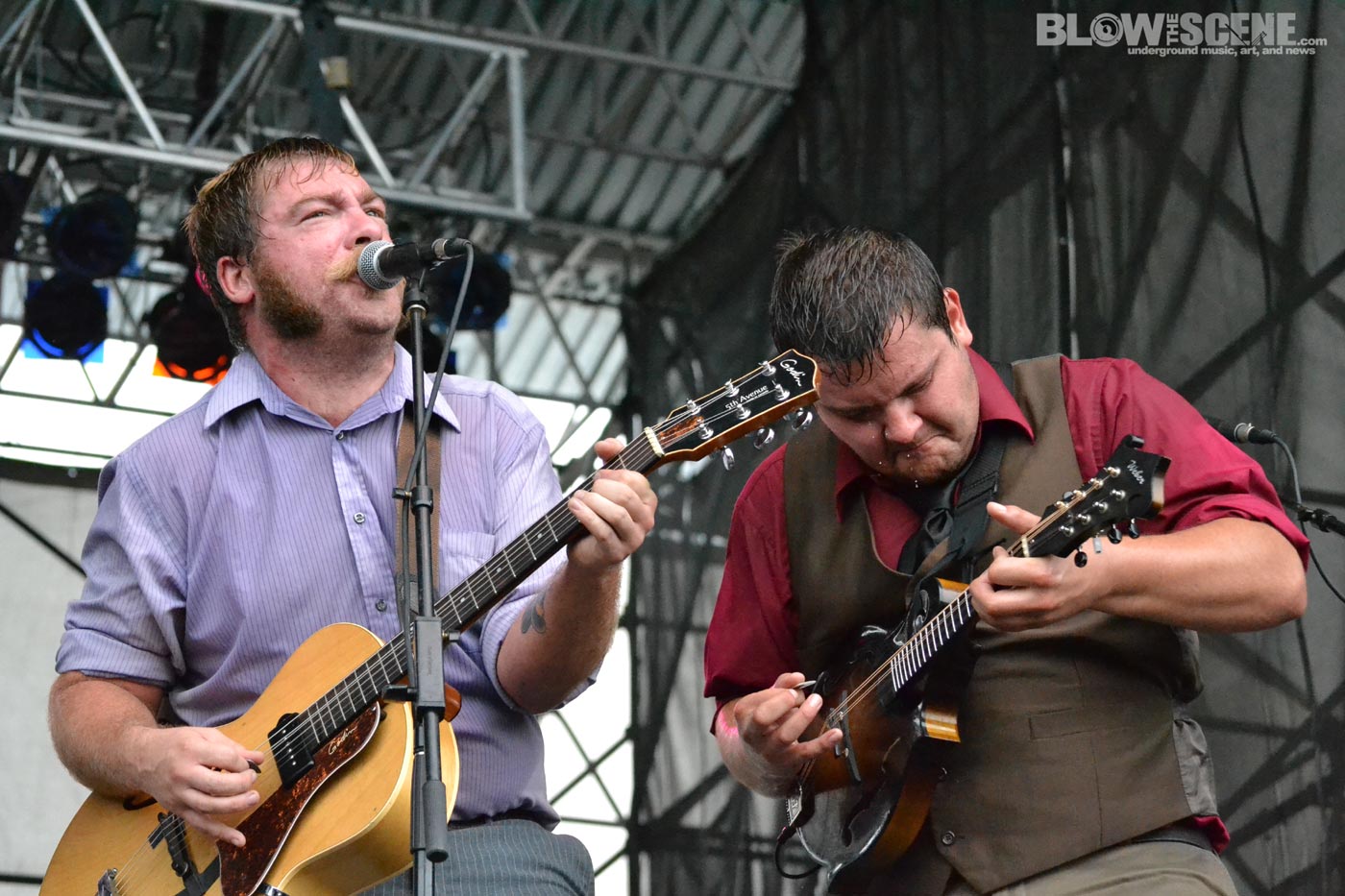 Joshua BTS: Silver Sprocket Bicycle Club, for those that don’t know, is actually a record label that picked up where Springman Records left off and is actively involved in music, art, and helping progress social change in their local community of San Francisco. How did you come to link up with Silver Sprocket? And was this community presence a deciding factor in your decision to release through them?

Jeshua Marshall: We met Avi while playing in San Francisco a few years ago and got along with him right away. He opened his doors to us and let us play a show in his house and we became good friends and are stoked to be working with him. We defiantly put serious thought and consideration in to who we choose to work with. We don’t like to work with anybody who is concerned more with profit than the over all community, we are all trying to help make this world a better and fun place for every one.

Joshua BTS: Larry and His Flask keep up a fairly relentless touring pace. I imagine with six dudes in the band things can get a little cramped. Who amongst you has the oddest touring habits? And do share- We are always down for a disgusting story or two!

Jeshua Marshall: Haha, I am sure we all have our own strange habits that weird each other out quite regularly. I won’t embarrass anybody here.

Joshua BTS: I know you must get this a lot, but for our readers just tuning into Larry and His Flask– How did you land on this band name?

Jeshua Marshall: It came from an idea Jamin (my brother) and I came up with years ago when we first started playing music together. We had an idea for an outlaw country band and were going to call it Jimmy and His Flask. Jimmy never really went any where, a couple more years passed. Jamin was working as a janitor at a elementary school and on a drunken halloween evening his alter ego “Larry” was born. We added a guitarist and switched “Jimmy” to “Larry” and have been Larry And His Flask ever since.

Joshua BTS: When you are not touring or active with Larry and His Flask– What do your daily lives look like?

Jeshua Marshall: As of now, for me I spend the day hanging out with my family and try to help take care of my sick father. I spend a lot of time just playing music, listening to music, reading, riding bikes, hanging out and trying not to lose my mind in a tiny town.

Joshua BTS: Do you all split up lyrical contributions for the records? And what are some of the current motifs listeners will find on your latest LP- All That We Know? 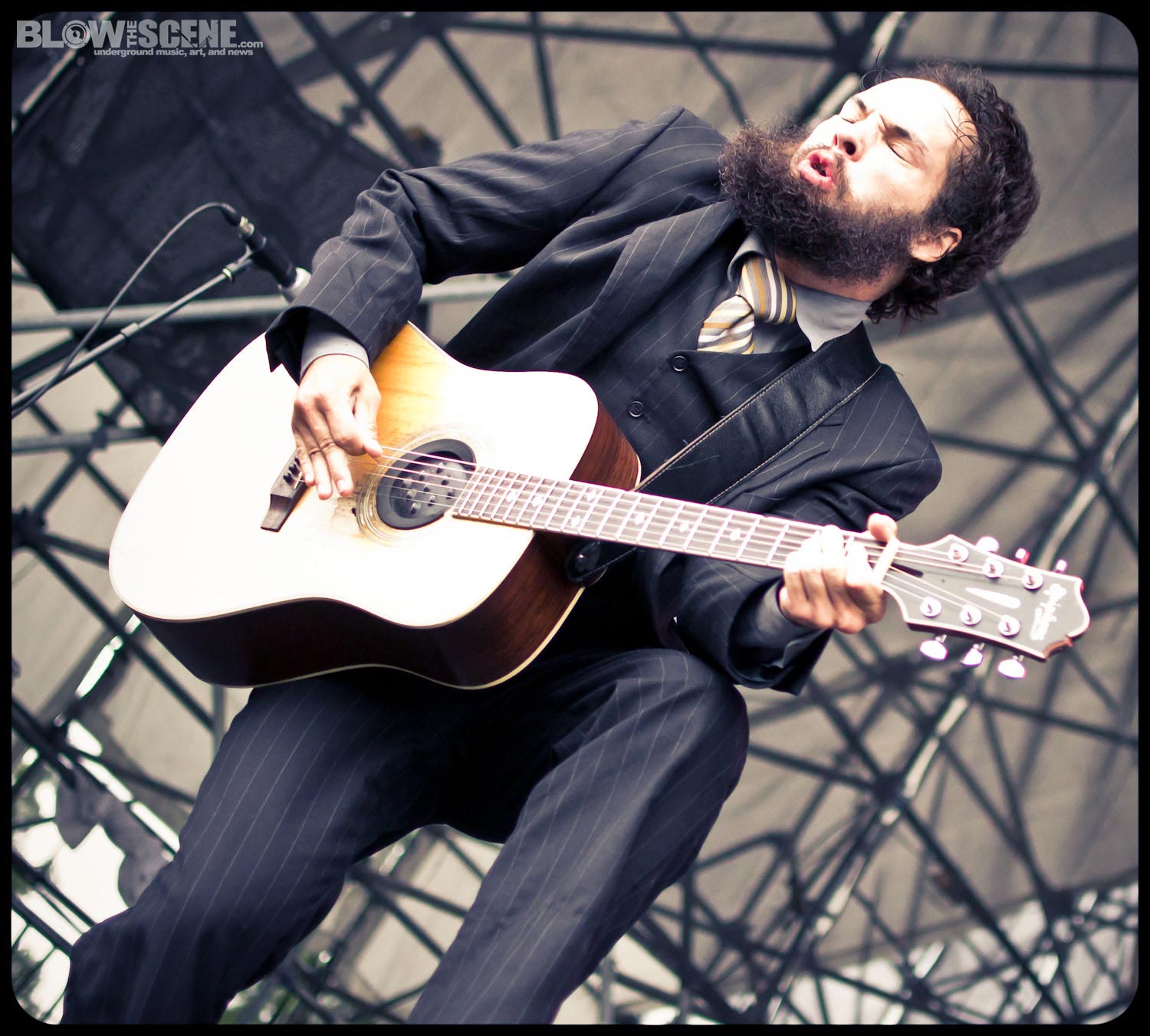 Joshua BTS: It would appear there are some definite political undertones in your lyrics. Are you politically active? And if so- Any grassroots organizes or causes that you are supporting that you feel more people should check out?

Jeshua Marshall: None of us subscribe to a political party or even vote. We all have our own views on the world and what needs to be changed. Check out Rise Up International. They are a non profit clothing company out of Bend, Oregon. We work with them a lot.

Joshua BTS: Who are some of your immediate influences?

Joshua BTS: Any current bands out there right now that are really exciting you guys?

Joshua BTS: As we head into 2012- What can we expect from Larry and His Flask?

Jeshua Marshall: We will be recording a new EP that will be out in the early spring. Lots of touring, including shows in Hawaii, Alaska, every state and province in-between. In the early spring, we head out on a support tour for Reverend Horton Heat.

Joshua BTS: Thank you kindly for taking time with Blow The Scene readers today as we look forward to keeping up with your future endeavors. Any final thoughts?

Jeshua Marshall: Stay positive and keep the dirty side down.

Larry And His Flask– “Call It What You Will”

For More Info: Go to the Official Larry and His Flask Website.