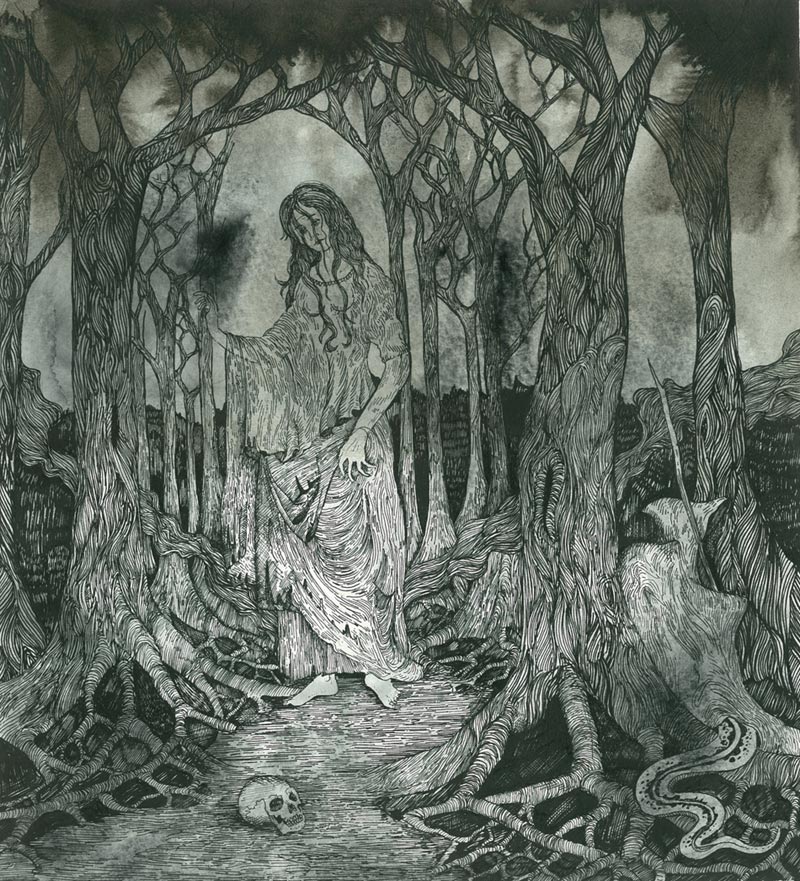 Split records have become synonymous with punk-style releases for decades and France’s independently run, Throatruinner Records has been offering some intriguing 2 and 3 band-combos as of late. What makes a good split? Should both bands sound the same? Should they be vastly different? Personally, I like a split with some variety. If I am married to a particular sound, then I will buy a standard full-length. I enjoy the duality of split that perks several areas of my aural perception. This brings me to the resent split between Orléans, France’s Nesseria and Denver, Colorado’s Clinging To The Trees Of A Forest Fire.

Clinging to the Trees of a Forest Fire sit somewhere between the blackened grindcore and filthy sludge that fans of Today Is The Day, Robinson, Admiral Angry, and Khanate should find intriguing. Then we have Orléans, France’s Nesseria who offer a dirty metallic sound that draws from schools ranging from black metal to crust. We caught up Nesseria and CTTTOAFF for a split interview, as the bands discuss their current split and share insight from their perspective corners of the globe. Be sure to check out a streaming copy of the split below with a link to purchase from Throatruiner Records.

Joshua BTS: Greetings! Thank you for taking time to answer a few questions for Blow The Scene readers around the World! Let’s begin by having you introduce yourself and declare your onstage weapon of choice with Denver’s blackened sludge practitioners, Clinging to the Trees of a Forest Fire and France’s noisy metallic-punk outfit, Nesseria.

CTTTOAFF: I am Ethan from CTTTOAFF and I play Guitar and vocals.

Nesseria: We’re Nesseria, from Orleans, France. We began playing music together, mainly to do something out of teenage angst. Jerôme joined us later, and Adrien is the latest addition to the lineup. We’re not actually trying to mime any scene or sub-genre, but we always made of sincerity and intensity our main goal and purpose. This naturally lead us to the road. So we’ve toured as much as life let us do, mainly in foreign countries (whole europe, japan, canada…). 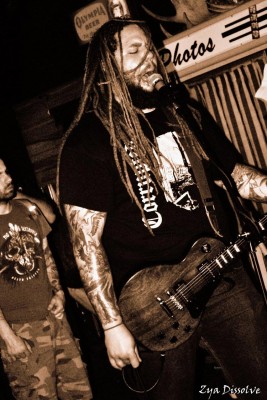 Joshua BTS: Nesseria and Clinging to the Trees if a Forest Fire just dropped a new split on Throatruinner Records. Give us the 411 on this recording. Where, when, and whom did you record this split with?

CTTTOAFF: We recorded all of our songs for the split with Nesseria with Dave Otero from Flatline Audio in what I believe to be March or May of 2011. It is hard for me to remember because we went into the studio two different times this year.

Nesseria: We recorded our tracks late may at Drudenhaus Studios, on the french west coast. Neb, recorded our stuff. We worked together for our album, and for a couple of splits, he’s a friend. Plus he’s very involved in what he’s doing, so our choice was quite obvious.

Joshua BTS: How were the two bands introduced?

CTTTOAFF: I had heard Nesseria’s self-titled record about a month before Matthias from Throatruiner approached us about doing a split with them. It’s funny because I had thrown around the idea of asking them after hearing their record for the first time. So I guess the stars aligned for that one.

Nesseria: We’ve heard about Clinging before, and appreciated their stuff. Matthias, the great guy running one of the labels supporting us (Throatruiner Rds), was in touch with them. So he’s definitely the one to blame here.

CTTTOAFF: We originally went into the studio and recorded all of those songs that ended up on our Ep that just came out on Prosthetic called “Visceral.” Those songs were originally intended to be on the split release with Nesseria, but some complications came about and we ended up putting those songs out on a 10” and then writing 2 new songs (Opaque and Wrinkled Claws) for the split. The song “Lower than life, high as the sky” is on both releases and then we recorded the cover song (S.I.T.W.)as well.

Nesseria: Clinging already had material. We decided to write and record ours to cope to this opportunity. We need this kind of pressure to make our schedule work.

Joshua BTS: One for the gear nerds- What do your rigs look like? Any pieces of equipment that you feel is especially pivotal in capturing your perspective sounds?

CTTTOAFF: I play through a Mesa Boogie dual rectifier roadster model, a mesa 2X12 cabinet and an avatar 4X12. I sometimes substitute the Mesa 2X12 for a Marshall 4X12 but I’m looking to change that set up a little bit. Maybe to another Mesa or avatar 4X12. I alternate between a Gibson Les Paul studio and a Gibson SG. I tend to use the Les Paul a lot more though. Jp plays through Pearl drums but I’m not exactly sure the specs on those. He uses some Meinl cymbals and Ziljdan as well. Harlan uses Ampeg heads and cabs. He is currently going through a “transistional period” with his gear so the type will change. I do know that he plays through a 6X10 and a 10X10.

Nesseria: We’re the kind of unlucky gear nerds that got a guitar stolen right before leaving home for the studio. We finally found that guy, and of course cops did nothing.

To sum it up, we’d be far geekier if we had the money – here in Europe it’s very expensive – anyway what we have’s pretty decent. No crazy chops, just classical stuff, you know the whole 5150-fender-gibson-ampeg-musicman classics. But if I were bloody rich I’d buy that glowing axe-shaped bass from the Kiss guy and this rotating cage Tommy Lee uses for the drums. 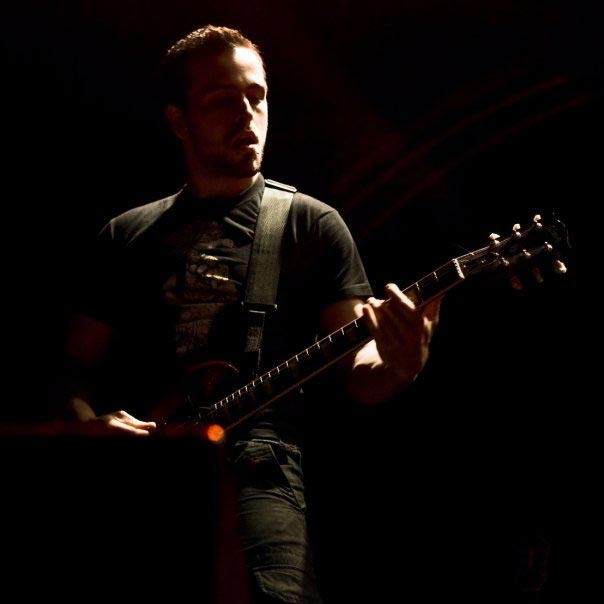 Joshua BTS: What are some of the lyrical focuses listeners will find throughout the split?

Nesseria: Lyrics are a major concern for us, but for the spontaneity’s sake, we’re writing in french. So, for those who don’t read french, we wrote some notes we joined to the lyrics. As I’m a lazy fuck here they are :

Freistadt : We once crossed the border in the mountains between Czech Republic and Austria. The weather was heavy and cold, so foggy we couldn’t see 10 meters away. As we were frozen and silent, driving through the awfully sinuous road, female silhouettes popped in our headlights, waving on the roadside. Like appearing from the purgatory, almost naked, in this biting cold. Evidently, there would be no hope or savior for them, and nobody would ever stop, except those who consume their bodies.

Fils de la fin de siècle : The situation of our societies felt into a painful paradox : work has been raised to the highest value ; but at the same time youth is being deprived of employability. Subsequently, frustration and guilt make us beggars and prostitutes, ready for anything. But ironically enough, this form of control/castration destroys the system itself, as the products it vomits everyday doesn’t find consumers anymore.

1789 : Worldwide, french revolution is perceived as the uprising of the the poorest against monarchs and wealthy tyrants. But historical reality is quite different, as the Revolution was actually led by the bourgeoisie against the nobility, immediately followed by the brutal repression of the Terror regime.While French people fool themselves with the illusion of being a rebellious people, they submit more and more to the bourgeoisie, comforted by this national myth.

Joshua BTS: With Nesseria being based in France and CTTTOAFF stationed in Denver, Colorado- do you foresee any tours together?

CTTTOAFF: There has been talk of this happening. Maybe next summer? We sure hope so.

Nesseria: Hopefully yes indeed. Them here, or us there, that would be great anyway. And expensive too, that’s why we didn’t made it already, but I’m not done selling cocaine and black market organs.

Joshua BTS: Who crafted the artwork for your split record and what is the significance of the Art?

CTTTOAFF: This dude named Sin-Eater from the UK. The Cover is based on some of Nesseria’s ideas. They met him and kind of went with that concept. I like the theme of hopelessness it portrays.

Nesseria: Sin-Eater, an english guy. His work’s based on Freistadt lyrics, and on a larger scale it represents the bleak misery of human exploitation. 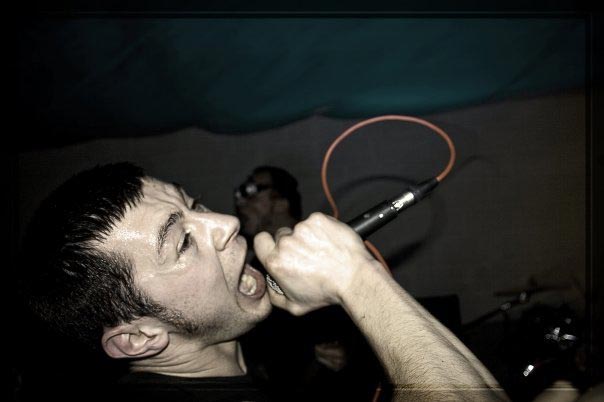 Joshua BTS: What are your primary influences, both musically and emotionally?

CTTTOAFF: There are too many bands to list that influence us. It spans a lot of genres. Emotionally it has always been things that are very negative. Things that you don’t tend to talk about to other people about in “real life.”

Nesseria: Each of us is listening to so many different things I couldn’t really give you a name, really. But as long as we’re sharing energy, anger and a certain vision of aggressive music, I know it will hold all these influences together. There’s so much things to get mad at nowadays I can’t really understand those nice, happy smug artists.

Joshua BTS: When you are not busy with Nesseria and CTTTOAFF– What do your daily lives look like?

CTTTOAFF: I am a school Teacher and book a lot of shows in Denver, JP is an airplane mechanic, and Harlan is a bartender and screen prints.

Nesseria: We’re regular guys in regular jobs – or no jobs at all – nothing extraordinary. Maybe that’s why we need to escape sometimes. Nothing to really complain about, imagine white 25/30-ish guys in a small town and you’ll get it right.

Joshua BTS: How is the remainder of 2011 looking for both bands? Any more releases or tours in the works?

CTTTOAFF: We are going to be writing material for a full length record most of the rest of this year. A few short tour runs have been discussed but nothing concrete.

Nesseria: I don’t think we’ll record some more material, but we’ll write brand new for sure. And in October, we’re going for a two weeks tour around Europe (from Germany to Spain, through western Europe and France). We’re really looking forward to it, as you can imagine. European readers : come or die.

Joshua BTS: Where is the best place for fans to keep up with you online?

Joshua BTS: Thank you for taking a few moments with Blow The Scene readers today. Any final thoughts?

CTTTOAFF: Thank you for the interview! FUNERALGRINDCORE IS FUCKING WAR.

Nesseria: Thanks for your attention and time. Fuck everyone else.