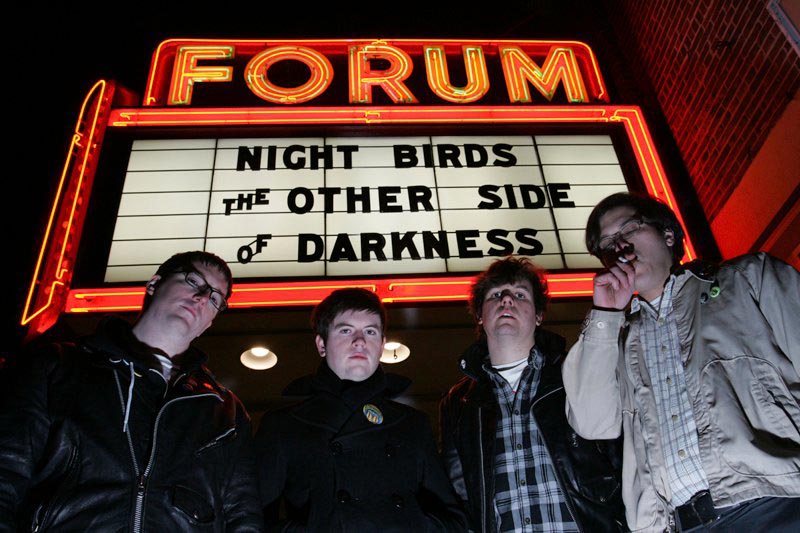 Brooklyn’s Night Birds have been making waves with their latest LP on Grave Mistake Records, The Other Side of Darkness, as the band fuses the best elements of surf rock and garage punk into an engaging amalgamation of poignant and catchy tunes that appeal to a wide spectrum of music lovers. It is not uncommon to see the band thrown on bills with hard hitting street punk bands or melodic indie bands, as the group’s signature sound draws from a wide range of rock and punk history that appeals to an eclectic array of music lovers.

We recently featured Night Birds in our Review Rundown Series and decided to hit up the guys up for interview, as the band is just returning from a successful European tour run. In this interview, singer Brian Gorsegner and bassist Joe Keller share an inside look into the band’s formation, musical development, lyrical motifs, tour life, and much more.

Below the interview, you will find a streaming sample of The Other Side of Darkness, and we encourage you to head on over to Night Bird’s bandcamp profile and snag the album if you dig what you hear. 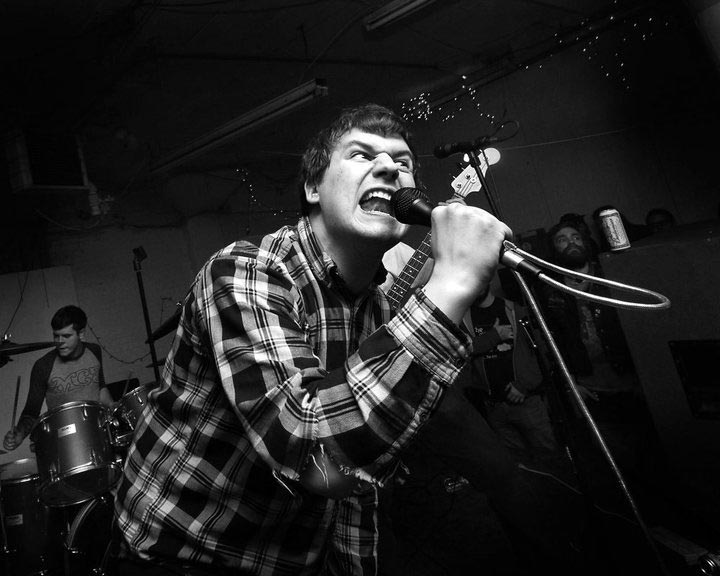 Joshua BTS: Greetings. Thank you for taking time with Blow The Scene readers from around the world today. Let’s begin by having you introduce yourselves and declare your weapons of choice with Brooklyn’s infectious practitioners of surf-tinged garage punk- Night Birds.

Joshua BTS: You recently released your latest and debut full-length, The Other Side of Darkness on Grave Mistake Records. Give us the skinny on this record. Where, when, and whom did you record with?

Brian: We recorded with long time friend Chris Pierce at Technical Ecstasy Studios near New Brunswick, NJ. We recorded all analog, then did digital dumps of it and Mike mixed it with our buddy Darren who does all of our mastering. We started the process in February and it was all done when we got home from our Midwest tour in May, just in time for us to go to Europe in September.

Joshua BTS: You are able to capture one of the more authentic surf rock tones with an awesomely eerie edge. East Bay Ray’s early work with Dead Kennedys certainly comes to mind. I can also hear some of The Adolescents influence in there. Any special or rare pieces of equipment that you work into your rigs to help capture your overall sound? Any special recording techniques in the studio to capture this sound?

Brian: We were going to keep this top secret, but since you asked, Mike uses the DOD Punkifier and turns the “spikes” and “slam” up all the way while setting “punk” and “menace” at about 12 o’clock.

Joshua BTS: Who are some of your immediate influences?

Joshua BTS: Please get us up to speed on the formation of Night Birds. How did you all come to start making music together?

Brian: Joe and I were doing bands that were both coming to an end and I asked him to start a punk band with me. I was gonna play drums and we asked a couple guys who had played in a New Jersey band called The Degenerics if they wanted to play with us. That’s how it got started… The band sort of seemed to be on two different pages so we parted ways and we asked Chris to play drums and Mike to play guitar. That’s the lineup that recorded the demo, the s/t 7″ on Dirtnap / Grave Mistake, and the Killer Waves EP on Art of the Underground. Shortly after Chris quit to go to stuntman school and we got Ryan McHale on drums. 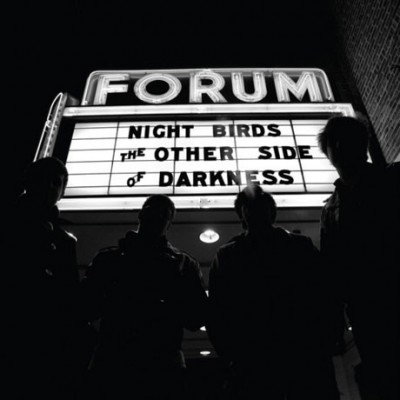 Joshua BTS: How did you come to link up with Grave Mistake Records? Any release prospects coming down the pipeline?

Brian: I liked GM a lot and bought a bunch of Alex’s releases, so when one of my old bands recorded I sent him a copy to see if he’d release it. He turned it down telling me that he likes to only release records with bands whom he knows and is friends with a member or two, which at the time I thought was just an excuse… But that is sort of how we met, and we became friendly after that. I booked a few Government Warning shows and one of my old bands played with GW a lot. Alex also loved The Ergs and was friends with those guys, and I told Alex how The Ergs had recorded this great thrashy punk ep years before and how GM should put it out, so he did… shortly after I did a band with Mike from The Ergs called Psyched to Die… We sent the demo to Alex, he liked it, so he did our 7″… Pretty much the same with the Night Birds ep. He’s put out two records for Night Birds so far and will be doing the Night Birds / Terrible Feelings tour split 7″ in May.

Joshua BTS: You recently completed a European Tour run. Was it a positive experience for the band? Any shows or situations that were particularly memorable?

Brian: Yes, it was very positive. I kept waiting every night for that one show that was just bound to suck and be empty and no one give a fuck at all but it never came. 17 great shows. Our tours in the US aren’t like that, there’s always the one or two duds, which is fine and totally to be expected, but Europe was great. Played with lots of great bands, saw tons of cool stuff, made some new friends.

As far as memorable moment, Mike was running around the stage like a maniac in Tubingen, Germany and did not see a large monitor hiding in the shadows at the edge of the stage… Running full speed Mike trips on the monitor, falls off the stage (which was about a foot off the ground), and landed on his rib- on his guitar. He continued playing and never missed a beat. After the song, he got on stage telling me he thought he was badly hurt, which kind of freaked me out as Mike is always doing damage to his body, but I had never heard him confess pain. We wrap up the set and it seems like he’s feeling better as time is passing. We carry on with our night… Some head out to party, some call it a night and sleep upstairs. At some point the next morning, Mike sneezes and asks us to call a Doctor because he is sure there’s a serious problem. Our boy Thomas gets a doc on the phone and gets her to Epplehaus right away. She looks Mike over and tells him he needs to go to the hospital for scans and X Rays because if something is wrong with his spleen, like she thought, or an organ is bleeding out, he’d likely die in the air when our plane was headed home… The doctor was cool as hell, she gave him a fake name and gave him this whole fake story about being a German student in town and stuff. After a half a day spent in a German hospital Mike found out he had lucked out and only severely bruised his ribs, but was very lucky to not have broken them. I guess that’s not all that silly, at all really. 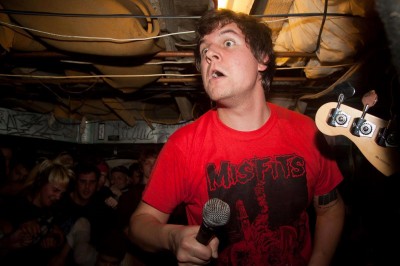 Joshua BTS: How would you compare your European shows to those in the US?

Brian: We got fed like kings in Europe… No one feeds us here! Aside from that, it’s fairly similar for the most part.

Joshua BTS: What are some lyrical themes listeners will find on The Other Side of Darkness? And what, if any significance does the album title have in relation to the lyrical motifs?

Brian: The title “The Other side of Darkness” was a Seinfeld reference and lots of our songs are about movies, books, television- shit like that.

Joshua BTS: When you are not busy with Night Birds- What do your daily lives look like?

Brian: I do lots of customer relations type stuff at Gorsegner Brothers Hardwood Floors which has been in my family for 60 years. People yell at me all day, 5 days a week, and then I go home at 5 to my wife and small apartment in Sayreville, NJ. I like collecting records and the NFL.

Joshua BTS: Who amongst you has the oddest touring habits? Any urine bottle collectors or adrenaline junkies to make those long drives a little more interesting?

Joe: Absolutely no urine bottles are allowed in the van. This is because if one were to spill, I’d inevitably have to clean it up since I own the van.

Brian: Yea that’s been Joe’s one band rule since day one. We have a gap between the back of the backseat in the van and this piece of plywood that stands up, making a coffin like space that Mike and Ryan like to take turns sleeping in on drives. We call it the hole. Aside from that, we listen to a lot of comedy stand up shit in the van and Mike reads comics and draws and stuff. 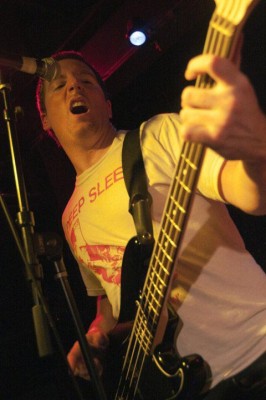 Joshua BTS: Any new bands out there that really have your attention right now?

Brian: I like those ones too, in addition I’ll add Terrible Feelings from Malmo, Sweden. Omegas from Canada, Steve Adamyk Band just did a great new LP, Big Eyes from Brooklyn and moved to Seattle, and I’ll add Loose Ends to cool NJ bands.

Joshua BTS: With members in Brooklyn I am sure you are aware of the Occupy Wall St. protests. What is your take on the protests? And are there any other grassroots organizations you have your eye on right now that you think more people should be aware of?

Joe: There are plenty of deadhead dummies hanging out at this thing playing hackey sack, ululating in their little drum circle, and in general are just there to look like they care, but overall, I think the group is protesting the right things. The 2008 housing market crashed was perpetrated by more than one entity, but Wall Street (i.e. financial services) played a big part. They’re back making serious bank while the rest of us are looking for jobs. Well, not me though. I have a job.

Joshua BTS:What is coming down the pipeline for Night Birds as we head into 2012?

Brian: Hopefully a lot. We played 60 shows and did 2 records this year. We wanna do the same next year, if not a little more. Oh yea, we’re going to Hawaii in July!

Joshua BTS: Thank you for answering a few questions for us as we look forward to keeping up with your future endeavors. Any final thoughts or plugs?

Brian: Nope, thanks for the interview.