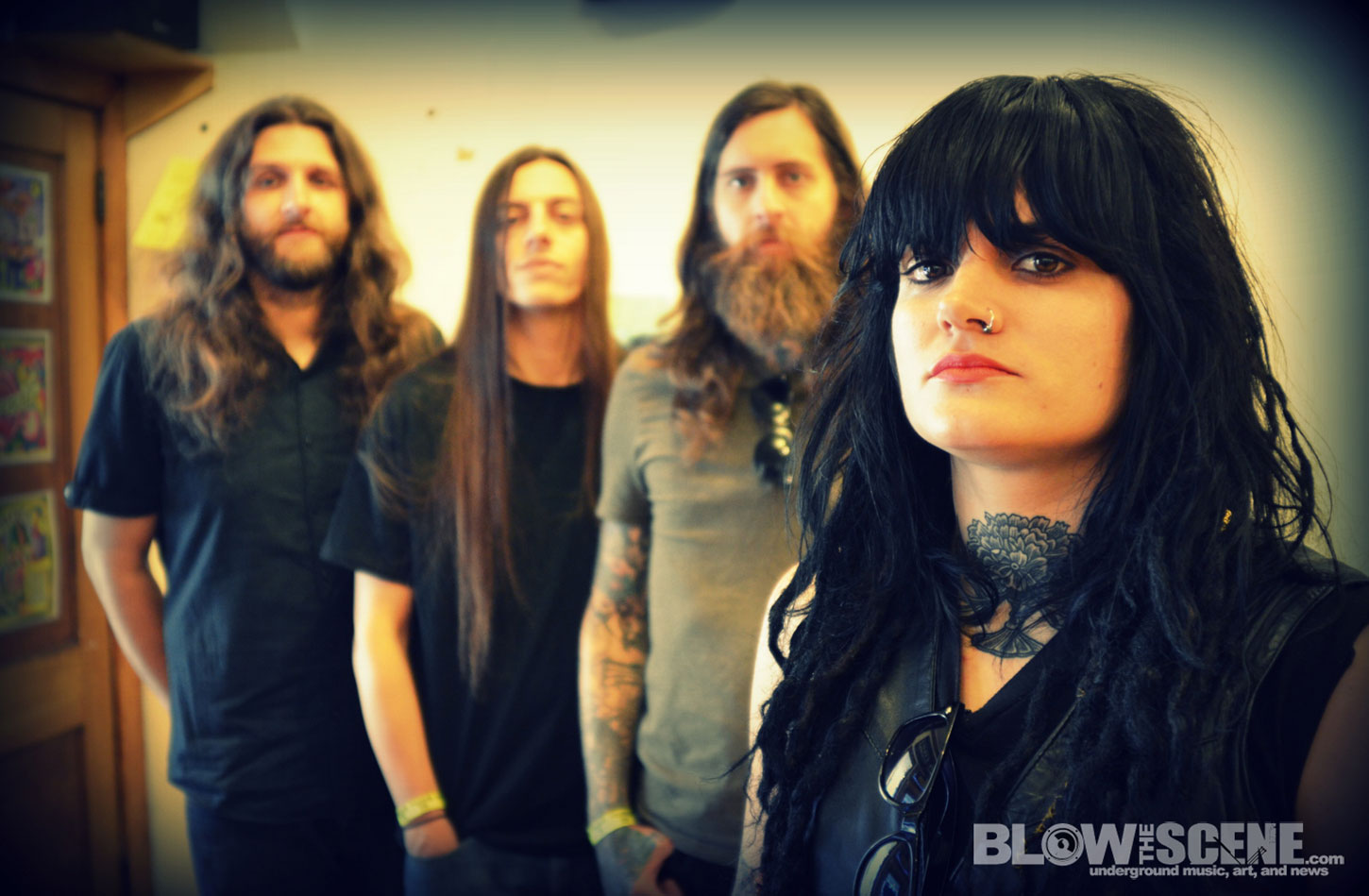 After waiting for the big payoff from Royal Thunder since its self-titled EP was reissued in late 2010, the Atlanta hard-rockers have finally delivered on their full potential. A year and a half ago, we at BTS channeled the Sultan of Swat and called the group’s forthcoming homerun, stating: “Get ready to bet it all on black when this band rolls into town because Royal Thunder is poised to strike gold in the New Year.”

CVI is that album. And, once again, it’s the outstanding pipes of frontwoman Mlny Parsonz, whose ever- seething glottal wail and silky coo make this collection of promising, bluesy, sepulchral-themed Southern metal jams fit for a macabre debutante ball worth revisiting again and again. In less flowery language – she can really fucking sing.

While we may not be the most accurate soothsayers since the album dropped in 2012 (May 22), not 2011 as initially predicted, it’s still gratifying to watch a band this talented take flight.

Since Relapse Records reissued Royal Thunder’s EP, the band lost a member, reunited with a former drummer and picked up an extra body along the way. The spouse/bandmate dynamic between vocalist/bassist Parsonz and lead guitarist Josh Weaver remains as electrifying as ever now backed by Lee Smith on drums and Josh Coleman on rhythm guitar. 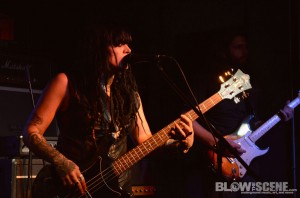 As the band grew in size, so did the accolades bestowed on it. SPIN magazine named Royal Thunder one of its five best new artists to watch in June 2012, NPR interviewed half the group for its “All Songs Considered” blog and Decibel magazine featured Parsonz on its inaugural “Women in Metal” issue. After speaking with the band in the dungeon-like green room of The Smiling Moose in Pittsburgh, it’s clear the members of Royal Thunder rightfully earned every badge by putting their noses to the grindstone both inside the studio and on stage.

“We didn’t cut any corners,” Weaver said, crediting engineer Joey Jones, of Aria Recording Studio in Marietta, Georgia, for sitting through long sessions to dial in the ideal mix of tones.

Smith said former drummer Jesse Stuber, who played all of the drum tracks on CVI with the exception of the last song, “Black Water Vision,” often pounded on the three or four drum kits in the studio to find the perfect thump.

“They really went off on the record production wise,” he said.

The result is a heavy album built on a foundation of smoky blues and metal swirled with psychedelic riffage, each track momentarily crawling like molasses, smothered in layer upon layer of guitar, before ascending alongside Parsonz’s moody, larger-than-life voice. It’s dark, charming, polished and beautiful.

CVI may have taken a little longer to craft than expected, but it’s clearly the product of hard work, as Parsonz put it: “We’d get off work, drive 45 minutes out to the suburbs, spend all fuckin’ day there, all fuckin’ night, drive home at like two o’clock in the morning, get up go to work and we did that like every single day.” 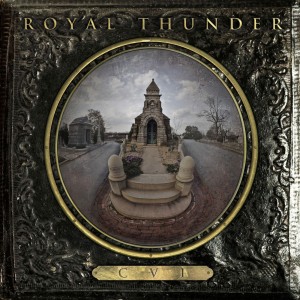 The album carries over a lone track from the EP, the beguiling “Sleeping Witch,” which starts unassumingly, but will get stuck in your head. The rest of the material is fresh, from the seemingly personal opener “Parsonz Curse” to the nine and half minute epic “Blue.”
CVI stands for the number 106 in Roman numerals for those who slept through history class. For years, Weaver said he has seen the number 106 pop up over and over – as if it’s following him.

“It’s just a number we’ve just kind of seen through the years. Just everywhere. It’s just one of those things that’s unexplainable – don’t understand it, but when we were looking for an album title it just made sense,” he said.

Weaver gives one example, telling a quick story about drawing the number 106 in line at the DMV and later taking a $106 cab ride in Hollywood. Numerous other occurrences exist as well, but we’ll leave that for the reader to discover.

Parsonz said Weaver began noticing the number after he met his best friend in fourth grade who happened to be born on Jan. 6 and was the band’s original drummer when it was only instrumental. And while his buddy’s birthday may not explain the number’s reoccurrence, the fact that Royal Thunder was once entirely instrumental explains the reason for the EP’s ambient intros and slithering build ups that force listeners to wait for the payoff, which comes in the form of Parsonz‘ brilliant voice and Weaver’s sharp composition.

And like the reoccurring number, band members tend to be cyclic in this crew. 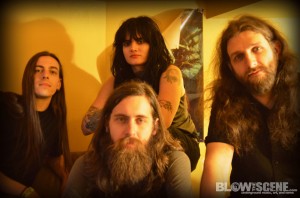 Royal Thunder’s current incantation isn’t the first time Smith shared the stage with Parsonz and Weaver either. Nearly a decade ago, the three played together in a project called Souls Unrest. Coleman said he was around at the time as well – sitting upstairs and playing Xbox while they practiced.

Years later, not long after Smith replaced Stuber, Coleman was invited to try out on bass, a move that would have allowed Parsonz to bond with the microphone and focus entirely on her scorching vocals. However, she decided to remain one with her four-string.

“She just can’t put the bass down, man,” said Coleman, who subsequently moved to rhythm guitar.

“I never intended on having another guitar player, but it just worked out so well,” said Weaver. “I did so much on the album with layering guitars that to pull it off live it just made sense.”

Given the band’s company on tour, they’ll need all the guitar firepower they can get, storming across the country with the defending rock ‘n roll champions of the universe – all the way from Burlatia, inside the planet Venus – Valient Thorr. It just so happens they’re also accompanied by Maiden-esque purveyors of wail Holy Grail as well as Aiden Thorr’s side project The Kickass, which was simply described by Coleman as a “riff salad.” 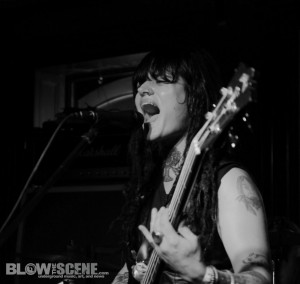 It’s plain to see why Parsonz and crew were unanimously stoked about being on this bill. Royal Thunder has supported canonic acts before, previously touring The Hull, Black Tusk, East of the Wall and Baroness, the latter of which Smith described as being “extremely humbling” to share the stage with.

Although the tour will be more than halfway over by the time the author’s arm is twisted hard enough to force him to finish this article, it must be noted that Pittsburgh was only the third stop and Royal Thunder was just starting to break the loose with the other acts.

Judging by where they slept the prior night in Huntingdon, West Virginia – the good times were just beginning. Smith said he and his bandmates were saying their goodbyes to Holy Grail when a girl overheard them talking about heading out to find a spot to flop, so she invited Royal Thunder to crash at her place. While Parsonz and Smith headed inside, the Joshes were relegated to the van thanks to cat allergies.

As Smith recalled: “After scoping out the situation the whole night at about four in the morning some guy that lived next door was out passing around a bottle of whiskey and he said ‘You guys can sleep on my roof if you want.’”

Little more than two hours of calling it quiets, Smith awoke to find himself alone on the beer can-littered roof in the wee morning hours while a crane unloaded heavy equipment from a truck across the street. He later learned Parsonz had abandoned their rooftop perch after cats began pouncing on her head at seven in the morning.

A little sleep deprivation was of little concern to Smith, who used to travel eight and a half hours back and forth from Lakeland, Fla. to Atlanta after joining late last summer following Stuber’s departure. 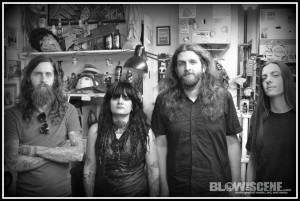 “I flew back and forth a few times and then after they wanted my ass around, basically, they let me take the van so I was driving the band vehicle up and down like twice a month for rehearsals,” Smith said. I’d come up on Friday and we’d just jam like crazy and then I’d drive back down the Florida to get back to work.”

While his bandmates responded emphatically regarding his burly former commute, Smith made it clear he wasn’t complaining by any means.

“I’m a music junkie – if I don’t have a project to play in my life is not right,” he said.

This is not just a band. This is a tight-knit group bound by years of friendship, a haunting number and masterfully crafted album. The pieces have fallen into place and it’s time to take note, folks. You can quote us on that.

Special thanks to Sean McCarthy from Jester’s Court Tattoo for letting us use his shop as make-shift photography studio.

Royal Thunder’s CIV is in stores now. Click here to purchase the album from Relapse Records. Catch Royal Thunder on tour with Valient Thorr, Holy Grail and The Kickass.