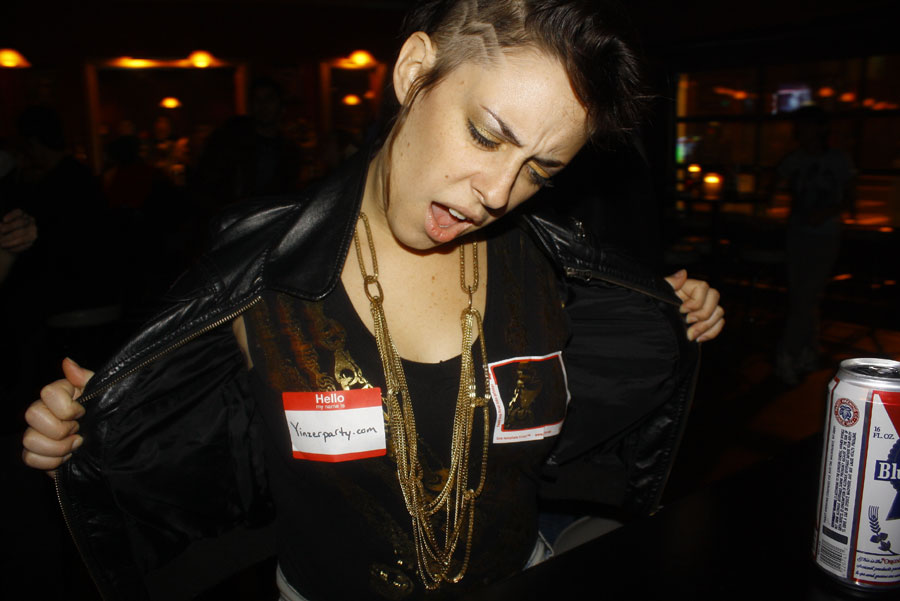 The staff at Blow The Scene loves a good party – so much so that we’ve decided to dedicate a new column about the folks who set up the parties, shows and events that give us an excuse to stay out late. Scene Stompers are the people who are out there crushing their local scene with positive party energy. This month BTS’s resident friendly giant catches up with Ashley Ryon, a real guru of gettin’ down, over a pint at the Tiki Lounge in Pittsburgh’s South Side.

If wildlife photographers think they have it hard – they should try working in the concrete jungle as a nightlife photographer. Spilled beer, dangerous dance moves and the occasional pudding wrestling matches are common place for Ashley Ryon – a nocturnal beast best known for her party photography. 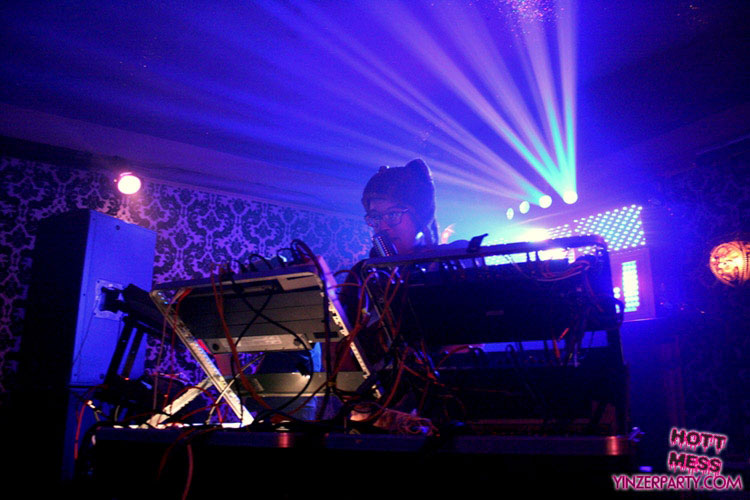 The petite Ryon is the mastermind begin the YinzerParty.com Web site. She is also the creator of a monthly indie pop dance party called Hott Mess, hosted at Pittsburgh’s hipster-mecca Brillobox, which is celebrating its one year anniversary, appropriately titled Best of Hott Mess, on Thursday, November 18th.

Since beginning the site in July 2009 – Yinzer Party has posted over 10,000 photos of the best of Pittsburgh’s underground parties and shows. She was inspired to start the site after moving to the city of steel in 2008 when she was still unfamiliar with the scene and wasn’t sure were to head to find a good time.

“Living in Vegas and New York – you go to photo sites and you see these rad looking people – you want to be there with them,” Ryon says. “[Pittsburgh] didn’t have that here. I’m a bit of an entrepreneur – I get super excited to start projects and so I started it trying to discover what’s cool in the city.”

In addition to indie parties and bar events – she has been busy shooting shows as well. Ryon has snagged images of bands such as Electric Six, The Flaming Lips, Municipal Waste, Valient Thorr, GWAR, The Bronx and Portugal the Man.

Ryon’s first exposure to the party photography came when she was living in Baltimore and was frequenting shows at Sonar back when Diplo (half of DJ act Major Lazer) would play there regularly. At the shows, she noticed a photographer taking everyone’s picture, but thought little else of it until her mug popped up somewhere unexpected.

“One day I find myself on a flyer for Sonar and I’m like ‘What the fuck is this?’” 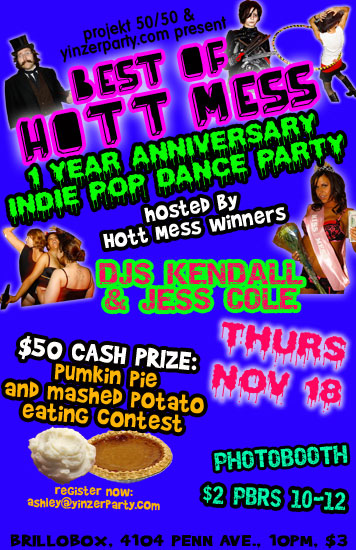 “Whatever is on that site – that’s how you know what is cool,” she says. “They’re an icon – people look to them for things.”

Yinzer Party does a fine job of balancing on the wire stretched between staying trendy and remaining down the earth. Ryon’s site is edgy, but steers away from Girls Gone Wild-style pictures found on other major party sites such as New York’s LastNightsParty.com. Yinzer Party doesn’t allow hipness to override the larger message: places to have fun.

The Web site to has also branched out from just photos – proving lists out upcoming events on the YP blog in addition to providing street style shots (YP Steez) and restaurant reviews (Hangover Brunch). Ryon has crafted a site that has become a hub for community involvement.

Her quest to connect local party hounds goes beyond her reach on the Web. Ryon is the Director of Marketing for a slew of bars such as the Tiki Lounge, the infamous Lava Lounge, the Bohemian filled Beehive Coffeehouse and the festively trashy Double Wide Grill. She is big on developing fun promotions to get people out and about to these joints. On this night she is hosting a meat raffle – that’s right – meat.

Sitting in a booth in the backroom of Tiki – Ryon looks at home. She sports thick framed glasses and all black attire. She is opinionated about her outlook on the scene, but isn’t afraid to admit her shortcomings and quirks either. In essence, Ryon is the coolest dork you could ever meet.

“I’m an oboe player!” she yells, cracking up in laugher. 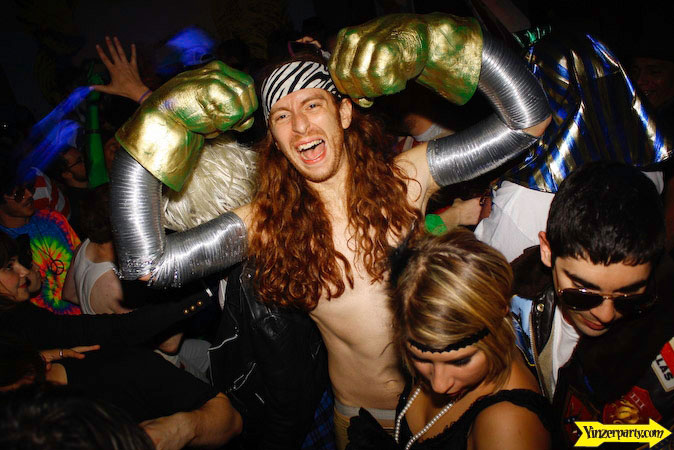 Ryon went to college for music performance and plays an instrument that embodies the antithesis of rock ‘n roll party culture. She has also been playing piano since she was young, but cites her lack of improvisational skills as the reason she hasn’t tried to play the keys for any projects.

“I’m pretty damn good at the oboe, but I’m no good if you take a piece of music away from me,” she says.

She does admit to being extraordinarily great at one thing: creating cheesy competitions.

Ryon uses goofball contests to promote Hott Mess – her monthly indie pop dance party. She says that the competitions are a great way to promote her event and to give people a chance to participate.

This month’s anniversary edition of Hott Mess will feature a pumpkin pie and mash potato eating contest sponsored by local arts group Projekt 50/50. The event will feature DJs Kendall and Jess Cole and will be graced by the past winners. 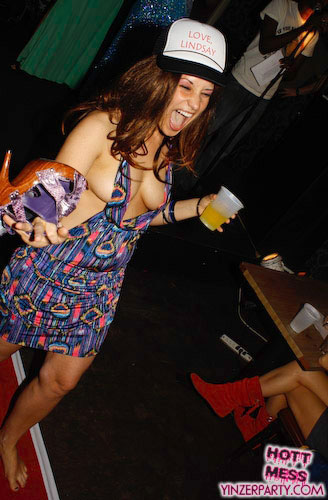 Over the past year, Hott Mess has had a mustache contest, a lip syncing competition and Ryon’s favorite – a beauty contest.

“April was my favorite Hott Mess so far,” she says. “I was working with Sneaky Mike of the Hood Gang and he wanted to have a trashy beauty contest called Miss Mess.”

The duo rounded up ten girls to take part in a three party evening wear, talent and question/answer event. According to Ryon – a fun loving broad from the South Side won with her positive party attitude – and a little nudity.

Hott Mess, which takes place on the third Thurday of every month, originally sprouted from Ryon’s desire to hear more electro-pop on the dance floor. She says she just wanted to get down to the likes Hot Chip and Passion Pit – which she wasn’t hearing enough of – so she did something about it.

“I sniffed around and got a hold of the owner of Brillobox,” she says. “I want people to have a good time and just be young and happy [that] they’re here. And he was like ‘Hell, yeah – let’s do it!’”

Hott Mess doesn’t rely on a resident DJ and features two local DJs each month whose styles vary from electropop to dubstep to oldies.

“That gives people the opportunity to DJ that wouldn’t be out there before,” Ryon says.

Her approach to Hott Mess has been to keep the format open and try new things to make sure that each month’s event is fresh. Ryon hopes that more people will give their stagnant Thursday night routine a shake-up and try something new.

“I love 80s night – but it’s OK to change it up every once in awhile,” she says, in reference to the long standing Thursday night tradition. “There’s other music in this city and different crowds of people, so explore your different options.” 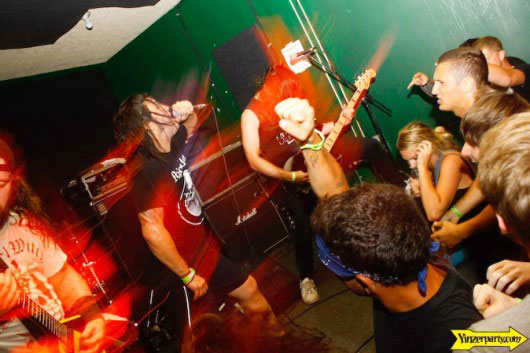 We asked Ashley to curate a collection of photos that embody Yinzer Party and Hott Mess. These dirty dozen photos are some of her favorite moments of hedonism.