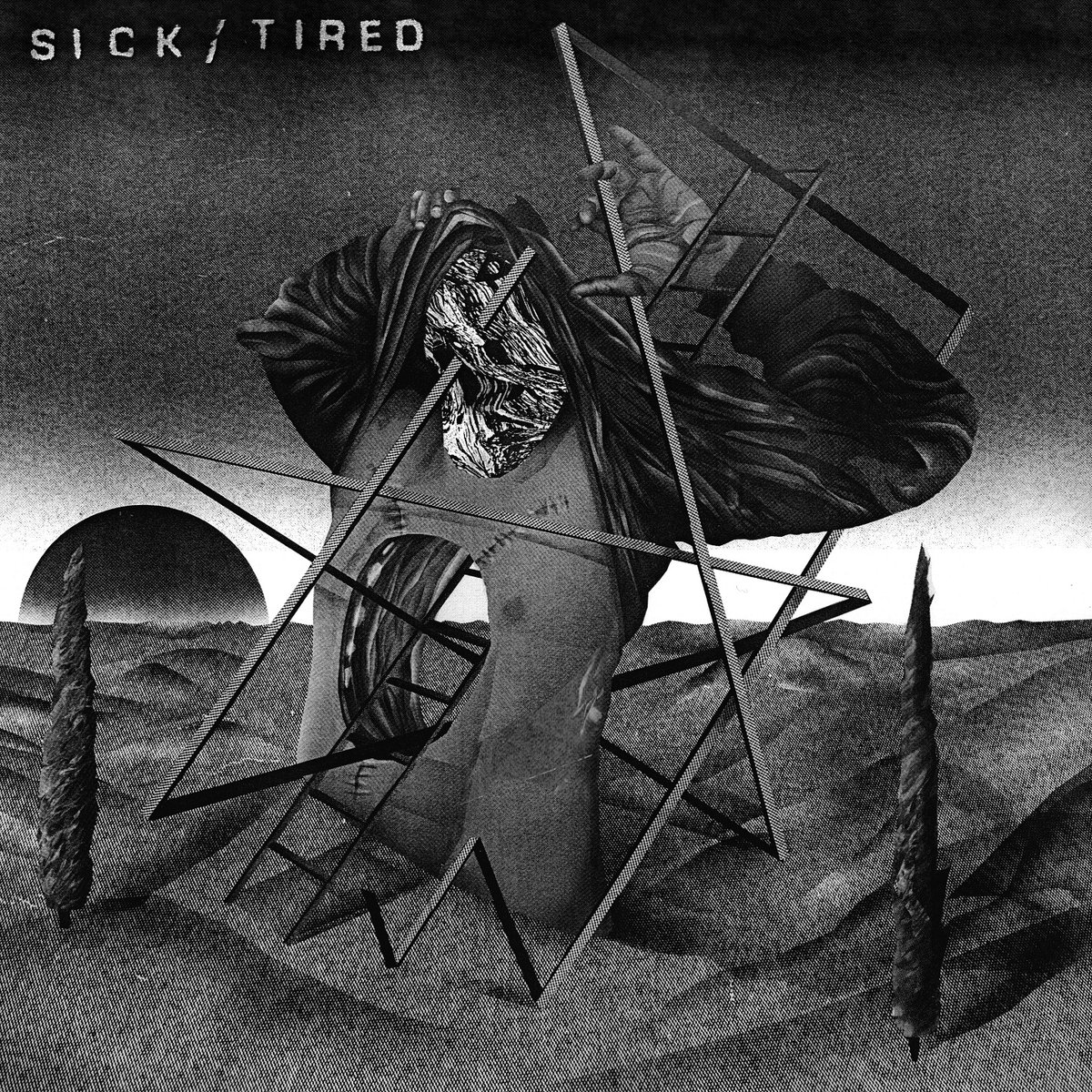 Enjoy a new interview with Chicago’s sludge-drenched grinders, Sick/Tired and bassist Kirk Syrek as the band continues to support a new LP, Dissolution that hit streets on Halloween via A389 Recordings. Dissolution is streaming in its entirety below the interview and there are additional links for further investigation and purchase. Without further ado, lets hear from Kirk.

Joshua BTS: I’d like to hone in on your newly released LP, Dissolution, that hit streets on Halloween via A389 Recordings. We love the record here at BTS. Raw, meaty grind and metal with dashes of powerviolence, and a Chicago-hardcore feel underlying, plus noise tracks by Merzbow and Marhaug– This LP is one of our favorites of 2014. Sick/Tired is a band that remains steadily prolific with new material seemingly coming down the pipeline at all times. What did the songwriting process entail throughout the crafting of Dissolution? Do you have a main songwriter that directs the album or do you all contribute equally?

Kirk Sick/Tired: We all tend to contribute to the songwriting which I think is why we sound so unique. Sometimes it can be all over the place, but that’s one of the things that makes us stand out. We’ve been described as a sludge band that plays at 1000 miles per hour. Seems like a fitting description.

Joshua BTS: When did the writing sessions for Dissolution begin? I understand you shifted around some members for the writing of this material? What led to this shift?

Kirk Sick/Tired: We actually didn’t shift anyone for Dissolution. Our vocalist Adam Jennings joined late 2011 or early 2012. I don’t remember exactly when. Our last 5 releases have had the exact same line up. Joshua BTS: How did the colab with Merzbow and Marhaug come to be? How did you work those contributions into the record? Was there a lot of back and forth or did they just kind of hand over the cuts like ‘here ya go, yours now!’

Kirk Sick/Tired: Jennings has been doing his noise project Winters in Osaka since 2003. He is well known in the noise scene. He has collaborated with many artists like Brutal Truth, Bastard Noise, Machetazo, & Chris Dodge to name a few. Because of this he asked Merzbow & Marhaug if they would be interested in working with us and they agreed. He is going to be doing a noise battle vs the singer of Gauze during the S.O.B. show in Japan in November. It will be legendary. I hope there is video as I cannot attend.

Joshua BTS: Where did you choose to record and master the music and vocals for Dissolution? I must say- The production and engineering efforts really fit the mood and delivery perfectly. Do you play an active part in the engineering and mastering processes?

Kirk Sick/Tired: Dennis from Bongripper recorded us live in their practice space. It was then sent to Developing Nations in Baltimore where Kevin from Triac mixed it down. Mastering with Audiosiege is what made it sound so crucial as Brad is a wizard. Basically everything was handled by people that understand exactly how we want to sound. All 3 of those guys knocked it out of the park for us and pushed it into the red.

Joshua BTS: Please give us an equipment overview for the Dissolution sessions. Any special or unique pieces of equipment employed in studio during the recording? Any special pedals, heads, cabinets, drums, mics, or like that you experimented with or found to be pivotal to the overall sound of the album?

Kirk Sick/Tired: We have a bass heavy sound. The bass is just as loud as the guitar in our mix typically. All of these “Scion/ Relapse” sounding bands are too clean for us….like 6 overproduced guitar tracks and no bass tone. I use the Orange Terror Bass and Death by Audio Fuzz War. It is the perfect mix of grit, fuzz, and clarity. Joshua BTS: Was there anything during the recording sessions of Dissolution that saw you step out of your comfort zone and try techniques you had not attempted before? If so- what were some of those techniques or approaches?

Kirk Sick/Tired: Not really. I mean for this one we wanted to write more memorable riffs and time changes so there is a bit more clarity. Our last LP was mainly just disgusting blasts. Dissolution is filthy sounding, but you can hear some really big riffs which is sick.

Joshua BTS: I understand much of the lyrical content is based around the passing of your vocalist’s grandfather. Did the severity of the theme see any changes in the way you approached vocal sessions or associated other motifs within the release including the artwork and album name?

Kirk Sick/Tired: Jennings recorded his vocal tracks and then I immediately drove him to his Grandfathers funeral. The entire session was fucking DARK. You can tell by listening to him. Very bleak and bitter cold.

Joshua BTS: Does the cover-art of Dissolution hold any significance in context with the lyrical motifs on the record? Also- Who crafted the cover art?

Kirk Sick/Tired: Dan Rossiter does the majority of our artwork. He is a total weirdo so he’s a perfect fit. Everything he does for us is handmade using transparencies and photocopies that he cuts out and then manipulates. The title “Dissolution” has way more significance and meaning to my life than the actual cover art itself.

Joshua BTS: How did you come to originally link up with A389 Recordings? How do you feel about the working relationship thus far?

Kirk Sick/Tired: Dom emailed us and asked if we wanted to do a record on A389 and that was that. It has been an amazing experience to work with a label that cares so much about the bands and puts so much work/time/money into all of its releases. There was a point where I was so frustrated with the mix I wanted to tell A389 to get fucked, but Dom stood by us and pushed us to make our record the best it could possibly be with his advice, criticism, and persistence. I hope he will ask us to do another project with him in the future. We have talked about a possible discography CD, but I’d like to do new material on A389 at some point. Joshua BTS: What bands both here and abroad have your attention right now?

Kirk Sick/Tired: Disrotted from Chicago. They are unreal Corrupted worshiping sludge. We recently played Bloodshed Fest in Holland with Brutal Blues from Norway and Controlled Existence from Czech Republic. Water Torture from NY will always be special to me. The Midwest blast scene is so sick right now…Nakay, Pizza Hi Five, Sea of Shit, Mellow Harsher, Lt Dan, Cloud Rat, Agitate, Faction Disaster…there are just too many to name, but the Midwest is killing it right now.

Joshua BTS: Apart from your musical endeavors- Do any of your members dabble in any other arts or hobbies?

Joshua BTS: When you are not busy with Sick/Tired– How do you spend your time?

Kirk Sick/Tired: I am in another band called Pillage with old friends from Los Crudos, Charles Bronson, & Loser Life. It is more straightforward Siege inspired hardcore. We all do multiple bands.

Joshua BTS: What does Sick/Tired have planned as we head into 2015?

Kirk Sick/Tired: Our next project is going to be a split LP w/ Sea of Shit. The plan is to record for that in January. We just got back from Europe so we really want to go to Japan or Brazil next. It’s too early to tell. We are going to play the Haunted Hotel anniversary show this Feb in NYC, but unfortunately it hasn’t been announced yet so I can’t say who all is playing. The headliner is going to be amazing.

Joshua BTS: Thank you kindly for taking a few moments with Blow The Scene readers from around the World as we look forward to hearing and seeing more from Sick/Tired.. Any final thoughts before we sign off?

Kirk Sick/Tired: If you want to listen to this noisy bullshit, do it here: https://sick-tired.bandcamp.com/