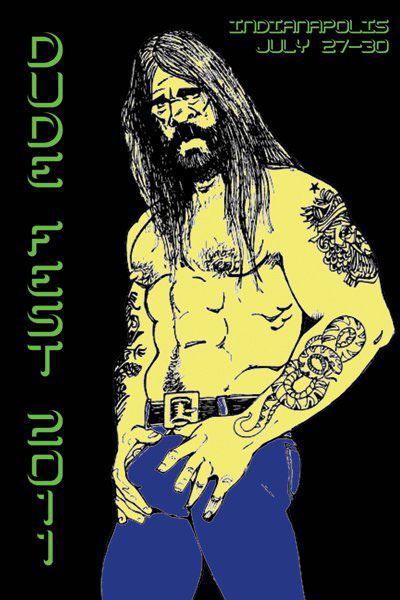 For those not familiar with the hardcore scene of the Midwest, allow us to introduce you to one of the raddest underground annual fests in the US; Dude Fest. Since its inception in 2003, Indianapolis’s Dude Fest has featured over 400 bands with an emphasis on quality underground acts. With no ambitions of becoming another corporate turd, with cookie-cutter metal acts and the influence of washed-up booking agents, the annual event maintains its integrity due to the efforts of Dude Fest founder and organizer, Derek Black. We recently caught up with Mr. Black for the inside skinny on the fest and what fans can expect from the 4-day edition of Dude Fest 2011. Without further ado, lets here from The Dude.

Joshua BTS: Greetings! Thank you for taking some time today with Blow The Scene readers from around the world. You run one of the most “buzz-worthy” extreme music fests in the US. I understand that the motivation behind Dude Fest was spurred on somewhat of whim during the winter of 2002 with the idea of getting a fest together to see bands of friends who were spread out all over the country. Dude Fest has had quite a running history since then. Have your motivations for running the fest remained the same?

Derek Black: Yeah, the impetus to do the fest hasn’t really changed. I have so much fun at the fest every year, it would be ridiculous to not stick to the same formula. With the fest gaining some notoriety, I have been able to book a few bands I really liked, but didn’t know on a personal level. Last year, I was able to get Arab on Radar to play, who were always one of my favorite bands. Being able to book Pig Destroyer and Portraits of Past were right up there with that experience as well. This year, I managed to convince Dropdead to come play, and I couldn’t be any more excited! For the most part, the fest still serves as a vehicle to make my friends from far away come to Indiana to hang out for a day or two.

Joshua BTS: One of the many aspects of Dude Fest that I find particularly appealing is your consistent willingness to showcase up-and-coming bands as much as the more established acts who partake in the yearly fest. Do you feel Dude Fest attendees are receptive to these lesser known bands? It would appear showcasing the up-and-comers has become a staple of Dude Fest.

Derek Black: It seems like anyone that makes it to the fest generally has a great time in general. So, the attendees are pretty receptive to anything going on. I’ve had plenty of people tell me that dude fest was the first time they ever heard a lot of their favorite bands, and plenty of people in the bands playing get introduced to bands they wouldn’t normally hear or play with. I was just talking to Haroldo from Capitalist Casualties, and he mentioned how awesome it was to see the band Tombs at the fest some years back. I really don’t have any clue as to what bands are going to be “up and coming” though. I just book bands that I like with people in them that I think are cool. Most of the contact I have with bands through the years comes from booking house shows in Indianapolis and from playing out around the country with my bands. I don’t really have to look very far or hard to fill up the fest with 20-30 killer bands every year. 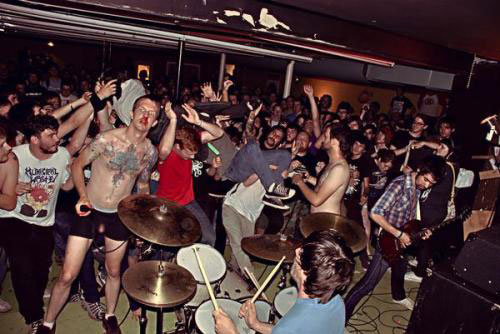 Joshua BTS: What is story behind the name Dude Fest?

Derek Black: I just thought it was an apt name to call something where inevitably a bunch of dudes would be hanging out.

Joshua BTS: This is the first year Dude Fest is running for 4 nights. Rad! What brought about the decision to have the fest run longer than years past?

Derek Black: It really wasn’t what I wanted at all actually. It’s from the ills of having to deal with booking agents. I generally don’t deal with them at all, but sometimes it’s a necessary hassle. I thought I had a date on the Torche, Big Business, Helms Alee, tour that was going to be on a Friday, but 2 months after initial contact, that turned into a Wednesday. I’d already had Dropdead, 70000 Dying Rats, and a few other bands confirmed for July 30th at that point, so I decided to make due with what I had, and string a fest together than spanned from Wednesday to Saturday. I’m very pleased with how things turned out though, and I think it will be a very good time!

Joshua BTS:We often find that show organizers/promoters are multi-talented with interests in several different niches of the art world. Apart from organizing and running Dude Fest, do you have any personal artistic outlets or musical projects?

Derek Black:I’ve always played in a bunch of bands throughout my life. This year 2 of my bands are playing at the fest. I play bass in a band called Still, and I do vocals for Phoenix Bodies. As far as “the art world” is concerned though, I don’t consider myself a part of that. I make dumb flyers and I play stupid loud caveman music. I’m hardly an artist.

Joshua BTS: For our readers who may be thinking of taking the plunge into organizing a fest, what advice would you offer?

Derek Black: Have a good reason to do it, and don’t fuck around. Don’t book any bands you don’t want to see. Don’t be afraid to tell people “no”. Stress quality over quantity; don’t be afraid to start small. I think this is what keeps all the good fests going. I know people that help organize Krazy Fest, Chaos in Tejas, The Fest, and Best Friends Day, and we all pretty much have the same mentality when it comes to putting together a fest. Just get a hold of bands we like on a personal level, and bands we would really like to see, and let it go from there. There’s no reason to worry about getting some “big name” band that you don’t really care about to come and play. Chances are, they are just going to clash with everything else you’re trying to put together, and make for an awkward time for everyone. Just don’t bother pandering to the public. Keep it punk, and do it for whatever reasons you’ve got.

Joshua BTS: Do you have any plans of trying to expand Dude Fest into a tour or hosting in multiple locations?

Joshua BTS: What do you find to be the most enjoyable aspects of running Dude Fest?

Derek Black: I really just like watching all of the silly stuff that happens. Watching people throw a 10 foot long stuffed purple dinosaur at Pig Destroyer is one of the funniest things I’ve seen happen in my life, but not nearly as funny as Hewhocorrupts leading a naked circle pit around the outside of the entire building of the fest in 2005. Dude Fest is such a great time year after year. Everyone that comes always seems to have one of the best weekends of their year at the fest. Sure, you get to see some awesome bands, but you also get to hang out with so many cool people from all over the world. It’s impossible to have a bad time at Dude Fest. 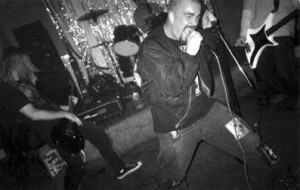 Joshua BTS: What are the most stressful aspects of running Dude Fest?

Derek Black: I don’t get stressed too easily. I guess I can really just say I only get stressed out when things aren’t running on time, but the fest is usually always right on schedule. I do get kind of mad when people, equipment, or whatever aren’t in their proper place at their proper time. The sheer amount of phone calls and text messages I get while the fest is going on is absurd. It’s a juggling act to get everyone, everything they need while the fest is going on. Honestly, I am pretty good at taking everything in stride, and getting problems solved fast, so there’s not a ton of stress.

Joshua BTS: From year to year, do you notice a shift in the attendees? Do you see a variety of concert-goers?

Derek Black: Things always change a little every year, but I’m glad that a lot of the same people keep coming year after year. I’m trying to do my best to weed out the “old metal dude” crowd. I don’t like it when redneck guys are yelling at girls to show them their tits or anything like that. Putting pictures of naked men on everything promoting the fest usually does a good job at curtailing that aspect. The fest is pretty much always a big group of people excited about new, loud, fun music that are looking to have a good time. This usually means it’s full of friendly, positive, respectful people. I couldn’t ask for anything better.

Joshua BTS: Apart from the musical happenings at Dude Fest, what else is there for concert-goers to get into? Are there grassroots organizations supporting current issues or other extra-curricular activities going down during this 4-day extravaganza?

Derek Black: Well, the whole fest is a benefit for a local DIY collective venue in Indianapolis called The Dojo. Other than trying to raise money to upgrade that place, to be the best small all ages venue that it can be, there’s not much going on at the fest besides bands playing. This fest is basically a one-man operation, and I don’t have time to attach many extracurriculars to it. If anyone ever got a hold of me about tabling, doing workshops, or whatever, I’d be receptive, but no one ever really comes to me with any good ideas for such things.

Joshua BTS: Apart from your musical interests, what does your day-to-day look like?

Derek Black: I have a standard 9-5 job as a knowledge engineer. I work at a software company and teach computers how to do math, chemistry, and physics. I love my job, and it’s something that I look forward to doing almost every day. Everyone that knows me, understands there’s pretty much nothing I love more than science. This is something I mean in a very sincere way. I’m not fond of art history students who make pseudo intellectual statements about “quantum theory”. I went to school for physics and math, and I love reading about new advances in
those subjects as well as biology and chemistry. I also really love swimming and dancing to dumb loud music with my friends. I have all the other typical hobbies like cooking and riding bikes. You can fill in the blanks with whatever you want. I mostly spend all my time working and booking shows for bands.

Joshua BTS:Any band or aspect of Dude Fest that you are particularly looking forward to this year?

Derek Black: I’m really excited about the venue for this year’s fest. It’s a really small fun place, and actually somewhat close to civilization this year. Once again, it’s not in the greatest neighborhood, but it is located in an up-and-coming hub for arts and nightlife. There’s restaurants worth eating at within walking distance and it’s only a few minutes drive from downtown Indianapolis. This will make for a more comfortable, and more fun atmosphere.

Joshua BTS: Do you see yourself running Dude Fest for years to come?

Joshua BTS: Thanks again for taking with Blow The Scene! Any final thoughts or comments?

Derek Black: I’ve got nothing really. I hope my answers were satisfactory, and I hope people have a great time at this fest and the next 491 of them.

DUDE FEST 2011 – Get tickets at FestDude.com