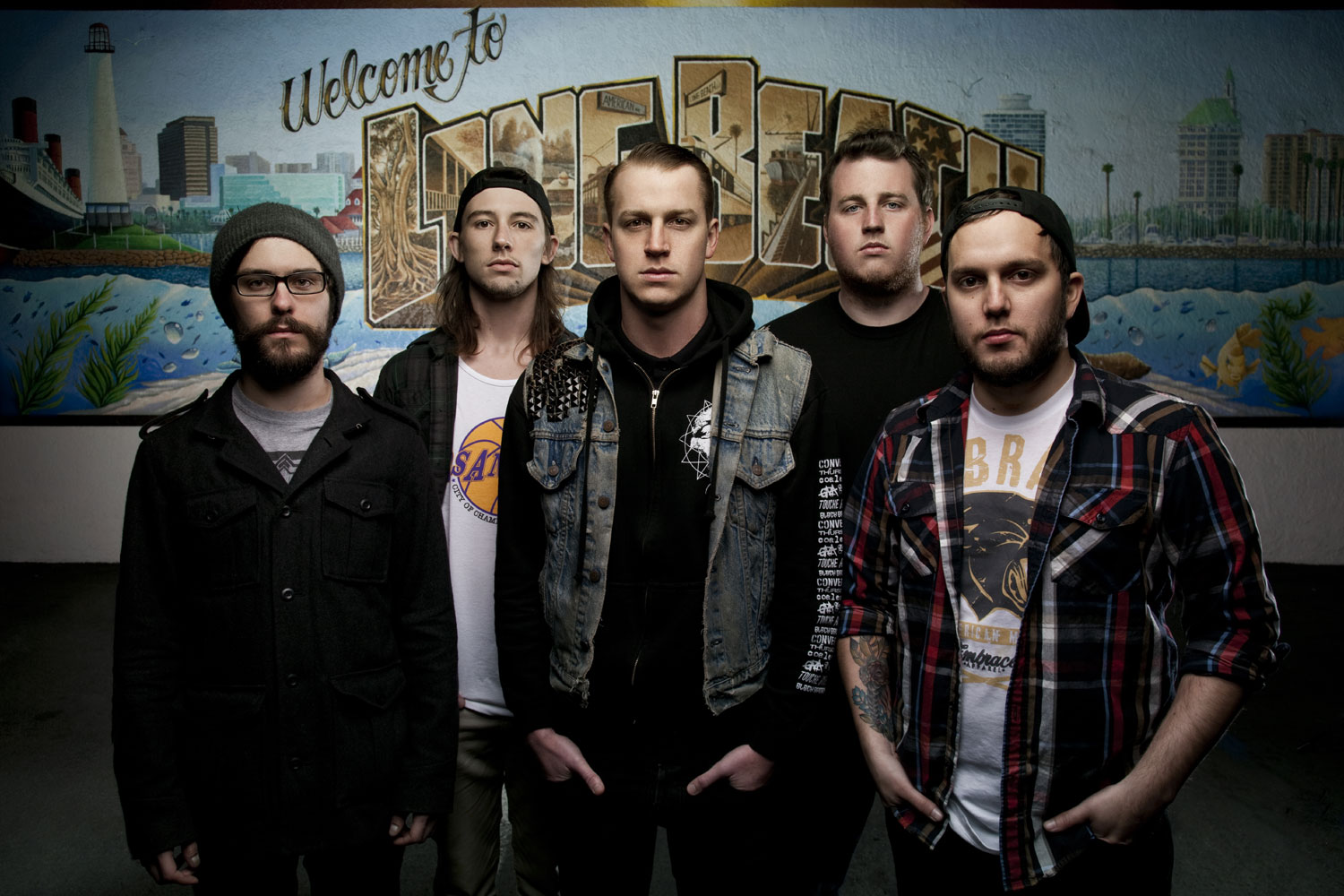 Last week, Long Beach CA’s snotty metallic-rockers, The Greenery, announced signing to Prosthetic Records as they track a new full-length record with Paul Minor at BuzzBomb studios. Their infectious blend of metallic punk-rock has drawn comparisons to Every Time I Die, The Bronx, and The Stitches. Blow The Scene’s Joshua Cohen caught up with The Greenery guitarist Derek, as he discusses the writing process for the new record, equipment picks, life in Snoop’s backyard, tour stories, and more in this in-depth interview exclusive.

Joshua BTS: Ahoy! Thank you for taking some time to answer a few questions for Blow The Scene readers around the World. Let’s begin by having you introduce yourself and declare your weapon of choice with So Cal’s dirty rock n’ roll practitioners, The Greenery.

Derek (The Greenery): Hey What’s up Josh! My name is Derek and I play the guitar for The Greenery or at least attempt to….

Derek (The Greenery): We actually had the pleasure of being apart of Transmission Fest in Hartford,CT and Worcester,MA this summer and we met our management and this insane dude named Scott Lee that was absolutely cool as hell. Somehow word started going around about how retarded we were and Prosthetic ended up throwing us an email during tour. We just knew off the bat that they would be perfect for us, and now we’re bonded by blood with those righteous dudes.

Joshua BTS: We understand you are recording your Prosthetic debut right now with Paul Minor at BuzzBomb Studios. How is tracking going thus far? And what is it like recording with Paul?

Derek (The Greenery): It’s actually been amazing so far, We haven’t had a whole lot of time to record so the urgency of the recording process is making it a very raw and intimate situation for us. Paul likes coffee as much as we do so we clicked immediately and he has our childish humor, so it’s been a great chemistry.

Joshua BTS: How does The Greenery approach the writing process? Do you all chip in, or is there a captain at the helm steering the boat? And how long have you been compiling material for this forthcoming release on Prosthetic?

Derek (The Greenery): We’ll when I think about it everyone is always helping write. I mean sometimes I come with a skeleton or Mike [second guitar] does and we start just working off one another and creating something we can all really feel out. It’s an awesome process and writing this album has been the funnest experience working cohesively with all these dudes and they all feel the same. 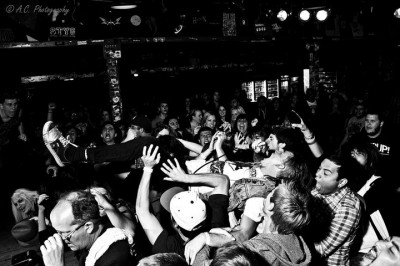 Joshua BTS: Can you touch on some of the lyrical themes for the new record? Tapping into any uncharted territory or stepping out of the comfort range?

Derek (The Greenery): It’s got a lot of different ranges from personal conflict to even one of our favorite past times — Skateboarding. Honestly, we’ve never tried to theme our ideas. We’ve always just went with what makes sense at the time. Our process is about being true to any genuine emotion we could feel at the moment. It’s not entirely out of our realm of writing in the past, but it’s a lot more diverse.

Derek (The Greenery): Well I have an older Marshall JCM 900 that’s never let me down. I absolutely love that head and so did Paul, but we worked with a VHT pitbull with The Marshalls and just cranked the shit as loud as we could. That’s about it haha.

Joshua BTS: We understand you share stomping grounds with none other than Snoop Dogg. How is the music scene at Long Beach these days? Any Local bands have your attention?

Derek (The Greenery): Yeah there are a lot of upcoming bands in the area one that’s really had us stoked is Joyce Manor, but I’m not 100% sure if they’re from LB but they play around here a lot and they’re a great band. There is a great place for house shows in our area that has shows consistently, but honestly there aren’t that many venues in Long Beach for All Ages Hardcore/Metal/Punk/Indie shows.

Joshua BTS: The Greenery will be out later this month on the Road to Metal Fest Tour, along with Lionheart, Legend, The Great Commission and Monsters. Nice line-up. What should fans expect from The Greenery with this run? Breaking out and new jams or dusting off any classic tracks?

Derek (The Greenery): Actually yeah we will be playing two new tracks off of our upcoming album, we’re extremely stoked to be playing these new jams. They’re a great way to let people know whats coming soon, ya feel me??

Joshua BTS: Share with us a little history behind The Greenery. I understand many of the members worked with other projects before coming together with your current line-up. And take us up to the current players if you would.

Derek (The Greenery): Yeah. I am originally from Texas, and I played guitar for a touring band called Twelve Gauge Valentine for a short while when I was younger. It’s almost still the same original line up sept for a drum and guitar change, but other than that most of these guys have played in the same bands together since high school. Our new drummer Zack “DK MODE” Smith used to be in a local band called Carry The Sirens.

Derek (The Greenery): Corrosion of Conformity – Eye for An Eye

Joshua BTS: Best TV cartoon show of the 80s and why?

Derek (The Greenery): Teenage Mutant Ninja Turtles Tv Series, I seriously thought having a shell, living in a sewer, eating pizza, and shredding on skateboard with a wise rat was badass…. wait still is.

Joshua BTS: The Greenery infuses elements of punk, metal, hardcore, and rock into a coherent amalgamation of shred. Who are some of your main influences?

Derek (The Greenery): A lot of the stuff we are writing now had us get stoked on some bands we started listening to as young kids. Suicidal Tendencies, Metallica and honestly my father loved metal so I grew up listening to Slayer, Exodus, Metallica, Testament and just thrash-metal in general. So it all made sense in the end. 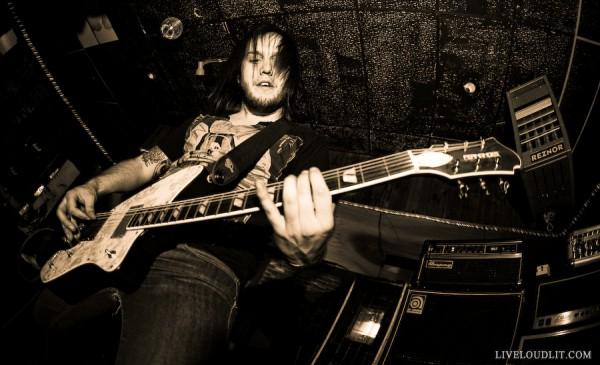 Joshua BTS: We LOVE hearing about whacked out tour stories and the odd touring habits of the bands we interview on blow the scene. How does the Greenery rank in the odd tour habits category? Whether its dingle-berry collections in the van ashtrays or iced-t bottle collections of urine – we want to hear about!

Derek (The Greenery): Well our singer Matt can piss in a bottle on command in the van.. seriously that’s his one amazing talent. Brandon can smoke more cigarettes then any other human on earth. I wish we had weird habits, we’re pretty normal dudes in the van. Our older drummer cannonballed into 100 catfish off a pier in South Carolina. A lot of fireworks get blown up, we’ve broken windows in our van due to stupidity. Oh yeah, when it’s hot, we make a point to go guerrilla-tactic-swimming in random motel/hotels, and scare the hell out of people.

Joshua BTS: What is your most memorable live experience in recent memory?

Derek (The Greenery): Playing a sold out show at Chain Reaction (..well it wasn’t sold out for us haha). Having people singing our songs and probably committing more nasty stage dives unto innocent people for the entire night. .. We always get a kick out of being the odd band out.

Joshua BTS: How is the latter part of 2011 shaping up for The Greenery? I’m sure our European readers would like to know if you will be heading their way soon.

Derek (The Greenery): We would absolutely love to go across the pond. We hope that there is plans for it in the next year, but other then that a lot of touring and releasing our debut album in late summer we hope!

Joshua BTS: Thank you for taking time with Blow The Scene today! We look forward to keeping up with your future endeavors. Any final thoughts?

Derek (The Greenery): Yeah! we just want to make sure everyone is stoked about music for the right reasons if it wasn’t for good times and genuinely acting a fool then I’m sure we wouldn’t feel like we are doing this for the right reasons and it’s our fans/friends that make every moment absolutely worth it! Party On!